During last ten years the phase of development of new antimicrobial drugs has slowed down while the prevalence of resistance bacteria is no longer matched by expansion in the arsenal of agents 7. Many efforts have been done to discover new antimicrobial compounds from various kinds of sources such as soil, micro organisms, animals and plants. One of such resources is folk medicine and systematic screening of them may result in the discovery of novel effective compounds 8. There are several reports on the antimicrobial activity of different herbal extracts in different regions of the world 9-12. Because of the side effects and the resistance that pathogenic microorganisms build against antibiotics, recently much attention has been paid to extracts and biologically active compounds isolated from plant species used in herbal medicine 13.

Considering the aforesaid, one of the traditionally used medicinal plants belonging was screened for their antimicrobial properties, Sphaeranthus indicus which belongs to Asteraceae family. It is used in homeopathic medicine for the treatment of insomnia, epilepsy, tetanus, muscle spasms and leaves presented anxiolytic activity 14, 15. Sphaerathus indicus Linn is an annual spreading herb used to treat hemicraniasis 16, jaundice, diabetes, hernia, haemorrhoids, helmenthiasis, skin diseases, nervine tonic etc. The bark ground and mixed with whey, is said to be useful in treating piles. Leaf juice is boiled with milk and sugar-candy and prescribed for cough. An aqueous extract of the whole plant was slightly toxic to American cockroaches 17. Sphaeranthus indicus was found to possess powerful medicinal properties to cure skin infections, diseases of the liver, jaundice, bronchitis. In view of the medicinal importance of Sphaeranthus indicus in the indigenous system, it was decided to work on the phytochemistry and antimicrobial investigations on Sphaeranthus indicus Linn.

Site and Year of Experimentation: Experiment conducted at Amrita School of Pharmacy, Amrita Vishwavidyapeetham University and Atlac Lab in April 2009.

Collection and identification of plant material: The whole plant was collected from the wet lands of Kozhikode Dist of Kerala in the month of September. The plant was identified and confirmed by a taxonomist; a voucher specimen was deposited at the herbarium in the institute.

Preparation of plant extracts: The whole plant including the flower heads was shade dried and coarsely powdered with electric blender. The powdered drug passed through sieve number 40 to obtain uniform powder and packed in airtight sealed envelopes for further studies. Then it was extracted by maceration at room temperature for 7 days with regular stirring after every 2 hrs in the order of increasing polarity with hexane, chloroform, ethyl acetate, methanol, ethanol and water.  The extracts were collected and concentrated at 40oC under reduced pressure using rotary evaporator. The extract was stored at 4ºC until further use for various evaluations. These extracts were used to conduct the phytochemical and pharmacological evaluation of Sphaeranthus indicus.

Inoculum: The microorganisms were inoculated into SBCB and incubated at 35±20 C for 4 hrs. The turbidity of the resulting suspension was diluted with SBCB to match with 1 McFarland turbidity standard. This level of turbidity is equivalent to approximately 3.0 × 108 CFU/ml.

Agar well diffusion method: The modified agar well diffusion method was employed 22.Muller-Hinton agar plates were inoculated by streaking the swab over the entire sterile over the entire sterile agar surface. This procedure was repeated by streaking two more times, rotating the plate approximately 60° each time to ensure even distribution of the inoculum. As a final step the rim of the agar was also swabbed. After allowing the inoculum to dry at room temperature, 6-mm-diameter wells were bored in the agar.

Each extract was check for antimicrobial activity by introducing 100µL of 4000µg/ml concentration into triplicate wells. Simultaneously, Gentamycin sulfate and Nystatin were used as positive control at a concentration of 1µg/ml. and the dilution medium for the positive control was respective solvents. The plates were allowed to stand at room temperature for 1 hour for extract to diffuse into the agar and then they were incubated at 35±2°C for 24 hr. 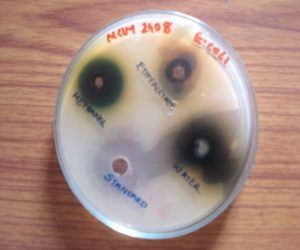 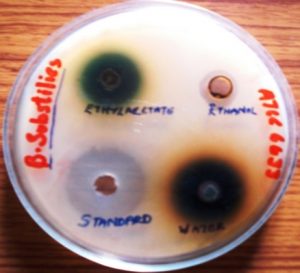 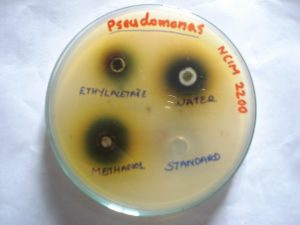 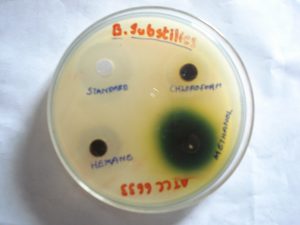 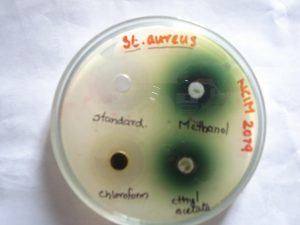 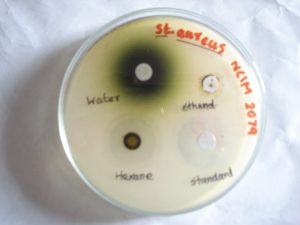