INTRODUCTION: India is a mega-biodiversity country, which is not only rich in medicinal plant resource, but also rich in traditional knowledge about such medicinal plants. There are several studies to prove the presence of various bioactivities and bioactive compounds in Orchidaeae plants. Nervilia is a genus of orchid with about 65 species among them 16 occurring in India.

Among the 16 species Nervilia aragoana has subjected to various studies and the plant is commonly known as Orilathamara. But in many part of the country traditional healers use other species of Nervilia such as Nervilia crociformis, Nervilia plicata and Habernaria diphylla were used instead of N. aragoana.

In Sanskrit the drug Padmacarini is reported hot, bitter and astringent 1. It overcomes morbid kapha and vatha and cures dysuria, urinary calculi, cough and asthma 2. According to Rajanikhandu the drug is aromatic and it cures vomiting, epilepsy, diarrhoea, diabetis 3. The Padmacarini is a constituent drug of Priyangvadi gana of Vagbhada. Vastyamayantaka ghrtam, Satavaryadi ghrtam and Matsyakhyadi kashaya etc. are some of the preparations using the drug 4, 16. Most of the literature has illustrated the padmacarini as Hybanthus enneaspermus and Habernaria grandiflora. Traditional healers and ayurvedic physicians of Kerala have considered the single leafed plants orilathamara is same as padmacarini and they used the plants Nervilia crociformis, Nervilia plicata and Habernaria diphylla as padmacarini. The present study aims at qualitative and quantitative phytochemical screening with special reference to the antioxidant and antibacterial properties of the plant Nervilia crociformis which is known as padmacarini in Sanskrit and a closely related species Nervilia infundibulifolia whole plant extracts.

Indian species of Nervilia infundibulifolia have not yet been subjected to such phytochemical screening to understand the medicinal values. The selected plants were belonging to the family Orchidaceae. The plants have a single leaf and are ground hugging in case of N. crociformis and small and with reddish patches in case of N. infundibulifolia. These plants have a fleshy flower stem with only one flower and a leaf which arises later at the base of the dying flower stem. The flowers of the plants appear soon after the first heavy rain in monsoon season.

Preparation of Extracts: The whole plants of N. crociformis and N. infundibulifolia were collected from Kasargod District, Kerala, India. The plants were identified in department of PG studies and research in botany, Sir Syed College, Taliparamba. The collected plants were washed thoroughly with tap water followed by distilled water for the removal of dust and soil particles, cut into pieces and shade dried at room temperature for 15 days then coarsely powdered using Panasonic Mixer and used for extraction. The powder (20 gm) was extracted with petroleum ether, chloroform, ethanol in a Soxhlet apparatus (3840; Borosil Glass works Ltd., Mumbai, India)  and finally the dried powder was macerated using water with constant stirring for 48 h using the orbital shaker (Rivotek; Riviera Glass Pvt., Ltd., Mumbai, India) and the extract was filtered. The extracts were concentrated using a rotary evaporator and stored at -20 ºC in the deep freezer (RQV- 300; plus, REMI electro technik Ltd., Thane, Maharashtra, India) for further analysis. Quantitative analysis and antioxidant assays were done by dissolving 1 mg extract in 1 ml respective solvent. Antimicrobial study was done with well diffusion method by dissolving 1 mg extract in 1 ml DMSO.

Qualitative Phytochemical Screening: For preliminary phytochemical screening, plant extracts of the whole plants of N. crociformis and N. infundibulifolia was subjected to various qualitative chemical tests to determine the presence of phyto-constituents like glycosides, tannins, phytosterols, proteins, amino acids, carbohydrates, flavonoids, phenolic compounds, oils and fats, and saponins 5. Total carbohydrate content of the selected plants was done by anthrone method 6. The total phenolics of the different plant extracts were determined according to the method described by Makkar 7. The flavonoid contents of all the extracts were quantified according to the method described by Zhishen, et al. 8

In-vitro Antioxidant Assays: Two different assays including free radical scavenging DPPH assay and Phosphomolybdenum assay were used to evaluate the antioxidant potential of the selected plants. Each experiment was done in triplicate and mean values were taken. The antioxidant activity of the extract was determined in terms of hydrogen donating or radical scavenging ability using the stable radical DPPH, according to the method of Braca et al. 9, 10 The antioxidant activity of samples was evaluated by the green phospho-molybdenum complex formation according to the method of Prieto et al. 11

The agar well diffusion method was employed for the determination of antimicrobial activities of the selected plants. A suspension of the tested bacteria (0.1 mL of 1 × 108 cells/mL) was spread on the solid media plates. Wells of approximately 10 mm was bored using a well cutter and sample of 25, 50, and 100 µg concentrations were added. After staying at 4 ºC for 2 h, the plates were incubated at 37 ºC for 24 h. The antibacterial activity was assayed by measuring the diameter of the inhibition zone formed around the well (NCCLS, 1993) in centimetres. Streptomycin was used as a positive control with the tested bacteria. In order to access the biological significance and ability of the sample, the antifungal activity was determined by Agar well diffusion method. Potato Dextrose agar plates were prepared and overnight grown species of fungus, Aspergillus niger was swabbed. Wells of approximately 10 mm was bored using a well cutter and samples of different concentration was added; the zone of inhibition was measured after overnight incubation and compared with that of standard antimycotic (Clotrimazole). 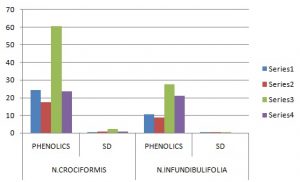 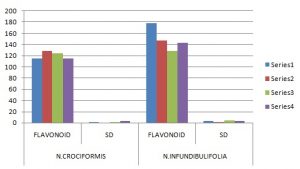 Antioxidant Assays: In present study, the 4 extracts of N. crociformis and N. infundibulifolia were investigated for antioxidant potential by using three different methods. All extracts showed antioxidant activity up to varying extent.

Based on the demonstrated results the crude extract of Nervilia crociformis can be categories as more free radical scavenging activity than Nervilia infundibulifolia. Basically, a higher DPPH radical-scavenging activity is associated with a lower IC50 value. 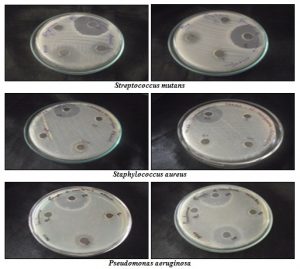 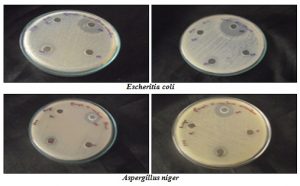 TABLE 9: ZONE OF INHIBITION OF N. CROCIFORMIS CHLOROFORM AND ETHANOL EXTRACT AGAINST A. NIGER

The present study investigated the in-vitro antibacterial and antifungal activity of two different solvent extracts in Nervilia crociformis whole plant sample against four different strains of bacteria like E. coli, Pseudomonas aeroginosa, Staphylococcus aureus, Streptococcus mutans and a fungal strain Aspergillus niger. The potency of the extracts and their antibacterial sensitivity were assessed quantitatively by determining the IZs given in Table 8 and the antifungal activity were assessed and IZs given in Table 9. 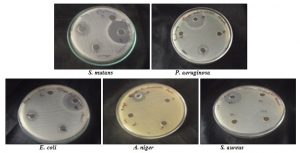 The results as diameter of the inhibition zone in ethanol extract have been given in the Table 10 and Fig. 9. The chloroform extract of the plant shows little activity against selected microbial strains so the results would be discarded. IZ of N. infundibulifolia whole plant ethanol extract is maximum in the case of E. coli and minimum in S. aureus.

DISCUSSION: Many species of orchids having helpful phytoconstituents are currently being used as drugs in the Indian system of medicine. Being members of a highly advanced family, orchids have a major role to play in the genetic engineering of new forms that may be useful in floriculture, pharmacology and other, as yet unexplored fields of science. Classical texts highlighted that orchid drugs like Jeevaka, Rishabhaka, Riddhi as Rasayana 12 and Vajeekarana agents 13 and used mainly in the treatment of Vata dominant diseases (which involves nervous system and musculo-skeletal disorders mainly) 13. Certain conditions like rheumatism, fractures, ear ache, nervous disorders, wounds, sexual problems, swellings, worm infestation, headache are found to be managed by the traditional practitioners with simple formulations consisting of orchids.

The results obtained from the present study provide certain informations with respect to the phyto-chemical constituents, antioxidant property, antibacterial activity of the two species of medicinal orchid Nervilia namely Nervilia crociformis and Nervilia infundibulifolia. These two species are closely related in their morphology and characteristics. In this study the authors try to identify the differences in chemical properties of these two species because these two species were used interchangeably for a certain disease kidney stone.

Out of five test strains, all the strains namely S. aureus (gram +ve, inhabit the respiratory tract is a facultative pathogen) and P. aeruginosa, (gram -ve, cause infection in blood and lungs), E. coli (gram -ve, intestinal infection and fever), S. mutans (gram +ve, inhabiting in the mouth of humans) were found to be inhibited by the 100 µg ethanol and chloroform extract of Nervilia crociformis and ethanol extract of Nervilia infundibulifolia. The results obtained were found to be encouraging as compared to that of Streptomycin. A. niger was the fungal strain studied and the results were satisfactory in the case of the extracts of the two studied plants.

CONCLUSION: Hence, orchids were commonly used as traditional medicine many of the medicinal orchids were yet to be explored for their medicinal properties. In the present study indicated that Nervilia crociformis and Nervilia infundibulifolia two medicinal orchids possess a good phyto-chemical, antibacterial and antioxidant activities. Further, work is required to find out the active principle from the plant extracts and to carry out pharmaceutical studies.

ACKNOWLEDGEMENT: We are thankful to the faculties and Head of the department of PG studies and research centre in botany Sir Syed College, Taliparamba, Kannur, Kerala for providing necessary laboratory facilities, and also thankful to the Kannur University for the financial assistance to carry out this research.

We acknowledge the research scholars of the Sir Syed College, Taliparamba for giving us support.