INTRODUCTION: Infectious diseases are one of the major causes of health hazard in humans and animals. These infections are caused by pathogenic bacteria, virus and fungi. Severity of infectious disease is bases on virulence factors produced by infectious agent. In recent years, various human pathogens have been reported to acquire resistance toward the common drugs. Drug resistant microbes are highly lethal and they increase the severity of infection especially in immunocompromised patients 1. Antimicrobial research always looks for new potent antimicrobial drugs from alternative sources. Medicinal plants proved to be a major source of new drug discovery.

India, China, Nepal and other Asian countries used many plants and plant derivatives to cure severe diseases in traditional medicinal system, most recently western countries also concentrating on medicinal plants for the discovery of new chemotherapeutic compounds 2. B. racemosa L. is a flowering plant of the family Caesalpiniaceae. B. racemosa L. is a habitat of Sub Himalayan tracts, Uttar Pradesh, West Bengal and Central and South India. It is also found widely in Ceylon, China and Timor.

Almost all parts of the plant viz., leaves, flowers and stem bark of this plant carry many medicinal properties and used in traditional medicinal system for the treatment of several diseases. The leaves are used in helminthic infection, flower in hemorrhages, piles, cough and stem bark for treating inflammation, headache, fever, tumors, skin infection, disease of blood, dysentery and diarrhea 3. Phytochemical testing of leaves and seeds of B. racemosa L. showed the presence of phenolic groups, flavonoids, saponins and tannins as major phytochemical groups 4. These phytochemical compounds play an important role in the medicinal values of the plant. Methanol extract of stem bark reported to contain antitumor 5, antimicrobial 6, antioxidant 5, 6, 7, hepatoprotective 7, 8, anti-inflammatory, antipyretic and analgesic properties 9, 10, 11. In earlier studies, the medicinal properties of the B. racemosa L. stem bark were broadly reported and very few studies have been carried out for leaves. In this current study we focused on the antimicrobial activity of methanol and aqueous extract of leaves of B. racemosa L. against clinical isolates of Gram positive bacteria, Gram negative bacteria and fungi.

Plant material: The Fresh mature leaves of B. racemosa L. were collected from the natural population growing in Vellore Hills, TN, India, during March 2009. The leaves sample was carried to the Molecular and Microbiology Research Laboratory, VIT University. Plant was identified in Herbal Garden of VIT University, Vellore TN, India. Voucher specimen was maintained in our laboratory (Accession number: BR/VIT//MMRL/1.3.2009-3).

Preparation of Crude Extracts: Leaves of the plant were washed properly under tap water followed by distilled water. Washed leaves were dried in hot air oven at a temperature of 40°C. Dried leaves were powdered by using a mechanical grinder. Ten grams of pulverized leave material was extracted with 100 ml of methanol and 100 ml of distilled water separately at room temperature for 48 hours. Extracts were filtered by using Whatman filter paper No. 1. Extracts were concentrated in rotary evaporator and dried by using lyophilizer. Leave extracts were stored in the refrigerator at 4°C for future use. The extracted powder was dissolved in 10 % dimethyl sulfoxide (DMSO) (10 % w/v) as 100 mg/ml stock solution.

Phytochemical Screening: Phytochemical screening of the crude methanol and aqueous extracts of B. racemosa L. was carried out in order to ascertain the presence of major phytochemical groups by using the standard protocols 12, 13.

Test microorganisms: The following bacterial and fungal isolates were used in the study;

Fungal Organisms: Candida albicans, Aspergillus niger (Clinical isolate). All the test organisms were inoculated in Nutrient Broth and incubated at 37°C for 8 hours.

Antibacterial activity: Antibacterial activity of the extracts was determined by agar well diffusion method as described by Tagg et al., with some modifications 14.  The concentration of bacterial suspension was adjusted to 0.5 McFarland standards. The bacterial suspensions were seeded on MHA plates. In each of these plates three wells were cut out using a standard cork borer (7 mm). Using a micropipette, 100 µl of each extract and negative control was added in to different wells. A positive control antibiotic disc was placed in the plate. Plates were incubated for 24 hours at 37°C. Antibacterial activity was evaluated by measuring the zone of inhibition. Experiment was performed in triplicates.

Antifungal Activity: Antifungal activity of the extracts was determined by agar well diffusion method as described by Hailu et al. with some modifications 15. The fungal suspensions were seeded on SDA plates. In each of these plates three wells were cut out using a standard cork borer (7 mm). Using a micropipette, 100 µl of each extract and negative control was added in to different wells. A positive control antibiotic disc was placed in the plate. Plates were incubated for 48-72 hours at room temperature. Antifungal activity was evaluated by measuring the zone of inhibition. Experiment was performed in triplicates.

Determination of Relative Percentage Inhibition: The relative percentage inhibition with respect to positive control was calculated by using the following formula 16.

The total area of the inhibition was calculated by using area = πr2; where, r = radius of zone of inhibition.

Determination of minimum inhibitory concentration (MIC): MIC of the plant extract was performed by modified agar well diffusion method. Two fold serial dilution of the stock solution was prepared in DMSO to make a concentration range from 0.1-100 mg/ml 17, 18. The concentration of test cultures was adjusted to 0.5 McFarland standards. The bacterial suspensions were seeded on MHA plates and fungal suspension on SDA plates. In each of these plates four wells were cut out using a standard cork borer (7 mm). Using a micropipette, 100 µl of each dilution was added in to wells. Bacteria plates were incubated at 37oC for 24 hours and fungal plates were incubated at room temperature for 48 to 72 hours. Antimicrobial activity was evaluated by measuring the zone of inhibition. Experiment was performed in triplicates.

FT-IR analysis of the Plant Sample: The dried leaves of B. racemosa L. were ground into fine powder using mortar and pestle. Two milligrams of the sample were mixed with 200 mg KBr (FT-IR grade) and pressed into a pellet. The sample pellet was placed into the sample holder and FT-IR spectra were recorded in the range 4000-450 cm–1 in FT-IR spectroscopy (AVATAR 300 FT-IR, Thermo Nicolet, USA) 19.

Yield of the extract: 10 grams of dried leaves powder of A. aspera was extracted in methanol and water separately using a soxhlet extractor. The yield of aqueous extract (4.1 %) was higher compare to methanol extract (3.1 %). 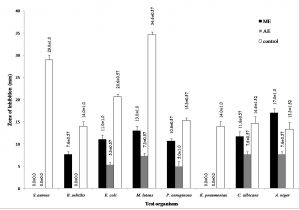 ME: methanol extract; AE: aqueous extract. All the values are represented as mean ± standard 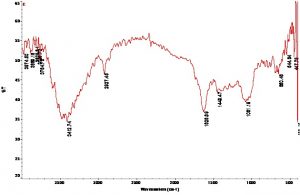 FIG. 2: FTIR SPECTRUM OF THE LATEX OF B. RACEMOSA L.

TABLE 5: ASSIGNMENT OF FT-IR ABSORPTION BANDS IN THE SPECTRA OF PLANT SAMPLE

DISCUSSION: The selection of this plant for the present study was based on its medicinal properties and use in traditional medicinal system. This plant is known for treatment of several infections, cough, fever, hemorrhage and tumor in India and China 3. The plant material was collected from the Vellore Hills, TN, India. This part of the country have mild humid condition with high temperature, these climate condition may induce the production of few novel antimicrobial compounds in the plant. The plant material was collected in March 2009, as it is the best time for this plant growth.

Drug resistant in microbes become a big problem along with the emergence of new infectious diseases. Microorganism acquired resistant against the pharmaceutical drugs by the production of drug degrading enzymes, resistant plasmids, alteration of metabolic pathway etc. 20, 21, 22, 23. To overcome these problems pharmacologist are focusing on different sources of new antimicrobial agents. The focus of this study was to discover a natural source of broad range antimicrobial compound. In the current study methanol and aqueous extracts of the leaves of B. racemosa L. was screened for phytochemical analysis and antimicrobial analysis. Results of the phytochemical analysis is supported by the earlier study as they reported that the leaves of the B. racemosa L. contain phenolic groups, flavonoids, saponins and tannins as major phytochemical groups 4. These phytochemicals may play an important role in antimicrobial properties, although further study is needed to isolate the bioactive compound.

In the current study methanol and aqueous extracts of the leaves of B. racemosa L. was screened against a variety of Gram positive bacteria, Gram negative bacteria and fungi by well diffusion method. Both extracts showed significant antimicrobial activity against Gram negative bacteria and fungi but very low inhibitory effect on Gram positive bacteria, however, both the extracts not showed any inhibitory effect on S. aureus and K. pneumoniae. Earlier methanol extract of B. racemosa root bark was reported to possess significant inhibitory effect against a broad range of microorganisms included P. aeruginosa, E. coli, Salmonella typhi, Shigella dysenteriae, Vibrio cholera, S. aureus, Streptococcus pneumoniae, M. luteus, S. epidermidis, C. albicans, A. niger, A. flavus and Alternaria solani 6. These studies concludes that B. racemosa L. is a valuable medicinal plant possessing a broad range of antimicrobial activity and can be explored for isolation of natural antimicrobial compounds.

CONCLUSION: Based on the results obtained in this study, we conclude that leaves of B. racemosa L. possess significant amount of antimicrobial property against a wide range of microorganisms. Results also reports the presence of various phytochemical compounds in B. racemosa L. leaves extracts. These phytochemicals may play key role in the medicinal value of this plant. Further, the bioactive compound can be isolated and characterize by using advance analytical techniques.

ACKNOWLEDGEMENT: Authors wish to thank management of VIT University, Vellore, TN, India, for providing necessary facilities and support for the completion of this work.