Plants and there preparations have been used as medicine since ancient time. The Ayurveda   and various ancient Indian literatures   have evidence the use of plants for various disorders.  Acalypha indica L is an erect annual herb with numerous long branches covered with soft hairs. According to the Siddha text, ‘Pathartha Guna Chinthamani' (Page no: 179), Acalypha cures  diseases  of  the  teeth  and  gums, burns, toxins  of  Plant  and mixed origin, stomach pain, diseases   due   to  Pitha,  bleeding piles,  irritations,   stabbing pain,  wheezing, sinusitis and neutralizes predominance of the Kabha factor.  In the traditional medicine the preparations from whole plants have been used to counter various diseases and disorders. The present review is therefore, an effort   to give a detailed survey of the literature on its pharamacognosy, phytochemistry, pharmacological and traditional uses.

This article is a sincere effort to compile the pharmacognosy and pharmacology of the plant and describe its potential. The plant Acalypha indica Linn.  is   commonly known as Indian Acalypha and it belongs  to the family  Euphorbiaceae, found in all parts of the tropics. This herbs found in fields and   wastes places throughout the hotter parts of the world. The common names of Acalypha indica are Brennkraut (German), Alcalifa (Brazil) and Ricinela (Spanish).

It is known as ‘Kucing galak and Rumput Lis-lis’ in Malaysia, ‘Rumput bolong-bolong’ and ‘Rumput kokosongan’ in Java   and    ‘Tam ye tuapa and Tam ye   meao’ in Siam.  It is a common annual herb, found   mostly in the backyards of houses and waste places throughout the plains of India. The plant has wide uses in the traditional medicines of various countries and reportedly possesses diuretic, purgative and Antihelmintic properties, besides being also used for bronchitis, asthma, pneumonia, scabies and other cutaneous diseases 1, 3. 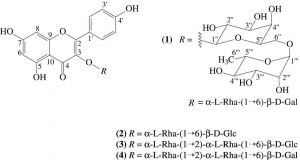 Traditional Uses: Leaves possess laxative properties “are used as a substitute for senega”, are used in the form of powder or decoction. Mixed with garlic they are used as Antihelmintic in worms. Mixed with garlic they are applied to scabies; and their juice mixed with oil forms an application in rheumatic arthritis. Expressed juice of the leaves is a safe, certain and   speedy emetic for children in one teaspoonful doses, in cases of croup; in smaller doses it is expectorant, and is useful in chronic bronchitis, asthma and consumption. The  decoction is employed in ear-ache as instillation and also as fomentation round the aching ear; and a cataplasm of the bruised leaves is applied  to  syphilitic  ulcers, to  maggot-eaten  sores and  also to relieve  the pain of  snakebites. Extract of fresh leaves may be employed in scabies and other skin diseases, with lime and onion. It is a good stimulating application in rheumatism. Powder of dry leaves is used in bed sores.  In congestive headache a piece of cotton saturated with the expressed juice of the plant or leaves and inserted into each nostril is said to relieve it by ‘causing hemorrhage from the nose.  In cases of obstinate constipation of children the leaves ground into a paste and made into a ball and introduced into the rectum, relax the sphincter and produces free motions. An infusion of the root or the root bruised in water, acts as a cathartic 3, 5.

Analgesic Activity: The methanolic extract of A. indica L.  showed significant analgesic activity in mice in a dose -  dependent manner.  Analgesic activity of the methanol extract was studied in mice by acetic acid induced writhing reflex method. Methanol extract at doses of 200 mg and 400 mg/kg body weight was used and was compared with the standard drug aminopyrine at a dose of 50 mg/kg body weight 6.

Anti-inflammatory Activity: Maximum  inhibition  by  the  methanolic  extract  was observed  at 250 mg/kg body weight  after  three  hours  of  ingestion,  which  was  comparable  to  that  of   the   standard drug phenylbutazone  at  a  dose  of  100mg/kg  body  weight. The anti-inflammatory activity also demonstrated in dose dependent manner 6.

Antihelmintic Activity: Antihelmintic   potential was evaluated using alcoholic extract of root of Acalypha indica and Pheretima posthuma as test worm. Three concentrations (10, 25 and 50 mg/ml) of alcoholic extract and its various fractions were tested in the bioassay. Albendazole (10 mg/ml) was included as standard reference and distilled water as control. The results indicated that the alcoholic extract significantly demonstrated paralysis and also caused death of worms especially at higher concentration of (50 mg/ml) 7.

Another study proved that ethanol and water extract of leaves, stems, seeds and roots from   Acalypha indica  were effective  against two  bacterial   Escherichia coli (Gram-negative bacterial), Staphylococcus aureus (Gram-positive bacterial) and for anti-fungal activity against three   fungi,  Aspergillus fumigatus, Microsporum canis (molds)  and  Candida albican   (yeast). Microsporum canis showed dose-dependent sensitivity towards aqueous leaves and roots extract, but resistant to both ethanol and water stems, roots and seeds extracts. Aspergillus fumigatus and Candida albican were resistant to both ethanol and water extract of all Acalypha indica 8, 9.

Antitubercular Activity: Anti-tuberculosis activity was tested against five plants extract namely A. indica, A. vasica,   A. cepa, A. sativum and A. vera. The resulted inhibition of these plants extract mentioned are 95, 32, 37, 72, 32 per cent, respectively for MDR isolate DKU-156 and 68, 86, 79, 72, 85 per cent, respectively for another MDR isolate JAL-1236, while for sensitive M. tuberculosis H37Rv, inhibition was found to be 68, 70, 35, 63 and 41 per cent, at 4 per cent v/v concentration in L-J medium. There was no inhibition against rapid grower M. fortuitum (TMC-1529).  In BacT/ALERT also, extracts of these plants showed significant inhibition against M. Tuberculosis 10.

Neuro-protective and Neuro-Therapy Activity: The neuro-protection and neuro-therapy studies done on the frog. Frogs were dosed with 5, 10, 15, 20, 25 mg.  Pancuronium bromide 0.2%, 4 mg, was used for a positive control as muscle relaxant. Neuroprotective study was done by ringer extract pancuronium bromide, and neuro-therapy study was ringer pancuronium   bromide extract procedures. The parameters measured in these studies were the electrical activities such as amount and duration (second) of re-polarization,   depolarization, resting potential, and the height of spike after electrical stimulation.

Neuro-protection  effect  of  extract was determined by the ability of muscle to show the  electrical response after incubating  with  pancuronium  bromide  for 10 minutes, and after incubating  with  extract  for  10 minutes  for neuro-therapy effect.  In the dose of 15 mg and 20 mg/mL of A. indica Linn. Extract showed better activities than the dose of 25 mg of extract, both as neuro-protection and neuro-therapy effects 13.

Post-coital Antifertility Activity: Four successive solvent extracts of the whole plant Acalypha indica were tested for post-coital antifertility activity in female albino rats. Of these, the petroleum ether and ethanol extracts were found to be most effective in causing significant anti-implantation activity. The antifertility  activity  was  reversible  on  withdrawal  of  the  treatment  of  the extracts. Both the extracts at 600 mg/kg body weight showed estrogenic activity. Histological studies of the uterus were carried out to confirm this estrogenic activity 14.

Anti-venom Activity: Different extracts of Acalypha indica was used for the study. In vitro HRBC membrane stabilization  properties  of  these  extracts  at  concentrations ranging from 2-400μg/ml revealed inhibition  of     haemolysis  induced  by  Russell’s  viper venom, in  a  concentration   dependent manner. The neutralizing potency of different leaf extracts petroleum ether, benzene, chloroform and acetone extracts of Acalypha indica prepared by successive   solvent   extraction   at intraperitoneal dose levels of 250, 500 and 750mg/kg revealed that the acetone extract possessed the most significant activity on venom-induced lethality 15.

Post-coital Infertility Activity: The petroleum ether and ethanol extracts were found to have anti-implantation activity when they were given to female albino rats. This effect was reversible upon withdrawal of the treatment with the extracts.  This effect is due to some estrogenic activity as evidenced by histological studies of the uterus 17.

CONCLUSION: The present study show the pharmacological study of the plant and various bio active compound responsible for it which have been reported. The whole plants have been used in traditional medicine for decades and the studies done yet have authentified the practice.  Earlier as  described  the  plant  have  been  used  in  the  Ayurveda, homeopathy  and siddha medicine.

However, more clinical and pathological studies must be conducted to investigate the unexploited potential of the plant.