ABSTRACT: Samanea saman is a tropical avenue tree which is widely cultivated in Northern America, and Asia belongs to the family Leguminosae. It possesses a wide range of biological perspectives. Folklore claims postulated that Samanea saman is having an antiulcer, antioxidant antibacterial and anti-mycobacterial properties. In the present investigation, the methanol extract of leaves of Samanea saman has been prepared based on the polarity and subjected to column chromatography. Based on this principle, the bioactive alcoholic extract (5%) was fractioned over a Silica gel (100-200 mesh) column by eluting with solvents of increasing polarity in the order of benzene: ethyl acetate and methanol. Similar TLC fractions were being combined and characterized by spectral analysis. Spectral data are revealed the presence of phytocompounds from the methanolic fractions of the Samanea saman. It was found that the compound named Pithecolobine showed remarkable activity against Mycobacterium tuberculosis by screening through Alamar blue assay (MIC at 3.12 µg/ml) and Luciferase assay (86% inhibition at 10 µg/ml) apart from other compounds obtained. The compound was also effective against lung cancer associated with tuberculosis. Further, the compound Pithecolobine was subjected to virtual screening. The docking studies of pithecolobine against the target proteins Enoyl-acyl carrier protein reductase (ENR) and Decaprenylphospho-beta-D-ribofuranose 2-oxidase (DprE1) reveals the compound pithecolobine is a potential drug candidate for tuberculosis.

INTRODUCTION: The World Health Organization estimates that about 80% of people living in developing countries rely almost completely on ancient medicines for their primary health needs. The WHO conjointly appreciated the importance of meditative plants for public health care in developing nations and evolved guidelines to support the member states in their efforts to formulate national policies on traditional medicines and to study their potential utility as well as evaluation, safety, and potency.

In our present investigation, Samanea saman was selected due to the presence of unsung biological potentials. Samanea saman Jacq. (Merr) is a large umbraculiform tree growing over 20 meters height with a stout trunk about 1.5 m in diameter and huge spreading canopy providing shade. The leaves fold together on the approach of rain, hence named as rain tree. It belongs to the family Mimosaceae which is the subfamily Leguminosae.

Traditional knowledge claims that a decoction of the inner bark or fresh cambium and leaves are used to treat anaphylactic dermatitis, eczema, and skin pruritis. Latex is used as gum for gluing 1. In Venezuela, rain tree is a traditional remedy for colds, diarrhea, headache, intestinal ailments, and stomach ache. A root decoction is used in hot baths for stomach cancer.

In the West Indies, the leaf infusion is used as a laxative and seeds are chewed for a sore throat. The alcoholic extract of the leaves is used to treat tuberculosis 2. In Columbia, the fruit decoction is employed as a sedative.

Tuberculosis and Lung Cancer: Chronic inflammation and scarring due to TB can lead to the development of cancer. The report states that the risk of cancer in tuberculosis patients was 16 times higher than normal individuals 3. Co-existence of TB and cancer causes, diagnostic chaos due to pathological similarities in presentation leading to delay in the diagnosis and constituting the appropriate therapy developed by molecular manipulation. Due to prevailing co-existence of tuberculosis and lung cancer and their persisting compatibilities, an attempt was made in our investigation to screen the bioactive compounds against lung cancer by in-vitro cytotoxicity studies.

Collection of Plant Material and Extraction: The plant specimens for the proposed study were collected from Nacharam, Medak, Telangana and it was authenticated by Prof. P. Jayaraman, Ph.D., voucher specimen (Reg no: PARC/2011/2011/858). The leaves were washed with water, cut into small pieces and dried in the shade for 2-3 weeks dried was powered and passed through the sieve no.40. The powder thus obtained was used for extraction. The powdered material is macerated in the solvents of increasing polarity (Petroleum ether, Chloroform, Methanol). The maceration process was carried out for 4 days (Cold maceration method).  The extracts were being concentrated by the rotavap evaporator.

Isolation of Phytocompounds: By the results of the bioactivity of the methanolic extract against Mycobacterium tuberculosis, the extract (1.6%) was fractioned over a silica gel (100-200 mesh) column by eluting with solvents of increasing polarity (benzene, ethyl acetate, and methanol) at different ratios. Thirty fractions obtained were subjected to TLC and phytochemical analysis. Similar TLC fractions were combined. The fraction (ethyl acetate: methanol 80:20) was concentrated using a rotavap in-vacuo and subjected GC- MS analysis to explore the phytoconstituents.

GC-MS analysis was carried out on a Perkin Elmer Clarus 680 GC-MS instrument employing the following condition: column elite -5MS (30.0 m, 0.25 mm ID, 250 µm, operating electronic impact mode; helium was used as a carrier gas at a constant flow, and the split ratio is 10:1; injector temperature is 250 ºC; flow  rate is 1ml/min; oven temperature is 60 ºC for 3 min, ramp 20 ºC/min to 500 ºC hold for 6 min. The total run time is 35 min. The compounds were subjected to antimyco-bacterial testing and antimicrobial testing to explore its biological potency and efficacy.

Antimycobacterial Testing: The isolated compounds were tested by Alamar blue assay and Luciferase protocol to determine the antitubercular activity.

Alamar Blue Assay: The antimycobacterial activity of compounds was assessed against tuberculosis using microplate Alamar Blue assay 5 (MABA). Briefly, 200 µl of sterile deionized water was added to all outer perimeter wells of sterile 96 wells plate to minimize evaporation of medium in the test wells during incubation. The 96 wells plate received 100 µl of the Middle brook 7H9 broth and serial dilutions of compounds were made directly on the plate. The final drug concentrations tested were 100 to 0.2 µg/ml. Plates were covered and sealed with parafilm and incubated at 37 ºC for five days. After this time, 25 µl of freshly prepared 1:1 mixture of Alamar Blue reagent and 10% tween 80 was added to the plate and incubated for 24 h. A blue color in the well was interpreted as no bacterial growth, and pink color was scored as growth.

In-vitro Screening of Isolated Compounds against Mycobacterium tuberculosis by Luciferase Assay Method: Jacobs and colleagues 6 have evaluated a novel reporter gene assay system for the rapid determination of drug resistance based on the gene coding for luciferase. Initially, identify a mycobacteriophage that infects Mycobacterium tuberculosis. Genetically engineer the myco-bacteriophage to contain luciferase. Infect the cultured sputum sample with the phage. If viable mycobacteria are present, the light is produced in the presence of D-luciferin. If the light does not diminish when the mycobacteria are treated with an antibiotic, then the mycobacteria are resistant. Measure the Relative Light Units (RLU) with a luminometer. The results were tabulated.

Lung Cancer Cell Lines Assay: Cancer cell line A549, Human lung cancer was used to predict the cell anticancer activity 7 (Human lung cancer cell) obtained from National Centre for Cell Science, Pune, India (NCSS). The cells were maintained in necessary media supplemented with 10% FBS, penicillin (100IU/ml) and streptomycin (100µg/ml) in a 5% carbon dioxide at 37 ºC. A549 were seeded at 100000 cells/well in 96-well plates, and both were incubated for 48 h. Different concentrations of the sample prepared like 100 µg/ml, 50 µg/ml, 25 µg/ml, 12.5 µg/ml, 5 µg/ml, 2.5 µg/ml and 1 µg/ml for 24 h incubation. After the medium is removed, it was washed with the phosphate saline solution. Then the sample was kept in a new medium containing 50 µl of MTT solution (5 mg/ml), to each well incubated for four hours. After the incubation, 1 ml of dimethyl sulfoxide was added. The viable cells were determined by measuring the absorbance at 570 nm by the microplate reader.

Docking Studies: Various enzymes involved in Mycobacterium tuberculosis cell wall biosynthesis and physiological functions have become attractive targets for the design of novel anti-tubercular agents 8. Natural sources represent an immense reservoir of chemically-distinct molecules which can yield new templates for drug design. There has been a renewed interest in recent years in the discovery of antitubercular agents from natural sources. Virtual screening has been successfully used to determine new leads in drug discovery. The program AUTODOCK has been efficaciously used in various protein systems for virtual screening. In the present investigation, we initially attempted to identify Mycobacterium tuberculosis inhibitors by virtual screening of docking compounds.

RESULTS AND DISCUSSION: A Preliminary phytochemical investigation was done to explore the various phytoconstituent such as steroids, phenols, alkaloids, flavonoids, tannins, and glycosides. The extracts were subjected to a preliminary anti mycobacterial screening by BACTEC 460 TB method and found that methanolic extract has pronounced activity against tuberculosis. Then the bioactive methanolic extract of leaves of Samanea Saman has been prepared and subjected to column chromatography. Based on this principle, the bioactive alcoholic extract (5%) was fractioned over a silica gel (100-200 mesh) column by eluting with solvents of increasing polarity in the order of benzene: ethyl acetate and methanol. Similar TLC fractions were being combined and characterized by HPTLC and GC-MS analysis.

Since, the Rf values of the compounds are closely, a greater percentage of methanol is added to purify the ethyl acetate fraction (10%), and a single compound was obtained. The bioactive active compound was found to be Pithecolobine having the spectral data of the IR strong OH stretching at 3441 cm-1, C=O is stretching at 1764 cm-1 and 1H NMR spectra of the triplet at 0.921 δ and singlet at 3.3 δ support OH protons of the structure. The oily liquid answered for the test for alkaloids. It was found that the pithecolobine showed remarkable activity against Mycobacterium tuberculosis by screening through Alamar blue assay (MIC at 3.12 µg/ml) and Luciferase assay (86% inhibition at 10 µg/ml). Pithecolobine also exhibits antibacterial and antifungal potentials in the concentration range of 25 µg/ml - 75 µg/ml respectively. 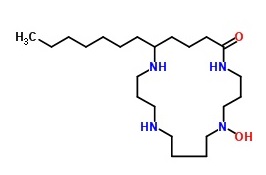 Cytotoxicity Studies: Table 4 shows the results of anticancer cancer activity of Samanea saman. The isolated compound pithecolobine was evaluated for their in-vitro cytotoxicity activity in comparison with standard drugs. The percentage of cytotoxicity exhibited by pithecolobine at 5 µg/ml was found to be 19.56%. 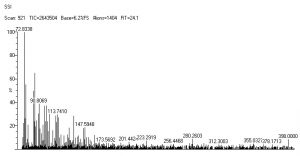 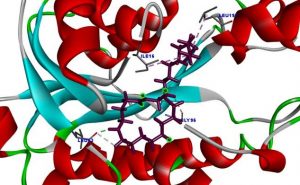 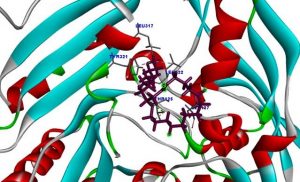 CONCLUSION: The present study reveals that the Samanea saman is a tropical avenue medicinal potential plant. Even though the literature pertains the biological perspectives of the extracts, most of the extensive pharmacological studies remain untapped. In this research, the antimycobacterial activity of the plant had been exhibited. The combat against the Mycobacterium tuberculosis and the compound also has anticancer activity.

Docking studies of the isolated compounds reveal that pithecolobine from Samanea saman is active against the proposed drug targets with better binding affinity. It explores the way for the alternate drug to target against Mycobacterium tuberculosis. Hence, the study indicates the additional medicinal value in the Indian systems of alternative medica armory.

ACKNOWLEDGEMENT: We owe our gratitude and heartfelt thanks to beloved Chairman, Mr. J. Sagar Rao Secretary, Mr. J. Sumith sai, Jyothishmathi College of Pharmacy for their constant encouragement and ever willingness to provide the necessary facilities at the Institution.

The authors extend the thanks to SAIF, IIT Madras, Chennai and Bioneemtec private limited, Chennai in carrying out spectral studies.

CONFLICT OF INTEREST: The authors declare no conflict of interest associated with this work.