Studies have been demonstrating that Vismia guianensis (Aubl.) Choisy, popularly known as seal, a species native to South America has high anticancer and antimicrobial potential. The objective of this study was to evaluate the antimicrobial activity of the ethanolic extract obtained from the leaves of V. guianensis, and trace its chemical profile. The phytochemical screening showed the presence of different phenolic compounds in the extract. The high performance liquid chromatography performed on the sub-fractions A and B from the ethyl acetate fraction traced the chemical composition profile of the ethanol extract, composed by benzophenone, xanthones and anthraquinones. The antimicrobial activity of the extract evaluated by agar diffusion method showed inhibition against Gram-positive bacteria: Streptococcus mitis (ATCC 903), Streptococcus sanguis (ATCC 10557) and Staphylococcus aureus (ATCC 6538) and the fungi: Candida albicans (ATCC 40175), Candida krusei (ATCC 40147) and Candida parapsilosis (ATCC 40038).

INTRODUCTION: The drug resistance of human and animal pathogens is one of the best documented cases of biological evolution, and is a serious problem both in developed and developing countries. The daily consumption of more than one ton of antibiotics in some countries has resulted in resistance to bacterial populations, thus causing a serious public health problem. In face of this scenario, the search for substances from natural sources, including plants, has been gaining importance in the pharmaceutical companies 1.

Vismia guianensis (Aubl.) Choisy, is a species native to South America, and can be found in secondary vegetation forests in the states of Amazonas, Para, Maranhao, Bahia and Minas Gerais, Brazil 2.  Popularly known as “seal”, it is a small tree measuring 3-7 meters height, open and irregular crown with new rust-puberulous branches whose leaves are green in the upper region and yellow in the lower one 3. This species provides beautiful pale-red colored wood with thin and light veins, fibrous tissue, regular durability, and is suitable for construction, woodworking and luxury carpentry. The bark is very thick and therefore used for roofing 4. Kerharo 5 highlights its use especially in the treatment of skin diseases, presenting itself as a powerful laxative 3; moreover, its leaves are used as a tonic 6 and have antipyretic and antirheumatic properties 3.

For the specimen under study, many secondary metabolites have already been isolated and identified. The vismione A, a constituent belonging to this species has been reported to be a potent anticancer agent, with strong activity against certain tumors such as ovarian carcinoma and B16 melanocarcinoma 7. The benzophenones and benzocoumarines isolated from V. guianensis showed a moderate cytotoxicity against KB cell lines (oral squamous cell carcinoma) 8. Suffredini et al. 9 studies recorded the occurrence of significant lethal activity of V. guianensis plant extracts on human breast cancer cells (MCF-7).

However, their experiments 10 showed that aqueous extracts of fruits and seeds of this species presented a good lethality in colon adenocarcinoma cells (KM-12). Alvarez et al. 11 in a recent study detected the presence of phenolic compounds in the fruits of V. guianensis which have a potent antioxidant activity. One of these phenolic compounds is the γ-hydroxy-ferruginine A, isolated from the latex of this species, which is able to inhibit human topoisomerase II-α and might be a starting point for future development of antitumor drugs 12.

Once the anticancer and antimicrobial potential of this species has been constantly studied and confirmed, the present study intends to evaluate the antimicrobial activity of the hydroalcoholic extract obtained from the leaves of Vismia guianensis (Aubl.) Choisy, through agar diffusion method. Since, the research was performed with a plant extract consisting of several substances; the derivative was initially analyzed for the phytochemical characteristics of its constitution through the phytochemical screening and chromatographic profile.

Processing of plant material: The botanical material was collected by the Associations of Herb Vendors Ver-O-Peso Market in Belem Metropolitan Area, (1°17’46” S; 48 ° 27 '58.02 " W), in the end of March 2008. Species identification was confirmed by the Goeldi Museum herbarium (voucher specimen under the MG registration number: 2500133). The leaves were dried in a circulating air oven (40±2oC) and then crushed in stainless steel knives mill.

Obtaining the dried Ethanol Extract: The powdered material was macerated for a week in a solution of alcohol 70 °GL (Impex) 13. Then, the plant derivative was filtered, concentrated on rotary evaporator at low pressure and the excess of water was sublimed by lyophilization (MicroModulyo/115).

Determination of the chromatographic profile: The hydroalcoholic tincture has undergone a solid-liquid solvent partition in chloroform, ethyl acetate (EtOAc) and methanol. The sub-fractions A and B were obtained by preparative thin-layer chromatography (PTLC) from the ethyl acetate in ethyl acetate, methanol and water fractions (75:15:10) on normal silica gel. They were dissolved in 5 mg / mL methanol and then filtered through a 0.45 µm membrane filter (Millipore, Merck). Aliquots of 20 µL of both samples were analyzed in chromatograph (Merck Hitachi), model L-7455 LaChrom, equipped with column LiChrospher 100® RP-18 (250 x 3.5 µm) and stabilized at 25±1°C. The samples were eluted with acetonitrile/water at a flow rate of 1 mL / min, in gradients: 0min (10:90), 15 min (40:60) and 75 min (100:0) and maintained for 20 minutes 15.

Processing of Biological Material: The strains were prepared in Brain Heart Infusion (BHI) and incubated at 35°C for 24 hours. The strains of S. mitis (ATCC 903), S. sanguis (ATCC 10557) and S. mutans (ATCC 25175) were subcultured in blood agar plate, and the strains of S. mutans (ATCC 25175) were kept under microaero- philic conditions (5% CO2) in a Gaspak jar. Inocula of microorganisms were prepared by taking three to four colonies of each strain isolated in Muller-Hinton agar, and diluted in 0.85% saline until reaching the turbidity corresponding to tube 0.5 of the Mac-Farland scale 16.

Assessment of antimicrobial activity by disc diffusion method: The inoculum of all microorganisms were spread (in duplicate) with the aid of a disposable swab across the surface of Mueller Hinton agar in Petri dishes (12x15 cm) .Then filter paper disks impregnated with 10µL of V. guianensis extract, dissolved in dimethyl sulfoxide (DMSO) at concentrations of 500, 250, 125, 62.5, 31.25 and 15.625 mg/mL and positive (nystatin 50µg / mL and chloramphenicol  30µg / mL) and negative controls (DMSO) were added. The system was incubated at 35°C for 24 hours. The extract concentration able to inhibit microbial growth, which was observed through the formation of an inhibition growth zone around the disc (equal to or greater than 8 mm) 17, was considered.

RESULTS: The research began with the phytochemical screening (Table 1), where the main groups of chemical constituents present in the plant species could be qualitatively determined, using simple tests of color reaction and precipitation 13. The ethyl acetate fraction showed a good separation profile through analytical thin layer chromatography when compared to the retention factor (Rf) of standard emodin (Sigma®, with 98.9% purity). This fraction was used in a preparative thin layer  chromatography  to obtain the sub-fractions A and B which were analyzed by high performance liquid chromatography (HPLC), outlining the composition profile of the hydroalcoholic extract of V. guianensis. The spectra presented in Figure 1, reproduced according to Politi et al., 15 showed the same retention time for one type of benzophenone, a xanthone derivative and different types of anthraquinones. 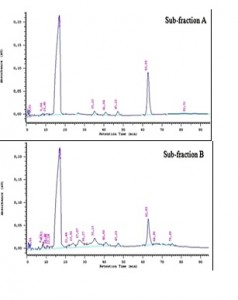 In the microbiological quality assessment of the extracts, which were carried out previously to the antimicrobial tests, no growth of bacterial or fungal colonies were observed in the Sabouraud agar and TSA medium, indicating that they were appropriate to be used in this study. The criteria for the assessment of the antimicrobial activity is the final result of the means of the measurements in each plate (duplicate), and how susceptible a halo (equal to or larger than 8 mm diameter) was considered 18.

DISCUSSION: V. guianensis is within plant species such as Coffea arabica which produce secondary metabolism components that act as a defense mechanism. Studies have shown that secondary metabolism is an impediment to feeding, predominantly accumulated in the organs and tissues that are more exposed to attack and require more protection, such as leaves and fruits 19.

This method of defense can be produced as a temporary response to some injury, pathogen attack or be constantly present in different concentrations depending on the developmental stage and the organ where it is. V. guianensis defense strategy involves the production of two types of phenolic compounds, the vismione 20 and ferruginine 21.

Monacelli et al., 22 proved that the leaves of V. guianensis in their primary stage of development presented 0.44% vismione and along time the percentage in the mature leaves decreased to 0.20%. According to the results obtained in the chemical prospection of the hydroalcoholic extract obtained from V. guianensis leaves (Table 1), there is indicative of the presence of different phenolic compounds. The other results, the presence of triterpenes 23 and xanthones 15, are in agreement with the literature.

The ethyl acetate fraction, traced the composition profile of the extract of V. guianensis leaves (Figure 1). In recent studies, Lins et al., 24 stated that the fraction obtained from the ethyl acetate solvent is the most important one due to its high content of phenolic compounds, presenting high radical activity against DPPH and ABTS. And as noted, the anthraquinones were the major component of the leaves of this species, whose basic skeleton is the emodin (1, 3, 8-trihydroxy- 6- methyl- anthraquinone) according to results previously reported in the literature 15.

Emodin is a purgative anthraquinone found in many plants, especially in Cassia occidentalis L., possessing monoamine oxidase and tirosinaquinase inhibitory activity 25 also showing antioxidant activity 26.  Its use was also reported as antimicrobial, anticancer and carthatic agent. It also possesses a remarkable bacteriostatic effect on Gram-positive bacteria, particularly Staphylococcus aureus 27. According to the results of the antimicrobial activity (Table 2), it is observed that the extract was effective against Gram- positive bacteria and the major action was on Streptococcus, a predominant bacterial genus in the oral cavity. Most species found in this region of the human body are identified as S. viridans; motionless, non- spore- forming microorganisms, or even encapsulated, sometimes 28. According to Uzeda 28  Streptococcus sanguis (S. sanguis) is the most common species isolated from the dental plaque and has been frequently isolated from the blood of patients with subacute bacterial endocarditis and Streptococcus mitis (S. mitis), is the species  characterized by the formation of small punctate colonies and colonizes the various habitats of the human oral cavity.

Some species of Vismia are important due to the orange-yellow latex that exudes when cutting in several parts of the plant. This latex has been used by some Amazonian tribes to treat wounds, herpes and fungal infections of the skin 29.  Santos et al., 23 studies confirmed the efficacy of the hexane fraction of the bark and the crude ethanolic extracts from both the root and bark of V. guianensis against Mycobacterium phlei. However, the present study showed that hydroalcoholic extract of Vismia guianensis leaves was effective against Candida.

Candida albicans is the most common pathogen in cutaneous and oropharyngeal candidiasis, however, non-albicans species have increased in number and importance in the vaginal and systemic candidiasis, such as C. Krusei and C. parapsilosis 30. The predisposing factors of candidiasis may be from systemic or local origin. Among the systemic factors, the conditions of the immune status (pregnant women, children, elderly, HIV positive, corticosteroid therapy and cytotoxic drugs), endocrine disorders (diabetes, hypothyroidism) and malignancies 31 can be highlighted.

CONCLUSION:            The chemical composition of the ethanol extract from leaves of Vismia guianensis (Aubl.) Choisy, outlined by the phytochemical screening and the chromatographic profile showed that phenolic compounds and anthraquinones are part of its constitution. These components are related to the antimicrobial activity shown against the microorganisms tested in this study, Gram-positive bacteria and Candida. As many of the non-albicans Candida species most commonly isolated, are less susceptible to azole derivatives, making these infections difficult to treat , the results obtained in this work are of great importance and justify the continued evaluation of this antimicrobial extract, by determining the minimum inhibitory concentration  for the microorganisms sensitive to the ethanolic extract from V. guianensis leaves.

ACKNOWLEDGEMENTS: To the financial support of the Coordination of Improvement of Higher Education Personnel CAPES and the Research Foundation of the State of Para -FAPESPA.