Natural products are an important source of new structures leading to drugs in all major disease areas. They represent a pool of privileged structures that are optimized by evolution to interact with proteins and other molecules. Bombax ceiba is an important medicinal plant of tropical and subtropical India. Its medicinal usage has been reported in the traditional systems of medicine such as Ayurveda, Siddha and Unani. The present commentary includes the detailed exploration of phytochemical properties along with the TLC ratios of various extracts of Bombax ceiba in an attempt to provide a direction for further research.

INTRODUCTION: Bombax ceiba contains about 26 genera and nearly 150 pantropical species 2. It is commonly known as Simbal, Simul, Indian kapok, Purani, Pagun, Roktosimul, Indian bombax or Red Silk cotton which is an important medicinal plant 3, 4 and found widely in temperate Asia, tropical Asia, Africa and Australia. In India, it can be found at altitudes between sea level and upto 1500 m elevation. In peninsular India, the tree is very common in the dry as well as moist deciduous forests and rivers. The tree is a strong light-demander, fast growing and grows best on deep sandy loams or other well-drained soils, particularly in valleys, in regions receiving from 50 to 460 cm annual rainfall well distributed throughout the year 5. Previous literature survey has revealed that this plant has been used extensively for treatment of some diseases like anti-inflammatory 6, anti-HIV, hepato-protective, hypotensive 7, antiangiogenic 8, antioxidant activities and toxicity study 7.

Plant Material: The plant Bombax ceiba was collected from Majhitar, East Sikkim during the month of December to mid of February 2009. The flowers were identified by Dr. H. B. Singh, Scientist F & Head, Raw Materials Herbarium & Museum and a voucher specimen was deposited in the Department herbarium [Reference No.- NISCAIR/RHMD/Consult/- 2008- 09/1165/197]. The flowers were taken and dried in shade. Then the shade-dried flowers were made into coarse granules and were used for different investigation.

Preparation of Extracts: The shade dried flowers of Bombax ceiba were powdered. About 1 kg of the dried powder was extracted first with petroleum ether at 60° to 65°C by continuous hot percolation, using Soxhlet apparatus. This process was continued by using solvents of increasing polarity. The extraction was continued for 72 hours in each solvent. The crude extracts obtained after carrying out the above procedure were re-dissolved in respective solvents and the experiments were carried out to establish the presence of compounds.

Phytochemical Evaluation of Bombax ceiba Extracts: The concentrated extracts were subjected to chemical test as per the methods mentioned below for the identification of the various constituents 9. The results of the extracts are tabulated in Table 1.

Mayer’s Test: To a few ml of filtrate, a drop or two of Mayer’s reagent is added by the side of the test tube. A white or creamy ppt. indicates test as positive.

Wagner’s Test:  To a few ml of filtrate, few drops of Wagner’s reagent is added by the side of the test tube. A reddish-brown ppt. indicates test as positive.

Hager’s Test: To a few ml of filtrate, 1 or 2ml of Hager’s reagent is added by the side of the test tube. A prominent yellow ppt. indicates test as positive.

Dragendorff’s Test: To a few ml of filtrate, 1 or 2ml of Dragendorff’s reagent is added by the side of the test tube. A prominent yellow ppt. indicates test as positive.

Detection of Carbohydrates: The extract (100mg) is dissolved in 5ml of water & filtered. The filtrate is subjected to the following test:

Molish’s Test: To 2ml of filtrate, 2 drops of alcoholic solution of α-naphthol is added, the mixture is shaken well & 1ml of conc. H2SO4 is added slowly along the side of the test tube & allowed to stand. A violet ring indicates the presence of carbohydrate.

Benedict’s Test: To 0.5ml of filtrate, 1ml of Benedict’s reagent is added. The mixture is heated on a boiling water bath for 2 min. a characteristic colored ppt. indicates the presence of sugar.

Barfoed’s Test: To 1ml of filtrate, 1ml of Barfoed’s reagent is added & heated on a water bath for 2 min. Red ppt. indicates presence of sugar.

Detection of Saponins: The extract (50mg) is diluted with distilled water & made upto 20ml. The suspension is shaken for 15 min. A layer of 2 cm of foam indicates the presence of saponins.

Ferric Chloride Test: The extract (50mg) is dissolved in 5ml of distilled water. To this few drops of natural 5% ferric chloride solution is added. A dark green color indicates the presence of Phenolic compounds.

Lead Acetate Test: The extract (50mg) is dissolved in distilled water & to this; 3ml of 10% lead acetate solution is added. A bulky white ppt. indicates the presence of Phenolic compounds.

Magnesium & Hydrochloric acid reduction: The extract (50mg) is dissolved in 5ml of alcohol & few fragment of magnesium ribbon & conc. HCl acid (drop wise) is added. If any pink to crimson color develops it indicates the presence of flavanol glycosides.

Alkaline reagent Test: An aqueous solution of the extract is treated with 10% NH4OH solution. Yellow fluorescence indicates the presence of flavonoids.

Detection of Glycoside: 50gm of extract is hydrolyzed with concentrated hydrochloric acid for 2hr on a water bath, filtered & the hydrolysate is subjected to the following test.

Borntrager’s Test: To 2ml of filtered hydrolysate, 3ml of CHCl3 is added & shaken, CHCl3 layer is separated & 10% NH3 solution is added to it; pink color indicates the presence of glycosides.

Detection of Proteins & Amino Acids: The extract (100mg) is dissolved in 10 ml of distilled water & filter through Whatman filter paper no-1& the filtrate is subjected to tests for proteins & amino acids.

Millon’s Test: To 2 ml of filtrate, few drops of Millon’s reagent are added. A white ppt. indicates the presence of proteins.

Biuret Test: An aliquot of filtrate is treated with one drop of 2% copper sulphate solution. To this 1ml of ethanol (95%) is added, followed by excess of potassium hydroxide palate. Pink color in the ethanolic layer indicates the presence of proteins.

Ninhydrin Test: Two drops of ninhydrin solution (10mg of ninhydrin in 200 ml of acetone) are added to 2ml of aqueous filtrate. A characteristic purple color indicates the presence of amino acids.

Legal’s Test: 50mg of extract is dissolved in pyridine; sodium nitroprusside solution is added & made alkaline using 10% NaOH. The presence of glycoside is indicated by pink color.

Keller-Killiani Test: To an extract of drug in glacial acetic acid, few drops of ferric chloride & conc. Sulfuric acid are added. A reddish brown color if formed at the junction of two layers & the upper layer turns bluish green.

Liebermann- Burchard’s test: The extract (50mg) is dissolved in 2ml acetic anhydride. To these 1-2 drops of conc. Sulfuric acid is added, along the sides of the test tube. An array of color changes shows the presence of phytosterols.

Saponification Test: Add a few drops of 0.5 N alc. KOH to a small quantity of extract along with a drop of phenolphthalein. Heat the mixture on water bath for 1-2 hr. Formation of soap or partial neutralization of alkali indicates the presence of fixed oils & fats.

Detection of Gums & Mucilage: Extract (100 mg) is dissolved in 10ml of distilled water & to this 25ml of absolute alcohol is added with constant stirring. White or cloudy ppt. indicates the presence of gums & mucilage.

Preparation of TLC plates: 30gms of silica gel ‘G’ was weighed and made to a homogenous suspension with 60ml distilled water for two minutes. The suspension was distributed over the plate which was air dried until the transparency of the layer disappeared. The plates were dried in hot air oven at 110°C for 30 mins and then stored in a dry atmosphere and used whenever required.

Preparation of Sample Solution: Prior to TLC, samples are dissolved in a suitable solvent and then applied usually in 1-10µl volumes to the origins of a TLC sheet or plate.

Application of the Substance Mixture for separation: The solutions of the different samples were taken in capillary tubes and were spotted on a TLC plate 2cm above its bottom. 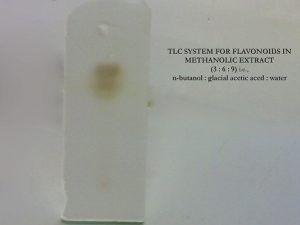 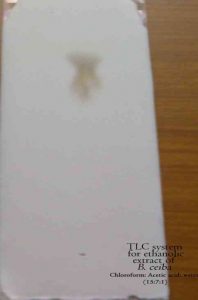 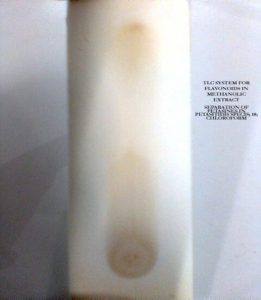 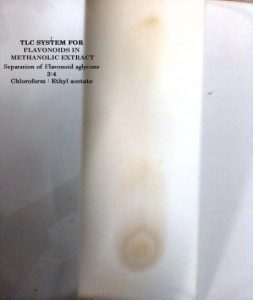 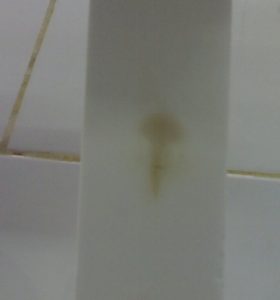 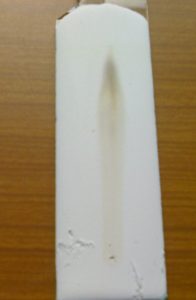 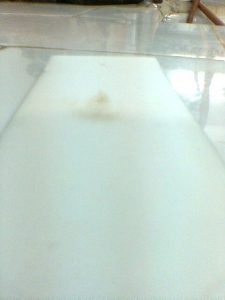 FIG. 1: PHOTOGRAPHS OF SOME TLC PLATES OF FLAVONOIDS, ALKALOIDS AND PHYTOSTEROLS 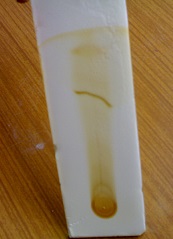 FIG: 2: PHOTOGRAPHS OF SOME TLC PLATES OF COUMARIN AND PHENOLIC COMPOUNDS

DISCUSSION: From the above work carried out of the flowers of Bombax ceiba Linn, the alcoholic and water extracts indicate the presence of Alkaloids, Flavonoids, Glycosides, Proteins and Amino acids and Coumarins. This extract was undergone for TLC and spots were identified in the solvent systems with the following ratio’s i.e. n-butanol: Acetic acid: Water, Chloroform: Acetic acid: Water, Ethyl acetate: Pyridine: water: methanol, Chloroform: Ethyl acetate for Flavonoid molecules; Chloroform: Ethyl acetate: Methanol, Hexane: Dichloromethane: Ethyl acetate, Dichloro methane: Acetonitrile for Coumarin molecules; Hexane: Ethyl acetate for Phytosterols; 10% acetic acid, Acetone: Ethyl acetate, Ethylacetate: Chloroform: Water for Alkaloid molecule. In this regard, we can conclude that as compounds are present in the extracts of this plant, studies need to be carried out to explore Bombax ceiba Linn for its further research activity.