INTRODUCTION: The medicinal actions of plants unique to particular plant species or groups are consistent with the concept that the combination of secondary products in a particular plant is taxonomically distinct 1, 2. Screening active compounds from plants has to lead to the invention of new medicinal drugs which have efficient protection and treatment roles against various diseases including cancer and Alzheimer's disease 3, 4.

Plants remain a vital source of drugs, and nowadays much emphasis has been given to neutraceuticals. A large number of medicinal plants and their purified constituents have shown beneficial therapeutic potentials 5. To promote the use of medicinal plants as potential sources of antimicrobial compounds, it is important to thoroughly investigate their composition and activity and thus validate their use 6.

Some phytochemicals produced by plants have antimicrobial activity and used for the development of new antimicrobial drugs 7. It has been shown that in-vitro screening methods could provide the needed preliminary observations to select crude plant extracts with potentially useful properties for further chemical and pharmacological investigations 8. The determination of phyto-constituents is largely performed by relatively expensive and often laborious techniques such as gas (GC) and liquid (LC) chromatography combined with specific detection schemes 9, 10. Analysis of small amounts of chemicals has become easier and more cost-effective owing to the development of hyphenated chromatographic techniques such as GC or LC-MS. GC-MS analysis can identify pure compounds present at less than 1gm 11. However, simple, cost-effective, and rapid tests for detecting phyto components are necessary. Spectroscopic (FTIR) methods together or separate can be used in this sense as well as conventional methods 12-14.

Tiliacora acuminata is a large woody climber; branches cinereous, striate. Leaves are long, ovate, acuminate, cordate, truncate or rounded at the base, flowers yellow in elongate, lax, axillary, racemose panicles belonging to the family Menispermaceae. This plant has been used as an ingredient in many of the ayurvedic preparations and regarded as an antidote for snake bite 15, 16. Taking into consideration of the medicinal importance of this plant, the ethanol extract of Stem and leaf of Tiliacora acuminata were analyzed for the first time using GC-MS. This work will help to identify the compounds of therapeutic value. A majority of the rich diversity of Indian medicinal plants is yet to be scientifically evaluated for such properties. With this background, the present study was aimed to identify the phytoconstituents present in Tiliacora acuminata using GC-MS analysis. GC-MS is the best technique to identify the bioactive constituents of long-chain hydrocarbons, alcohols, acids esters, alkaloids, steroids, amino acid and nitro compounds 17.

MATERIALS AND METHODS: The stem and leaf of T. acuminata were collected from Ulakaruvi, Kanyakumari District, Tamil Nadu. The plant was identified with the help of local flora and authenticated in Botanical Survey of India, Southern circle, Coimbatore, Tamil Nadu.

Preparation of Extracts for Phytochemical Screening: Freshly collected stem and leaf samples of T. acuminata were dried in the shade, and then coarsely powdered separately in a willy mill. The coarse powder (100g) was extracted successively with petroleum ether, benzene, ethyl acetate, methanol and ethanol, every 250 ml in a Soxhlet apparatus for 24 h. All the extracts were filtered through Whatman no. 41 filter paper. All the extracts (petroleum ether, benzene, ethyl acetate, methanol, and ethanol) were subjected to qualitative tests for the identification of various phytochemical constituents as per standard procedures 18-20.

FT-IR Analysis: A little powder of plant specimen was mixed with KBr salt, using a mortar and pestle, and compressed into a thin pellet. Infrared spectra were recorded as KBr pellets on a Thermo scientific Nicot iS5 iD1 transmission, between 4000-400 cm-1. 21

Preparation of Extracts for GC-MS: Stem and leaf of T. acuminata were cleaned, shade dried and pulverized to powder in a mechanical grinder. The required quantity of powder was weighed and transferred to Stoppard flask and treated with ethanol until the powder is fully immersed. The flask was shaken every hour for the first six hours, and then it was kept aside and again shaken after 24hours. This process was repeated for three days, and then the extract was filtered. The extract was collected and evaporated to dryness by using vacuum distillation unit. The ethanol extracts thus obtained was used for GC-MS analysis.

GC-MS Analysis: The GC-MS analysis of stem and leaf extract were performed by using a Perkin-Elmer GC Clarus 500 system and Gas chromatograph interfaced to a Mass spectrometer (GC-MS) equipped with an Elite-I, fused silica capillary column (30mm × 0.25mm 1D × 1 μMdf, composed of 100% Dimethylpolysiloxane). For GC-MS detection, an electron ionization system with ionizing energy of 70 eV was used. Helium gas (99.999%) was used as the carrier gas at constant flow rate 1ml/min, and an injection volume of 2 μl was employed (split ratio of 10:1); Injector temperature 250 °C; Ion-source temperature 280 °C. The oven temperature was programmed from 110 °C (isothermal for 2 min.), with an increase of 10 °C/min, to 200 °C, then 5 °C/min to 280 °C, ending with a 9 min isothermal at 280 °C. Mass spectra were taken at 70 eV; a scanning interval of 0.5 sec and fragments from 45 to 450 Da. Total GC running time was 36 min. The relative % amount of each component was calculated by comparing its average peak area to the total areas, software adapted to handle mass spectra, and chromatograms was a Turbo mass.

Identification of Compounds: Interpretation of mass spectrum GC-MS was conducted using the database of National Institute Standard and Technology (NIST) having more than 62,000 patterns. The spectrum of the unknown component was compared with the spectrum of the known components stored in the NIST library. The Name, Molecular weight, and structure of the components of the test materials were ascertained.

Methanol and ethanol extracts of stem and leaf of T. acuminata revealed the presence of alkaloids, anthraquinones, catechins, coumarins, flavonoids, phenols, quinones, saponins, steroids, sugar, glycosides, and xanthoprotein. The FT-IR spectral studies of stem and leaf powder of T. acuminata gave the following characteristics absorption peaks, as shown in Table 2 and Fig. 1 and 2.

Six compounds were identified in T. acuminata stem by GC-MS analysis. The active principles with their Retention time (RT), Molecular formula (MF), Molecular weight (MW) and Concentration (%) are presented in Table 3 and Fig. 3.

*Parameters tested are not covered under the scope of NABL accreditation 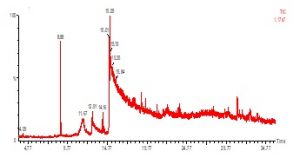 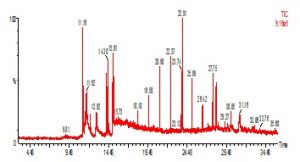 TABLE 5: ACTIVITY OF PHYTO-COMPONENTS IDENTIFIED IN THE ETHANOL EXTRACT OF STEM OF TILIACORA ACUMINATA

TABLE 6: ACTIVITY OF PHYTO-COMPONENTS IDENTIFIED IN THE ETHANOL EXTRACT OF LEAF OF TILIACORA ACUMINATA

DISCUSSION: The plants are known as medicinal rich in secondary metabolites, which include alkaloids, glycosides, flavonoids, insecticides, steroids, related active metabolites. They are of great medicinal value and have been extensively used in the drug and pharmaceutical industry. Recently, several studies have been reported on the phytochemistry of plants across the world. In the present investigation, the qualitative phytochemical investigation revealed that the methanol and ethanol extracts contained some phytoconstituents. Alkaloid, anthraquinone, catechins, coumarins, flavonoids, phenols, quinones, saponins, steroids, sugar, glycosides and xanthoproteins are found in both the extracts. Alkaloids possess anti-inflammatory, antiasthmatic, and antianaphylaxis properties with consequences of altered immunological status in-vivo. Furthermore, an alkaloid, which is one of the largest phytochemical groups in plants has an amazing effect on humans, and this has led to the development of powerful painkiller medicines 22.

Flavonoids, the major group of phenolic compounds are reported for their antimicrobial, antiviral, and spasmolytic activity. Flavonoids can scavenge hydroxyl radicals, superoxide anion radicals and lipid peroxy radicals, which high lights many of the flavonoids health-promoting functions in organisms. They are important for the prevention of diseases associated with oxidative damage of membrane, proteins, and DNA. Flavonoids, on the other hand, are potent water-soluble antioxidants and few radical scavengers, which prevent oxidative cell damage and have strong anticancer activity 23. Flavonoids have been referred to as nature’s biological response modifiers because of strong experimental evidence of their inherent ability to modify the body’s reaction to allergen, virus, and carcinogens. They show anti-allergic, anti-inflammatory and anticancer activities 22, 23. Phenolics have antioxidative, antidiabetic, anticarcinogenic, antimicrobial, antiallergic, antimutagenic and anti-inflammatory activities 24, 25. Plants derived natural products such as flavonoids, terpenoids, and steroids etc have received considerable attention in recent years due to their diverse pharmacological properties including antioxidant and antitumor activity 26, 27. Many tannins containing drugs are used in medicine as astringent. They are used in the treatment of burns as they precipitate the proteins of exposed tissues to form a protective covering. They are also medicinally used as healing agents in inflammation, leucorrhoea, gonorrhea, burns, and piles and as an antidote. Tannins have been found to have antiviral, antibacterial, antiparasitic effects, anti-inflammatory, antiulcer and antioxidant property for possible therapeutic applications. Tannins are known to possess general antimicrobial and antioxidant activities. Recent reports show that tannins may have potential value as cytotoxic antineoplastic agents 28. It was also reported that certain tannins were able to inhibit HIV replication selectively and was also used as diuretic25. Coumarin has been used as anticoagulant drugs and to treat lymphedema (Online). Plant steroids are known to be important for their cardiotonic activities, posse’s insecticidal and antimicrobial properties 29.

These observations cited on phytochemical compounds support the present findings on the usefulness of stem and leaf of T. acuminata in various medicaments. It suggests that the T. acuminata plant can be used as antimicrobial activity, antioxidant, antiallergic, anti-inflammatory, antidiabetic, anticarcinogenic, anticancer agents in the future.

From the FT-IR spectral data, the presence of C=O, C-H, C=C, C-O, and O-H was identified. These bonding structures are responsible for the presence of alkyl group, methyl group, alcohol group, ethers, esters, carboxylic acid, and anhydrides.

Among the identified phytochemicals, 9, 12, 15-Octadecatrienoic acid, methyl ester, (Z, Z, Z) have the property of anti-inflammatory and anti-arthritic as reported by earlier workers 30, 31. Phytol is one of the fourteen compounds of the present study. Phytol was observed to have antibacterial activities against Staphylococcus aureus by causing damage to cell membranes as a result there is a leakage of potassium ions from bacterial cells 32. Phytol is key acyclic diterpene alcohol that is a precursor for Vitamins E and K1. It is used along with simple or corn syrup as a hardener in candies. Phytol has detected in T. acuminata leaf, which was also found to be effective at different stages of arthritis. It was found to give good as well as preventive and therapeutic results against arthritis. The results show that reactive oxygen species promoting substances such as phytol constitute a promising novel class of pharmaceuticals for the treatment of rheumatoid arthritis and possibly other chronic inflammatory diseases 33. 9, 12-Octadecadienoic acid (Z-Z) has the property of anti-inflammatory and antiarthritic as reported by earlier works. Squalene has the property of antioxidant.

Recently squalene possesses chemopreventive activity against colon carcinogenesis. The results show that, reactive oxygen species-promising novel class of pharmaceutical for the treatment of rheumatic arthritis and possibly other chronic inflammatory diseases 34, 35. Thus, this type of GC-MS analysis is the first step towards understanding the nature of active principles in this medicinal plant, and this type of study will helpful for further detailed study. Further investigation into the pharmacological importance of T. acuminata and their diversity and detailed phytochemistry may add new knowledge to the information in the traditional medicinal systems.

CONCLUSION: The presence of various bioactive compounds justifies the use of the whole plants for various ailments by traditional practitioners. So it is recommended as a plant of pharmaceutical importance. However, further studies will need to be undertaken to ascertain their bioactivity fully.

ACKNOWLEDGEMENT: We would like to mark Mr. S. Kumaravel, Senior Scientist, Indian Institute of Crop Processing Technology (Ministry of Food Processing Industries, Government of India), Tanjavore, Tamil Nadu for providing all the facilities and support used to carry out the work.