ABSTRACT: In this study, the methanol extract of Cuscuta reflexa Roxb.belonging to the family Convolvulaceae was prepared by successive extraction procedure (petroleum ether and methanol) in soxhlet apparatus. The plant was used traditionally in India, Bangladesh, China, Thailand and other Asian countries for treating various ailments.  It is known to exhibit antiepileptic, antitumor, anti-inflammatory, anticancer, antibacterial, antiviral, antioxidant properties. In the present study our aim was to find out its phytoconstituents in the methanol extract of C. reflexa and also to find out its mutagenic and antimutagenic potential by Ames test against known positive mutagens 2-aminofluorine (2-AF), 4-nitro-o-phenylenediamine (NPD) and sodium azide using Salmonella typhimurium TA 98 and TA 100 bacterial strains both in the presence and absence of metabolic activator S9. The phytochemical investigation ofmethanol extract of C. reflexa Roxb. yielded three flavonoids Isorhamnetin, Isorhamnetin-3-O-glucoside and Isorhamnetin-3-O-robinobioside. The structures of the isolated flavonoids were established by detailed spectral analysis including 2D NMR spectral study. The extract exhibited significant antimutagenic activity againstNPD and sodium azide for S. typhimurium TA98 & TA100strains both in the presence and absence of S9. These results indicated that the extract could counteract the mutagenicity induced by different genotoxic compounds.

INTRODUCTION: Mutations are the cause of innate metabolic defects in cellular system, triggering the morbidity and mortality in living organisms.

A number of synthetic and natural substances are known to act as mutagenic, co-carcinogenic and/or carcinogenic agents. Since, the mutagens are involved in the initiation and promotion of several human diseases including cancer, the significance of novel bioactive phytocompounds in counter-acting the promutagenic and carcinogenic effects are gaining importance 1. Such chemicals that reduce the mutagenicity of physical and chemical mutagens are called antimutagens. The antimutagenic or protective effect has been attributed to many classes of phytocompounds mainly flavonoids and phenolic compounds present in different parts of plants 2.

C. reflexa commonly known as Amarbel (meaning immortal vine) is leafless, rootless and an unusual parasitic vine growing over host plants with inter-twined stems.  It   develops haustoria which are root like and penetrates the host stem to draw water and nourishment. Previous investigations of the chemical constituents of the plant revealed the presence of flavonoids, sterols, triterpenoids, glycosides and phenyl propanoids. The plantis used in traditional system of medicine in India, Bangladesh, China, Thailand and other Asian countries for treating various ailments.

It exhibits many pharmacological activities like antiepileptic, antitumor, anti-inflammatory, anticancer, antibacterial, antiviral, antioxidant, hepatoprotective, hypoglycaemic, relaxant and plasmolytic, α-glucosidase inhibition and in androgen induced alopecia 3, 4. In the present investigation we report the isolation of three flavonoids isorhamnetin (I), isorhamnetin-3-O-glucoside (II), isorhamnetin-3-O-robinobioside (III) for the first time from this plant and the mutagenic and antimutagenic activity of the methanol extract of C. reflexa againstknown mutagens 2-amino fluorene (2-AF), NPD and sodium azide in the presence and absence of metabolic activator S9 in Salmonella typhimurium TA98 and TA100strains.

Plant material:The plant material was collected from the host Cajanus cajan (Fabaceae) in Plamau district, Jharkhand, India in the month of February 2012 and identified at the Indian Botanical Garden, Howrah, India. A voucher specimen (No.377) has been deposited at the Chemistry Division of the Indian Institute of Chemical Biology, Kolkata, India.

Extraction and isolation: The air dried powdered stem (1kg) was subjected to successive soxhlet extraction using petroleum ether and methanol respectively for 48 hrs each. The extract was filtered and then evaporated under reduced pressure.

The methanol extract (85.0 g) was suspended in water and fractionated successively with ethyl acetate and n-butanol. The extracts were evaporated under reduced pressure and lyophilized to give residue of ethyl acetate fraction (8.60 g) and n-butanol fraction (40.00 g). The n-butanol fraction (25.00 g) was subjected to column chromatography over silica gel (100-200 mesh size, Merck India) with gradient elution with chloroform, 2, 5, 10, 15, 20, 25 and 30 % methanol in chloroform led to the isolation of I (15.00mg), II (17.00mg), III (25.00mg). The structure of the compounds was established by detailed spectral analysis (2D NMR).

Preparation of S9 mix: The procedure of Ames et al. (1973) and Garner et al. (1972) were used for the preparation of rat liver homogenate (S9) 5. All the steps were performed at 0°C to 4°C with cold and sterile solutions and glassware. The S9 fractions were distributed in 2 mL aliquots in small sterile plastic tubes, quickly frozen and stored at -80°C. The S9 mix was prepared following the method of Maron and Ames (1983) 6.

Mutagenicity and antimutagenicity assays: Standard plate incorporation tests: Plate incorporation tests were performed as previously described 6 using S. typhimurium tester strains (TA100 and TA98) with and without an exogenous metabolic system: S9 fraction in S9 mix.  The methanol extract of C. reflexa was dissolved in DMSO and different concentrations (10, 100, 1000, 5,000 & 10,000 μg/ plate) of this extract were used for both the mutagenicity and antimutagenicity assays against known positive mutagens, with or without metabolic activation (S9). The plates were incubated for 1 hour and then inverted and placed in a dark vented incubator at 37 °C for 48 hours.  Presence of background lawn on all the plates was confirmed after 48 hours of incubation. Four plates were used for each concentration. After 48 hours of incubation, the revertant colonies on the test plates were counted. A similar experiment was also carried out using liver homogenate (S9) fractions. The spontaneous reversion rates of these Salmonella strains were checked as reported earlier 7. After the specific time of incubation, the numbers of revertant colonies were calculated.

Statistical analysis: GraphPad Instant software (GraphPad software Inc., La Jolla, CA, USA) was used for statistical analyses. All data are expressed as the Mean± SD. The differences between the control and the experimental groups were determined by one-way analysis of variance (ANOVA) and post tests were done using One way ANOVA with Tukey- Kramer Multiple comparison post test to determine the level of significance; p<0.05 and p<0.001 were considered to be significant.

RESULTS AND DISCUSSION: Flavonoids are naturally occurring compounds broadly disseminated as secondary metabolites in plants and one of the most important components of phenolic compounds. They have various biological effects, including free radical scavenging potentials, antioxidant, anti-inflammatory and anticarcinogenic properties 8. They protect human capillaries from free radical damage and also are biologically active against liver toxins, tumors, viruses and other microbes, allergies and inflammation 9. In the present study, we aimed to do phytochemical characterization of the methanol extract of C. reflexa Roxb and find out antimutagenic potential of the methanol extract as well.

Bioassay guided fractionation of the active fractions eluted with chloroform-methanol mixtures from silica gel chromatography led to the isolation of three flavonoids isorhamnetin (I), isorhamnetin-3-O-glucoside (II) and isorhamnetin-3-O-robinobioside (III) along with β- sitosterol and β-sitosterol glucoside. Incidentally the flavonoids (I, II and III) have been isolated for the first time from this species (Fig. 1). 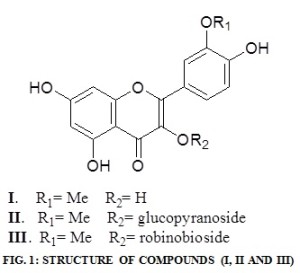 Other studies show that quercetin and kaempferol have been isolated from various extracts of this plant previously 11. Further research is necessary to throw some light on this respect.

Results of antimutagenic assay of the extract of C. reflexa which is shown in Table 2 showed significant antimutagenic effects of the extract for TA98 and TA100 strains both in the presence and absence of S9 in a dose dependent manner. The extract exhibited greater antimutagenic effects for both the strains in presence of S9.The observed antimutagenic activity in the extract against known positive mutagens suggests that this extracts may protect DNA damage from direct and indirect acting mutagens. However, the inhibition of mutagenicity is often complex, acting through multiple mechanisms 12. Our results are in accordance with previous studies where Gholamreza DN et al., (2013) reported that the carbonyl group at C-4, hydroxyl groups at C-5 and C-7 positions of isolated flavonoids might be responsible for antimutagenic activity 13. Since the compounds isolated from the extract of C. reflexa contains similar groups at the above mentioned position, so this might explain their contribution towards the antimutagenic property of the extract.

CONCLUSION: All the above results unambiguously show that the methanol extract of C. reflexa Roxb. has a significant antimutagenic potential against known positive mutagens. However, at this point it is very difficult to speculate the mechanism for antimutagenic property of C. reflexa. The presence of complex mixtures of phytochemicals including flavonoids in this plant can act alone or synergistically, for the antimutagenic property. Further work on isolation and identification of active compounds from the extract and its biochemical characterization are in progress.

ACKNOWLEDGEMENT: Authors are thankful to Dr. Bruce N. Ames, Biochemistry Division, University of California, Berkeley, USA. for providing the bacterial strains and to the National Institute of Pharmaceutical Education and Research (NIPER), India for financial support and the Director of IICB and project director of NIPER  for providing the necessary facilities. Authors are also grateful to the Council of Scientific and Industrial Research for providing  RA to NB, SRF to AK and Emeritus scientist grant to AKG (21(0885)/ 12/EMR-II) and SM (21(0817)/10EMR-II ).  Authors also thank Mr. R. Padmanabhan and Dr. Tapas Sarkar for NMR data, Mr. Kalyan Sarkar for Mass spectra data.