INTRODUCTION: India being a tropical country is blessed with vast biodiversity of natural resources and ancient knowledge for its judicious utilization, which is in great demand all over the world. According to World Health Organization (WHO) the macroscopic and microscopic description of a medicinal plant is the first step towards establishing its identity and purity and should be carried out before any tests are undertaken. In recent years, ethno-botanical and traditional uses of natural compounds, especially those of plant origin, have received much attention as they are well known for their efficacy and are generally believed to be safe for human use 1.

Plants are reported to have anticancer, antimicrobial, ant diabetic, anti inflammation, antioxidant properties 2. New pharmacologically active agents have been searched from natural resources such as plants, animals and microbes leading to discovery of many clinically useful drugs 3. Phytochemical evaluation is one of the tools for quality assessment, which includes preliminary phytochemical screening. HPLC is highly sensitive method for identification and quantification of any chemical in particular samples using UV and visible absorbance 4.

Calotropis procera, a wild growing plant of family Asclepiadaceae. The ethno-botanical uses of Calotropis Procera revealed the diversity of its medicinal uses and popular use of the plant for wide range of common ailments like fever, indigestion, cough, cold, asthma, vomiting etc 5.  The plant is known for its toxic properties like dermatitis and acts like a poison and produces lethal effects 6. Calotropis gigantea (Asclepiadaeceae) is found in dry waste places. Calotropis gigantea is frequently available in India and used for several medication purposes in traditional medicinal system 7. The plant Calotropis gigantea is a plant with many curative principles and other economic values which include fungicidal, insecticidal, indicator of heavy metal etc 8.

Plant Collection and Identification: Fresh plant samples were collected from 2 different localities. The various useful parts like leaves and stem etc. separated and preserved for the study.  Identification of various plants species done by comparing with authenticated herbarium specimens, later confirmed with the help of diagnostic keys and morphological description given in various floras.

5ml of each plant part extract was mixed in 2 ml of chloroform, and concentrated H2SO4 (3ml) was carefully added to form a layer. Formation of reddish brown coloration at the interface shows the positive results for presence of terpenoids.

Anatomical study of plant: The comparative account of anatomical features of plant parts i.e. leaf and stem of two Calotropis species are given in Table 1 and Table 2 and hand sections are shown in Figure 1-4 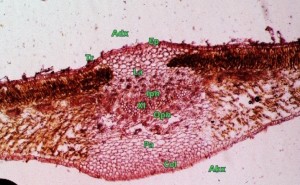 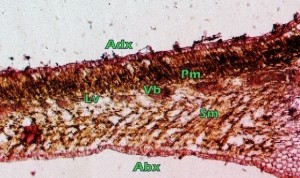 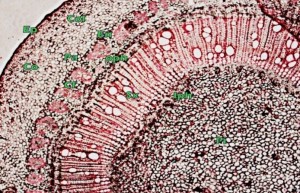 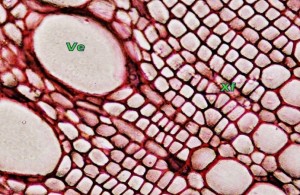 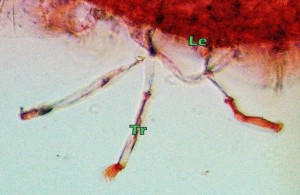 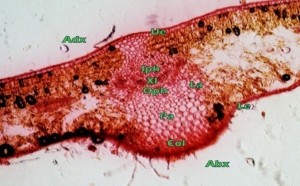 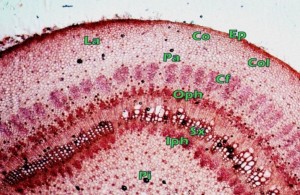 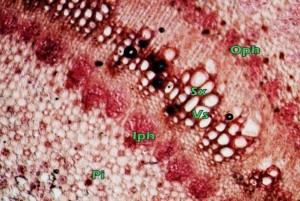 Phytochemical studies:   Different phytochemical constituents analysed from two species of Calotropis are shown in the table given below:

HPLC profile of both species:

Hence, the results reveal that Calotoxin was present in both the species i.e. Calotropis procera and Calotropis gigantea. Results were in accordance with results of Kanojiya and Madhusudanan, 2011. While on the other hand Calotropis gigantea consists of some additional compounds such as Catechol, Calotropagenin and Chyrsin (Phenylpropanoid) respectively. 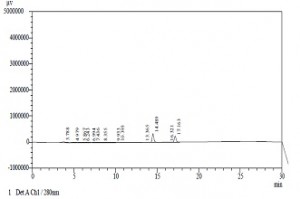 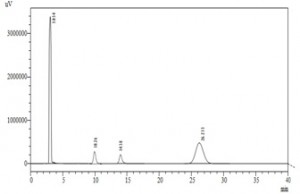 DISCUSSION: Qualitative screening of phytochemical constituents of Calotropis species reveals the presence of alkaloids, glycosides, saponins, tannins, flavonoids, steroids and terpenoids in ethanol extract of both the species and distilled water extracts in C. gigantea leaf extract. Calotropis procera in distilled water revealed the presence of glycosides, saponins, tannins, flavonoids and terpenoids while alkaloids and steroids were absent. Other extracts had varied results. Pharmacological studies have demonstrated that Calotropis possess Calotoxin and Calotropegenin which exhibits a wide range of properties- anti-inflammatory and analgesic activity.

In present study, the observed alkaloids content is found maximum in C. gigantea by observing the peak area and additional alkaloids i.e. Catechol, Calotropagenin and Chyrsin. The anatomical features of stem and leaves of the species of Calotropis which are of diagnostic value have been studied. Focus of study has been towards obtaining the drug from leaves so these have been studied in detail to avoid and prevent adulteration of commercial drug by users. Certain diagnostic features of morphology and anatomy have been found to be useful in the correct identification of the species of Calotropis which are of medicinal value.

CONCLUSION: Approaches like screening, phytochemical profiling of these plants helped to get elite species among two species i.e. C.gigantea. The correct botanical identification of the herbal drugs of commerce shall help to check piracy of these drugs and hence make available true botanicals to the manufacturers of drugs and consumer.