ABSTRACT: The spread of antibiotic resistant pathogens is one of the most serious menaces to successful treatment of microbial diseases. Medicinal and aromatic plants are widely used as traditional medicines and constitute a major source of natural organic compounds. Semecarpus anacardium Linn (Family: Anacardium), is a plant well known for its medicinal value in Ayurvedic and Siddha system of medicine. The plant was selected on the basis of its reported ethnobotanical uses. The present investigation was undertaken to evaluate the phytochemicals and antifungal activity of methanolic extract of Semecarpus anacardium L. nuts oils. The preliminary phytochemical studies showed the presence of alkaloids, saponins, tannins, flavonoids, steroids, glycosides. Different Concentration of methanolic extract (6.25, 12.5, 25, 37.5, 50, 62.5 μg/ml) of S. anacardium were tested against four fungal strains namely Fusarium oxysporum, Rhizctonia solanii, Alternaria spp., and Sclerotium rolfsii. The excellent inhibitory activity was observed against Rhizoctonia solanii (100%) followed by Sclerotium rolfsii (92.59 %), Alternaria spp. (72.34 %) and Fusarium oxysporum (47.19 %) at 62.5 μg/ml. Among different fungi tested R. solanii and Sclerotium rolfsii were found to be more sensitive to crude extract when compared to others. The results of the study provide scientific basis for the use of the plant extract in the future development as antifungal agent.

Nature has provided a complete store house of remedies to cure all ailments of mankind. The natural or herbal remedies are still the backbone of medicines. In fact, plants produce a diverse range of bioactive molecules making them a rich source of different types of medicines. Over the past few decades there has been much interest in natural materials as sources of new antimicrobial agents. Different extracts from traditional medicinal plants have been tested.

Many reports show the effectiveness of traditional herbs against microorganisms; as a result, plants have become one of the bases of modern medicine 1. The exploitation of plants by man for the treatment of diseases has been in practice for a very long time. Herbal drugs, mostly secondarymetabolites constitute a major part in all the traditional system of medicines 2. These secondary metabolites showed various biological activities and act in plant defense mechanisms.  Higher plants, as sources of medicinal compounds continue to play a dominant role in maintenance of human health since antiquities.

Pathogenic fungi are the main infectious agents in plants, causing alterations during developmental stages including post-harvest. In fruit and vegetables, there is a wide variety of fungal genera causing quality problems related to; nutritional value, organoleptic characteristics, and limited shelf life. In addition, in some cases fungi are indirectly responsible for allergic or toxic disorders among consumers because of the production of mycotoxins or allergens.

Generally, phytopathogenic fungi are controlled by synthetic fungicides; however, the use of these is increasingly restricted due to the harmful effects of pesticides on human health and the environment. The increasing demand of production and regulations on the use of agrochemicals and the emergence of pathogens resistant to the products employed, justifies the search for novel active molecules and new control strategies.

Fusarium species are important plant pathogens causing various diseases such as crown rot, head blight, and scab on cereal grains and they may occasionally cause infection in animals.  F. oxysporum strains are ubiquitous soil inhabitants that have the ability to exist as saprophytes, and degrade lignin4, 5 and complex carbohydrates 6, 7, 8 associated with soil debris.

F. oxysporum is also pathogenic to humans. The diseases associated with Fusarium include:

Rhizoctonia solani is a soil-borne fungal pathogen that causes disease in a wide range of plants worldwide. Strains of the fungus are traditionally grouped into genetically isolated anastomosis groups (AGs) based on hyphal anastomosis reactions.

Although these different AGs show differences in their host ranges, generally R. solanii is a phytopathogenic species with a wide spectrum of hosts. It has the ability to grow as a saprotroph, which further complicates its behaviour as a parasite. The losses caused by R. solanii are very important and need a sustainable management strategy. The patchy appearance of the disease caused by this pathogen is well-known. The severity of infection can vary and for highly infected patches, severity of the infection can be very devastating to the farmer. Some of these consequences are: major yield losses (ranging from 25%-100%), increased soil tare (because the soil sticks to the fungus' mycelium), and poor industrial quality of the crops based on increased levels of sodium, potassium and nitrogen. Due to the vast number of hosts that the pathogen attacks, these consequences are numerous and detrimental to a variety of crops.Bottom of Form

Alternaria is a genus of ascomycete fungi. Alternaria species are known as major plant pathogens. They are also common allergens in humans, growing indoors and causing hay fever or hypersensitivity reactions that sometimes lead to asthma. They readily cause opportunistic infections in immunocompromised people such as AIDS patients.

It is ubiquitous and includes large number of saproprobes and pathogens. Alternaria spp. are one of the major contaminants of small grains causing “black point” disease. They are normal agents of decay and decomposition. The spores are airborne and found in the soil and water, as well as indoors and on objects.

The club-shaped spores are single or form long chains. They can grow thick colonies which are usually green, black, or gray 9. At least 20% of agricultural spoilage is caused by Alternaria species; most severe losses may reach up to 80% of yield, though 9.

Due to their growth even at low temperature, Alternaria spp. are well known post harvest pathogens, responsible for spoilage of food during refrigerated transport and storage10. Economical losses are mainly related to quality reduction due to decreased nutritive value, discoloration and insipidness 11.

S. rolfsii is a ubiquitous soil-borne pathogen characterized by presence of whitish mat of mycelia and formation of brownish sclerotia. The sclerotia constitute the primary inoculum and over-wintering structure of the pathogen. It causes disease on a wide range of agricultural and horticultural crops. Susceptible agricultural hosts include sweet potato (Ipomea batatas), pumpkin (Cucurbita pepo L.), corn (Zea mays), wheat (Triticum vulgare) and peanut (Arachis hypogea). Horticultural crops affected by the fungus are included in the genera Narcissus, Iris, Lilium, Zinnia, and Chrysanthemum 13.

Semecarpus anacardium Linn. (Family: Anacardiaceae) is a plant well-known for its medicinal value in Ayurvedic and Siddha system of medicine. Chemical and phytochemical analyses of its nut reveal the presence of biflavonoids, phenolic compounds, bhilawanols, minerals, vitamins and amino acids. A variety of nut extract preparations from this source are effective against many diseases, viz., arthritis, tumors, infections and so on.

Semecarpus anacardium, also known as oriental cashew or Indian cashew, is indigenous to India. It is usually found growing in the eastern portion of the country.   The nut is commonly known as "marking nut" and in the vernacular as "Ballataka" or "Bhilwa". The genus Semecarpus contains some 40 species distributed throughout the tropical regions of the world. It is also widely distributed in the forests of Similpal Biosphere Reserve, Orissa. The tribals of Similpal Biosphere Reserve use it for curing headache, hydrocoel and as antiseptic etc. In this study we have evaluated the antimicrobial activity and phytochemical properties of nuts and oils of Semecarpus anacardium.

It should not be used in small children, very old persons, pregnant women and individuals of predominant pitta constitution. The use of the same should be restricted in summer season.

It is also use as a brain tonic, blood purifier and haematinic tonic. Semecarpus anacardium is used for various medicinal properties. The fruit and nut extract shows various activities like antiatherogenic, antiinflammatory, antioxidant, antimicrobial, anti-reproductive, CNS stimulant, hypoglycemic, anticarcinogenic and hair growth promoter. More efforts are needed to study the traditional uses of the plant and the subsequent validation of activity and the mechanism of action. Reports have shown noticeable impact on illnesses related to the heart, blood pressure, respiration, cancer and neurological disorders14.

Due to the toxic activities, large size, allergic effect are loss of traditional knowledge generation by generation, most of the peoples don’t know the importance and proper use of Semecarpus anacardium, that’s why now a day’s peoples are avoiding to grow it in surrounding area. Now Semecarpus anacardium plant has become a wild plant, it found only in forest area.

Collection of plant material:  The fresh and healthy nuts of Semecarpus anacardium were collected between June and August, 2013 from forest of Parasnath, Giridih district of Ranchi, Jharkhand, India.

Extraction of plant extract: Crude plant extract was prepared by Soxhlet extraction method. 15gm of the shade dried nuts of this plant was crushed with the help of mortar-pestle and plant material was uniformly packed into a thimble paper and extracted with 250ml of methanol. The process of extraction continues for till the solvent in siphon tube of an extractor become colorless (about 48 hours). In order to evaporate excessive solvent, the sample was placed in incubator at 30-40 ºC till solvent evaporate. The extract left over appear to be thick, oily and sticky in nature but the colour was black. The extracts were preserved in sterile bottles at 4°C.

Preparation of the Potato Dextrose Agar Medium: The weight amount of potato slice was boiled with a little amount of distilled water for 30 minutes and applied for course filtration with the help of filter paper. The required amount of dextrose and agar were dissolved in a conical flask containing potato filtrate final volume was made by adding water and pH was adjusted.

Antifungal assay: In vitro antifungal screening was performed by food poisoning technique against four fungal strains at different concentrations of plantextracts (6.25, 12.5, 25, 37.5, 50 and 62.5 μg/ml) were mixed with Potato Dextrose Agar media and the results were compared with control (not containing plant extract). Zone of mycelium (fungal) spreading was measured with the help of scale after 72 hours of incubation at 27oC. All experiment was performed in aseptic sterilized condition.

The results of the phytochemical screening of methanolic extract of S. anacardium are shown in Table 1. The results of the phytochemical screening of Semecarpus anacardium have reveals the presence of various metabolites like alkaloids, glycosides, phenolic compound, Saponins, steroids, carbohydrates, tannins, flavonoids and absence of Anthraquinones, phlobatanin. Thus the preliminary tests may be useful in detection of the bioactive principles and subsequently lead to identification and quantification of bioactive compounds. 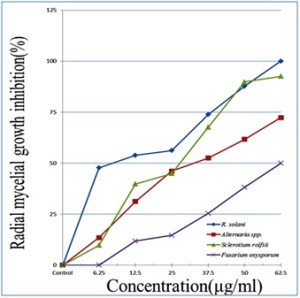 DISCUSSION: Plants are important source of potentially useful drugs for the development of new chemotherapeutic agent 17.The first step towards this goal is the in vitro antibacterial, anti-fungal, antihelmenthic and anti-inflammatory properties 18.

The present result may be correlated with presence of different types of phytochemicals alkaloids, glycosides, phenolic compound, Saponins, steroids, carbohydrates, tannins, flavonoids etc. Specially nut of Semecarpus anacardium is very rich in phenol contents which is involved in multiple mode of action, for example degradation of cell wall, disruption  of  cytoplasmic membrane, damage of membrane protein and integrated enzymes, leakage of cellular components, Depletion of the proton motive force alteration in nutrient uptake and electron transport19, 20.

Similar finding have also been reported for efficacy of plant extracts against fungal growth by different workers 21, 22.

CONCLUSION: Folk herbal medicines are important source of drug discovery as they are widely used for the control of plant pathogens and human related diseases. Semecarpus anacardium hold important position in traditional system of medicines and their anti-fungal activities have been proved in present study under in vitro conditions. Their trial needs further to be established in field condition before any final verdict.

ACKNOWLEDGEMENTS: Authors are heartily thankful to Dr. R. K. Pandey, Head of Botany Department, Ranchi University for providing all necessary facilities to carry out this research work. We also acknowledge UGC for providing fund under Major Research Project for proposal on testing the efficacy of some anticancer plant extract including Semecarpus anacardium against Breast Cancer Cell lines.

All © 2013 are reserved by International Journal of Pharmaceutical Sciences and Research. This Journal licensed under a Creative Commons Attribution-NonCommercial-ShareAlike 3.0 Unported License