ABSTRACT: In recent years, there is an increasing interest in finding antioxidant phytochemicals for the prevention and treatment of complex diseases like diabetes, cancer, and atherosclerosis, which are associated with excessive biological oxidative stress. Plants are rich source of natural antioxidants that inhibit the propagation of free radical reactions and protect the human body from degenerative diseases. For the present study, entire vine (aerial part) of Cyclea peltata was selected based on their extensive use in folk medicine and ayurvedic medicine to cure various ailments. Hexane, chloroform, ethyl acetate, methanol and water extracts of Cyclea peltata were subjected to various in-vitro antioxidant activity studies. In most of the antioxidant parameters, ethyl acetate and methanol extracts showed potent activity and chloroform extract showed minimum antioxidant activity. From these studies, it can be concluded that ethyl acetate and methanol extracts of Cyclea peltata could be used as a source of potent natural antioxidant that can be used in various plant-based drugs or formulations for the treatment of complex diseases caused due to excessive biological oxidative stress.

INTRODUCTION: Oxidation and production of free radicals are an integral part of normal cell metabolism, but become deleterious when not being eliminated by the endogenous defense system. An imbalance between reactive oxygen species and the antioxidant defense mechanisms of a cell leads to excessive production of oxygen metabolites, creating a condition frequently termed as ‘Oxidative Stress’ 1. Excessive oxidative stress has been implicated in the pathology and complications of diabetes mellitus 2.

There are increasing evidence to suggest that the free radicals induce oxidative damage of proteins, DNA and lipids, which are also associated with chronic degenerative diseases viz., cancer 3, Cardiovascular diseases 4 and ulcerative colitis 5. Oxygen-derived free radicals such as superoxide, anions, hydroxyl radicals, and hydrogen peroxide are cytotoxic and give rise to tissue injuries caused due to cellular dysfunction or cell death. Diabetes mellitus and its associated complications are one such disorder which may attribute to excessive biological oxidative stress 6.

India has an ancient heritage of traditional medicine. WHO estimates that about 80% of people living in developing countries rely almost exclusively on traditional medicine 7. Herbal medicines have been the basis of treatment and cure for various diseases and physiological conditions in traditional methods practiced such as Ayurveda, Unani, Siddha, and folk medicine 8. Plant phenolics, in particular, phenolic acids, tannins, and flavonoids are known to be potent antioxidants and occur in vegetables, fruits, nuts, seeds, roots, and barks. In addition to their antioxidant properties, these compounds display a wide variety of pharmacological activities such as anti-inflammatory, anti-atherosclerotic, anti-tumor, anti-mutagenic, anti-carcinogenic, anti-bacterial or anti-viral activities, which may explain, at least in part, its use as an alternative or supportive treatments in various degenerative diseases 9.

In recent years, there is an increasing interest in finding antioxidant phytochemicals, because they can inhibit the propagation of free radical reactions, protect the human body from diseases 10. Antioxidant-based drugs or formulations for the prevention and treatment of complex diseases like diabetes, cancer, and atherosclerosis have appeared during the last three decades 11. This has attracted a great deal of research interest in natural antioxidants. The majority of the active antioxidant compounds are flavonoids, isoflavones, flavones, anthocyanins, coumarins, lignans, catechins, and isocatechins 12.

Cyclea peltata (Lam.) Hook. f. & Thomson. That belongs to family Menispermaceae is a slender twining shrub 19 commonly known as Patha or Rajapatha in Sanskrit and Kariballi in Kannada is found throughout South and East India. Tribal people use this plant for treating muscular sprain and wounds. In Ayurvedic system of medicine, tuberous roots are being used in the treatment of urinary troubles 20, asthma21, jaundice 21, fever 21 and stomachache 22.

Given this, the present study aims at the investigation of phytochemical screening and antioxidant activities of Cyclea peltata (aerial part) extracts. These investigations may even become the base for the development of antioxidant-based herbal drugs or formulations for treating complex diseases and thereby usage of synthetic drugs; its associated side effects could be avoided.

The herbarium specimen was made and was deposited in the Department of Pharmacognosy, JSS College of Pharmacy, Mysuru with voucher specimen number Cyclea peltata JSSCP/PCOG/ HRBM-06. For the study, only the aerial part of Cyclea peltata (i.e., leaves and stem together) was selected. The fresh plant material was washed under running tap water to remove the any adhered dust and shade dried in room temperature for 7 days and ground to a coarse powder of mesh size 40-60 and stored in an airtight container till use.

Phytochemical Screening: Phytochemicals are the wide variety of secondary metabolites produced by plants. These are called as the active chemical constituents of plants. They are tannins, alkaloids, saponins, flavonoids, phytosterols, triterpenoids, and cardiac glycosides. The Presence of these active chemical constituents in plant extracts are determined by preliminary qualitative phytochemical screening according to the procedures described by Mukherjee 7, Evans 24, and Harborne 25.

DPPH Radical Scavenging Activity: Free radical scavenging potentials of the extracts were tested against the methanolic solution of α-α-diphenyl-β-picrylhydrazyl (DPPH) 9. Different concentrations of various extracts and ascorbic acid were taken in 1ml ethanol and added to 3 ml of 100 μM DPPH in methanol to get the concentration of extracts from 5 μg/ml to 800 μg/ml and ascorbic acid from 1.25 μg/ml to 5 μg/ml. The mixture was allowed to stand at room temperature for 20 min. The control was prepared as above without extract. The readings were read at 517 nm using methanol as blank. The absorbance of control was first noted at 517 nm. The change in absorbance of the samples was measured. Scavenging activity was expressed as % Antiradical activity calculated by the formula {(Control Abs. - Sample Abs.) / Control Abs.} × 100. Each experiment was carried out in triplicate, and the results are expressed as mean % antiradical activity ± SD 9.

Nitric Oxide Scavenging Activity: Sodium nitroprusside (SNP 10 mM) in phosphate buffered saline was mixed with different concentrations of CpA extract [Hexane, Chloroform, Ethyl acetate, Methanol and Aqueous extracts of aerial part of Cyclea peltata] (10 μg/ml to 600 μg/ml) in ethanol and incubated at 25 ºC for 180 min. Ascorbic acid, instead of the extract was used as a positive control in the concentration of 25 μg/ml to 125 μg/ml.

Hydroxyl Radical Scavenging Activity: The mixture containing CpA extract [Hexane, Chloroform, Ethyl acetate, Methanol and Aqueous extracts of aerial part of Cyclea peltata] (10 μg to 80 μg), 2.8 mM deoxy-Dals- Ribose, and 0.2 mM phenylhydrazine was incubated for 2 hours at 370C in a water bath. Gallic acid, was employed as a positive control (0.5 μg to 4 μg). Hydroxyl radical scavenging was measured by the TBARS method of Ohkawa et al. 26 To each test tube, 1 ml of TCA (2.8%, % w/v), containing 1% TBA, was added. Further, the test tubes were heated in a water bath for 30 min and cooled at room temperature. A mixture prepared as above without deoxy-D- ribose served as blank. Absorbance was read at 532 nm. Hydroxyl radical scavenging activity was calculated with the following equation: percentage hydroxyl radical scavenging activity = {(C- S)/C} × 100, Where C is the absorbance of the control and S is the absorbance of the sample. All experiments were performed in triplicate, and the results are expressed as mean ± SD 26.

Lipid Peroxidation Assay: Egg phospatidyl-choline (20 mg) in chloroform (2 ml) was dried under vacuum in a rotary evaporator to give a thin homogenous film and further dispersed in normal saline (5 ml) with a vortex mixer. The mixture was sonicated to get a homogeneous suspension of liposomes. Lipid peroxidation was initiated by adding 0.05 mM ascorbic acid into a mixture containing liposome (0.1ml), 150 mM potassium chloride, 0.2 mM ferric chloride, CpA extract [Hexane, Chloroform, Ethyl acetate, Methanol and Aqueous extracts of aerial part of Cyclea peltata] (10 to 80 μg/ml), or silymarin (1 to 10 μg) in a total volume of 1 ml 27.

The blank was prepared in the same manner but, without liposomes. The pink chromogen was extracted with 1 ml of n-butanol. The absorbance was read at 532 nm. Anti-lipid peroxidation activity was calculated with the following equation: % Anti-lipid peroxidation activity = {(C- S)/C} × 100, Where C is the absorbance of the control and S is the absorbance of the sample. All experiments were carried out in triplicate, and results are expressed as mean ± SD 27. 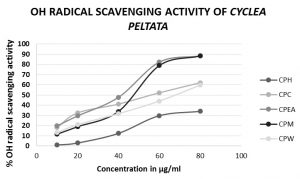 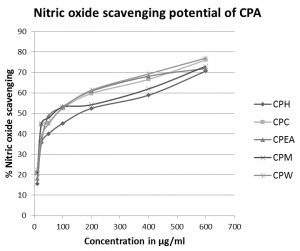 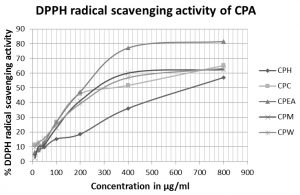 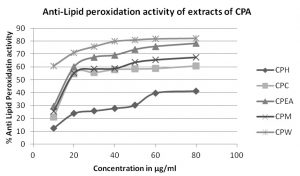 The antioxidant activity of different extracts in all the parameters tested viz. DPPH radical scavenging activity, OH radical scavenging activity, NO oxide scavenging activity, and Lipid peroxidation activity were found in the order from lower to higher in the order CPH < CPC < CPW < CPM < CPEA. i.e., hexane extract showed least antioxidant potential, and ethyl acetate extract exhibited potent antioxidant potential. CPM (methanol extract) which has shown better antioxidant potential other than water and chloroform extracts, but less than the CPEA (ethyl acetate extract). The reason for this may be, as per the phytochemical screening, methanol being a polar solvent extracted all types of constituents present in the plant material, i.e. CPM contains sterols, alkaloids, glycosides, and carbohydrates, which are deemed to be antioxidants, whereas CPEA not extracted glycosides and carbohydrates.

CONCLUSION: In most of the antioxidant parameters ethyl acetate and methanol extracts showed potent activity, and chloroform extract showed minimum antioxidant activity. From these studies, it can be concluded that ethyl acetate and methanol extracts of Cyclea peltata could be used as a source of potent natural antioxidant that can be used in various plant-based drugs or formulations for the treatment of complex diseases caused due to excessive biological oxidative stress.

ACKNOWLEDGEMENT: The authors are thankful to, The Chairperson, Department of Microbiology, University of Mysore, Manasagangotri, Mysuru for providing necessary infrastructure and facilities carry out the research.

CONFLICTS OF INTEREST: The authors are declared that there is no conflicts of interest exist.