ABSTRACT: The genus Viburnum punctatum Linn. Under the family Caprifoliaceae (formerly) and Adoxaceae (currently) consists of about 200 species throughout the world. Many of these species have been recognized for their medicinal properties from very early times of this century. The aerial parts of  Viburnum punctatum was collected from Nilgiri hills, Tamilnadu, India and was authenticated by Dr. A. B. Rema Shree, Dy. Project Director, Kottakkal Arya Vaidyasala, Kottakkal, Kerala, India. Phytochemical screening of the aerial parts of Viburnum punctatum was carried out. Result indicated that the aqueous extract of the plant material contain carbohydrate, glycosides, phenolic compounds, saponins and flavonoids. Antioxidant activity of the aqueous extract of the aerial parts of the plant material was carried out by DPPH scavenging assay and Reducing Power method and it found to have a good antioxidant activity.

Collection of plant materials: The aerial parts of Viburnum punctatum were collected and washed well to remove any adhering foreign particles and soil materials. The washed plant material was dried under shade. After drying it was coarsely powdered

Hot continuous extraction: The solvent is heated to reflux. The solvent vapors travels up a distillation on and floods into the chamber housing the thimble of solid chamber containing the solid material slowly fill with warm solvent. The chamber is automatically emptied by a siphon side arm after chamber is full

The powdered plant material was extracted with 2-3 litres of distilled water by continuous hot percolation using Soxhlet apparatus. After completion of extraction, it was filtered and the solvent was removed by distillation under pressure. The extract was stored in desiccator 2.

Test for Carbohydrates & Glycosides: The minimum amount of extracts were dissolved in 5ml of distilled water and filtered. The filtrate was subjected to test for carbohydrates & glycosides.

Test for Phytosterol (Libermann Burchard Test): One gram of the extract was dissolved in few drops of dry acetic acid; 3 ml of acetic anhydride was added followed by few drops of concentrated sulphuric acid. Appearance of bluish green colour showed the presences of phytosterol.

Test for Fixed Oil & Fats: Small quantities of various extracts were separately pressed between two filter papers. No oil stain on the paper indicated the absence of fixed oil.

Few drops of 0.5N alcoholic potassium hydroxide were added to small quantity of various extracts along with a drop of phenolphthalein. Mixture was heated on water bath for 1-2 hours. No soap formation, neutralization of alkali indicated the absence of fixed oil and fats.

Foam test: - The extracts were diluted with 20ml of distilled water and it was agitated on graduated cylinder for 15 minutes. The presence of saponins was indicated by formation of 1cm layer of foam.

Test for Tannins and Phenolic Compounds: Small quantities of various extracts were taken separately in water and tested for presence of phenolic compounds and treated with

Test for Lignan: With alcoholic solution of phloroglucinol & hydrochloric acid the appearance of red color showed the presence of lignan.

Test for Proteins and Free Amino Acids: Dissolved small quantities of various extracts in few ml of water and treated with.

DPPH Radical scavenging test: The free radical scavenging activity of the samples were determined by using 2, 2 Diphenyl-1-picryl hydrazyl radical (DPPH) using UV-Spectrometry4 at 517nm. The DPPH solution was prepared in 95% methanol. The samples were mixed with 95% methanol to prepare the stock solution (10mg/100ml or 100mg/ml). From the stock solution 2ml, 4ml, 6ml, 8ml and 10ml of this solution were taken in five test tubes and by serial dilution with same solvent were made the final volume of each test tube up to 10ml whose concentration was then 20mg/ml, 40mg/ml, 60mg/ml, 80mg/ml and 100mg/ml respectively.

Freshly prepared DPPH solution (0.004% w/v) was added in each of these test tubes. Containing samples (20mg/ml, 40mg/ml, 60mg/ml, 80mg/ml and 100mg/ml) and after 10 min, the absorbance was taken at 517nm, using a spectrophotometer (SHIMADZU UV-1700, UV-visible spectrophotometer). Ascorbic acid was used as a reference standard. It is dissolved in distilled water to make stock solution with the same concentration of samples. Control sample was prepared without samples and reference ascorbic acid. 95% methanol was used as blank % scavenging of the DPPH free radical was measured using following equation.

Reducing Power Method: The assay of reducing power method 5-6 is one to determine the antioxidant activity. Various concentrations of the samples solution mixed with 2.5 ml phosphate buffer (0.2M, pH 6.6) and 2.5 ml Potassium Ferricyanide [K3Fe (CN6)] (10g/l), the mixture was incubated at 50°C for 20 minutes. 2.5 ml of Tri chloroacetic acid (100g/l) was added to mixture. This was centrifuged at 3000 rpm for 10 min. Finally 2.5 ml of the supernatant solution was mixed with 2.5 ml of distilled water and 0.5 ml FeCl3 (lg/L) and absorbance measured at 700nm in UV-visible spectrophotometer (SHIMADZU UV-1700, UV-visible spectrophotometer). Ascorbic acid was used as standard and phosphate buffer used as blank.

Ascorbic acid at various concentrations was used as standard and phosphate buffer used as blank. Increased absorbance of the reaction mixture indicates increase in reducing power. Reducing power was measured by varying the concentration of the samples 7-8.

RESULT AND DISCUSSION: The phytochemical investigations 9-10 of the aqueous extract show the presence of carbohydrate, glycosides, phenolic compounds, saponins and flavonoids. Table 1 represents the various phytochemicals present in the plant extract.

Reducing power of Ethanol extract of as compared to Ascorbic acid.  Results are mean ± SD (n =3) 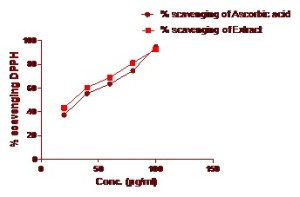 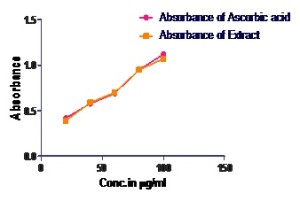 From the present work, it could be concluded that the solvent play a vital role in the extraction of the plant constituents. As water is highly polar, they contain high yield of phenolic compounds and flavonoids as compared to the other solvents. An aqueous extract of the aerial parts of Viburnum punctatum was shown highest antioxidant activity which was analyzed by DPPH scavenging assay and reducing power method as compared to the standard Ascorbic acid. The antioxidant activity could be correlated with the poly phenolic components and flavonoids present in the extract. The result obtained from these methods provide some important factors responsible for the antioxidant potential of Viburnum punctatum.17-20

ACKNOWLEDGEMENT: The authors are thankful to the management of Devaki Amma Memorial College of Pharmacy, Pulliparamba P. O, Malappuram Dist, Kerala, India for providing laboratory facilities to carry out the research work.