ABSTRACT: Garcinia imberti Bourd. a critically endangered tree belongs to the family Clusiaceae found only in India. The phytochemicals and antioxidant studies were carried out for the methanolic extracts of Garcinia imberti leaves and stem bark using DPPH and ABTS radical scavenging assay. Preliminary phytochemical screening of methanolic extracts of Garcinia imberti revealed the presence of various bioactive components like alkaloids, flavanoids, steroids, glycosides, phenols, saponins, terpenoids, resins, carbohydrates and tannins in both leaves and stem bark. The quantitative analysis of phytochemicals of the extracts showed the presence of high amount of tannins (0.92 ± 0.23mg/gm) and alkaloids (0.83 ± 0.48mg/gm) in leaf and high concentration of flavanoids (0.65±0.16mg/gm) and tannins (0.78±1.12mg/gm) in bark extract. The result of the present study concluded that the methanolic extracts of Garcinia imberti leaves and stem bark possess antioxidant activity due to the presence of significant amount of phenolic compounds which are the major contributors of antioxidant activity.  The finding of this study suggests that the studied plant is a potential source of natural antioxidant that could have great importance as therapeutic agents in preventing or slowing the progress of oxidative stress related degenerative diseases.

INTRODUCTION: Plants are one of the most important sources of natural medicine and number of modern drugs has been isolated from them. Over 80% of world population relied on the traditional form of medicine for their basic health care 1. Use of medicinal herbs has become an important part of daily life despite the progress in modern medical and pharmaceutical research 2. Epidemiological studies on medicinal plants support that the constituents such as phenols, flavanoids, alkaloids, tannins etc. are capable of exerting protective effect against oxidative stress 3.

They are effective in treatment of several human diseases such as cancer, arthritis, neurodegenerative disorders, aging process and diabetes 4. In recent years the research on medicinal plants has become more important to know their constituents and biological activity 5. Therefore it is also necessary to have knowledge of chemical constituents of plants before using it as medicine.

Garcinia imberti Bourd. a critically endangered tree belongs to the family Clusiaceae found only in India. The tree grows up to 15m tall in evergreen forest of Western Ghats, Agasthyamalai, Kerala. The plant is dioecious and has yellowish bark with mild fragrance. Leaves are simple, elliptic, green turns grayish on drying, midrib prominent on both surfaces. Male flower in terminal fascicles of 1 to 9, pedicels short, sepals 4 greenish yellow, petals 4, yellow, orbicular to broadly ovate, female flowers terminal, solitary or in pairs, berries globes and smooth.

Recently, phytochemical analysis and therapeutical activity of many species of Garcinia have been carried out by many scientists. The chemical constituents and biological activities of fruit rind of Garcinia indica has been reported 6, 7. Garcinol, a polyisoprenylated benzophenone purified from G. indica fruit rind displays antioxidant, anticancer, antiulcer and anti-obesity properties8, 9, 10, 11. Preliminary phytochemicals of Garcinia gummigutta has been analyzed and reported 12. The essential oil composition and antimicrobial activity of Garcinia imberti has been studied 13. There is no report on the medicinal use and phytochemicals of leaf and stem bark extracts of G. imberti.  In this context, the present study were focused on the screening for the presence of active principles and antioxidant activity of methanolic extract of G.imberti leaves and stem bark. Natural products of endangered plants may also provide a new source of therapeutic agent.

Freshly collected leaves and stem bark of G. imberti were washed, shade dried, powdered and extracted with methanol. The crude methanol extract was concentrated using rotary evaporator. The dried extract obtained was dissolved in known amount of methanol and used for the phytochemical analysis and antioxidant assay.

The methanolic extract were used for preliminary screening of active constituents such as proteins, carbohydrates, phenols, flavanoids, alkaliods, tannins, steroids, resins, saponins, terpenoids and glycosides by following the standard procedure to understand the nature of phytoconstituents present 14, 15.

The total phenolic content in methanolic extracts of G. imberti leaf and stem bark were determined according to method employed by using catechol as standard 16. One milliliter of plant extracts was mixed with 1mL of FC reagent and 3mL of 20% Na2Co3 solution. The mixture was incubated for 40min at room temperature and absorbance was measured at 760nm.

The tannin content of samples was determined calorimetrically using Folin–Denis reagent 18.  To 1mL of plant extracts, 75mL of distilled water, 5mL of Folin-Denis reagent and 10mL of sodium carbonate was added, read the absorbance at 700nm after 30min. The standard graph was prepared by using standard Tannic acid.

The total alkaloid content of the samples was measured using 1, 10-phenanthroline method 19.  The reaction mixture contained 1mL plant extract, 1mL of 0.025 M FeCl3 in 0.5 M Hydrochloric acid and 1mL of 0.05 M of 1, 10-phenanthroline in ethanol. The mixture was incubated for 30 min in hot water bath with maintained temperature of 70ºC. The absorbance of red colored complex was measured at 510nm against reagent blank. Alkaloid contents were estimated and it was calculated with the help of standard curve of colchicines.

Antioxidant activity of methanolic extracts of G. imberti leaf and stem bark was estimated using DPPH 20.  One mL of extract prepared in multiple concentrations (50-300µg/mL) was mixed with 3mL of DPPH prepared in methanol. The mixture was incubated at 370C for 30min and absorbance was measured at 517nm using a spectrophotometer. A decrease in DPPH solution absorbance indicates an increase in radical scavenging activity.  The percent of DPPH radical scavenging activity of the sample was calculated.

The radical-scavenging ability of extracts was also determined by ABTS radical cation decoloration assay21. ABTS was dissolved in water to 7mM concentration with potassium persulfate (2.45mM) and incubate in the dark for 16 hours at room temperature before use and the solution was diluted in methanol to get the absorbance 0.7 ± 0.02 at 734nm. After adding 1mL of diluted ABTS solution to different aliquots of sample in methanolic extracts, the absorbance was measured at 30oC after 30min of initial mixing.

The experiments were conducted in triplicates and data were expressed as mean ±SD. It was analyzed using mega stat model 23.

RESULTS AND DISCUSSION: The therapeutic effect of plants is because of the presence of active compounds 24. In the present study the preliminary phytochemical analysis revealed the presence of phenols, terpenoids and flavanoids in mild level. Alkaloids, carbohydrate and glycosides were present in moderate level.

Table 2 summarized the results of quantitative assessment of phytochemical composition of methanolic extracts G. imberti leaf and stem bark with a focus on phenols, flavanoids, tannins and alkaloids.  Phenolic compounds are major plant secondary metabolite which has several biological functions. The total phenolic contents of the leaf and stem bark samples were calculated with a standard curve using Catechol. The results indicate that phenol content is higher in leaf extract (0.71mg/gm) and moderate in stem bark extracts (0.62mg/gm). The concentration of flavanoids in studied samples was determined with aluminum chloride by using calorimetric method and the total flavanoid content of methanolic extract of leaf (0.82 mg/gm) was higher than stem bark (0.65 mg/gm).

Tannins are the most abundant antioxidants and they exhibit many biologically important functions which include protection against oxidative stress and degenerative diseases 25. The tannin content of methanolic leaf and stem bark extracts was 0.92mg/gm and 0.78mg/gm respectively. Alkaloids have been reported to be the most efficient therapeutically active substances 26.

Pure alkaloids and their derivatives are known to have many pharmaceutical properties. According to the present result (Table 2), the total alkaloid content were found to be maximum in leaf extract (0.83mg/gm) and minimum in stem bark (0.55mg/ml). The result obtained in the quantitative analysis revealed that both the studied sample extracts have considerable amount of phenol, flavanoids, tannins and alkaloids content. However, tannins were found in higher levels both in leaf and stem bark.

The DPPH and ABTS free radical scavenging assay are the commonly used methods for evaluation of proton donating antioxidants. DPPH is stable at room temperature and accepts electron or hydrogen free radical to form a stable diamagnetic molecule.  This ability of DPPH to undergo reduction by an antioxidant is measured in terms of decrease in its absorbance at 517nm 27.  DPPH is stable nitrogen centered free radical which produces violet in ethanol solution. It was reduced to a yellow coloured product, diphenyl picryl hydrazine, with the addition of the fractions in a concentration dependent manner. The reduction in number of DPPH molecule can be correlated with the number of available hydroxyl group28.

Antioxidant capacity of extracts was determined based on the reaction of DPPH absorbance by calculating percentage of antioxidant activity (Fig.1). Concentration of the sample necessary to decrease initial concentration of DPPH (IC50) under the experimental condition was calculated. Lower value of IC50 indicates higher antioxidant activity. The IC50 values of the methanolic stem bark, leaf extract and standard was found to be 274.24µg/mL, 218.11µg/mL and 137.58µg/mL respectively. The extracts were found to have less antioxidant activity than the standard. Radical scavenging activity is likely to be related to the nature of phytochemicals and their hydrogen donating ability to reactive free radicals converting them into more stable.

ABTS assay is based on the inhibition of the absorbance of the radical cation. ABTS is converted to its radical cation which is blue in color by addition of potassium persulfate and absorbs light at 734nm. During the reaction, blue colored ABTS radical cation change to colorless when the free radicals were scavenged by antioxidant29.

According to the present investigation, the methanolic extract of leaf has highest activity when compared to stem bark extract (Fig.2).  The IC50 value was found to be 118.00µg/mL, 198.74µg/mL and 232.14µg/mL in standard, leaf and stem bark respectively. 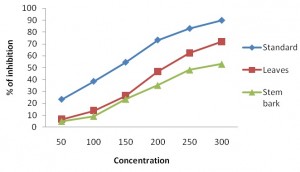 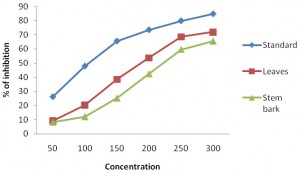 CONCLUSION: Plants produce a very diverse group of secondary metabolites with antioxidant potential. Antioxidants block the action of free radicals which have been implicated in the prevention of many diseases and in the aging process. Alkaloids, carbohydrates, proteins, saponins, glycosides, phenols, steroids, terpenoids, tannins, flavanoids and resins were analyzed qualitatively which are known to possess antioxidant activities and these phytochemicals are valuable sources of raw material for traditional medicine 30. Humulene and beta-caryophyllene are the major constituents of G. imberti stem bark oil 13.The present study also exhibited significant antioxidant activity in both DPPH and ABTS assay. Leaf showed the highest antioxidant activity compared to stem bark. The antioxidant activity may be due to the presence of significant amount of phenolic compounds which are the major contributors of antioxidant activity.  The finding of this study suggests that the studied plant is a potential source of natural antioxidant that could have great importance as therapeutic agents in preventing or slowing the progress of oxidative stress related degenerative diseases. Further investigation on the isolation and characterization of the antioxidant constituent is required. The IUCN was declared that the population of G.imberti was declared as critically endangered and there is an urgent need to conserve these valuable tree species before extinction.

ACKNOWLEDGEMENT: We extend our thanks to the Ministry of Environment and Forest, Government of India for providing research grant under the All India Coordinated Project (AICRP) on Reproductive Biology of  RET Tree species ( F No. 22/10/2010-RE) to undertake the present investigation. The authors are also thankful to the Department of Botany, Bangalore University,  Bangalore - 560056 for providing facilities and Kerala Forest Department for providing necessary permission to locate the plants in Agasthyamalai forest range.