PHYTOCHEMICAL SCREENING AND EVALUATION OF ANALGESIC AND THROMBOLYTIC ACTIVITY OF THE CRUDE METHANOLIC EXTRACT OF CALAMUS ROTANG L. LEAVES (ARECACEAE)

PHYTOCHEMICAL SCREENING AND EVALUATION OF ANALGESIC AND THROMBOLYTIC ACTIVITY OF THE CRUDE METHANOLIC EXTRACT OF CALAMUS ROTANG L. LEAVES (ARECACEAE)

ABSTRACT: Medicinal plants abound with many phytochemicals that are effective in representing lots of pharmacological activities. The current study aimed at investigating the phytochemical and pharmaco-logical activity of crude methanol extract of Calamus rotang L. (CRME) leaves. The analgesic activity and thrombolytic activity were examined by the acetic acid-induced writhing method, while the clot lysis effect was evaluated by an in-vitro thrombolytic method. From this study, it is stated that the extract (400, 200 mg/kg) reduced abdominal writhing by 31.06% and 44.33% for 200 mg/kg and 400 mg/kg respectively while the standard showed 58.57% of inhibition and increased the pain reaction time in mice when compared to that of the negative control group in tail-immersion test. The extract presented 16.2 ± 1.75% of human blood clot lysis in the thrombolytic experiment. The presence of steroids, saponins, glycosides, cardenolides, flavonoids, carbohydrates, and reducing sugars might have an influence on the pharmacological activity of CRME.

INTRODUCTION: Traditional medicines are very popular with a view to having an intense historical and cultural value in many developing countries 1. It has also gained popularity for its tremendous medicinal properties in the treatment and prevention of different types of diseases 2. A report published by WHO states that about 80% of the world’s population relies mainly on herbal medicine for their primary health care needs, and most of the traditional therapy uses the plant extracts and their active constituents due to their safety and effectiveness 3, 4.

The synthetic drugs that are used in the treatment of analgesia and thrombosis have different types of adverse effects, and some are costly 5. The plant-based drug discovery can avert this in an effective and safe manner. Calamus rotang L. (commonly known as bet) is a common growing shrub and medicinal plant in Bangladesh, belonging to the family Arecaceae 6. It is an evergreen climber and a native plant of south-west Asia 6.

This medicinal plant possesses several medicinal uses because of the presence of secondary metabolites like saponin in the stem, alkaloid in the leaves, and flavonoid in the root 7. It has shown several medicinal properties, including anti-diarrheal, anti-inflammatory, antipyretic, anti-diabetic, astringent, antibilious, spasmolytic, wood-vermifuge effects 8. Its tender shoots are utilized as a febrifuge 9, antihelminthic by tribal people 6. Its leaf sap is used for eye problem 6 and in the treatment of biliousness and diseases of the blood 8. The stem bark is used in the treatment of chronic fevers and as an antidote to snake venom 10.

Considering the traditional use of Calamus rotang, here we designed the study to assess the analgesic activity by an acetic acid-induced writhing method and tail-immersion method, thrombolytic activity by clot lysis method and evaluate the presence of phytochemical constituents.

Collection and Identification of Plant Materials: The matured plant leaves were collected from Chattogram division of Bangladesh. Then, it was distinguished as Calamus rotang by taxonomist Dr. Shaikh Bokhtear Uddin, Professor, Department of Botany, the University of Chittagong under the identification no ra203426.

Extract Preparation: Plant leaves were washed properly, and semi shed sun-dried for seven days. After drying in an oven, the plant materials were ground using a mechanical grinder. 330 gm of dried powder of C. rotang leaves were soaked in 2000 ml of methanol and kept at room temperature with occasional shaking. After 13 days, the solution was filtered through filter cloth followed by Whatman no. 1 filter paper, and the filtrate thus obtained was concentrated by using a rotary evaporator. The weight of extract yielded was 23.81 gm. The percentage yield of the extract was calculated using the following equation12:

Experimental Animals: Male Swiss Albino mice of 25-35 gm were used for an in-vivo test, which was bought from the Bangladesh Council of Scientific and Industrial Research (BCSIR), Chattogram, Bangladesh. These were housed properly and served an adequate diet with drinking water ad libitum throughout the study.

Phytochemical Screening: Phytochemical screening of CRME was performed by using standard procedures 13, 14, 15. The color intensity or the precipitate formation was used as analytical responses to these qualitative tests.

Acetic Acid-Induced Writhing Method: The peripheral analgesic study was conducted by using an acetic acid-induced writhing method following the previously described method 16 with slight modifications. Of four groups of mice (five mice per group), each were administered 1% Tween-80 solution 10 ml/kg (negative control), Diclofenac sodium 10 mg/kg (positive control) and CRME 200 mg/kg, CRME 400 mg/kg, respectively all by oral route, 30 min prior to IP administration of 0.7% glacial acetic acid (GAA) at 10 ml/kg. After 5 min of IP administration of 0.7% GAA, the abdominal writhing of each mouse was carefully counted for 20 min. The percentage inhibition of writhing was calculated to investigate the degree of analgesia using the formula: 17

About 3 cm of the terminal point of the tail of mice were immersed in warm water by using a water bath at a temperature of 50 °C. Then the tail-flick time of each mice from the water was counted for 30 min prior to and 30, 60, 90 and 120 min after treatment. The cut off period was 15 sec to avoid the tail damage.

The percentage of the Maximal Possible Effect (%MPE) of CRME was calculated using the following equation: 19

The percentage of time elongation (%TE) produced by CRME with comparison to positive control was calculated from the following equation20:

In-vitro Thrombolytic Activity Assay: The thrombolytic study was carried out according to the method reported earlier 21. The test solution was prepared by mixing 100 mg of CRME with 10 ml of distilled water (DW) and was shaken vigorously on a vortex mixer. After overnight, it was filtered by using a 0.22-micron syringe filter. Of twelve pre-weighed Eppendorf tubes, each containing 500 µL of blood samples were incubated at 37 °C for 45 min. After clot formation, the serum was completely removed from each Eppendorf tube, and the clot weight was determined (Clot weight= Weight of clot filled Eppendorf – Weight of empty Eppendorf). Then 100 μl of commercially available lyophilized Streptokinase (SK) (15, 00,000 I.U.) (positive control), 100μl of DW (negative control) and 100 μl of CRME were separately added to the Eppendorf tubes and again incubated at 37 °C for 90 min.

After incubation, the serum was completely removed, and the percentage of clot lysis was determined as followings:

Phytochemical Screening: The result of the phytochemical analysis was presented in Table 1.

Acetic Acid-Induced Writhing Method: The peripheral analgesic effect of CRME in the acetic acid-induced writhing method was presented in Table 2 and Fig. 1. 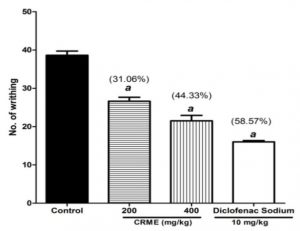 Tail-Immersion Test: The result of the central analgesic activity of CRME obtained from the tail-immersion test was demonstrated in Table 3, Table 4 and Fig. 2. 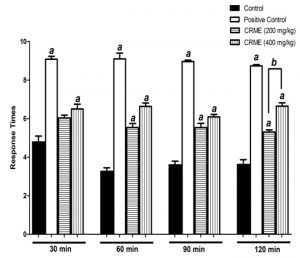 TABLE 5: SCREENING OF THROMBOLYTIC ACTIVITY (IN TERM OF % OF CLOT LYSIS) OF CALAMUS ROTANG

In-vitro Thrombolytic Activity Assay: As a part of discovering natural medicine as the cardioactive drug, the antithrombotic effect of CRME was evaluated and the result was represented in Table 5 and Fig. 3. 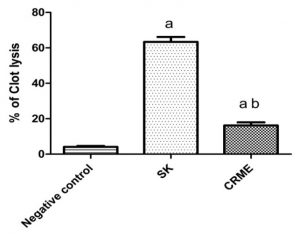 DISCUSSION: Plants combine different end products of metabolites and toxic substances in the form of secondary metabolites. These are stored and used for protection from insects, herbivorous animals, pathogenic organisms, and source of different essential elements. The secondary metabolites were further exploited as antibiotics, anthelminthic agents, anticoagulants, antitumor substances and carcinogens, cardio-excitatory substances, growth substances and hormones, haemagglutinins and lectin-type agglutinins, hypotensives, insecticides, toxins and vitamins. The current study revealed the presence of steroids, saponins, glycosides, cardiac glycosides, flavor-noids and phlorotannins in CRME. Many of the aforementioned compounds can be directly and synthetically modified and used in medicine. The acetic acid- induced writhing model was applied to assess the peripheral analgesic activity of CRME 22, which used IP 0.7% of the GAA to stimulate peripheral pain receptors and caused to release free arachidonic acid (AA) from the tissue phospholipid 23. It resulted in the abdominal writhing of a mouse.

In this method, the heat stimulated non-myelinated C fibers of the mouse’s tail, caused the release of excessive substance P 20. The pain receptors were activated when the thermal stimulus reached beyond the threshold of pain receptors, and they were sensitized by the sensory nerves 25. In addition, the thermal stimulus was sensitive to opioid µ-receptor 26. It was noticed that CRME 200 mg/kg, CRME 400 mg/kg and Morphine sulfate showed more post drug latency, the %MPE and %TE than that of the negative control at a different time interval which indicated the possible significant (p<0.001) central analgesic effect of CRME in a dose-dependent manner.

CRME was observed to manifest moderate central analgesic activity in comparison to morphine sulfate whose effect was reduced and increased gradually with the time span at 200 mg/kg and 400 mg/kg, respectively. Commercially available thrombolytic drugs like SK activates other plasminogen to plasmin by complexing with circulatory plasminogen, which in turn dissolves fibrinogen and fibrin, the insoluble matrix of the clot that results in lysis of blood clot 27.

In the current study of evaluation of the thrombolytic activity of CRME, with the comparison of the percentage of clot lysis of positive control (SK) to the negative control (DW), it was evident that the dissolution of the clot was negligible upon addition of DW. Significant (p<0.001) mild thrombolytic activity was exhibited by CRME (16.2 ± 1.75%) when compared to SK (63.3 ± 2.81%) and DW (4.08 ± 0.56%). Several types of researches have revealed that alkaloid 21, flavonoids 28 and cardiac glycoside 29 were effective against thrombosis and coronary artery diseases, the presence of which might have contributed to the slight thrombolytic activity of CRME.

CONCLUSION: Natural product development for the treatment of different diseases is of utmost importance. CRME possessed moderate central and peripheral analgesic anxiolytic activity in a dose-dependent manner. It also exhibited mild thrombolytic and anthelmintic effects at higher concentrations. Further researches regarding the isolation of its active compounds must be considered to evaluate its activities in various medical treatments.

ETHICS APPROVAL AND CONSENT TO PARTICIPATE: All authors hereby declare that “Principles of laboratory animal care” (NIH publication No. 85-23, revised 1985) were followed, as well as specific national laws where applicable. All experiments have been examined and approved by the ethical committee of the University of Chittagong, Bangladesh, under the approval no- cc98056.