ABSTRACT: Plumeria alba Linn. belonging to the family Apocynaceae (Dogbane family) is the flowering plant. P. alba is used as a purgative, rubefacient in rheumatism, asthma, piles, gonorrhea, blood disorders and tumors, mentioned in the traditional system of medicine. The present study was carried out to establish the pharmacognostic studies, physicochemical parameters along with a preliminary phytochemical screening of various extracts of P. alba leaves. The methanolic extract of the leaves of the plant was screened for anti-diarrheal potentiality. The macroscopical and microscopical characteristics of powdered drug were studied. The transverse section of leaf indicated the arrangement of various cells in epidermal, lamina, and midrib regions. The preliminary phytochemical screening of various extracts revealed the presence of phytoconstituents, including alkaloid, glycosides, phenolic and tannins, flavonoids, and sterols. The physicochemical parameters such as total ash and acid insoluble ash (9.5 and 7.3% w/w respectively), loss on drying (0.5% w/w), and extractive values water-soluble and alcohol-soluble (10.0 and 4.2% respectively) of powder drug were studied. These studies will be helpful to establish standards for quality, purity, and sample identification of P. alba Linn. The anti-diarrheal activity of methanolic extract of leaves of P. alba showed the percentage inhibition of diarrheal feaces in castor oil-induced diarrhea is significant as compared to the standard drug loperamide (5mg/kg).

INTRODUCTION: The utilization of herbs and herbal extracts for their rejuvenating powers can be traced to the earliest myths, traditions, and indictments used to codify those plants that can treat diseases 1. Plumeria is a genus of flowering plants of the dogbane (family: Apocynaceae), native to New Zealand, Central America, Mexico, the Caribbean, and Brazil 2.

The different species of Plumeria are mainly used as a garden and park plant, as well as also used in temples and cemeteries in many parts of India 3. 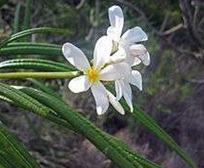 Plumeria alba Linn. also known as Frangipani with an impressive range of medicinal and biological properties, has been used in the folk medicine systems of several civilizations like for the treatment of, cardiotonic, purgative, diuretic, in rheumatism, asthma, piles, gonorrhea, blood disorders and tumors and hypotensive 4, 5, 6, 7. The milky sap of the stem and leaf is applied to skin diseases to control herpes, scabies, and ulcers 8, 9. The bark is bruised and applied as the plaster over hard tumors 10.

For standardization and quality assurance purposes, the following three attributes must be verified: authenticity, purity, and assays. Hence, in this work, we make an attempt for the standardization of Plumeria alba Linn. by carrying out its pharmacognostical studies, physicochemical parameters, and preliminary phytochemical screening of leaves. To analyze the traditional uses, the anti-diarrheal property was screened for the methanolic extract of P. alba leaves.

Plant Collection and Authentication: The flower and leaves of the Plumeria alba plant were collected in the month of March 2010 from Greater Noida, Uttar Pradesh. The herbarium of the plant specimen Plumeria alba L. (White Champa) was identified and authenticated by Dr. Anjula Pandey, Scientist (Principal), National Bureau of Plant Genetic Resources, Indian Council of Agricultural Research, New Delhi with voucher number NHCP/NBPGR/2010-19/. The herbarium of the plant specimen is preserved at the Pharmacy Institute of NIET, Greater Noida, Uttar Pradesh.

Extraction: The leaves of Plumeria alba were collected, dried in the shade and powdered. Dried powder was subjected to Soxhlet extraction using methanol at 40- 60 ºC. The liquor was concentrated to recover methanol, and the extracts were kept in a desiccator for drying. The percentage yields were calculated as 17.32%. The dried methanolic  extracts of the leaf of P. alba (MELPA) were stored in a tightly closed amber color glass bottle.

Chemical and Reagent: All the chemicals and solvents used for the study were of analytical grade and all methods were taken from official methods.

Macroscopical Characters: The fresh leaf of P. alba was studied for their macroscopical characters such as color, odor, taste, shape, size, and margin.

Microscopical Characters: Microscopical study of P. alba leaf in entire form for histological evaluation was carried out. Thin transverse sections soaked in water were cut and stained with phloroglucinol and hydrochloric acid and observed under the compound microscope.

Physicochemical Parameters: The physico-chemical parameters such as the percentage of total ash, acid-insoluble ash, loss on drying, and extractive values were determined according to official methods for quality control of medicinal plant 11, 12, 13, 14, 15.

Experimental Animals: Animal experiments were approved by Institutional Animal Ethics Committee (IAEC) of Noida Institute of Engineering & Technology (Pharmacy Institute), Greater Noida (Reference no.1121acCPCSEA7). Adult Wistar rats (150-250g) of either sex were used for the study. The animals were maintained at the Animal House of the NIET Pharmacy Institute under standard hygienic conditions. They were fed with a standard diet and had free access to water ad libitum. The animals were maintained under standard conditions of humidity, temperature, and 12h light/12h darkness cycle.

Anti-diarrheal Activity: Anti-diarrheal activity of methanolic extract of leaves of Plumeria alba (MELPA) was assessed by castor oil-induced diarrheal method. The Wister rats of either sex (weight 150-250g) were divided randomly into groups with five animals in each group (n=5) and fasted for 18 h. Normal saline was administered to the control group, and the different doses of MELPA were administered in treated groups. Loperamide was used as a standard drug. One hour later, all the animals were administered with 1 ml/rat of castor oil orally by gavage. The severity of diarrhea was assessed at 1, 2, 4 h and continued for 6 h. The total number of feces (both diarrheal and non-diarrheal) expelled was compared with the control group. The anti-diarrheal effect of the drug was calculated by considering the total number of diarrheal feces of the control group as 100% 16, 17, 18.

Macroscopical Studies: The macroscopical evaluation of Plumeria alba leaves showed dark green color with the size of 12-14 cm length and 4-6 cm width, lanceolate shape with entire margin, reticulate venetion, acute apex, and asymmetrical base. The leaf was having slight odor and sweet-sour taste.

Microscopical Characters: The transverse section of the leaf showed that the lamina is trichomatous on the outer side and smooth and glabrous on the inner side. The major lateral veins project prominently into the conical outer part. The lateral veins and veinlets have a small cluster of xylem elements and a thin arc of phloem. The vascular bundles are subtended by a thick mass of parenchyma. The cells are mostly rectangular. The outer epidermis is thin, and the cells are narrow and cylindrical Fig. 2.

FIG. 2: TRANSVERSE SECTION OF LEAF OF PLUMERIA ALBA (A & B)

The leaf has very thick midrib and thin lamina arising from the adaxial - lateral portion of the midrib. The outer zone of ground tissue consists of smaller collenchyma cells and the remaining portion being parenchymatous cells. Narrow thick-walled, circular, or lobed laticifers are seen randomly dispersed in the ground tissue. The vascular system consists of short, radial fibers of 3-5 angular xylem elements and a thin layer of phloem along the outer metaxylem side Fig. 2. The epidermal cells are rectangular to polyhedral in shape. The cells have straight or slightly wavy walls. The walls are moderately thick.

Physico-chemical Parameters: The various parameters such as total ash, acid insoluble ash, water-soluble ash, loss on drying, and extractive values were established and shown in Table 1.

Preliminary Phytochemical Screening: The powdered leaf was subjected to various solvents like petroleum ether, chloroform, acetic acid, acetone, methanol, benzene, and water. The extracts were subjected for investigation of various phytoconstituents. It revealed the presence of different phytoconstituents, like alkaloid, glycosides, phenolic and tannins, flavonoids, and sterols, as shown in Table 2.

Anti-diarrheal Activity: After administration of castor oil, diarrhea was clinically apparent in all the animals of the control group. The standard drug and various doses of MELPA reduced the number of diarrheal feaces.

The one way ANOVA and Dunnet’s Multiple comparison test was used for Statistical analysis. Values are expressed as mean ± S.E.M. (N=6), *P<0.05, **P<0.01, when compared with the control group.

As shown in Table 3, the reduction in the number of defecations was also achieved with MELPA. The MELPA doses of 100 and 200 mg/kg significantly inhibited the defecation of 45% and 58%, respectively, which was comparable with the standard drug Loperamide with percent inhibition of 66%.

CONCLUSION: The Pharmacognostical and phytochemical standardization on P. alba gives the idea about identification, standardization, and monograph of the plant.

Diarrhea is a major cause of deaths among children below 5 years in developing countries 19. As natural agents are devoid of side effects or have very less side effects, the entire pharmaceutical industry is looking for new chemical entities from a natural source. The methanolic extract of P. alba leaves revealed promising results as an antidiarrheal agent when compared to the standard drug loperamide. The MELPA showed a significant decrease in a number of wet feces produced upon administration of castor oil as compare to the control group.