ABSTRACT: The phytochemicals of various parts of the plants mainly the secondary metabolites are well known for its high potential therapeutic values such as antifungal, antibacterial, anti-inflammatory, anticancer, antiplasmodial, antioxidant, insecticidal etc. In the present investigation an attempt was made to analyze the various phytochemicals present in Artemisia nilagirica (Clarke) Pamp which is wide spread and commonly grown for its religious importance and fragrance through GC-MS. Methanolic leaf extract of the A.nilagirica (Clarke) Pamp revealed eight different compounds and the structures were predicted and recorded. The phytoconstituents of the target extract revealed high medicinal values in the pharmaceuticals industries. These compounds were separated by column chromatography for further authentication of the therapeutic values.

INTRODUCTION: The knowledge and use of phytochemicals as medicine has begin from the very ancient era towards Ayurveda, siddha and Unani 1. The significant increase of plant derived materials attributed development of new drugs and re-establishment of old ones according to the demands of mankind 2, 3, various bioactive compounds are said to be efficient antibacterial, antiviral, fungicide, immunosuppressive, cytotoxic, algicidal etc 4, 5, 6. Since 1926, it has been proved that the bioactive compounds are characterized to inhibit microorganisms and also witnessed to have a significant increase in the prevalence of resistance to bacteria, fungi, viruses, protozoa etc 7, 8.

The oil extracted from Coriandrum sativum proved to be efficient hypoglycemia and anti inflammatory 9. Different climatic conditions and soil type results in variation of components in essential oils. Essentials oil of mugwort is very efficient in treating such disorders. It also serves as siuretic by urination both in frequency and quantity 10. The phytochemical screening of Hamiltonia suaveolens (RoxB) revealed thirty different compounds by GC-MS analysis with ether, chloroform and ethyl acetate solvents 11.

In the present investigation, an attempt has been made to elucidate the bioactive compounds from the leaf extract of Artemisia nilagirica (Clarke) Pamp.

Plant material: The identified plant Artemisia nilagirica (Clarke) pamp was collected from Theni district, Tamilnadu and the plant was authenticated at plant Anatomy Research Centre, Chennai and the voucher specimen (No.PARC/2014/2208) has also been deposited in the herbarium of the institute for further reference. The plant parts were segregated and washed thoroughly for further investigation.

Sample Collection: The leaves of Artemisia nilagirica (Clarke) Pamp were collected and washed thoroughly in running tap water to remove soil particles and other debris .The leaves were shade dried separately and ground to fine powder using electric blender. The powdered materials were stored in air tight polythene container for further investigation.

Preparation of crude extracts: The powdered leaf material was immersed in methanol and the extract was separated and filtered by whatman No.1 paper and dried by rotary evaporator.

Gas Chromatography- Mass Spectrometry Analysis: GC-MS technique was performed using GC SHIMADZU QP2010 system and gas chromatograph interfaced to a Mass Spectrometer (GC-MS) equipped with Elite-1 fused silica capillary column (Length : 30.0 m, Diameter : 0.25 mm, Film thickness : 0.25 is Composed of 100% Dimethyl poly siloxane). An electron ionization energy system with ionization energy of 70eV was used. Helium gas (99.999%) was used as the carrier gas at a constant flow rate of 1.51ml/min and an injection volume of 2ìl was employed (split ratio: 20). Injector temperature 200°C; Ion-source temperature 200°C. The oven temperature was programmed from 70°C (isothermal for 2 min.), with an increase of 300°C for 10 min. Mass spectra were taken at 70eV; at a scan interval of 0.5 seconds with scan range of 40 – 1000 m/z. Total GC running time was 35 min. The relative percentage amount of each component was calculated by comparing its average peak area to the total areas.

Software adopted to handle mass spectra and chromatograms was GC MS solution ver. 2.53. Interpretation of mass spectrum GC-MS was conducted using the database of National Institute Standard and Technique (NIST08s), WILEY8 and FAME having more patterns. The spectrum of the unknown component was compared with the spectrum of the known components stored in the NIST08s, WILEY8 and FAME library, for Molecular weight, Molecular formula and Structure of the components.

RESULTS AND DISCUSSION: The results of Gas Chromatography- Mass Spectrometry (GC-MS) analysis leads to the identification of number of compounds from fractions of the methanol extract of leaves. These Compounds were identified through Gas Chromatography- Mass Spectrometry (GC-MS) under standard procedure. The results of GC-MS analysis revealed the various parameters such as Retention Time (RT), Molecular Formula (MF), Molecular Weight (MW), concentration in terms of percentage and peak area .The various Components present in the leaf of Artemisia nilagirica (Clarke) Pamp that were detected by the GC-MS are shown in (Table 1 and Fig.1. 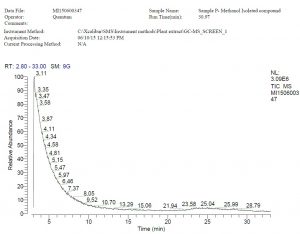 The GC-MS analysis showed that the major compounds are 15.19% of Ergosta-5, 7, 22-trien- 3-o1, acetate, (3a, 22E) and the retention time is 11.24 are reported to the highest composition of the compounds followed by 14.76% of Bufa-20, 22- dienolide, 3, 14- dihydroxy- (3a, 5a) and the molecular weight is 386. Prednisone compounds about 10.65% and the retention time is 8.06 having minimum contribution from the rest of the compounds. The antioxidant properties of phenolic acids and the flavonoids are due to their redox properties, ability to chelate metals and quenching of singlet oxygen 14. It is concluded that the maximum extract of phytochemicals was observed in methanol extract of leaves which reveals that Artemisia nilagirica is highly valuable in medicinal usage for the treatment of various human ailments.