ABSTRACT: The aim of this research was to perform phytochemical screening and evaluation of the pharmacological activities of Buchanania lanzan Spreng. leaves. Preliminary phytochemical screening revealed the presence of phytoconstituents like steroids, tannins, saponins, carbohydrates, alkaloids, and flavonoids. Three leaf extracts were prepared by using solvents e.g. chloroform, ethyl acetate, and ethanol. The antibacterial activity was evaluated by using the paper disc method against Escherichia coli, Pseudomonas aeruginosa and Staphylococcus aureus. The chloroform extract was found to be more effective against Pseudomonas aeruginosa with a zone of inhibition 20 mm as compared to the standard anti-biotic ampicillin with a zone of inhibition 20 mm. Antifungal activities were evaluated by well diffusion assay against Candida albicans, Aspergillus flavus, Aspergillus niger. The chloroform extract was found be more effective against Aspergillus flavus and Candida albicans with a zone of inhibition 22 mm and 20 mm respectively as compared to the standard antifungal ketoconazole with a zone of inhibition 22 mm. Antifungal activity against Aspergillus niger with zone of inhibition 22 mm was comparable to standard Ketoconazole with zone of inhibition 24 mm. Anthelmintic activity was performed on Pheritima posthuma using Albendazole as standard and ethanolic extract was found to be more effective. Hepatoprotective activity performed on Wistar albino rats revealed that ethyl acetate extract was more promising using LIV 52 as standard. Therefore, it can be concluded that the Buchanania Lanzan leaves specific extracts possess antimicrobial, anthelmintic and hepatoprotective activity which can be further explored for the development of formulation and their structural elucidation.

INTRODUCTION: Buchanania lanzan Spreng. a member of family Anacardiaceae is a commercially useful tree, first described by Francis Hamilton in 1798 Fig. 1. It is commonly known as char, achar or chironji. The tree is native in the tropical deciduous forests of Northern, Western and Central India.

It is also found in other tropical Asian countries, Australia and the Pacific islands 1. The tree grows well on yellow sandy-loamy soil. The bark of Buchanania lanzan Spreng. is rough, with dark grey or black color. Leaves are broadly oblong, have rounded base with a blunt tip and straight parallel veins. The flowering period is between January to March. Flowers are small, greenish-white. 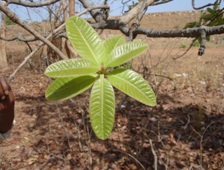 Materials: The leaves of Buchanania lanzan were collected from a local area of Manasayurved, Nagpur, Maharashtra, India, in September 2015. A solvent such as petroleum ether, chloroform, ethyl acetate, ethanol was purchased from Loba Chemie Pvt. Ltd. Mumbai.

Authentication of Buchanania lanzan Spreng. Plant: The plant Buchanania lanzan was authenticated by Dr. S. N. Malode, Head of Department of Botany, Government Vidarbha Institute of Science and Humanities, Amravati. The plant has Reference no. GVISH/BOT/Report/ 07/2015. A sample voucher specimen of the plant was deposited for future reference.

Extraction: The leaves of Buchanania lanzan was collected and dried in the shade and then pulverized in a grinder. The material was then passed through #120 mesh to obtain uniform size powder. The powdered plant material was successively extracted separately with solvents of increasing polarity like petroleum ether, chloroform, ethyl acetate and ethanol by Soxhlet extractor.

Before extraction with each solvent, the powdered material, as well as each extract (residue), was air-dried below 50 °C, and The completion of extraction was indicated by taking a sample out of siphon tube on TLC plate and placing it in iodine chamber. All the extracts were concentrated under the vacuum, and dried along solvent was distilled off.

Phytochemical Screening: The plant may be considered as the biosynthetic laboratory for a multitude of components like alkaloids, glycoside, volatile oils, tannins, and flavonoids. They are termed as secondary metabolites, which are mainly responsible for therapeutic effects. Various extracts of Buchanania lanzan were subjected to phytochemical screening Table 1 for identification of different constituents and plant metabolites present in the extract 1.

Antibacterial Activity: 15-17 Anti-bacterial activity of Buchanania lanzan was evaluated on Escherichia coli, Pseudomonas aeruginosa and Staphylococcus aureus using paper disc method. Extracts were used at a concentration of 1 mg/ml along with standard antibiotic Ampicillin (1 mg/ml) in dimethyl sulfoxide (DMSO) solution. Test organisms were maintained at nutrient medium (Sabouraud dextrose agar medium) which was sterilized by autoclaving at 151 b/sq. inch pressure for 30 min. All extracts were dissolved in DMSO separately to get 10 mg/ml solution. The nutrient agar plates were prepared by pouring 20 ml of molten media into sterile petriplates under aseptic conditions.

The plates were allowed to solidify for 5 min and 0.5 ml of test culture was inoculated and uniformly spread over the agar surface with the help of a sterile L - shaped bent glass rod. After inoculation, wells were scooped out with 6 mm sterile cork borer and the lids of the dishes were replaced. To each well, different extract solution was added separately and controlled were the same maintained. The treated plats were kept for incubation at 37 °C for 24 h. At the end of incubation, inhibition zones formed around the discs were measured and diameter was calculated in millimeter.

Anti-fungal Activity: 18 Anti-fungal activities of Buchanania lanzan leaves extracts was evaluated on Aspergillus niger, Aspergillus flavus and Candida albicans with well diffusion method. Extracts were used at a concentration of 1 mg/ml along with standard antifungal Ketoconazole. Test organisms were maintained at nutrient medium (Sabouraud dextrose agar medium) which was sterilized by autoclaving at 151 b/sq. inch pressure for 30 min. Ketoconazole (1 mg/ml) in DMSO solution. All extracts were dissolved in dimethyl sulfoxide (DMSO) separately to get 10 mg/ml solution. 1 ml of culture mixed thoroughly. The plates were allowed to solidify and dry for 15 min before use in the test. Wells were then created and a pipette was used to place 50 ml of diluted extract into each well. The plates were incubated at 37 °C and 28 °C for 3-5 days after which they were examined for inhibition zones. The calibrated plastic scale was used to measure the inhibition zones. The test experiment was repeated two times to ensure reliability.

Anthelmintic Activity: 19, 20 The anthelmintic activity was evaluated on Indian earthworm Pheritima posthuma. The extracts were prepared at a concentration of 10 mg/ml, along with albendazole as a standard anthelmintic. Albendazole (10 mg/ml) prepared in distilled water. The various concentrations (25, 50 mg/ml) of each extract were prepared in distilled water. Five groups each containing four earthworms of approximately equal size was released into 10 ml of the desired formulation. Each group was treated with one of the following, vehicles (5% DMF in normal saline), albendazole, alcoholic extract, chloroform extract, ethyl acetate extract of leaves of Buchanania lanzan (25, 50 mg/ml each) in normal saline containing 5% DMF. The living and viable worms were kept under close observation and the time taken to complete paralysis and death were recorded. The motionless worms were transferred to warm water at 40 °C to confirm that they are dead.

Hepatoprotective Activity: 21-23 Hepatoprotective activity was carried out by an acute toxicity study. Acute toxicity study of successive extracts of chloroform, ethanol and ethyl acetate was performed as per OECD guidelines 423 using Wistar albino rats. The animals were randomly selected and marked to permit individual identification. They were kept in the cage five days before dosing to allow for acclimatization to laboratory conditions. The extract of Buchanania lanzan had been given in various doses (100 - 500 mg/kg) by the oral route. After administration of the extract, the animals were observed individually after at least once during the first 30 min, periodically during the first 24 h, with special attention giving during first 4 h, and duly thereafter, for a total 14 days. Data for mortality at different dose levels were recorded.

*R- Resistant (no zone of inhibition)

*R- Resistant (no zone of inhibition)

Student’s t-test was performed. Each value represents the mean ± S.E.M. of 5 rats in each group. P values :< 0.05 as compared with group II (CCl4 treated group) 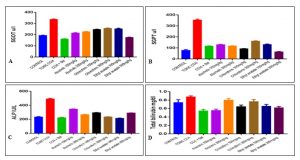 Anthelmintic Activity: Anthelmintic activity Fig. 5 showed that alcoholic extract was more effective as it takes less time for paralysis and death of earthworms in Table 5.

TABLE 5: EFFECT OF B. LANZAN EXTRACT OF VARIOUS CONCENTRATIONS ON EARTHWORM

DISCUSSION: Present research work aimed to evaluate potential hepatoprotective, antibacterial, antifungal and anthelmintic activity of extracts of Buchanania lanzan leaves. As per our knowledge, the plant has not been explored for its hepatoprotective activity to date. The literature survey reveals that the Buchanania lanzan contains tannins, saponins, flavonoids, carbohydrates which are known to possess anti-oxidant, antimicrobial activity. The anti-bacterial study was performed using disc diffusion method. The zone of inhibition against various bacterial strains is shown in Table 2. The results reveal that chloroform extract is more effective against Pseudomonas aeruginosa with maximum zone of inhibition 20 mm. Alcoholic extract was resistant to Staphylococcus aureus while ethyl acetate extract was resistant to Escherichia coli and Pseudomonas aeruginosa. The results of anti-fungal activity are shown in Table 3. It reveals that chloroform extract and alcoholic extract had antifungal activity against all fungal strains. However, ethyl acetate extract was found to be less active as anti-fungal. Assessment of hepatoprotective activity, the degree of hepatotoxicity developed was determined by withdrawing blood and evaluating different parameters on seventh day. The elevated level of SGOT, SGPT, ALP, and total bilirubin indicates the hepatotoxicity. According to observed biochemical parameters obtained Table 4, ethyl acetate extract showed a marked reduction in elevated enzyme level, and it shows activity like Liv52 standard drug Fig. 4. It can be concluded that ethyl acetate extract was effective in hepatotoxicity. The anthelmintic study was performed on Indian earthworm Pheritima posthuma using Albendazole as a standard drug. According to results showed in Table 5, the alcoholic extract showed more anthelmintic activity as compared to ethyl acetate and chloroform extracts.

ACKNOWLEDGEMENT: Authors are thankful to the Principal, Government College of Pharmacy, for providing the facilities for the successful completion of the work. We are also grateful to Dr. S. N. Malode, HOD, Department of Botany, VMV College Amravati for authenticating Buchanania lanzan plant, and to Priyadarshini J. L. College of Pharmacy, Nagpur for permission to carry out animal studies on Buchanania lanzan extracts.