ABSTRACT: Lantana camara Linn. is an important ethnomedicinal plant with several medicinal properties. It is widely used in the traditional medicinal system as carminative, anti-inflammatory, antipyretic and respiratory system infections. The present investigation was carried out to determine the qualitative analysis of phytochemical screening and the presence of bioactive compounds from the hexanolic extract of Lantana camara leaves using GC-MS. The GC-MS analysis of hexanolic extract reported the presence of cis-Caryophyllene, caryophyllene oxide, isophytol acetate, 13-docosenamide, (Z) - and Squalene as major compounds. The presence of terpenes in extract confirms its application as anti-cancer, antioxidant and anti-microbial agents along with traditional medicine application.

INTRODUCTION: Medicinal plants are a treasure house of many potential drugs. There has been an increase in awareness and interest in the importance of medicinal plants in recent years. Drugs obtained from the medicinal plants are easily available, cheaper, safe and having minimum side effects. According to WHO, 80% of the world’s population from developed countries depend on traditional medicines for primary health care 1. Medicinal plants contain bioactive compounds that participate in physiological action on the human body 2. Lantana camara Linn. is listed as one of the most important medicinal plants of the world 3. It is a significant weed with 650 varieties growing in 60 countries.

It is commonly known as wild or red sage and regarded both as a notorious weed and ornamental garden plant and it belongs to family Verbenaceae 4. In India, it was introduced at the National Botanical Gardens, Calcutta in 1807 as an ornamental plant 5. Lantana camara Linn. is an evergreen strong aromatic, hairy shrub. It grows to a height 1 to 3 meters and it can spread to 2.5 meters in width. The stems and branches are sometimes armed with prickles or spines. The leaves are arranged in opposite pairs, elliptic about 3 inches long and 1.5 inches wide with pointed tip and base rounded and toothed in the margins. 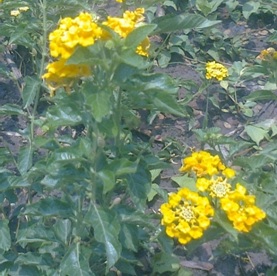 Collection of Plant Material and Powder Preparation: The fresh leaves of Lantana camara were collected from Bela Village, near Nagpur city. This city is located at the central part of India.

The sample of plant was identified by senior plant taxonomist, Dr. S. U. Borkar, Department of Botany, Govt. Institute of Science, Civil Lines, Nagpur (Maharashtra), India. The specimen was submitted to the herbarium of the department with authentication code, IoSc./Bot.Sci/09/1/2018-19/192. The collected plant is shown in Fig. 1. The plant leaves were washed thoroughly with clean water to remove dust and dirt and then air-dried under shade at room temperature for about 15 days. The dried leaves were ground to a fine powder using pestle and mortar and a domestic electric grinder. The material was stored in an airtight brown color glass bottle for further use.

Preparation of Extract: The coarsely powdered plant material of Lantana camara was extracted with n-hexane (≥99% pure, Merck) solvent by cold (maceration) method. In each batch, 25 grams of plant material were dissolved in 250 ml of n-hexane solvent in airtight stopper brown bottle. After every eight hours, the bottle was shaken for 1 hour using a shaking machine. The process was repeated for 3 days. The solution was then filtered through Whatman filter paper no. 1. The filtrate was evaporated using a rotary evaporator and further dried at room temperature. The obtained dried crude extract was collected in an airtight container and stored in a refrigerator at 4 °C for further analysis.

Preliminary Phytochemical Analysis: The crude extract was subjected to the qualitative chemical tests for the detection of various phytochemicals using standard procedures as described by Harborne, Trease, Evans and Sofowora 19, 20, 21. The observations for chemical tests are shown in Table 1. It is reported that the extract contains flavonoids, saponins, terpenoids, carbohydrates and phyto-sterols in major quantities.

Gas Chromatography-Mass Spectrometry (GC-MS) Analysis: The GC-MS analysis was carried out using Thermo scientific TSQ 8000  GC-MS system and Gas Chromatograph interfaced to a mass spectrometer (GC-MS) instrument employing the column TG5MS (30 m × 0.25 mm, 0.25 µm, composed of 100% dimethylpolysiloxane). For GC -MS detection, an electron ionization system with energy of 70 ev was used. Helium gas (99.99%) was used as the carrier gas at a constant flow rate of 1ml/min. The oven temperature was raised from 60 °C to 280 °C (raising at the rate of 10 °C/min). The total GC running time was about 31 min. The mass spectra were carried out coupled with Gas chromatography by maintaining 70 ev voltage and keeping the source temp of 230 °C.

The inlet line temperature was maintained at 280 °C and the mass scan rate was tuned to 50-700. The total MS running time was about 34 min.

Gas Chromatography-Mass Spectrometry (GC-MS): The obtained spectrum of GC-MS analysis of hexane extract of leaves of Lantana camara is shown in Fig. 2. The spectrum shows more than 19 prominent peaks having higher retention time. Interpretation of the mass spectrum of GC -MS was conducted using the database of the National Institute of Standard and Technology (NIST). The spectrum of the unknown components was compared with the spectrum of the known components stored in the NIST library. Retention time, molecular weight, molecular formula and percentage composition were used to identify the components. A list of identified compounds and their retention time along with molecular formula are listed in Table 2.

The results pertaining to GC-MS analysis led to the identification of a mixture of numerous compounds. The majority among them belong to terpenoids. Table 3 shows the identified phytochemicals using GC-MS and their known biological activities.

CONCLUSION: GC-MS analysis revealed the presence of many important terpenoids compounds in the hexanoic extract of leaf of Lantana camara. The major components of the extract are cis-caryophyllene, β-Caryophyllene epoxide, L-camphor, 13-docosenamide, (z) - and squalene.

In this investigation, cis-caryophyllene is uniquely identified as it is not reported by any literature. Also, the major compound belongs to terpenoids and hence it justifies the medicinal importance of Lantana camara leaves for the treatment of several ailments by traditional practitioners. Further, isolation of active phytoconstituents and subjecting it to biological activity from the plant will definitely give fruitful results.

It could be concluded that Lantana camara leaves is a rich source of important secondary metabolites like terpenes. It is a plant with phytopharmaceutical importance.