INTRODUCTION: Herbal medicines have been used for ancient time to present day for human diseases1. Medicinal plants are equipped from a diversity of plant materials as leaves, stems, roots, barks, inflorescence etc2. Medicinal plants contain biologically active principles with specific therapeutic effects. Asparagus racemosus L. that belongs to Asparagae is a small perennial climber found all over different parts of Tamil Nadu, India. This climber has been used as a source of medicine by human from Ancient time. A. racemosus is an important herbal climber and it is widely used as Rasayana in Ayurvedic systems of medicines3.

According to ancient classical Ayurvedic literature claimed several therapeutic attributes for the root of A. racemosus and has been specially recommended in cases of galactogogue4. The traditional knowledge to scientific evidence was found to be lacking due to the traditional information that was kept secret by the village vaidyas5.

Modern pharmaceutics also have been benefited from herbal plants. The specific healing effect of herbal plants contains several phytochemical constituents 6, 7. The major bioactive components in the roots are alkaloids, a diverse class of natural products.  A wide variety of secondary metabolites inclusive of alkaloids, steroids and flavonoids are responsible for therapeutic properties of plants8.  The therapeutic achievements of the herbal plants exclusive to particular plant species or groups are consistent with the concept that the combination of secondary products in a particular plant is taxonomically distinct9. Medicinal plants provide health care and disease free life. Biologically active principles contained in it are exploited in conventional medicine for various ailments10.  The spectrometry and chromatographic screening method could provide the needed preliminary observations to select crude plant extracts with potentially useful properties for further chemical and pharmacological investigation. The determination of phytochemical constituents is mostly performed by the moderately expensive and often laborious techniques such as gas (GC) and liquid chromatography (LC) combined with specific detection schemes11. In the past few years, GC-MS has become strongly established as a key technological metabolic profiling in both plant and non-plant species 7, 12. The crude extracts and medicines manufactured of the principles of biological active compounds even by pharmaceutical companies could be lead to large scale exposure of humans to natural products.

In regulate to encourage the use of medicinal plants, it should be thoroughly investigated with their composition, activity and thus validate their use13. To the best of our knowledge, there is no scientific evidence to justify the traditional use of A. racemosus root in the ailment of corn foot. The present investigation, of this work was to study the natural bioactive products and their phytochemical constituents, corn foot activities in organic solvent extracts prepared from the Asparagus racemosus.

The roots of Asparagus racemosus were collected from traditional healers in Elusempon, Villupuram District, Tamil Nadu, India during January - 2012.

In the laboratory, fresh root were cut into small piece and dried then powered with a mechanical grinder and stored in a jib lock cover. The dried powder (100g) was refluxed with methanol for seven days. Removal of whole dry plants was done by filtration through whatman No.1filter paper.  The extracts were placed in glass petridishes. The total filtrate was concentrated to dryness, in hot air oven at 32oC to render methanol solvent extract. The dried crude extract (blackish-green yield 5.5% w/w) was found which was then re-dissolved in methanol to obtain a solution containing 2.0mg/ml of extracts to be used for further assays.

Asparagus racemosus root extract was subjected to qualitative screening for the detection of phytochemical groups by standard method14.

The analysis of the root powder were performed using a Hewlett Packard 5890 II GC, equipped with a HP-5 MS capillary column (30mo.25, film thickness 0.251m) and a HP5972 mass selective detector. For GC-MS detection an electron ionization system with ionization energy of 70 eV was used. Helium was the carrier gas, at a flow rate of 1m/min. Injector and MS transfer line temperature were set at 220 and 290o C respectively.   The diluted samples (1/100 in acetone, v/v) of 1ul were injected manually and in the splitless mode. The components were identified based on the comparison of their relative retention time and mass spectra with those of standards, NBS75K library data of the GC-MS system and literature data. The results were also confirmed by the comparison of the compounds elution order with their relative retention indices on non-polar phases reported in the literature.

GC-MS Analysis of A. racemosusroot extract The results shows to GC-MS analysis lead to the identification of number of compounds from GC fractions of the methanolic extract of A. racemosus. They were identified through mass spectroscopy attached with GC. GC-MS analysis of methanolic extract of A. racemosus was put into a (Table 2). The results revealed the presence of 6 different phytocompounds viz., 2-Propanone, 1, 3-dihydroxy – (10.97%), 2-Fruancarboxy aldehyde, 5-(hydroxymethyl) - (76.60%), Hexadecanoic acid- (2.17%), n-Hexadecanoic acid- (4.49%), Ethanol, 2 (Octyloxy) - (3.91%), 1, 9-Nonanediol- (1.86%). The GC-MS spectrum confirmed six compounds from A. racemosusroot were identified by the presence of 6 components with the retention time 5.301, 8.719, 15.069, 17.129, 20.139, and 21.609 respectively. The details of the identified phytoconstituents and its therapeutic activity were given in the (Table 3). The retention time, compound name, molecular formula, molecular structure, extracted ions of the compounds were examined. GC-MS analysis of methanolic extract of A. racemosus was tabulated in (Table 4). Medicinal plants in all facts of life have served a essential starting material for drug design and development15. Antifungal and antibacterial substances found to saponine, flavonoids, glycosides and alkaloids etc are found to be distributed in plants, yet these compounds were not well established due to the lack of knowledge and techniques16. From this phytochemical constituent, saponins have been reported to exhibit haemolytic and foaming activity17.

TABLE 2. IDENTIFIED PHYTOCHEMICALS FROM THE METHANOL ROOT EXTRACT OF A. RACEMOSUS

TABLE 3.THERAPEUTIC ACTIVITY OF THE PHYTOCOMPOUNDS CONSTITUENTS IDENTIFIED FROM THE METHANOL ROOT EXTRACT OF A. RACEMOSUS ROOT BY GC-MS.

TABLE 4. THE EXTRACTED IONS WITH THEIR RELATIVE RETENTION TIMES DURING THE GC-MS ANALYSIS 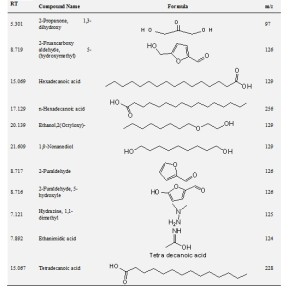 bioactive compounds including thiocynate, nitrate chloride and sulphates, beside other water soluble components which are naturally occurring in most plant materials, are known to be bacterial, pesticidal or fungicidal in nature thus conferring the antimicrobial property to plants19, 20. From this phyochemical constituent, saponins have been reported to exhibit hemolytic and foaming activity21.  To the best of my knowledge,compounds 1-6 were isolated from Asparagus racemosus. Generally, hereby plants are essential plant material having a wide range of local healing applications, the leaves, roots, barks and seeds are found to be antipyretic, laxative, analgesic, antioxidant, antifungal, antibacterial and non inflammatory18. Active phytochemical investigation revealed that the extracts contained a variety of phytoconstituents. Saponins, tannins, alkaloids and, flavonoids are present in the root extracts. The