ABSTRACT: Syzygium dhaneshiana is a new plant species of Syzygium is described from the Southern Western Ghats, Kerala, India. The medicinal values of the plant is so far unexplored, hence the study forms a basis for the bioactive components present in the plant. The aim of this study is to screen the phytochemicals present in the leaf and bark of the plant and the analysis of bioactive components present in it. The leaves and bark were successively extracted using petroleum ether, chloroform, ethanol and water based on the increasing order of polarity. The result reveals the presence of Carbohydrates, protein, amino acid, alkaloids and phenols in all the extracts. Saponin, fixed oils and fats were present in the leaf extracts. The GCMS analysis reports shows the presence of 17 Compounds in the leaf ethanolic and 19 in leaf chloroform extract of Syzygium dhaneshiana by comparing their retention time and their mass spectra. The bark ethanolic and chloroform comprises of 14 &16 Compounds respectively. Among the identified compounds major bioactive compounds are 2-Fluoroformyl-3,3,4,4-tetrafluoro-1,2-oxazetidine, 2,4, di tert-butylphenol, Cetene, E- 15. Heptadecenal, Neophytadiene, phytol and Nonacos-1-ene. The presence of bioactive compounds confirms that Syzygium dhaneshiana is a medicinal source and it may proceed to discover a novel drug.

INTRODUCTION: India is known for its wealth of medicinal plants which are found in its diverse climatic and physiographic conditions. Medicinal plants are widely used for the management of different disease conditions and to play a beneficial role in human health 1. More over traditional medicine is still predominant means of healthcare in developing countries where 80% of the total population depends on the medicinal plants for their well-being 2.

Medicinal plants are valuable natural resources and regarded as potentially safe drugs to play an important role in the modern medicine 3. Therefore, the increased use of herbal remedies which contains complex mixtures of natural products need intensified scientific studies.

Syzygium dhaneshiana is a new plant species is described from the Southern Western Ghats of Kerala, India. 4 the plant is similar to Syzygium gardneri Thw. but it differs by several charactors as that of Syzygium gardneri. The plant is distributed in the Nedumpoyil Ghat area in Kannur district and Chanthanathodu area of forest range in Western Ghats. The ethno botanical reports reveals that the bark of the plant have antimicrobial activity and the plant has antipyretic property also. The fruit of the plant is edible. Hence the plant is obligatory to screen the secondary metabolites and to screen the bioactive components by GC-MS method.

Collection and identification of plant material: Different parts of Syzygium dhaneshiana were collected during the month of June 2014 from Nedumpoyil Ghats in Kannur district of Kerala, India. The plant was identified and confirmed from Dr. Ratheesh Narayanan, Assistant professor, Payyannur College, Kannur, Kerala. The fresh materials were washed under running tap water to remove the surface pollutants and were shade dried at room temperature. The leaf and bark were separately homogenized in to fine powder using mixer (MG 172; Preethi Kitchen Appliances Pvt. Ltd., Chennai, India) and used for further analysis.

Extraction of plant material: The powdered plant materials such as leaf and bark were packed in small thimbles separately and extracted using soxhlet apparatus (3840; Borosil Glass works Ltd., Mumbai, India) with organic solvents such as petroleum ether, chloroform and ethanol in the increasing order of polarity. The thimble was air dried before extracting with the next solvent. Finally macerated using hot water with constant stirring for 24 hours using the orbital shaker (Rivotek; Riviera Glass Pvt. Ltd., Mumbai, India) and the extract was filtered. The extracts were concentrated, air dried and stored at -20 ºC in the deep freezer (RQV- 300; plus, REMI electrotechnik Ltd., Thane, Maharashtra, India) for further analysis.

The amount of extract recovered after successive extraction was weighed and the percentage yield was calculated by the following formula,

GC-MS analysis: GC-MS analysis of S.dhaneshiana leaf and bark extracts were performed using Themo Scientific Trace 1300 Gas chromatograph equipped with ISQ- QD Mass spectrometer with TG-5MS column (30mm × 0.25mm ID ×0.25µm).  Helium gas (99.999%) was used as the carrier gas at constant flow rate 1ml/minute and an injection volume of 1µl was employed. An injection port temperature of 280 ºC and an ion-source temperature of 200 ºC was hired for this study. The oven temperature was programmed from 60 ºC for 3 minutes with an increase of 5 ºC /minute to 240ºC with a hold time of 3 minutes. Then temperature was increased at a rate of 35 ºC/min till 280 ºC with a hold time of 5 minutes. Scan interval was programmed for 0.2 seconds with a mass range of 40-450 amu. Total GC running time was 45 minutes. The components in the extract were identified based on the mass spectra of NIST library data in reference with RSI and SI value.

RESULTS AND DISCUSSION: The percentage yield of leaf and bark extracts of Syzygium dhaneshiana in different solvents are presented in Table 1. The maximum yield was obtained in ethanol extract of bark and was 4.9%. In the case of leaf, the maximum yield was obtained in chloroform (1.32%). Preliminary phytochemical screening of bark and leaves of S. dhaneshiana are presented in Table 2. GC-MS chromatogram of ethanolic extract of bark of the plant revealed 14 peaks indicating fifteen phytochemical constituents. The major compounds identified with their retention time, molecular formula, molecular weight and peak area are presented in Table 3. 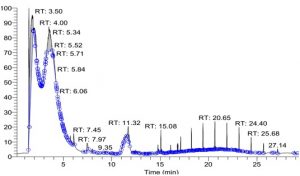 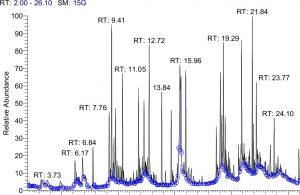 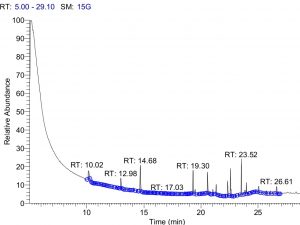 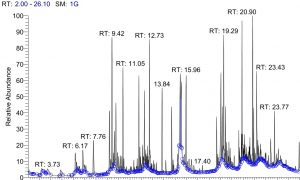 CONCLUSION: The chemical analysis of this plant has been evaluated first time. The results of GC-MS analysis and preliminary phytochemical screening designated that the bark and leaves contained numerous bioactive phytoconstituents belonging to various classes. The presence of various chemical compounds confirms that the plant hold medicinal value and further plan of study includes isolation and purification of chemical compounds.

AKNOWLEDGEMENT: The authors are thankful to Department of Science And Technology, New Delhi, India for providing financial assistance.

CONFLICT OF INTEREST: The authors declare no known conflict of interest.