INTRODUCTION: Laxatives are drug which promote defecation.  Since  normal  size,  frequency and  consistency  of  fecal  output  are  difficult  to  define  objectively  and  may  have  a wide  inter-individual  variation  depending  on  personal  habit  and  sociological  pattern,  there  is  a  tendency  to  abuse  laxative  drugs.  Previously  with  an  almost totally  vegetarian  diet  (which  has  high  fiber  content)  the  pattern  was  different  and now -a- days  with  more  consumption  of  non – vegetarian  food  the  pattern  is changing  towards  the  western  culture,  which  coupled  with  a  western  life  style leads  to  over  70%  of  patients  presenting  to  Gastroenterology  clinics  with complaints  of  either  “too  much”  or  “too  little”.

Though  laxative  agents  have  their valid  uses;  majority  of  causes  of  constipation  can  be  managed  by  increased  dietary  intake  of  fibers,  regular  exercise,  adequate  water  intake  and  bowel  training with  reassurance.  In  some  cases  where  constipation  is  a  manifestation  of  organic disease  or  some  other  systemic  ailment,  then  treatment  of  the  underlying  disease should  be  the  primary  focus  of  therapy.  Constipation  occurring  as  an  adverse  drug reaction  (analgesics,  aluminium  containing  antacids,  anticholinergics,  antihistaminics, MAO  inhibitors  etc.)  can  be  managed  by  reducing  the  dose  or  cessation  of  drug.

Phytochemical Evaluation 6: The  plant  of  Scutia  myrtina  was  collected  from  Kolli  hills,  Tamilnadu, India in the month of July, 2009.  The  shade  dried  plant  was  grinded  in  mixer  grinder  to  obtain  particle  size of  coarser  size.  The  grinded  product  was  macerated  with  absolute  ethanol  for  7 days  following  the  process  called  simple  maceration.  After  7  days  of  maceration, evaporation  of  solvent  was  done  to  obtain  semisolid  product  which  was  used  for further  in  vivo  studies. Reagents  and  Chemicals  used  were  either  of  analytical  grade  (Qualigens)   or  were  freshly  prepared.  Ethanolic  extract  of  Scutia  myrtina  was  subjected  to qualitative  analytical  test  for  the  detection  of  various  chemical  constituents  viz. Alkaloids,  steroids,  carbohydrates,  fixed  oils,  glycosides,  tannins,  proteins,  saponin and  flavonoids.  And  Alkaloids,  Glycosides  (Anthraquinone),  Flavonoids  and  Tannins  were  found  to  be  present.

Collection of Plant & Preparation of the Extract: The  plant  of  Scutia  myrtina  was  collected  from  Kolli  hills,  Tamil Nadu, India.  The  shade  dried  plant  was  grinded  in  mixer  grinder  to  obtain  particle  size of  coarser  size.  The  grinded  product  was  macerated  with  absolute  ethanol  for  7 days  following  the  process  called  simple  maceration.  After  7  days  of  maceration, evaporation  of  solvent  was  done  to  obtain  semisolid  product  which  was  used  for further  in  vivo  studies.

Drugs and Chemicals:            Glaxenna  collected  from market,  is  a  laxative  containing  Senna  as  active constituent  manufactured  and  marketed  by  Glaxo Lab. Castor  Oil  purchased  was marketed  by  Nice  pharmaceuticals  Ltd,  Other  Chemical  used  were  of  Analytical Grade  and  reagents  were  freshly  prepared.

The mice are sacrificed after 60 min.  6 animals were there in each group, (IV Groups). The  entire  intestine  is  immediately  removed  and  immersed  in  5%  formalin  to  halt peristalsis;  then  washed  in  running  water.  The  distance  the  meal  has  traveled through  the  intestine  as  indicated  by  the charcoal  is  measured  and  expressed  as percent  of  the  total  distance  from  the  pylorus  to  the  caecum.  The  charcoal  passage  test  can be  used  for  evaluation  of  laxative  activity  as  well  as  for  inhibition  of  intestinal  motility. 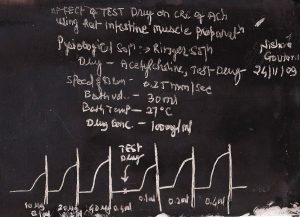 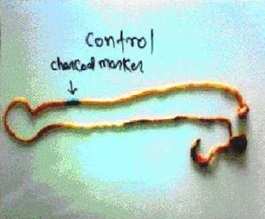 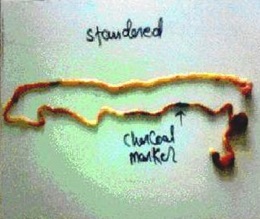 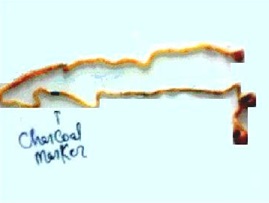 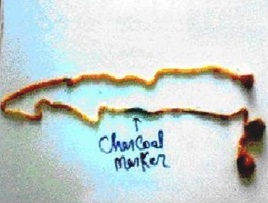 DISCUSSION: The above results indicates that Scutia  myrtina  potentiates  the  effect  of  acetylcholine  on  isolated  rat  intestine  which  indicated  the  contraction  of  rat  intestine. As well as it has significant Gut motility and thus Laxative activity, may be due to the presence of Anthraquinone Glycosides.

CONCLUSION: Finally  from  the  study  we  can  state  that  Scutia  Myrtina  has  Significant  Gut Motility  activity  which  may  be  due  to  the  presence  of  Anthraquinone  Glycosides and  can  be  further  explored  to  give  it  a  shape  of  Laxative  Formulation.