ABSTRACT: Nature is always being a consistent and constant source of medicinal substances for prevention and cure of various ailments, including the helminth infections, which is one of the health problems that affect human and livestock in the world. Because of limited availability/ accessibility of anthelmintic compounds in modern medicine, and reawakened worldwide interest in plants based medicine, the present study was undertaken to evaluate the anthelmintic activity of the stem bark of Plumeria rubra (Syn. Plumeria acutifolia) along with the qualitative and quantitative estimation of phytochemicals present in the stem bark of P. rubra, family Apocynaceae - one of the ten largest angiosperm families and comprises of several prominent medicinal plants. Out of five extracts prepared, the methanolic extract showed better yield and hence used for the present study. Preliminary phytochemical investigation reflected the presence of many phytoconstituents, mainly - alkaloids, glycosides, tannin, terpenes, flavonoid, phenol, saponin. The in-vitro anthelmintic study of stem bark extract of P. rubra with reference to standard Piperazine citrate showed prominent results in concentration dependent manner against Pheretima posthuma, as test worm. The quantitative estimation of phenols and flavonoids along with phytoconstituents like tannin, terpenes, saponin, are self explanatory for detected anthelmintic mechanism of P. rubra stem bark extract.

INTRODUCTION: The life is consistently supported by Nature, essentially by acting as a constant source of various pharmacologically active agents since from time immemorial, even Ayurveda, which is known as “Science of Life” an India’s traditional, natural system of medicine, has been practiced for more than 5,000 years, developed by natural scientists over the centuries, is also primarily based on herbs.

Out of many important medicinal plant mentioned in Ayurveda, the Plumeria is one of well known genera of laticiferous trees and shrubs, represents profuse medicinal plants, explored for various ailments like gastrointestinal complications, allergic conditions, respiratory disorders, fever, blood disorders and tumors.

Recently worldwide traditional uses of Plumeria rubra, with special reference to India, are summarized by Devi et al., 2017, in which it is reported that the decoction of the bark and roots of P. rubra is traditionally used to treat asthma, promote menstruation, and reduce fever. The latex is used to soothe irritation, abortifacient, and galactogogue. Fruit (follicle), seed paste is grounded to a fine paste and given internally on empty stomach to improve secretion of mother’s milk. The leaves are used in ulcers, leprosy, inflammations, and as rubefacient. Latex kept in sunlight on a copper plate is applied for ringworm. Bark paste is used in limited doses as a laxative (larger dose results in severe purgation). Bark cooked with rice is taken for jaundice, venereal diseases, and joint pain. Latex mixed with equal quantity of coconut oil is boiled and is applied for cuts and wounds.

According to the WHO, more than 1.5 billion people, or 24% of the world's population, are suffering with helminth infection. Detrimental health effects caused by such infections include anemia, impaired cognitive and physical development of children, complications during pregnancy, altered health of newborns, and inflammation 5. Chronic infections may lead to bladder cancer and have long-term effects on educational attainment and economic productivity 6.

Thus, helminthiasis is associated with considerable economic losses when it is also included for livestock/ veterinary world. Since there is no in-vitro anthelmintic activity along with phytochemical studies of Plumeria rubra stem bark is reported, therefore this lacking is taken up in the present study.

Collection and Extraction of Plant Material: The stem bark of Plumeria rubra was collected from Herbal Garden located in the campus of C.S.J.M University, Kanpur Uttar Pradesh, India, in the month of October 2015. After the collection, stem bark was washed thoroughly with water to ensure the absence of foreign organic matter, solid debris, fungi, organisms etc and then dried. About 1Kg of dried stem bark after size reduction was grinded with the help of grinder to make powder and stored in an air-tight container for further processing of the study. Extraction of powdered stem bark was done by Soxhlet method and each 50g of powdered bark was extracted with 250 ml of five different solvents according to their increasing polarity i.e., Hexane, Chloroform, Ethyl acetate, Ethanol and Methanol in a Soxhlet apparatus at 60 ˚C for 8 to 9 hrs. The Methanolic extract showed better yield in comparison to other solvents. At the end, the extract was passed through Whatman no.1 filter paper. The filtrates were concentrated with the aid of a vacuum oven at 40 °C. The concentrated extract was stored in cool  and dry place prior to use 7, 8. 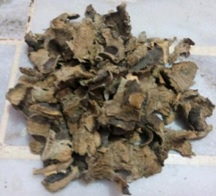 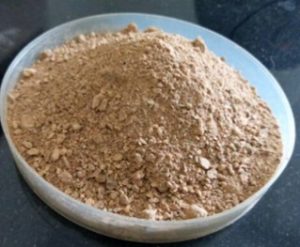 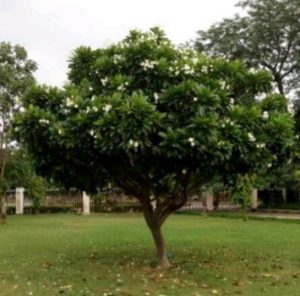 Anthelmintic Activity: The anthelmintic assay was carried as per the method of Ajayieoba et al., and Rajendra Kaur et al., with minor modifications. The anthelmintic activity was evaluated on adult Indian earthworm Pheretima posthuma (Annelida) as it resembles anatomically and physiologically with the intestinal round worm parasite of human being 9, 10. Indian earthworms were collected from water logged/moist soil area of CSJM University campus, the average size of earthworm being 6 – 8 cm. Piperazine citrate was used as reference standard. It acts as GABA agonist, by increasing chloride ion conductance of worm’s muscle membrane, causes hyperpolarization. Opening of chloride channels causes relaxation and depresses responsiveness to contractile action leads to flaccid paralysis of worms 11.

Statistical Analysis: Mean paralysis and death time of the test organisms of each extract/fraction at various concentrations were calculated and one-way ANOVA was used for statistical analysis.

The anthelmintic investigation of the methanolic extract of Plumeria rubra revealed that the higher doses (25 to 50 mg/ml) of MEPR were more potent than the positive control -Piperazine citrate (Table 3; Fig. 4).

The secondary metabolites identified in P. rubra during the qualitative phytochemical screening (Table 2) may be responsible for screened anthelmintic activity (Table 3) and could be promising alternative approach to control helminth infections 14, 15, as Alkaloids are reported to have neurotoxic properties, which effect on acetylcholine stimulated body wall muscle contraction, so act as acetyl cholinesterase inhibitor, causes worm paralysis. Antiparasitic effect via their neurotoxic potential, therefore low concentrations of glycosides in plant materials, when ingested by human, can contribute to the killing of the gastrointestinal worms through its toxic effect18, 19. 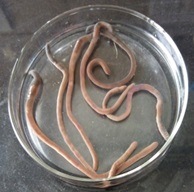 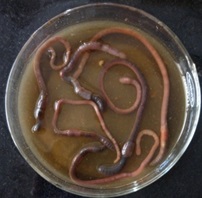 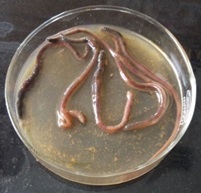 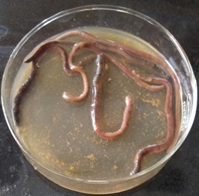 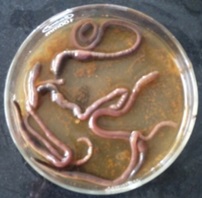 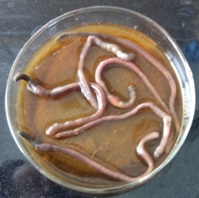 Plants like P. rubra that contain tannins are very much potent against internal nematodes in ruminants. Possible way for the effectiveness supposed to be direct parasiticidal activity but additionally also due to an increase in the host resistance 20. Tannins produces anthelmintic effect by reducing migratory ability and survival of newly hatched larvae, thus reduce worm burden and causes damage to the cuticle and digestive tissues of worms. Moreover, tannins inhibit energy generation of worms by uncoupling the oxidation phosphorylation and bind to glycoprotein on the cuticles of the worms and lead to death 21. Flavonoids detected in present study, can inhibit larval growth and inhibit the arachidonic acid metabolism which may lead to the degeneration of neurons in the worm’s body and lead to death 15.

Saponin produces anthelmintic effect by inhibiting the enzyme acetyl cholinesterase, which leads to worm paralysis and death. They affect the permeability of the cell membrane of worms and can irritate the gastrointestinal mucous membrane channel of worms that interfere with the absorption of food 22, 15. Phenols are better known for their antioxidant property, anthelmintic phytophenolics exert their inhibitory/cidal effect over helminthes is due their prooxidant activity. The bioactive terpenes/ terpenoids from plant origin have been valued for anthelmintic activity by numerous researchers. However, their precise anthelmintic mechanism of action is not established 20. Although, an anthelmintic activity of P. rubra was reported by Kumar A et al., 2009, but it was exclusively due to saponins extracted from leaves 23. Thus, from present study, it may be deduced that, in addition to leaves, the stem bark of plant also posses anthelmintic activity, which is contributed by various phytoconstituents detected (Table 2).

CONCLUSION: In the US, where chemical synthesis dominates the pharmaceutical industry, 25% of the pharmaceuticals are based on plant derived chemicals. Two third of the new chemicals identified yearly were extracted from higher plants 24. As only a handful of anthelmintic compounds are currently available, these are divided into several families that include the benzimidazoles, nicotinic agonists, macrocyclic lactones, imidazothiazoles, praziquantel, triclabendazole and cyclic octadepsipeptides 6, 20. Further, the appearance of resistance against classical drug treatments15 generate interest in the development of new anthelmintic alternatives. Therefore, authors consider the research of plants species in traditional system of medicine that may have anthelmintic activity. Traditional medicinal plants hold great promise as a source of effective treatments, including helminthiasis. Herbal medicine is readily available to people, especially in tropical and developing countries. Therefore, plants remain an important aspect of phytochemical studies and extension of research of new plants species or on Plumeria rubra, which may reveal potential anthelmintic compounds. The methanolic extract of P. rubra stem bark showed the significant anthelmintic activity, but the efficiency and safety related issues need to be confirmed. This might help in the finding of new lead compound in future.

A. Srivastava, A. K. Gupta and A. Rajendiran*