INTRODUCTION: Ferns and their allied plants have little economic significance to humankind as compared to other groups, especially Angiosperms; hence these are poorly understood or often neglected. Ferns and fern allies are very ancient group of lower vascular plants 1. Despite the large number of ferns and their allied species a considerable percentage of them are rare and threatened.

With increasing utilization of land and natural resources, it is feared that many of these threatened taxa will become yet rarer and endangered, and in several cases may finally become extinct 2. Medicinal value of pteridophytes is known to man for more than 2000 years. Theophrastuts (327 - 287 B. C.) and Dioscorides (100 A. D.) have referred to medicinal attributes of certain ferns.

Tectaria cicutaria is a species of fern in the Tectariaceae family, native to the Antilles. It has thin, soft, triangular fronds up to about 3.5 feet in length; blades are once- or twice-pinnate with the final segments pinnately lobed. The rhizomes are short and erect, dark brown or black in color with distinctive hard thick leaf bases. Tectaria cicutaria is distributed all over India.

In the local language (Marathi), it is known as Kombadnakhi. The rhizome has been used in Ayurveda for the treatment of various disorders such as rheumatic pain, chest complaints, burns, sprain, poisonous bites, tonsillitis, toothache, gum complaints, diarrhea 3 - 4. Traditional practitioners use Tectaria cicutaria as a decoction or an infusion for the treatment of various types of gynecological disorders as well as inflammatory conditions.

Based on the traditional knowledge of medicinal system, the present study was carried out to determine phytochemicals present, phenolic and flavonoid content and evaluate the anti cancer activity of different extracts of rhizomes of on human cancer cell lines.

Collection and Authentication of Plant Material: Tectaria cicutaria was collected from Koyana Wildlife Sanctuary, Western Ghats of Sahyadri hills, Satara, India. During the survey, photographs of plants were taken and selected specimens were brought to the laboratory in the sealed bags. The species of fern were identified with the help of experts using the standard floras 5 - 7. The identification of the ferns was confirmed by Dr. Sanjay S. Sathe, Associate Professor and Head / Department of Botany, PVP Mahavidyalaya, Tasgoan, Maharashtra, India. Rhizomes were washed carefully to remove earthy matter, air dried at the room temperature, ground into powder and stored in airtight container and used for successive extraction.

Preparation of Extracts: Coarse powder was subjected to hot successive continuous extraction in Soxhlet apparatus with different solvents with increase in polarity. To 50 g of plant material 400 ml solvent were added. After finishing the first Soxhlet extraction (at 40 ºC for approximately 12 h, until the solvent became colorless) with petroleum ether, subsequent to filtration the plant material was dried and subjected sequentially to the extraction with benzene, chloroform, ethyl acetate,  ethanol (approximately 24 h) and water.

Determination of Total Phenolic (TPC) and flavonoid Contens (TFC): The concentration of the phenolics in the different extracts was determined using the Folin Ciocalteau assay 11. In brief, 1 mL of extract or a standard solution of gallic acid (20, 40, 60, 80 and 100 mg/L) was added to a 25 mL volumetric flask containing 9 mL of distilled water. 1 mL of Folin Ciocalteau reagent was added to the mixture. After 5 min, Na2CO3 solution was added to the mixture. The final volume was brought up to 25 mL by adding double distilled water and the mixture was stored at room temperature for 2 h. The absorbance was determined against a blank at 750 nm. The total phenolic content was calculated using a calibration curve for gallic acid (R2 = 0. 992). The results were expressed as the gallic acid equivalent per gram of dry weight of extract (mg of GAE/g of extract). All samples were analyzed in triplicate.

The total flavonoid content was determined using the aluminium chloride colorimetric method 12. In brief, 5 mL of the extract (1 mg/mL in methanol) or a standard solution of rutin (20, 40, 60, 80 and 100 mg/L) were mixed with 5 mL of 2% AlCl3 in methanol. After a 60-min incubation at room temperature (23 ± 2 ºC), the absorbance against blank was determined at 510 nm. The total flavonoid content was calculated using a calibration curve for rutin (R2 = 0.982). The results were expressed as the rutin equivalent per gram of dry weight of extract (mg of RU/g of extract). All determinations were carried in triplicate.

Determination of Antibacterial Activity by Agar Well Diffusion Method: The bacteria used for this study were Bacillus subtilis, Staphylococcus aureus, Escherichia coli and Proteus vulgaris. These strains were clinical isolates sub-cultured and preserved in agar slants at 4 °C and used for antibacterial studies. Agar well diffusion method was employed to determine antibacterial activity 13. Well of 6 mm diameter was prepared with sterilized cork-borer. The test bacterial strains were inoculated in to Mueller Hinton Agar Medium. Different concentrations of extract were poured in the wells.

Standard antibiotics Gentamycin was served as positive control and DMSO without extract was used as a negative control. After holding the plates at room temperature for one hour to allow diffusion of the extract in to the agar, they are incubated for 24 h at 37 ºC and the zone of inhibition was measured (diameter in mm). The experiments were repeated three times and results are reported as the average of 3 experiments.

Growth inhibition of 50% (GI50) was calculated from

Each measurement was performed in triplicate 14.

Phytochemical Investigation: Table 1 shows the findings of preliminary phytochemical screening of rhizomes of Tectaria cicutaria. Seven different extracts (petroleum ether, chloroform, benzene, acetone, ethyl acetate, ethanol and distilled water) were screened for presence or absence of various organic chemical compounds. Tectaria cicutaria was reported to be rich in polyphenols 15 and our preliminary investigations have also confirmed the presence of Triterpenoid, flavanoids, saponins, tannins, phenols, and carbohydrate in Tectaria cicutaria as summarized in Table 1.

Determination of Total Phenolic (TPC) and Flavonoid Content (TFC): Phenols are compounds that have the ability to destroy radicals because they contain hydroxyl groups. These important plant components give up hydrogen atoms from their hydroxyl groups to radicals and form stable phenoxyl radicals; hence, they play an important role in antioxidant activity. Phenolic compounds have antioxidant activity and other characteristics that could promote health 16.

Therefore, determination of the quantity of phenolic compounds is very important in order to determine the antioxidant capacity of plant extracts. Phenolic compounds are widely distributed in plants and in recent years they have gained much attention, due to their antioxidant activity and free radical scavenging ability with potential beneficial implications in human health. Moreover, several reports are available on flavonoid groups which exhibited high potential biological activities such as antioxidant, anti-inflammatory, antimicrobial, anti-angionic, anticancer and anti-allergic reactions 17.

The amount of the total phenolic content and total flavonoid content in ethanolic extract (T1) is 27.25 ± 1.37 gallic acid equivalents (GAE mg/g) and 3.16 ± 0.76 rutin equivalents (RU mg/g) of dry weight of extract, respectively. The total phenolic contents (TPC) and total flavonoid contents (TFC) of ethanolic extract were found significantly higher as compared to other solvent fractions. The quantity of TPC and TFC in T1 and T2 and T3 extracts of Tectaria cicutaria is shown in Table 2. Total phenolic content could be regarded as an important indication of antioxidant properties of plant extracts 18. Tannins are major source of phenolic compounds and are good radical scavengers and antibacterial agents 19. It has been confirmed that consumption of phenolic rich foods or beverages prevent diseases, such as cancer, heart disease, inflammation, arthritis, immune related diseases, neurodegenerative diseases and diabetes.

Antimicrobial and Anticancer Activity: In present study in-vitro anti-microbial activity of the ethanol extract of Tecatria cicutaria was determined against two gram positive (Bacillus subtilis and Staphylococcus aureus) and two gram negative bacterial strains (Escherichia coli and Proteus vulgaris). The results of antibacterial activity of ethanolic extract of Tectaria cicutaria are illustrated in Table 3. The ethanol extract showed zone of inhibition only against Proteus vulgaris. 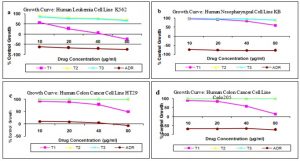 CONCLUSION: This study supports the traditional use of Tectaria cicutaria and revealed the phytochemicals present in it. Results indicated presence of significant amount phenolic contents, and flavonoid contents in ethanolic extract. It showed antimicrobial activity against Proteus vulgaris. In addition, the study showed the excellent anticancer activity of Tectaria cicutaria. Tectaria cicutaria was active against leukemia cell line with GI50 value 11.9 µg/ml. Apparently, the promising active principles in Tectaria cicutaria inhibits leukemia indicating need to investigate underlying mechanism by which this activity was exhibited.

CONFLICT OF INTEREST: We have no conflict of interest to declare.