ABSTRACT: Methanolic extract of leaves and seeds of Holarrhena antidysenterica was appraised individually to investigate the cytotoxic activity and CNS depressant activity of the leaf extract was observed adopting both open field test and hole cross test. Phytochemical screening with the leaf extract only, suggested the presence of alkaloids, cardiac glycoside, steroids, flavonoids, tannins and saponin. Brine shrimp lethality bioassay indicated significant  cytotoxicity for both methanolic leaf and seed extract dissolved in DMSO (LC50  value 0.571 µg/ml and 0.466 µg/ml respectively) while LC50 value obtained by the standard, Vincristine Sulphate was 0.348 µg/ml. Neuropharmacological experimental models in mice by hole cross and open field test indicated convincing CNS depressing activity of the leaf extract on Swiss albino mice at the dose of 100 mg/kg, 200 mg/kg and 300 mg/kg body weight whereas positive control Diazepam was used at a dose of 5mg/kg body weight. The validation of anxiety was carried out by measuring external signs, through hole-cross tests. Dose dependant activity was also identified by all the performed pharmacological investigations. Thus, this plant shows potential for further studies in future drug investigations.

INTRODUCTION: Holarrhena antidysenterica (family Apocynaceae) is mainly available in colder climate with high altitude.  In India, it is available in the tropical Himalayan region whereas in Bangladesh it grows in Chittagong and Sylhet area. Traditionally, the bark is used for astringent, anthelmintic, stomachic, febrifugal and tonic properties in the treatment of amebic dysentery and diarrhea. Antidiabetic efficacy of methanol extract of total plant part and ethanol extract of seed have reported 1, 2, 3. Holarrhena antidysenterica has gut stimulant and relaxant activities and it’s bark has antihyperglycemic and antihyperlipidemic effects 4, 5.

The conessine alkaloid isolated from the bark of this plant has anti-malarial property 6. With principle alkaloid conessine, other alkaloids present in the bark are conamine, conkurchine, connessimine, kurchine, conarrhinine, holarrhinene and isoconcessimine. This study has been conducted to investigate different phytochemical properties of the leaf part and the mathanolic extract was looked into for Cytotoxic and CNS depressant activities.

Plant material collection and extract preparation:  Plant leaves were collected from Gazipur, Bangladesh. Later the plant was identified at Bangladesh National Herbarium institute, Mirpur, Dhaka (Accession Code: 381570). Following 10 days of drying the leaves and bark, grinding was done to powder the material with a Blender Machine (Nowake, Japan) which resulted in coarse powder. The powder material was extracted using methanol, in room temperature for 15 days. Extract was then filtered with Whatman filter paper number 1, while the existing material was re-extracted for a week. The final methanol extract was dried by the help of a rotary evaporator followed by freezedrier 7, 8.

For bioassay screening by brine shrimp (Artemiasalina), which indicate cytotoxicity and a wide range of pharmacological activities such as antimicrobial, antiviral, pesticidal and anti-tumor etc. of the compounds, the methanolic extract of the leaf and seed part was dissolved in DMSO 9. The nauplii were counted by visual inspection and taken in vials containing 5 ml of simulated sea water. Different concentration samples were added to premarked vials which were left for 24 hours, following the recounting of nauplli to find out the cytotoxicity level of the test agents 10. As standard, vincristine sulphate was used 11. And the results have been shown as a mean 12.

The Open Field Test (OFT) is used as a behavioural measure in pharmacology and neuroscience 13. Mice were treated with a placebo (control group), Diazepam (positive control group) and leaf extract of Holarrhena antidysenterica (experimental group) and were observed at a time interval (on 0, 30, 60 and 90 minutes after administration) for a specified period to note the number of fields crossed by each group. Diazepam (1 mg/kg body wt.) was used in intra peritoneal route 14. Experimental Group 1 was orally fed the extract at dose 100 mg/kg body weight, while Group 2 and 3 were fed at dose of 200 mg/kg and 300 mg/kg body weight respectively. The mean number of open fields crossed by mice of each groups were compared to detect neuropharmacological activity.

The method was accomplished in accordance to S.k. Mishra et al. (2011) studies 15. A wooden box (30 cm × 20 cm × 14 cm) was built with a partitioning wall and a hole of 3 cm diameter at a height of 7.5 cm from the floor where the mice were placed on one side of the specified instrument after intra peritoneal injection of test drugs. Spontaneous movement of the mice from one chamber to other through the hole was observed for 3 min. The observations were conducted at 0, 30, 60 and 90 minutes.

RESULT AND DISCUSSION: Preliminary phytochemical screening of the methanolic extract of plant-leaf revealed the existence of Alkaloids, Steroids, Saponins, Glycosides, Tanins and Flavonoids. Presence of Carbohydrate and Reducing sugar could not be detected 16, 17, 18. Table 1 and 2 show the results of the brine shrimp lethality after a 24 hr exposure to all the samples and Vincristine Sulfate (positive control). The positive control, compared with the negative control (sea water) was lethal, giving notable mortality to the shrimp

The methanolic extract of the leaves and seeds of Holarrhena antidysenterica showed mild cytotoxic activity against brine shrimp nauplii with respectively LC50 value of 0.571 μg/ml and 0.466 μg/ml compared to the standard vincristine sulphate (0.348μg/ml). Cytotoxic activity exhibited by these solvent fractions was quite promising which mark the presence of potent bioactive compounds. According to the observations from Tables 3 and 4, methanolic leaf extract decreased the loco motor activity as suggested by the results of both the open field and hole cross tests.

So, CNS depressant activity of the methanolic leaf extract of Holarrhena antidysenterica can be suggested hopeful. 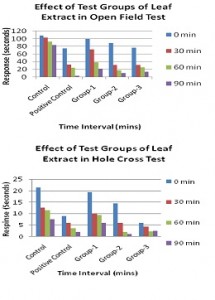 CONCLUSION: The cytotoxic CNS depressant activities of various fractions of Holarrhena antidysenterica leaves and seeds, found in this study, might embark on some of the traditional medicinal uses of this plant. This evidence could be of particular interest in respect to uncover the unexplored efficacy in addition to being a potential source of chemically interesting and biologically important drug candidates.

ACKNOWLEDGMENT: The authors were grateful to Stamford University Bangladesh for providing lab facilities for carrying out the required research work.