ABSTRACT: Medicinal plants are a source of naturally active compounds used extensively by tribal people worldwide for many ailments.  Withania somnifera (WS) is one such plant used to treat many ailments from the time of Ayurveda.  Extraction of the bioactive plant constituents from the whole plant or from the different parts of the plant has always been a challenging task.  As the dried roots of WSare widely used in the treatment of many disorders, the current investigation aimed at extraction and detection or screening of active phytochemical compounds from different extracts of WS root.  Phytochemical screening of different extractions revealed the presence of phenols, flavonoids, tannins, saponins, alkaloids, steroids, terpenoids, glycosides and reducing sugars which could account for its varied medicinal properties like anti-inflammatory, anti-spasmodic, anti-analgesic, neuroprotective and diurectic effects.

Since ancient times, people have been exploring nature particularly plants, in search of new drugs, and this has resulted in the use of a large number of medicinal plants with curative properties to treat various diseases 2.

Nearly 80% of the world’s population relies on traditional medicines for primary health care, most of which involve the use of plant extracts 3. In India, almost 95% of the prescriptions have been reported to be plant based in the traditional systems of Unani, Ayurveda, Homeopathy and Siddha 4.

Plants can produce different kind of secondary metabolites also known as natural products as they elicit effects on other organisms 7.

Withania somnifera (L. Dunal) (WS), known as Indian ginseng, is a dense pubescent shrub, which grows about 2 feet in height and belongs to the family of Solanaceae.  It is a popularly known medicinal plant for its therapeutic use in Unani and Ayurvedic systems of traditional medicine of India and locally known as Ashwagandha 8, 9.  It is capable of growing widely not only in all the drier parts of India but also in Bangladesh, Congo, South Africa, Egypt, Morocco, Jordan, Pakistan and Afghanistan, which offers tremendous potential as an energizing medicinal herb 10. The roots are the main portions of the whole plant, as they possess wide number of therapeutic agents.  The herb is termed as rasayana in Ayurvedic practice, which means it acts as a tonic for vitality and longevity 10.  WS stimulates the immune system cells, such as lymphocytes and phagocytes, which also counteract the effects of stress and generally promote wellness 11-13.

In order to promote Indian herbal drugs, it is imperative to initiate urgent steps for screening of plants for secondary metabolites.  Many workers have reported the phytochemical screening in various plants 14-16.  Many pharmacological studies have been conducted to investigate the properties of ashwagandha and to authenticate its use as a multi-purpose medicinal agent 17.

The present communication helps to assess the status of phytochemical properties of roots of WS, which could account for its varied medicinal properties.

Extraction: The dried roots were ground into a coarse powder using a pulverizer. Fine ground pulverized material was dissolved in different solvents as described in figure 1. 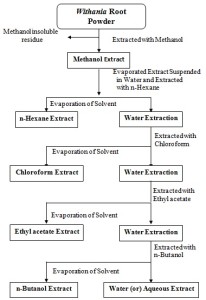 FIG. 1: PREPARATION OF DIFFERENT EXTRACTS FROM THE ROOT OF WS USING THE DIFFERENT SOLVENTS

Powdered plant material was soaked in methanol for 24 hrs. at room temperature and the solvent was filtered with Whatman filter paper (125mm).  This was repeated 3-4 times until the extract gave no coloration. The extract was distilled and concentrated under reduced pressure in the Buchi Rotavapor R-114 yielding a gum-like residue.

The same was repeated with organic solvents and distilled water of increasing polarity (starting with lipophilic solvent n-Hexane, ending with the more hydrophilic n-Butanol). The solvent from each extract was filtered and concentrated under reduced pressure in Buchi rotavapour. Finally the crude extracts were collected, weighed and stored in refrigerator at 4oC for further phytochemical analysis.

Detection of Alkaloids:Extracts were dissolved individually in dilute HCl and filtered.

Detection of Steroids and Terpenoids:

The concentrations of extractions obtained from the root of WS are shown in figure 2. 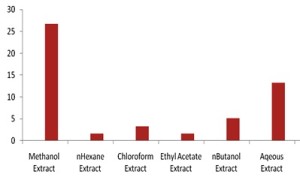 Preliminary phytochemical screening of the crude extracts of WSroot revealed the presence of different kind of chemical groups (Summarized in table 1).

The presence of bioactive compounds indicate the medicinal value of various extracts of WSplant, because their possible use as natural additives emerging from a growing tendency to replace synthetic antioxidants and antimicrobials with natural ones 19.

TABLE 1: PRELIMINARY PHYTOCHEMICAL SCREENING OF THE CRUDE EXTRACTS OF WS ROOT REVEALED THE PRESENT OF DIFFERENT KIND OF CHEMICAL GROUPS THAT ARE SUMMARIZED IN BELOW TABLE

Active chemical constituents and their medicinal values: The active chemical secondary metabolites present in the roots of WS are believed to account for its extraordinary medicinal properties as shown in the table 2.

Alkaloids: Alkaloids, which are chemically heterogenous group of natural substances and pharmacologically active compounds, compose more than 6000 basic nitrogen containing organic compounds, which occur in about 15% of all vascular terrestrial plants and in more than 150 different plant families.

Alkaloids are used for the treatment of tumors, nocturnal leg cramps caused by vascular spasms and diarrhea. These compounds possess anti-microbial activity and sedative effects. Many alkaloids are anesthetics and have calming effects on psychotic or hypertensive patients without inducing sleep. Alkaloids can also be used to treat psychiatric and palpitation 20.

It has been reported that total alkaloids extracted from extract of WS roots, caused relaxant and antispasmodic effects against various agents that produce smooth muscle contractions in intestinal, uterine, tracheal, and vascular muscles 21.

TABLE 2:  ACTIVE CONSTITUENTS AND THEIR MEDICINAL VALUE OF DIFFERENT EXTRACTS OF WS ROOT

Flavonoids help to strengthen capillary walls. These compounds, at times, are referred to as phytoestrogens.  Phytoestrogens are associated with relief of menopausal symptoms, reduction of osteoporosis, improvement of blood cholesterol levels and lowering the risk of certain factors related to cancer and coronary heart diseases 22.

Saponins: Saponins are heterogeneous group of natural products found in many plant-derived foods and medicinal plants. There are two types of saponins: triterpenoids and steroidal saponins.  Many plants containing steroidal saponins have a marked hormonal activity while triterpenoids, saponins are often strong expectorant and aid the absorption of nutrients. Saponins extracted from plants show biological and pharmacological activities such as anti-inflammatory, anti-hepatotonic, wound healing, veinotonic, expectorant, spasmolytic, hypoglycemic, antimicrobial and antiviral 20. Traditionally the saponins present in WS have been extensively used as detergents, pesticides and molluscicides, in addition to their industrial applications as foaming and surface active agents and also have beneficial health effects 29, 30.

Tannins:  Tannins are members of polyphenol chemical family. Tannins are produced to a greater or lesser degree by all plants.  They draw the tissues together and improve their resistance to infection. Tannin compounds presented in WS inhibits the growth of many fungi, yeast, bacteria and viruses 31.

Tannins are attributed with analgesic and anti-inflammatory activities.  Apart from this, tannins promote the healing of wounds and inflamed mucous membrane with the property of astringency 32, 27.

Phenols:  Phenolic compounds are plant secondary metabolites that constitute one of the most common and widespread groups of substances in plants 33. Phenols are antiseptic and reduce inflammation when taken internally.  These bioactive agents have an irritant effect when applied to the skin.  Above of all, phenols have a high affinity to chelate metals and scavenge the free radicals in cells 34. Polyphenols act as antioxidants, which protect cells and body chemicals against damage, caused by free radicals and reactive atoms that contribute to tissue damage in the body.  It has been reported that these compounds deactivate the substances that promote the growth of tumors 20.

Glycosides:  Glycosides are molecules in which a sugar is bound to a non-carbohydrate moiety, usually a small organic molecule.  Glycosides can suppress and soothe irritant dry coughs.  They have a helpful sedative and relaxant effect on the heart and muscles when taken in small doses.  They are significantly diuretic 27.

CONCLUSION: Plants that are rich in secondary metabolites, called medicinal plants, are widely used in traditional medicine to combat and cure various ailments. WS is a plant used in medicine from the time of Ayurveda, the ancient system of Indian medicine. The different extracts of root of WS contained many bioactive chemical constituents including, alkaloids, glycosides, steroids, terpenoids, saponins, tannins and reducing sugars.   The anti-inflammatory, antispasmodic, antianalgesic and diuretic effects can be attributed to the high steroids, tannins, terpenoids, saponins and glycosides present in WS.  It has been used as an aphrodisiac, neuroprotective, liver tonic, astringent, and to treat bronchitis, asthma, ulcers, emaciation, insomnia, and senile dementia. While WS has been used successfully in Ayurvedic medicine for centuries, more clinical trials should be conducted to support its therapeutic use.

The present study can be used in future for the economical formulation of the active chemical ingredients in natural drugs against a variety of neurological and inflammatory diseases.

ACKNOWLEDGEMENTS: The authors acknowledge the profound gratitude to the Science and Engineering Research Board (SERB), Govt. of India for providing the funds under “Fast Track Scheme for Young Investigators” (Ref No. SR/FT/LS-199-2009).