PHYTOCHEMICAL SCREENING ON THE AERIAL PART OF THE LUFFA ECHINATA LINN.

PHYTOCHEMICAL SCREENING ON THE AERIAL PART OF THE LUFFA ECHINATA LINN.

The present work deals with development and standardization of phytochemical screening for quantification of ethanolic extract of aerial part of the Luffa echinata Linn. The scientific parameter is necessary to identify the exact plant material and to find its quality and purity. The present study deals with various, physical evaluation and preliminary phytochemical screening of various successive extracts such as qualitative chemical analysis. HPTLC of extract shows the seven different peaks confirming that the seven compounds present in ethanolic extract of Luffa echinata. The alkaloidal content of aerial part of the plant has been determined. These studies indicated the possible information for correct identification and standardization of this plant material.

INTRODUCTION: Luffa echinata Linn. is a climber with bifid bristly or smooth tendrils. Stem is sulcate, slightly hairy to smooth. Leaves are kidney-shaped, round, shallowly or deeply 5-lobed. Tip is rounded or rarely pointed. Leaves are bristly on both surfaces, margin is minutely toothed. Leaf stalk is stout, bristly, up to 12 cm long. Flowers are white, stalked, about 2.5 cm across. Male flowers are borne in 5-12-flowered, up to 15 cm long raceme. Sepal tube is about 5.6 mm long, hairy, sepals lance-shaped. Petals are ovate, 1-1.2 cm long, blunt, hairy at the base. Stamens are 3, with filaments united, 3-9 mm long. Ovary is ovoid. Fruit is ashy, oblong, ovoid, 2-5 cm long, densely covered with 4-7 mm long bristles. Seeds are ovate, black 4-5 mm long, 3-5 mm broad and 2 mm thick. The fruit is intensely bitter and used medicinally. Flowering: August – September 1. 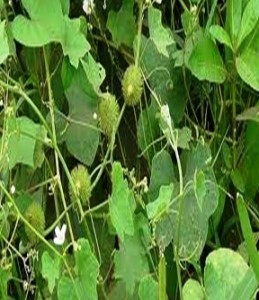 Medicinal use of luffa echinata in the traditional Ayurvedic System:

Plant Material: The aerial part of the Luffa echinata Linn. was collected from District- Jhansi (U.P.) during the month of September 2010.  Authentication of plant materials is done by Dr. Tariq Husain (Head & Scientist, Herbarium), National Botanical Research Institute (NBRI), Lucknow with Accession no. 97842.

Preparation of extract: The aerial part of Luffa echinata Linn. shaded dried, and then these are made into coarsely powdered form using dry grinder. The powdered bark of the plant (250 gm.) was packed in Soxhlet’s apparatus and continuously extracted with petroleum ether (40-60oC) till complete extraction, after completion of extraction the solvent was removed by distillation and the concentrated extract obtained was dried under reduced pressure using rotatory evaporator at temperature not exceeding 400 C and then give moderate heating on water bath.

A yellowish extract approximate 1 gm was obtained. From the drug, petroleum ether was removed and the defatted drug was extracted with ethanol (95 %) till complete extraction, after completion of extraction the solvent was removed by distillation and then concentrated extract obtained dried under reduced pressure at temperature not exceeding 400 C and then give moderate heating on water bath. The ethanolic extract obtained was dark yellow in color, weighed about 46.4 gm. The ethanolic extract was kept in Petri dish and it was stored in desiccator at cool place and its extractive value is 15.70 %.

Thin Layer Chromatography:           Thin Layer Chromato- graphy (TLC) is an extremely useful technique for monitoring reactions. It is also used to determine the proper solvent system for performing separations using column chromatography. TLC uses a stationary phase, usually alumina or silica that is highly polar (standard) or non-polar (reverse phase). The mobile phase is a solvent whose polarity you will choose. In 5.301, and in most lab applications, you will use standard phase silica plates. You will apply your reaction mixture in solution to the plate and then "run" the plate by allowing a solvent (or combination of solvents) to move up the plate by capillary action. Depending on the polarity of the components of the mixture, different compounds will travel different distances up the plate.

More polar compounds will "stick" to the polar silica gel and travel short distances on the plate. Non-polar substances will spend more time in the mobile solvent phase and travel larger distances on the plate. The measure of the distance a compound travels is called the Rf value. This number, between zero and one, is defined as the distance the compound moved from the baseline (where it was originally spotted) divided by the distance the solvent front moved from the baseline.

Cut TLC Plates: Usually silica plates are bought as square glass pieces that must be cut using a diamond tipped glass cutter and following a template. Before scoring the glass, use a ruler and a pencil to lightly mark baselines on the silica side of the plate (be careful not to remove any silica from the plate). Using a sharp glass cutter and a ruler as a guide, you should have no problem scoring the glass. Once the entire plate is scored, you can then break the glass into individual pieces. (In the beginning this may be frustrating, but after some practice, you should become comfortable with this technique).

Preparation of Plates: Silica gel G was used as the adsorbent. Slurry of it was prepared with distilled water in a glass pestle mortar. The slurry was poured on the clean and dry glass plates and spread on the plate as a uniform coating using a glass rod. These plates were then placed on a leveled surface in the horizontal position and allowed to air dry for 20-25 minutes.

Activation of Plates:  When the plates were dried they were placed in an oven, maintained at 110oC for 30 minutes. The prepared plates were stored in a closed desiccated cabinet and removed only when required for use.

Preparation of Samples: About 100 mg of test material was dissolved in 10 ml of the respective solvent and used for the TLC studies.

Determination of an appropriate Solvent System: Your compounds will travel different distances up the plate depending on the solvent you choose. In non-polar solvents like pentane and hexane, most polar compounds will not move, while non-polar compounds will travel some distance up the plate. In contrast, polar solvents will usually move non-polar compounds to the solvent front and push the polar compounds off of the baseline. A good solvent system is one that moves all components of your mixture off the baseline, but does not put anything on the solvent front - Rf values between 0.15 and 0.85. This is not always possible, but should be your goal when running a TLC. (For column chromatography the correct solvent system should give an Rf between 0.2 and 0.3.) Now, which solvents to pick, here is a list of some standard solvents and their relative polarity.

Application of Spots: The spots were applied on the activated plate at a distance of 2 cm from one end of the plate and 3 cm from each other with the help of a fine capillary tube or diameter less than 1 mm. The solvent was removed from spot by air-drying. The position of the origin was marked.

Development of Chromatograms: Chromatograms were developed by one way ascending TLC. The plate carrying spots was placed squarely in the developing chamber and the lid was replaced as quickly as possible to minimize disturbance of the solvent saturated atmosphere. The developing solvent was allowed to travel up the plate until it reached the desired level (10 to 15 cm). The plate was then removed from the chamber; solvent front was marked and dried in air at room temperature 5.

Detection of Spots: The number and position of the various constituents present in the mixtures was determined by spraying the plate with the 1% vanillin in sulphuric acid and the plate was heated at 110 0C for 10 minutes and the spots were marked. Rf value was calculated 6, 7. 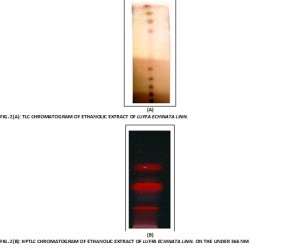 ACKNOWLEDGEMENT: The authors are grateful to Dr. S. K. Prajapati, Head, Institute of Pharmacy, Bundelkhand University, Jhansi, India, for providing the necessary laboratory facilities and we are also thankful with our deepest core of heart to Dr. S. K. Jain for his valuable guidance.