PHYTOCHEMICAL SCREENING ON THE STEM BARK OF ANTHOCEPHALUS CADAMBA (ROX B.) MIQ.

PHYTOCHEMICAL SCREENING ON THE STEM BARK OF ANTHOCEPHALUS CADAMBA (ROX B.) MIQ.

The present work deals with development and standardization of phytochemical screening for quantification of methanolic extract of medicinal plant stem bark of Anthocephalus cadamba (Roxb.)Miq. The scientific parameter is necessary to identify the exact plant material and to find its quality and purity. The present study deals with various, physical evaluation and preliminary phytochemical screening of various successive extracts such as qualitative chemical analysis and different spectroscopic study were carried out and the parameters were reported. HPTLC of extract shows the seven different peaks confirming that the seven compounds present in methanolic extract of Anthocephalus cadamba. The alkaloidal content of stem bark of the title plant has been determined. These studies indicated the possible information for correct identification and standardization of this plant material.

The various part of the tree is widely used in Ayurveda, Siddha and Unani system of medicine. Anthocephalus cadamba stem bark is reported to possess tonic, astringent febrifugal and anti-diuretic properties and is given in cough. The juice of the bark forms constituents of a compound to treat in flammation of the eye. The dried bark has been reported to contain steroids alkaloids; fats and reducing sugar and also used for Improvement of Semen Quality.   The major constituents of bark are triterpenes, triterpernoids, glycosides, indole alkaloids.5

Kumar V., et al (2008) studied the lipid lowering activity of Anthocephalus indicus (family Rubiaceae; Hindi name Kadamba) root extract in triton WR-1339 induced hyperlipidemia in rats. Kapil A., et al (2002) screened the effect of chlorogenic acid (CGA) isolated from Anthocephalus cadamba for hepatoprotective activity by in vitro and in vivo assay methods using carbon tetrachloride (CCl4) as a model of liver injury . Umachighi S.P., et al (2007) had reported antibacterial, wound healing and antioxidant activity of bark of Anthocephalus cadamba. The objective of this work is too carried out phytochemical screening to isolate active constituents of methanolic extract of A. cadamba.

Plant Material: The stem bark of Anthocephalus cadamba (Roxb.)Miq.  was collected from Orai, Distt- Jalaun (U.P.). The plant materials was identified and Authenticated by Dr. Gaurav Nigam, Department of Botany, Institute of basic Science, B. U. Jhansi (U.P.), India. Ref. No- B.U./Bot./375/24-01-09.

Preparation of Extract: The stem bark of Anthocephalus cadamba (Roxb.)Miq.   shaded dried, and then these are made into coarsely powdered form using dry grinder. The powdered bark of the plant (180gm.) was packed in soxhlet apparatus and continuously extracted with petroleum ether (40-600C)  till complete extraction, after completion of extraction  the  solvent was  removed by distillation and then  concentrated extract obtained was dried under  reduced pressure using rotatory evaporator at temperature not exceeding 400C and then give moderate heating  on water bath.

A yellowish extract approximate 1 gm. was obtained. From the drug petroleum ether was removed and the defatted drug was extracted with methanol (95%) till complete extraction, after completion of extraction the solvent was removed by distillation and then concentrated extract obtained dried under reduced pressure at temperature not exceeding 400C and then give moderate heating on water bath. The methanolic extract obtained was dark yellow in color, weighed about 42.8 gm.  The methanolic extract was kept in Petridis and it was stored in desiccator at cool place 2.

Preparation of Plates: Silica gel G was used as the adsorbent. Slurry of it was prepared with distilled water in a glass pestle mortar. The slurry was poured on the clean and dry glass plates and spread on the plate as a uniform coating using a glass rod. These plates were then placed on a leveled surface in the horizontal position and allowed to air dry for 20-25 minutes.

Activation of Plates: When the plates were dried they were placed in an oven, maintained at 1100 C for 30 minutes. The prepared plates were stored in a closed desiccated cabinet and removed only when required for use.

Preparation of Samples: About 100 mg of test material was dissolved in 10 ml of the respective solvent and was used for the TLC studies.

Application of Spots: The spots were applied on the activated plate at a distance of 2 cm from one end of the plate and 3 cm from each other with the help of a fine capillary tube or diameter less than 1 mm. The solvent was removed from spot by air-drying. The position of the origin was marked.

Development of Chromatograms: Chromatograms were developed by one way ascending TLC. The plate carrying spots was placed squarely in the developing chamber and the lid was replaced as quickly as possible to minimize disturbance of the solvent saturated atmosphere. The developing solvent was allowed to travel up the plate until it reached the desired level (10 to 15 cm). The plate was then removed from the chamber; solvent front was marked and dried in air at room temperature 3.

Detection of Spots: The number and position of the various constituents present in the mixtures was determined by spraying the plate with the 1% vanaline in sulphuric acid and the plate was heated at 110 0C for 10 minutes and the spots were marked. Rf value was calculated for well 4, 5, 6. 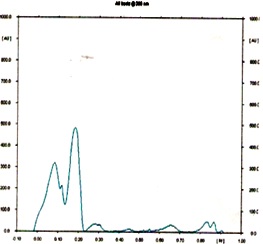 Characterization of Isolated Compound: The compound which is isolated in column chromatography is characterized by the analytical techniques such as Infrared spectroscopy, NMR spectroscopy and Mass spectroscopy. 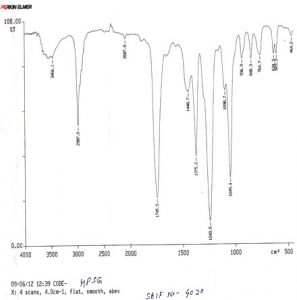 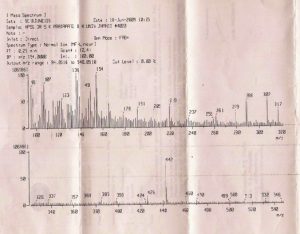 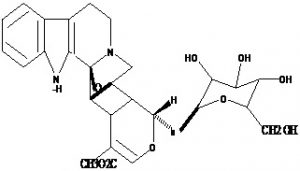 RESULT AND DISCUSSION: Phytochemical evaluation of methanolic extract of Anthocephalus cadamba (Roxb.)Miq. showed the presence of flavonoids, alkaloids, carbohydrate, proteins, and glycoside compounds.  Best result of Thin Layer Chromatography in the solvent system: Ethyl acetate: methanol: water: formic acid (16: 0.2: 1.6: 0.7) was found in which 7 spots were present with Rf values 0.06, 0.10, 0.14, 0.40, 0.50, 0.60, 0.70 same solvent system. By analytical study, it was found that Cadambine compound get isolated from methanolic extract of Anthocephalus cadamba. 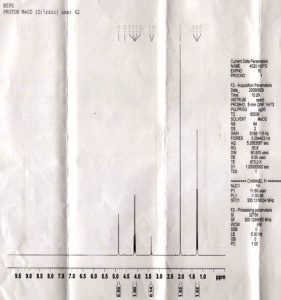 ACKNOWLEDGEMENT: The authors are grateful to Dr. S.K. Prajapati, Head, Institute of pharmacy, Bundelkhand University, Jhansi, India for providing the necessary laboratory facilities and we are also thankful with our deepest core of heart to Dr. S. K. Jain for his valuable guidance.