ABSTRACT: The whole plant of Spermacoce hispida L is reported to have great medicinal value.It is found effective systemically in treating, headache, constipation, anti-hypertensive, anti-fertility, Appetite, Scabies, Irritant bowel syndrome and skin disease etc. Intake of 2 to 4 g of the seeds along with a mixture of dry ginger, coriander seed andfinger millet reduces the unwanted cholesterol namely LDL and HDL from the body. Traditionally roots, leaves and stem of the Spermacoce hispida L are used as anti-eczema, antibacterial and cardio-vascular disorder, etc. Recently it is found that this herb contains Calcium and Phosphorus in the abundance hence administration of this drug in form of chooranam or kudineer (decoction) is recommended in conditions like bone diseases, fractures etc The present investigation was therefore undertaken to evaluate the requisite phytochemical screening andthe constipation activity of Spermacoce hispida by using albino Wistar rats. Phytochemical analysis was carried out with different chemical reagents.Constipation activity of Spermacoce hispida   was analyzed by using albino Wistar rats.To cure the irritant bowel syndrome using the whole plant of hydro alcoholic extract instead of loperamide. These studies provided crucial information about the constipation activity of the whole plant hydro alcoholic extract. Further studies may be carried out to characterize and screen the valuable compounds present in the whole plant.

INTRODUCTION:Medicinal plants have been used, since times immemorial in virtually all cultures as a source of medicine. Herbal remedies and plant-based healthcare preparations obtained from traditionally used plants have been traced to the occurrence of natural products with medicinal properties.

Moreover medicinal plants and herbal remedies are re-emerging medical aids whose contribution and significance in the maintenance of good health and well-being is widely accepted 1.

In addition to the use in the developing world, herbal medicine is used in industrialized nations by alternative medicine practitioners such as naturopathy. A 1998 survey of herbalists in the UK found that many of the herbs recommended by them were used traditionally but had not been evaluated in clinical trials 2.Many of these herbs have been used traditionally and are rated by herbalists as being safe and effective, but lack evidence to support this from controlled clinical trials 3.  In Australia, a 2007 survey found that these Western herbalists tend to prescribe liquid herbal combinations of herbs rather than tablets of single herbs 4.

Spermacoce hispida (Rubiaceae) was popularly known as “Nattaiccuri” in Tamil or “Shaggy button weed” in English. The seed-extract of the plant has been used as a remedy for the treatment of many ailments such as internal injuries of nerves and kidney. It is suggested that it removes signs of old age, purify blood and improve vitality and have been used by the tribal’s living in the forest regions in the Western Ghats of Kerala since ancient times 5.

It has been also reported that Spermacoce hispida is an effective natural drug for the treatment of hypertension 6.The whole plant is used for medicinal properties; it is widely distributed in the Western Ghats of Kerala and in Maruthamalai forest, which is an extension of the Western Ghats in Tamilnadu 7. Spermacoce hispida was one of the five plants, which contained the maximum amount of flavonoids among 25 plants analyzed 8. It has been reported that the methanolic extract of this whole plant extract exhibited strong antioxidant activity 9.

At present no known scientific study reported in available literature sources that has been carried out so far an irritable bowel syndrome and constipation activity of the whole plant extract. Therefore, the study is aimed at exploring the plant (whole) Spermacoce hispida (Rubiaceae)

a)       Drugs and chemicals: Loperamide Hydrochloride and Carmine were used for this study. All other chemicals and reagents used were of analytical grade.

b)      Experimental Animals: Albino Wistar rats of weighing between 150-160gm were used for this study. The study was carried in accordance with the rules and regulations laid by the Institutional Animal Ethics Committee. The animals were housed under standard conditions and room temperature (25±2oC). All animals were fed with standard rat pelleted diet (M/S Pranav Agro Industries Ltd., India). Under the trade name Amrut rat/mice feed and had free access to tap water ad libitum. The study has got approval from the Institutional Animal Ethics Committee, Animal house facility (Registration No: 743/abc/ CPC SEA), PRIST University, Thanjavur, Tamil Nadu, India.

Phytochemical Screening: The dried plant powder of Spermacoce hispida was subjected to a systematic phytochemical screening by successively extracting with various organic solvents and the extracts were subjected for phytochemical investigation by Qualitative chemical identification tests. Primary metabolites like carbohydrates, proteins, fixed oils, fats, gums and mucilages were analyzed for their presence as per the standard procedures. Likewise the secondary metabolites of alkaloids, flavonoids, saponins, glycosides were also performed in the formulation.

Then, the excessive solvents were removed by using Rotary vacuum evaporator (MAC Buchi type). These extracts were stored in desiccators for further analysis.

i.      Detection of Alkaloids: Extracts were dissolved individually in dilute Hydrochloric acid and filtered.

ii.      Detection of Carbohydrates: Extracts were dissolved individually in 5 ml distilled water and filtered. The filtrates were used to test for the presence of carbohydrates.

3. Detection of Glycosides: Extracts were hydrolyzed with dil. HCl, and then subjected to test for glycosides.

10. Detection of Diterpenes: Copper acetate Test: Extracts were dissolved in water and treated with 3-4 drops of copper acetate solution. Formation of emerald green color indicates the presence of diterpenes.

Experimental Design 10: A total of 30 animals were used for this study. They were grouped into five groups. Each group comprising of six animals (n=6).

Observation of Fecal Pellets: The excreted fecal pellets of individual rats were collected daily at the particular time (9.00 am).

The following parameters were determined throughout the duration of the study

Statistical analysis: Data were expressed as Mean±SD. One way analysis of variance (ANOVA) followed by Bonferroni's Multiple Comparison test was performed to determine significant differences in all parameters.

Values were considered statistically significant at P < 0.05 and the report mentioned in Table 1. 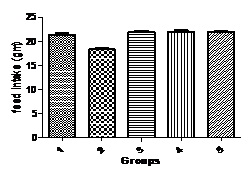 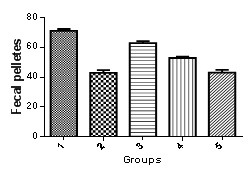 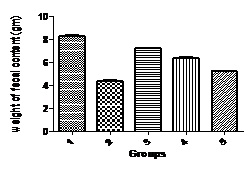 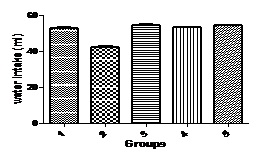 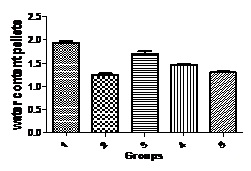 The hydro alcoholic extract of the whole plant showed significant differences from standard treated groups (P<0.05) in constipation activity, when compared to the before treatment at the dose of 200mg/kg was found to be satisfactory.

It can be observed that the constipation activities are comparable to the standard drug of loperamide.