Department of Zoology and Animal Physiology 3, Faculty of Science, University of Buea, Cameroon

ABSTRACT: The antioxidant potential of the aqueous and hydro/ethanolic (ethanol/water) extracts of Crinum jagus were explored considering their total phenolic, flavonoid and proanthocyan contents, 1.1-Diphenyl-2-picrylhydrazyl (DPPH) free radical scavenging activity, ferrous ions chelating ability and nitric oxide radical inhibiting activity. Hydroethanolic extract has exhibited the highest total polyphenols and flavonoids content as well as the highest DPPH inhibition value (56.71 ± 0.05 % at 320 µg/mL) and ferrous ions chelating ability (60.25 ± 0.22 % at 6 mg/mL), when the aqueous extract showed the highest proanthocyanes content, nitric oxide inhibiting activity comparable to that of ethanol/water extract (respectively 64.52 ± 0.03 % and 65.90 ± 0.43 % with 320 µg/mL extract). The IC50 values of the DPPH and the ferrous ions inhibition were respectively 25.21 µg/mL and 4.69 mg/mL; the IC50 value of nitric oxide inhibiting ability was 16.48 µg/mL and 16.14 µg/mL for the aqueous and hydroethanolic extracts respectively. The results indicate that, Crinum jagus might possess effective in vitro antioxidant activity which could be more marked with ethanol/water extract. It exerted its antioxidant activity probably by chelating metals, inhibiting nitric oxide and scavenging DPPH free radicals, through the total polyphenols and proanthocyanes, and partly the flavonoids components

INTRODUCTION: Oxidation is considered to be responsible for the development of accelerated ageing and chronic diseases such as cardiovascular diseases, cancer, atherosclerosis, imflammatory bowel syndrome, metabolic syndrome, diabetes and Alzheimer’s diseases. Many antioxidants are very effective and are used to cure these diseases 1.

The antioxidants have a wide range of biochemical activities including, inhibition of reactive oxygen species generation, direct or indirect scavenging of free radicals, metal chelating ability and alteration of intracellular redox potential 3. Plants present a large source of natural antioxidants that might serve as leads for the development of novel drugs 4. Therefore, to prevent oxidative damage, the search for natural antioxidants, especially of plant origin, has notably increase in recent years 5. Crinum jagus (Amaryllidaceae) is a plant widely used in Africa as antitumor, antiviral, antiparasitary, immunostimulator, and against mental trouble and snake bite 6. According to traditional medicine practitioners in the Western Region of Cameroon, this plant is used against poison and in the treatment of many other diseases. Hence, the present study was carried out to explore the antioxidant potential of aqueous and hydroethanolic extract of Crinum jagus through their total phenolic, flavonoids, and proanthocyans contents, the activities of DPPH free radical scavenging and nitric oxide radical inhibition, the ferrous ion chelating ability.

Plant extracts: Fresh Crinum jagus plants were collected from Batié (West Region of Cameroon) during the month of April. The species was confirmed at the National Herbarium of Yaounde-Cameroon, with the voucher specimens HNC 14049. The whole plant was cleaned, sliced into small pieces, shade dried and powdered.

For each extract, 500 grams of the powder were macerated at room temperature in 3 L of boiling water or ethanol/water (1:4) mixture, for 48 hours (with occasional stirring). After filtration, the water filtrate was dehydrated in a hot air oven; the residue was re-macerated for 48 hours, filtered and dehydrated and the whole dried aqueous extract obtained was weighed (91.4 g). The residue of the ethanol/water mixture, after filtration, was re-macerated for 48 hours and filtered. The 2 filtrates were pooled, concentrated in a rotary evaporator at 45°C and dehydrated to yield 145.8 g of dry dark hydro-ethanolic extract. The hydroethanolic and aqueous extracts were kept in a well-closed container under refrigerated conditions until use.

The TPC amount was assessed using Folin-Ciocalteu reagent 9. The absorbance at 750 nm was measured by UV-visible spectrophotometer (Genway, 6505 UV-visible). Total polyphenols were calculated using standard calibration curve constructed for different concentrations of catechin within range of 0-1000 mg/mL. The results were expressed as milligrams of catechin equivalents per milligrams of dry plant matter (CE mg/mg).

Total flavonoids in the extract were determined using allumine trichlorure method 10. The absorbance was measured at 430 nm. The FC were estimated using standard calibration curve constructed for different concentrations of quercetin within range of 0 - 40 µg/mL. The results were expressed as milligrams of quercetin equivalents per milligrams of dry plant matter (QE mg/mg).

The DPPH (1.1-Diphenyl-2-picrylhydrazyl) free radical scavenging activity of the extracts was measured compared to catechin positive control 12. 0.1 mM DPPH solution (2 mL) was mixed with 20 µL of various concentrations (10, 20, 40, 80, 160, 320 µg/mL) of extract dissolved in 95% methanol. The mixture was incubated for 30 minutes in the dark, absorbance was measured at 517 nm. The positive control (Catechin) and the DPPH inhibition rates (I) were calculated in the following way:

The chelating of the ferrous ions by C. Jagus extracts was estimated using FeCl2 and EDTA positive control 13. Each sample of various concentrations (1, 2, 4, 6, 8 mg/mL) of extracts was mixed with 50 µL of 2 mM FeCl2 solution. The reaction was initiated by the addition of 200 µL of ferrozine (5 mM) and the mixture was shaken vigorously. After 10 minutes incubation, the absorbance was recorded at 562 nm. The percentage of ferrous chelating effect (FCE) was calculated using the following formulae:

The inhibiting activity of C. Jagus extracts on the nitric oxide radical was measured using the sodium nitroprusside and Greiss reagent 14. 2 mL of sodium nitroprusside (10 mM) prepared in phosphate buffered saline (0.5 mM, pH 7.4) was mixed with 0.5 mL of various concentration (10, 20, 40, 80, 160, 320 µg/mL) of each extract dissolved in methanol. The mixture was incubated at 25°C for 15 min, and then 0.5 mL of the incubated solution was mixed with 0.5 mL of Greiss reagent. The nitroprusside was used as positive control. The mixture was incubated at room temperature for 30 min and the absorbance measured at 540 nm. The rate of the nitric oxide radical inhibiting activity (NOia) was calculated with the following formulae:

The experiment was conducted in triplicate and the data were recorded as mean values ± standard error of mean (  ± S.E.M). Statistical Analysis of the data was performed by analysis of variance (ANOVA), using Graph pad Instat Software. The difference between and within various groups was significant with p< 0.05. 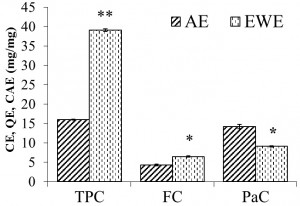 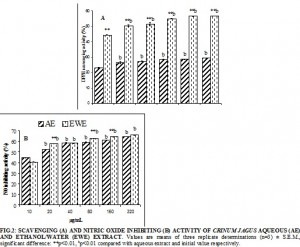 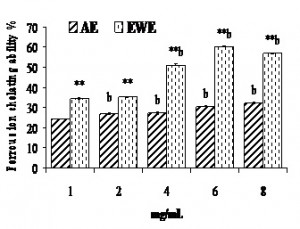 Ethanol/water extract of Crinum jagus recorded considerable amount of total phenolic compounds and flavonoids while aqueous extract registered good amount of proanthocyanes. All those bioactives compounds are known as antioxidants 15.

DPPH radical is widely used to investigate the scavenging potential of extracts, extract fractions and/or pure extract compounds. The ethanol/water extract exhibited important DPPH radical scavenging ability which increased in a dose dependant manner, when compared to aqueous extract. That activity might be due to the higher total polyphenols and flavonoids content. Polyphenolic compounds are known as powerful antioxidants.

Their antioxidant potential could be correlated to the hydrogen radicals donating capacity; furthermore, the number and the configuration of H- donating hydroxyl groups are both important structural features influencing the antioxidant capacity of phenolic compounds 16. In fact, DPPH is a stable free radical that accepts an electron of hydrogen radical to become a stable diamagnetic molecule. Thus, the increase of DPPH inhibiting percentage (reduction of DPPH absorption) is indicative of the capacity of the extracts to scavenge free radical independently of any enzymatic activity 17.

Ferrous ions chelating activity of ethanol/water extract significantly increased. By chelating ferrous ions, this extract might stabilize transition metals in the living systems and inhibits radical generation such as hydroxyl, consequently, inhibits lipid peroxydation process. Oxidation of ferrous ions to ferric ions in the presence of superoxide and hydrogen peroxide generates powerful free radical: hydroxyl radical which is considered to be one of the quick initiators of the lipid peroxidation process 18. The strong chelating activity of ethanol/water extract might be due to his total polyphenols and flavonoids content, known as powerful free metals ions chelating agents.

Both ethanol/water and aqueous extract exhibited good nitric oxide inhibiting activity in a dose dependant manner. This activity could be attributed to the polyphenols, flavonoids and proanthocyanes contents. Fundamentally, nitric oxide is not toxic radical in a first place. Nevertheless it might be dangerous in the presence of a superoxide anion by producing peroxynitrites 19. Nitric oxide inhibition by total polyphenols, flavonoids and proanthocyanes might widely prevent peroxinitrites production, thus prevents lipids and proteins oxidation.

CONCLUSION: By chelating metals, inhibiting nitric oxide and scavenging free radicals considering its hydrogen atom donating ability, Crinum jagus exerted its antioxidant activity. This activity, which may be due to total polyphenols, flavonoids and proanthocyanes contents, is more marked with ethanol/water extract. This antioxidant activity might contribute to the pharmacological effects of this plant and might also justitify the traditional use of the plant in different health problems.