INTRODUCTION: The plant kingdom is a significant part of potential drug an inexhaustible source of bioactive constituents. Preliminary phytochemical screening is a valuable step in the detection of the bioactive compounds present in plants.

Phytochemicals are known to provide protection against insect attacks and plant diseases. Hardwickia binata is a deciduous, moderate to large-sized tree. The bark of saplings almost silvery-white and smooth. Leaves are alternate, bifoliolate resembling Bauhinias. Leaflets are almost kidney-shaped and grayish-green in color, sessile, entire, obliquely ovate and coriaceous.

Flowers are small, yellowish-green in an axillary and terminal lax panicled raceme. The fruit is a flat, samaroid pod con­taining one seed near the apex. Seed is flat; straight to slightly bended pointed at one end and rounded at the other, with a fairly hard testa 1, 2. Previous researchers worked out tannins from the bark are used to produce medicines for the treatment of diarrhea, worms, indigestion and leprosy and also produce an appetizer 3. The leaves, pods and bark contain tannins 4.

Bark used for gums and resins 5. The leaves are used for fodder and manure 6. The leaves extract showed activity against both gram-positive and gram-negative bacteria and fungi. Bioactive substances showed antimicrobial agents for the treatment of various bacterial and fungal infections including gonorrhea, pneumonia, eye infections and mycotic infections and tannins have been traditionally used for protection of catarrh, wounds, hemorrhoids, diarrhea and antidote in heavy metal poisoning. Flavonoids possess anti-inflammatory, anti-allergic, antithrombotic, anti-microbial and vasoprotective effects 7. The leaves are used for headache and treatment of constipation 1, 7. The leaves had crude protein 8, 9. The bark and leaf used as a source of medicine for rheumatism 10. In H. binata an investigation was made of the antioxidants and their protective mechanism in chloroplasts against SO2 pollution 11. The phenolic compounds' role in giving protection to the plants against deleterious effects of UV rays and certain phytopathogenic microorganisms. The protein, phenols and flavonoids can be used as chemical markers in taxonomic studies 12. Phytochemical analysis studies the presence of active compounds. Hence, the present investigation was undertaken to work out preliminary phytochemical studies, FTIR and GC-MS analysis with the aim to report the functional components of leaves, seed and husk of Hardwickia binata Roxb.

Collection and Identification of Plant Material: The plant materials such as leaves and pods of Hardwickia binata were collected from different localities viz. Sangali (Tal-Atpadi, Swatantrapur vasahat), Dhule (tal-dhule, borvihir Area) and Jalgaon (Tal-Muktainagar, Muktainagar forest) Districts in April 2015. Taxonomic identification of the plant was done and herbarium was deposited to the Department of Botany, Shivaji University, Kolhapur.

Preparation of Extracts: The collected materials (leaves and pods) of Hardwickia binata were shade dried and coarsely powdered in a mixer grinder, sieved and used for extraction. The leaves, seed and husk powder were extracted separately with petroleum ether, chloroform, ethyl acetate, acetone, methanol, ethanol, and distilled water in the increasing order of their polarity by using Soxhlet apparatus. The extract was decanted, filtered through Whatman No.1 filter paper, concentrated and preserved in airtight bottles until further use.

FTIR Analysis: The Fourier Transform Infrared (FTIR) spectroscopy analysis was performed to know the occurrence of chemical bonds or functional groups present in the crude powder of leaves, seed, and husk of Hardwickia binata. The peak values of FTIR were recorded and their corresponding functional groups were identified.

GC-MS Analysis: The chemical composition of ethanolic extracts of leaves, seed, and husk of Hardwickia binata was determined by gas chromatography-mass spectrometry (GC-MS) as it provides enhanced sample identification, higher sensitivity, an increased range of analyzable samples and faster results. This helps to constitute the chemical picture of plant extracts and by which the complex mixtures can be resolved into individual components.

Alkaloids were found to be absent in petroleum ether, chloroform, and ethanolic leaves extracts of H. binata 1. A similar type of analysis has been documented in ethanolic leaves extracts of H. binata but alkaloids and anthraquinones were not present 7. The phytochemical study of leaves and seeds of Bauhinia racemosa, Bauhinia purpurea and Hardwickia binata in ethanolic extracts are the presence of phenols, saponins, flavonoids, glycosides and tannins while alkaloids were not detected 12.

In present work confirmed the previous reports. The majorities of compounds are present in acetone, methanol, ethanol, and distilled water and glycosides, lipids and mucilage are present in all extracts.

FTIR Analysis: The results revealed in the crude powder of leaves, seed and husk of H. binata gave the characteristic absorption peaks as represented in Fig. 1 and Table 2. The crude powder of H. binata FTIR confirmed the presence of alcohol, phenols, amines, amides, carboxylic acids, aromatics, alkenes, alkanes, aliphatic amines, esters, ethers, alkynes, alkyl halides in leaves, seed and husk; saturated aliphatic found in only seed and aldehydes only in husk. FTIR spectra of untreated and alkali-treated Hardwickia binata fibers were determined the chemical composition of cellulose, hemicellulose and lignin 17. The methanolic extracts of Myristica dyctyloides fruit have FTIR spectra showed the presence of functional group in all the extracts which have medicinal properties 18. 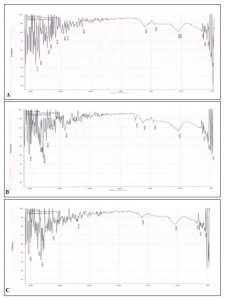 GC-MS Analysis: GC-MS analysis confirmed the results as shown in Table 3 and Fig. 2. It showed the presence of 10 major groups. 1, 1-diethoxy-ethane, tetradecamethyl- cycloheptasiloxane, linoleic acid, ethyl ester, ethyl oleate in leaves, seed and husk; hexadecanoic acid and ethyl ester found in only leaves and seed; 1-methyl-4-(1-methylethyl)-Benzene, 2-methyl-5-(1-methylethyl)-Phenol, 3, 7, 11, 15-Tetramethyl-2-hexadecen-1-o1 are found in only leaves; dodecamethyl-cyclohexasiloxane only in seed; thymol only in husk is the pharmaceutically important. The different biochemical compounds identified by GC-MS show various biological activities shown in Table 4. 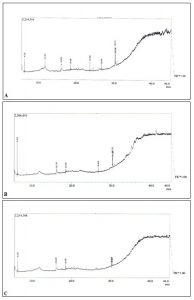 CONCLUSION: The present investigation of H. binata revealed the presence of many phytochemical components as a rich source of pharmaceutically and biologically important bioactive compounds that may build up new medicines. FTIR spectra showed the various functional groups may serve as a new potential source of medicines with more efficiency. 10 compounds that have been screened by a GC-MS it will help to therapeutic activity. Various studies confirmed that phytochemicals contribute medicinal properties that are of great importance as a good source of new useful drugs. The quantitative analysis of these phytocomponents will be an interesting area for further study.

ACKNOWLEDGEMENT: Authors are thankful to the Principal, Yashavantrao Chavan Institute of Science, Satara for providing the facilities for research work. The authors also thank the Head, Department of Botany for their support and cooperation during the research work.