ABSTRACT: Delonix elata bark was collected, authenticated, dried, coarse-finely powdered and extracted using 70% alcohol and subjected for preliminary phytochemical screening. Total phenolic and flavonoidal contents were determined using UV/ visible spectrophotometer. In addition the silica column chromatographic separation was carried out to separate the phytochemicals of D. elata bark extract. Preliminary phytochemical screening showed positive tests for saponins, flavonoids, tannins and carbohydrates in the alcoholic extract of Delonix elata bark. When the extract was analyzed quantitatively by UV/ visible spectrophotometer, 75 mg/gm of gallic acid equivalent total phenolics and 57.4 mg/gm of rutin equivalent flavonoids were observed.Two phenolic compounds, caffeic acid and apigenin, were isolated and characterized by spectral analysis from the alcoholic extract of the Delonix elata bark. Moreover, HPLC method was employed to analyze the isolated phytoconstituents i.e. caffeic acid and apigenin present in the fraction of alcoholic extract of D. elata bark which showed the similar Rt of separated constituents. The present study reveals the presence of flavonoids in D. elata bark as evidenced by the phytochemical screening, and identification of caffeic acid and apigenin.

INTRODUCTION:Delonix elata is commonly known as white gulmohur belonging to the family of Fabaceae and subfamily Caesalpinoidae 1. Delonix elata is not a classical Ayurvedic drug, but found included in Shodhala Nighantu under the Sanskrit name of ‘-Siddeshwara-’ during 12th century AD 2.

The medical usefulness of the tree is acknowledged by people living in the villages who take a decoction of the leaves and barks to get relief from rheumatic problems like pain and stiffness of the joints, especially affecting the knees 3, 4.

It was observed that local people and Siddha practitioners in Tamil Nadu, India use the Delonix elata bark and leaves for treating inflammation and arthritic conditions. The benefits may be attributed to the chemical constituents like β-sitosterol, quercetin, lupelol, lysine, alanine, valine, tyrosine and rhamnose are which reported from Delonix regia. Quercetin 3-O-rhamnoglucoside and Quercetin-3O-galactoside are also reported 3.

Plant Material: The Barks of the plant Delonix elata were obtained from the outskirts of Tiruchengode, Namakkal Dt. Tamilnadu, India. It was identified and authenticated by Prof. K. P. Sreenath (Taxonomist) Bangalore University, Bangalore. A voucher specimen has been prepared and deposited at the Department of Pharmacognosy, PES College of Pharmacy, Bangalore. The collected bark was dried in shade, crushed to coarse-fine powder and used for the studies.

Chemicals: All the solvents and chemicals used for the studies are laboratory grade procured from SD fine chemicals. Gallic acid and Rutin were procured as gift samples from Himalaya drug company, Bangalore. Folin- Ciocalteu reagent was obtained from Merck (India).

Preparation of Extract: The dried powdered bark (1000g) was subjected to continuous hot extraction using 70% v/v methanol in distilled water for 8 h. The extract was filtered, concentrated and the solvent was removed by rotary flash evaporator to get 98g extract. The extract was dried over a desiccator and used for the study.

Determination of total poly phenol content: Qualitative chemical tests revealed that the alcoholic extract of D. elata showed prominent results for phenolics and tannins. Hence, estimation of polyphenol content was performed. Total phenolic content of the extract was determined using Folin-Ciocalteu reagent method with Gallic acid as a standard.  The alcoholic extract (1000 µg/ ml) was taken in a 50 ml volumetric flask with 45 ml distilled water and 1 ml Folin-Ciocalteu reagent and the flask was shaken thoroughly. After 3 min, 3 ml solution 2% Na2CO3 was added and the mixture was allowed to stand for 2 h with intermittent shaking. Absorbance was measured at 760 nm using UV/ visible spectrophotometer.

The procedure was repeated for all the standard Gallic acid concentrations (20, 40, 60, 80 and 100 µg) and standard curve derived to obtain linear regression equation 10, 11.

Total flavonoids assay: The total flavonoid content of Delonix elata bark extract was measured with Aluminum chloride assay. An aliquot of 0.2, 0.4, 0.6, 0.8 and 1.0 ml of standard Rutin and 2.5 ml of samples were separately transferred to a 10 ml volumetric flask and 4 ml of distilled water was added. All the flasks were added with 0.3 ml of 5% NaNO2 and allowed to stand for 5 min. A 0.3 ml of AlCl3 was added followed by 2 ml of 1 M NaOH and the total volume was made up to 10 ml with distilled water. The solution was mixed well and the absorbance was measured against a reagent blank at 510 nm with UV/ visible spectrophotometer 11.

Silica gel (100-200 mesh size) was used as adsorbent and the column was packed with ethyl acetate as initial solvent. Elution was carried out by increasing the polarity with methanol, which yielded a yellow colored compound (40 mg) with the elution ratio of 65:35, v/v ethyl acetate in methanol, named as DECP1.

Column chromatography-3 (CC-3): Similarly, the collective fraction (8.73g), as described above, was subjected using silica (100-200 mesh size) column chromatography with ethyl acetate as initial mobile phase. Elution was carried out by increasing the polarity with methanol, which yielded a yellow colored compound (35 mg) with the elution ratio of 10: 90, v/v of ethyl acetate in methanol, named as DECP2.

HPLC analysis: Isolated compounds i.e. caffeic acid (DECP1) and apigenin (DECP2) and the silica column chromatography fractions i.e. CC-2 and CC-3 were analyzed on a Shimadzu HPLC system using C18 column using standard Apigenin and caffeic acid authentic markers. HPLC column was 5 micron with the dimension of 4.6 x 250 mm length. Mobile phase A was Buffer (consisting of 0.14g KH2PO4 with 0.5 ml H3PO4in HPLC grade water QS to 1000 ml) and Mobile phase B was Acetonitrile. Gradient elution was performed with 95: 5, v/v to 20: 80 v/v of A: B. in 30 min,   later 95: 5, v/v till 40 min. Samples in the volume of 20 µl was injected and analyzed at 360 nm wavelength. The chromatograms are shown in Fig. 1-5. 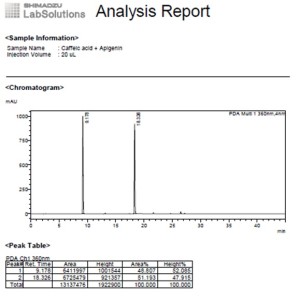 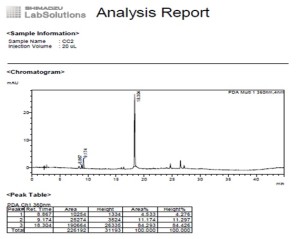 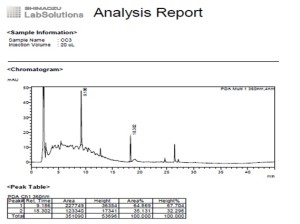 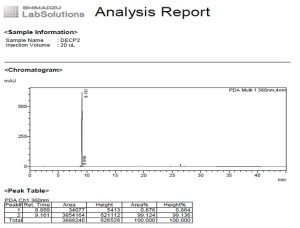 HPLC Analysis: HPLC studies showed that standard caffeic acid and apigenin were eluted at retention time (Rt) of 18.32 min and 9.17 min respectively. The isolated compounds i.e. DECP 1 (caffeic acid) showed Rt of 18.30 while DECP2 (apigenin) eluted out at Rt 9.16. The CC-2 loaded fraction exhibited prominent major peaks at Rt 18.30 with some other minor impurities. Similarly CC-3 loaded fraction showed peak at both Rt 9.16 and 18.30 along with some impurities (Figure 2-6). The present work, therefore, suggests that the caffeic acid and apigenin are present in sufficient concentrations to be determined by HPLC method described above.

EI-MS: a molecular ion peak at m/z = 271 which corresponds to molecular formula C15H10O5 of apigenin.

FIGURE 1: CHEMICAL STRUCTURES OF A. APIGENIN AND B. CAFFEIC ACID.

CONCLUSION: An equivalent 75 mg/gm of the total polyphenol and 57.4 mg/gm of the flavonoid content was found in the alcoholic extract of the D. elata bark extract. Apigenin and caffeic acid were isolated and characterized for the first time from D. elata bark. These constituents are found in Delonix elata bark where comparable to other plant-based sources.

Our work hence, confirms and quantitates the reliable sources of Apigenin and Caffeic acids from Delonix elata bark which will be helpful for future studies in the extraction of these pharmacologically active compounds.