ABSTRACT: Curcuma rotunda, locally known as temu kunci, has been reported containing flavonoids in its rhizome that exhibit antioxidant activity. This study aimed to isolate secondary metabolites from the polar fraction of acetone extract from C. rotunda rhizome and to determine their antioxidant activities. The secondary metabolites were isolated using various chromatography methods yielded two fractions. Identification of both isolated fractions using LC-MS showed a dominant peak on the retention time of 13.30 and 11.30 minutes suspected pinostrobin (chalcone) and pinocembrin (flavanone), respectively. Antioxidant activity towards DPPH of crude extract showed moderate activity with IC50 of 125.75 ppm. However, the antioxidant activities from both isolated fractions could not be determined due to less than 50% of its inhibition percentage. It can be suggested that other specific phenolic compounds in C. rotunda corresponding to its radical scavenging activity.

INTRODUCTION: Curcuma rotunda (Zingiberaceae) is widely used as a spice in some Asian countries such as Indonesia, Malaysia, and Thailand. Commonly known as temukunci in Indonesia, C. rotunda can be used to cure diseases such as stomach pain and discomfort, viral and bacterial infection, and diuretic agent, traditionally 1. It commonly used by Indonesian women after child birth under the traditional name ‘jamu.’ The rhizomes of this plant are effective against inflammatory diseases such as wounds, swellings, and tooth and gum diseases 2.

Several medicinal properties such as antimicrobial, antibacterial, antioxidant, antiulcer, antimutagenic, and anticancer can be attributed to different compounds isolated from different parts of this plant 3.

Chemical studies of C. rotundarhizomereported several monoterpenoids, i.e. geranial and neral; chalcones, i.e. boesen bergin A, boesen bergin B, cardamonin, pinostrobin, panduratin A, and dihydro methoxy chalcone; and flavanones, i.e. pinocembrin, alpinetin, and 5-hydroxy-7-methoxy-flavanone 4-6. Chalcone and flavanone derivatives were suggested to play an important role as antioxidant agents. Bioassay-guided isolation of the active compounds from CH2Cl2: MeOH 1:1 of C. rotunda extract lead to the isolation of panduratin A,4-hydroxy-panduratin A, 5-hydroxy-7-methoxy-flavanone, 5, 7- dihydroxyflavanone, 2′, 6′-dihydroxy-4′-methoxychalcone, and 2′, 4′-dihydro-xy-6′-methoxychalcone. Among them, panduratin A and 4-hydroxypanduratin A might also contribute on antioxidant activity 7. 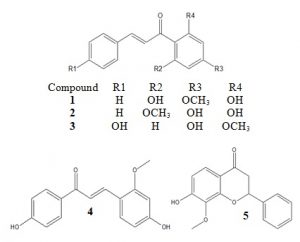 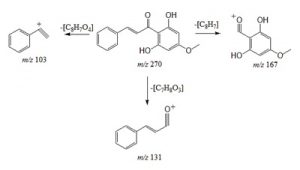 The result scavenging effect to the DPPH free radical of the acetone extract of Indonesian C. rotunda rhizome, ascorbic acid, Fr. F2, and F3 showed that none of the fractions was found to be more active than ascorbic acid (IC50 = 4.62 ppm). The acetone extract exhibited a moderate antioxidant activity with IC50 value of 125.75 ppm. However, this value was greater than Pratiwi 16 which reported the IC50 value of 100.24 μg/mL. Fr. F2 and F3 could not be determined for their antioxidant activity because their inhibition value was less than 50%. 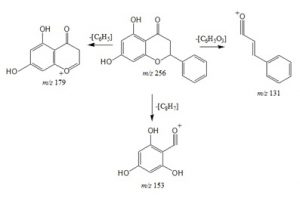 According to Tanjung et al., 12 compounds 2 showed the IC50 value of 21.54 μg/mL against DPPH. The difference was presumably due to several factors, such as plant genetic factors, growing areas, environmental stresses such as heavy metals or ultraviolet exposure, and physical factors such as temperature, humidity, and climate 16. Phenolic and flavonoid in all accessions of C. rotunda were not responsible for their antioxidant activity, or alternatively, that is radical scavenging activity was due to specific phenol or flavonoid compounds. In other medicinal plants, the results of that study are in agreement with other reports 17.

CONCLUSION: The secondary metabolites had been isolated from acetone extract of Indonesian C. rotunda rhizomes. Separation and identification used various chromatography methods and LC-MS, respectively, showed a dominant peak on the retention time of 13.30 and 11.30 min suspected pinostrobin (chalcone) and pinocembrin (flavanone), respectively. Antioxidant activity towards DPPH of crude extract showed moderate activity with IC50 of 125.75 ppm. However, the antioxidant activities from both isolated fractions could not be determined due to less than 50% of its inhibition percentage.

ACKNOWLEDGEMENT: The authors are grateful to Department of Chemistry, Faculty of Mathematics and Sciences, Bogor Agriculture University for financial support. We also thank to Department of Chemistry, the Faculty of Mathematics and Sciences, Bandung Institute of Technology for providing laboratory facilities, specially 1D and 2D NMR.