ABSTRACT: Jasminum multiflorum belongs to the Oleaceae family. It is used as a traditional medicine from ancient times. It is a large evergreen twinner shrub found throughout India. Present study reports the phytochemical properties which have been carried out on the leaves extract using ethanol, methanol, ethyl acetate, acetone and n-hexane. The phytochemicals analysis show the presence of Phenols, Saponins, Terpenoids etc; TLC has been carried out on different extracts of leaves of Jasminum multiflorum, which have shown different Rf values. The presences of phenols, terpenoids and saponins based phytochemicals are reported.

INTRODUCTION: Plants have always been a rich source of natural compounds. In the past traditional people depend on local flora and fauna for their survival. They use leaves, roots, and fruits as traditional medicine. The metabolites discovered in medicinal plants may avoid the side effects of synthetic drugs because they accumulate within living cells.

Natural products are phytochemicals that occur naturally in plants. These phytochemicals are responsible for colour and organoleptic properties, such as the deep purple of blueberries and smell of garlic. The term is generally used to refer to those chemicals that may have biological significance but are not established as essential nutrients 1.

Scientists estimate that there may be as many as 10,000 different phytochemicals  having the potential to affect diseases such as cancer, stroke or metabolic syndrome. These phytochemicals are abundant in fruits, vegetables and herbs.

Jasminum multiflorum is a species of Jasmine in the family Oleaceae and is commonly known as winter jasmine, Indian jasmine, Downy jasmine (English), Kundah or Magha mallika (Sanskrit), and Kundphul (Hindi) and Kunda (Marathi).

It is an evergreen, twinner shrub with young branches clothed with velvety pubescence; leaves are simple, ovate, opposite, base rounded or chordate. Flowers are fragrant seen in terminal and axillary cymes. It is an ornamental plant which is primarily cultivated for decoration, adornment to enhance the appearance of houses, gardens etc 2, 3, 4. It is also a source of fragrant oil for perfume making and cosmetics 5, 6.  Classification of the plant is given in table 1.

However, this plant species have found use in medicine and still very little literature exist on its chemical biological activities 2, 7.

The whole plant is having medicinal properties. Dried leaves are good for indolent ulcers 8. Secoiridoid lactones i.e. Jasmolactones A, B, C, D are also isolated which contains a novel bicyclic2-oxo-oxepano[4,5-C]pyran ring from ariel parts 9 and secoiridoid glycosides, multifloroside, multiroside and 10-hydroxyoleoside-11 methyl ester have been isolated from J. multiflorum and these secoiridoid glycosides and lactones were found to have coronary dialating and cardiotropic activities 10.

Plant material: The leaves of Jasminum multiflorumwere collected from Nagpur, Maharashtra, washed properly and shade dried. The dried leaves powdered and used for the extraction purpose.

Extract preparation: The dried leaves powder (25 gm.) was extracted in Soxhlet apparatus by using 25 ml of different solvents having different polarities like Ethanol, Methanol, Ethyl acetate, Acetone and n-Hexane for 48 hours and then concentrated by evaporation. These prepared extracts were used for phytochemicals analysis.

Phytochemicals investigation: Number of phyto-chemicals tests performed using obtained extracts. These procedures are already reported by number of workers and used without any modification 11, 12, 15, 16. The name of phytochemicals and their investigation methods are as follows:

The presences of various phytochemicals in prepared extracts are reported in table 2.

TLC analysis of leaves extracts of Jasminum multiflorum: The Thin layer chromatography (TLC) performed for all five extracts on analytical plates over silica gel-G of 0.2 mm thickness. These plates were developed in three different mobile phases as described in literatures and their composition is  listed in Table 3 13, 14.

The spots were visualized by exposing plates to Iodine vapour. Figure 1 shows the TLC photographs and table 4 shows the calculated Rfvalues for all studied TLC systems 17, 18, 19, 20.

TABLE 3: MOBILE PHASES AND THEIR COMPOSITIONS 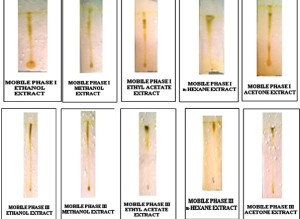 RESULTS: Leaves extracts of Jasminum multiflorum were prepared in n-hexane, acetone, ethyl acetate methanol and ethanol solvents. Numbers of phytochemical tests were performed and their results are reported in Table 2. It is reported that different leaves extract shows presence of Phenols, Terpenoids and Saponins as a main phytochemicals.

The presence of different phytochemicals in leaves extract is also suggested by the TLC analysis. The Rfvalues in three different mobile phases for various extracts are reported in Table 4. Figure 1 shows photographs of the studied TLC slides.

DISCUSSION: Different phytochemicals tests performed on the extracts of Jasminum multiflorum leaves show the presence of phenols, terpenoids and saponins. Phenols are reported in number of extracts viz ethanol, methanol and ethyl acetate. Terpenoids reported in ethyl acetate and acetone extracts. Saponins are reported only in methanol extract. From the results, it is concluded that phenols based phytochemicals are present in abundance in the Jasminum multiflorum leaves.

TLC analysis shows well separation of the compounds and also suggests the presence of different kinds of phytochemicals in leaves extract.

Acetone extract shows presence of terpenoids only whereas n-hexane extract reported no sign of phytochemicals. These findings on leaves of Jasminum multiflorum show presence of phenols in abundance, terpenoids in moderate amount and saponins in fewer amounts.

Jasminum multiflorum leaves can be analyzed further to find out the possibilities of using it as herbal medicine on a scientific basis.