PHYTOCONSTITUENTS OF CYPERUS ROTUNDUS L. THAT ATTRIBUTE TO ITS MEDICINAL VALUE AND ANTIOXIDANT PROPERTY

PHYTOCONSTITUENTS OF CYPERUS ROTUNDUS L. THAT ATTRIBUTE TO ITS MEDICINAL VALUE AND ANTIOXIDANT PROPERTY

Cyperus rotundus L. is a medicinal herb widely used in the ancient Ayurvedic and Chinese traditional medicine. In the earlier investigations it has been primarily studied for its antioxidant properties. The present study explores the various phytochemicals present in the plant so as to substantiate its antioxidant property and also unravels the several phytoconstituents that contribute to its various medicinal properties.

INTRODUCTION: The medical uses of Cyperus rotundus L. have been exploited for thousands of years, especially in Chinese traditional medicine. The parts of Cyperusrotundus used are its rhizome, leaves, seeds and oil. It is a perennial grass-like herb growing up to 60 cm high with underground tubers, widespread through the warmer parts of the world. Ancient sage of India have considered it to be an appetizer, digestant, anti-diarrhoeal, anti-saturative, thirst relieving, anti-pruritic, reducing and lactodepurant herb. It is also well known for its diaphoretic properties.

Some of its phytochemical and pesticidal properties have been reported earlier 1. Its in-vitro antioxidant activity and total polyphenolic content analysed earlier suggest that the plant could be used as a potential source of natural antioxidant 2. Cyperus oil from Iraqi C. rotundus has been found to possess antibacterial activity 3. This study elaborates the phytochemical constituents of the plant so as to ascertain the chemical constituents of the plant that attribute to its free radical scavenging property and various medicinal uses.

MATERIALS AND METHODS: The whole plants of C. rotundusL. at flowering stage were collected from CholayilVelagapuram farm, Chennai, India. They were dried in shade. A herbarium specimen of Cyperusrotundus L. (F. No: 3251) was authenticated and deposited at the Herbarium, Sri Paramakalyani Center for Environmental Sciences Herbarium (SPKCESH), Alwarkurichi, Tamil Nadu, India.

Preparation of the Methanolic Extract: The dried and powdered whole plant parts (which includes roots, rhizomes, flowers and leaves) of C. rotundusL. (500g) were incubated in Hexane, (1:3 ratio)for 48 hrs in a shaker. The extract was collected using Whatman No. 1 filter paper and the above procedure was repeated.

The hexane treated residual mixture was extracted with Methanol in 1:4 ratios and collected using Whatman No. 1 filter paper and evaporated below 40°C. The above procedure was repeated, and the extract was used for further analysis. Phytochemical analysis was done to determine the chemical constituents of the plant.

The percentage inhibition of DPPH radical by the sample was calculated using the following formula:

DPPH is a stable free radical with purple colour (absorbed at 517nm). If free radicals have been scavenged, DPPH would degenerate to yellow colour[4].

Preparation of sample for DPPH:

The extracts were dissolved in methanol in the concentration of 1mg/ml which was then used to determine its antioxidant activity.

RESULTS AND DISCUSSION: The yield from the Crude extract of C. rotundusis as shown in Table 1.

Phytochemical analysis of the methanolic extract of C. rotundusis as shown in Table 2 and Figure 1.

TABLE 2: PHYTOCHEMICAL ANALYSIS OF THE METHANOLIC EXTRACT OF C. ROTUNDUS 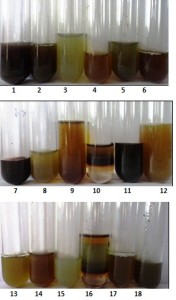 FIGURE 1: PHYTOCHEMICAL ANALYSIS OF THE METHANOLIC EXTRACT OF C. ROTUNDUS

The presence of tannins, saponin, flavonoids, alkaloids, Quinones, terpenoids and phenols were found to be significant.

Historically, tannic acid was used along with activated charcoal and magnesium oxide in the “universal antidote,” for poisoning. Tannins are popular for their protective effect on skin. They are also known to be anti-HIV 5, antibacterial 6 and antiparasitic 7. The antipruritic activity of Cyperusrotundus can be attributed to the presence of tannins.

Saponins are surface active agents and can lyse erythrocytes in vivo. But its absorption after oral administration is considerably low 8. They are used as adjuvants in vaccines 9.

Major flavonoids that show well categorized structures and well defined structure function-relationships areflavans, flavanones, flavones, flavanonols, flavonols, catechins, anthocyanidins and isoflavone. The biological properties of flavonoids include antioxidant, anti-inflamatory, antitumoral, antiviral and anti-bacterial, as well as a direct cytoprotective effect on coronary and vascular systems, the pancreas and the liver 10.

Pure, isolated plant alkaloids and their synthetic derivatives are used as basic medicinal agents for their analgesic, antispasmodiac and bactericidal effects.

Quinones are widely known as anti-microbial and anti-carcinogenic agents 11. Quinone derivatives such as naphthoquinones, benzoquinines and anthraquinones are known for their various anti-infective properties. Vitamin K is a complex naphthoquinone with anti-hemorrhagic activity.

A number of terpenoids exhibit cytotoxicity against a variety of tumor cells. They are suggested to be potential chemopreventive and therapeutic agents in liver cancer 12.

Natural phenolic compounds play an important role in cancer prevention and treatment. Various bioactivities of phenolic compounds are responsible for their chemopreventive properties like antioxidant, anti-carcinogenic or anti-mutagenic and anti-inflammatory effects. They induce apoptosis by arresting cell cycle, regulating carcinogen metabolism and ontogenesis expression, inhibiting DNA binding and cell adhesion, migration, proliferation or differentiation, and blocking signaling pathways 13.  The presence of phenols is considered to be potentially toxic to the growth and development of pathogens.

The test for carbohydrates, betacyanins, coumarins, proteins and steroids also yielded a positive result, while the tests for glycosides, triterpenoids, acids, phlobatanins and anthraquinones gave a negative result.

Betacyanins are supposed to be anti-cancer agents. In betacyanins, glycosylation reduced the antioxidant activity while acylation generally improved the activity 14.

Phytosterols lower cholesterol levels by competing with cholesterol for absorption in the intestine. Considerable emerging evidence supports the inhibitory actions of phytosterols on lung, stomach, as well as ovarian and breast cancer. Phytosterols seem to act through multiple mechanisms of action, including inhibition of carcinogen production, cancer-cell growth, angiogenesis, invasion and metastasis, and through the promotion of apoptosis of cancerous cells 15.

Coumarins are strong antibacterial agents. Other activities reported for coumarins includes anti-HIV, anti-tumor, anti-hypertension, anti-arrhythmia, anti-inflammatory, anti-osteoporosis, antiseptic, and analgesic It is also used in the treatment of asthma and lymphedema 16.

The antioxidant activity of the extract was also found to be significant and is shown in Table 3 and Figure 2. 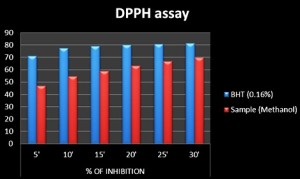 This antioxidant potential of Cyperusrotunduscould be attributed to the presence of flavonoids, alkaloids, betacyanins, quinones, terpenoids, and phenols. This could be the reason for its use as a natural immune modulator.

These findings enrich our knowledge of the chemical constituents that are responsible for the medicinal uses of the plant and the antioxidant potential of C. rotundus L.