ABSTRACT: Herb is an indispensable food ingredient for the tribal people of Arunachal Pradesh. They practices innumerable traditional food recipe to maintain good health. Spilenthes oleracea L. is one of such medicinal food plant used by tribal people of Arunachal Pradesh. The study was carried out to find out the phytoconstituents of S. oleracea shoot. Ethanolic extract of the sample was subjected to GC-MS to know the Phytoconstituents of this herb and correlate the phytoconstituents and health claim thereof if any. This study reports the presence of 48 phytocompounds and a total of 10 compounds identified from this sample have been reported to show painkiller effect that complements the traditional knowledge on this herb among the tribal people of the study site and scientific evidence. Sesquiterpene, Polyenoic fatty acid, Steroidal, Palmitic acid ethyl ester and Hydrocarbon are the major group of compound found from the sample. Present work advances S. oleracea as a medicinal food herb.

INTRODUCTION: The environment around has been influencing man’s culture since the dawn of time and he started to make use of available resources around him from antiquity. Man must have learnt the use of plant on subject to the hungry, accident, injury, bite of insects or serpent or death of fellow men and made man’s instinct by luck or observation to get help from available surroundings 1. Therefore, Knowledge on the therapeutic properties of plant is predated recorded history 2. There are several historical indications that claim the ancient use of natural remedies to resolve primary health problems in different part of the world in different forms like rhymes, folk, Songs, symbols, inscriptions, paintings, Cueniform tablet, Ayurvedic texts, Papyrus scroll, Herbals, etc. 1, 2. Food without Dal, Wheat, Potato, Oil and Spice is the characteristic features of the indigenous food system in Arunachal Pradesh 3. Let food be your medicine, once said Hippocrates (c. 460 – c. 370 BC) over 2500 years’ ago 4. Such medicinal food concepts and practice is still observable in the indigenous food systems among indigenous people in various pockets of the world in general and Arunachal Pradesh in particular 3. Further, in the word of Etkin and Ross 5, wild plants that are retained in local food cultures are inseparable from traditional therapeutic systems and Pieroni and Price 6 remarked that it is difficult to draw a line between food and medicine; food may be medicine and medicine may be food. Marriot Bernadette 7 also marked that links of diet and health are no longer questioned. Arunachal Pradesh, the "land of the dawn-lit mountains", which is also known as the “Paradise of the Botanists in India is also known for her rich biodiversity 7, 8. This remote state was first Botanized by Griffith   in 1836 only. The state harbors thousands of plants with equal numbers of traditional uses. The indigenous people use many plants as food as well as medicine also but these traditional practices are yet to be validated scientifically. The traditionally used medicinal food plants may contain various useful compounds if studied scientifically and may become boon for the mankind on scientific intervention. Hence Spilenthes oleracea has been taken up in the present study as this herb is used as vegetables, appetizer as well as to relief toothache in the studied area.

Numerable workers have carried out research on different aspects of Spilanthes species. The genus of Spilanthes is composed of about 60 species, distributed in the tropics and the subtropics. These plants are an annual herb that grows up to 60 cm. The plant has yellowish red head flowers. Spilanthes species as an Ornamed plant with ornamental and medicinal value in peninsular India 9. Traditionally this herb is used in fish poisoning, gastric problem and in blood clothing among the Monpas of Arunachal Pradesh 10.  Alkylamides has also been isolated from another related Spilathes species collected from Taiwan 11. Pharmacological works on Spilathes acmella is also well reviewed 12. Recently spilanthol from Acmella olerceae has been reported to be effective as diuretic in Urine concentration mechanism to lower the intracellular level of cAMP impairing NKCC2 phosphorylation and waerchannel AQP2 membrane expression in mouse kidney 13. Spilanthes acmella has also been reported to useful in the treatment of rheumatoid arthritis, gastro intestinal disturbances, treatment of malarial and fungal infections 14, 15. It is more or less evident that Spilanthes species are useful in the treatment of toothache but not much work on the phytoconstituents of the selected species has been done particularly from Arunachal Pradesh.With above backdrops, the shoot of Spilathes oleracea has been studied to know the phyto-constituents of this plant by using GC-MS. Because, Gas Chromatography–Mass Spectrometry (GC-MS) is a hyphenated analytical technique that combines the separation properties of gas-liquid chromatography with the detection feature of mass spectrometry to identify different substances within a test sample 16. Further, Gas chromatography-mass spectrometry (GC-MS) is the most commonly used technique for the analysis of lipo-soluble constituents, especially volatile / semi-volatile compounds, and their metabolites in biological fluids due to its high resolution, selectivity and sensitivity 17.

Preparation of Extract: The sample was shade dried and pulverized to powder using a mechanical grinder. 600g of plant powder was soaked in ethanol for 72 hours with intermittent shaking then filtered through Whatmann No. 41 filter paper and concentrated by using water bath.

GC-MS Analysis: Gas-Chromatography Mass Specrometry (GC-MS) analysis of the ethanol extracts of Croton tiglium carried out in Shimadzu GCMS-QP-2010 plus system. RTx-5 Sil MS column (30 m X 0.25 mm id X 0.25 film thickness) was used for the analysis. The operating conditions of the column were as follows:

The identification of compounds was performed by comparing their mass spectra with data from NIST 11 (National Institute of Standards and Technology, US) and WILEY 8.

Identification of Phytocompounds: The identification of compounds was performed by comparing their mass spectra with data from NIST 11 (National Institute of Standards and Technology, US) and WILEY 8.

RESULTS AND DISCUSSION: The ethanolic extract GCMS chromatogram of S. oleracea L. (Fig. 1) shows 48 peaks indicating the presence of at least forty eight phytochemical constituents about 15 percent of the phytoconstituents are essential oils. On comparison of the mass spectra of the constituents with the NIST 11 library and Willey 8 library, the forty eight phytocompounds were characterized and identified as given in Table 1. Compounds related to the traditional uses i.e. anaesthetic and corresponding reported biological activities are given in Fig. 2, 3, 4 and 5. Selected twenty compounds that have reported to be biologically active are given in Table 2. 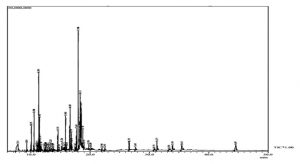 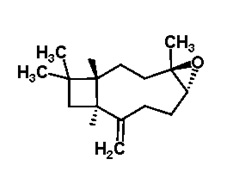 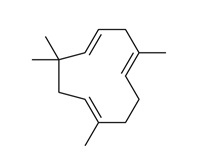 CONCLUSION: From this work, it could be concluded that S. oleracea shoot contains various useful phytocompounds for numbers of health problems like inflammation, cancer, diabetic and antioxidation, antbacterial etc., Out of forty eight compounds, a total of ten compounds identified from this sample has been reported to show painkiller effect by various workers referred in table number (2) that complements the traditional knowledge on this herb among the tribal people of the study site and scientific evidence. In addition, few compounds that act as an antioxidants and anti cancers are also present in this herb. The study felt the need of further scientific studies that could lead in the discovery of potent useful medicines for various health problems and anaesthetic in particular.

CONFLICT OF INTEREST: The author doesn’t declare any conflict of interest.