ABSTRACT: Novel drug delivery system is a novel approach to drug delivery that addresses the limitations of the traditional drug delivery systems. Our country has a vast knowledge base of Ayurveda whose potential is only being realized in the recent years.The effectiveness of any herbal medication is dependent on the delivery of effective level of the therapeutically active compound. Severe limitation exists in their bioavailability when administered orally or topically. Phytosomes are recently introduced herbal formulations that are better absorbed and as a result produce better bioavailability and actions than the conventional phyto-molecules or botanical extracts. In the recent days, most of the prevailing diseases and nutritional disorders are treated with natural medicines. Several plant extracts and phytoconstituents, despite having excellent bioactivity in vitro demonstrate less or no in vivo actions due to their poor lipid solubility or improper molecular size or both, resulting in poor absorption and bioavailability. So, much work has been directed towards the development of new concept in herbal delivery system i.e., “phytosomes” which are better absorbed, utilized and as a result produce better results than conventional herbal extracts owing to the presence of phosphatidylcholine which likely pushes the phytoconstituent through the intestinal epithelial cell outer membrane, subsequently accessing the bloodstream phytosomes have improved pharmacokinetic and pharmacological parameter which in result can advantageously be used in the treatment of the acute and chronic liver disease of toxic metabolic or infective origin or of degenerative nature

However, modern phyto pharmaceutical research can solve the scientific needs (such as determination of pharmacokinetics, mechanism of action, site of action, accurate dose required etc.) of herbal medicines to be incorporated in novel drug delivery system, such as nanoparticles, microemulsions, phytosomes, matrix systems, solid dispersions, liposomes, solid lipid nanoparticles and so on. In the past, almost all the medicines were from the plants; the plant being man's only chemist for ages. Herbs are staging a comeback, herbal ‘renaissance’ is happening all over the globe and more and more people are taking note of herbal therapies to treat various kinds of ailments in place of mainstream medicine. There are three main reasons for the popularity of herbal medicines:

Also there is increasing evidence that many current drug therapies simply suppress symptoms and ignore the underlying disease processes. In contrast, many natural products appear to address the cause of many diseases and yield superior clinical results. Unfortunately, most physicians and patients are not aware that these natural alternatives exist. Some drugs have an optimum concentration range within which maximum benefit is derived, and concentrations above or below this range can be toxic or produce no therapeutic benefit at all.

On the other hand, the very slow progress in the efficacy of the treatment of severe diseases has suggested a growing need for a multidisciplinary approach to the delivery of therapeutics to targets in tissues. From this, new ideas on controlling the pharmacokinetics, pharmacodynamics, non-specific toxicity, immunogenicity, bio-recognition and efficacy of drugs were generated. These new strategies, often called drug delivery systems (DDS), are based on interdisciplinary approaches that combine polymer science, pharmaceutics, bioconjugate chemistry.

Phytosomes: The effectiveness of any herbal medication is dependent on the delivery of effective level of the therapeutically active compound. Severe limitation exists in their bioavailability when administered orally or topically. Phytosomes  are recently introduced herbal formulations that are better absorbed than extracts. The term "phyto" means plant, while "some" means cell‐like. Over the past century; phytochemical and phyto‐pharmacological sciences established the compositions, biological activities and health promoting benefits of numerous botanical products. Most of the biologically active constituents of plants are polar or water soluble molecules. However, water soluble phytoconstituents (like flavonoids, tannins, glycosidic aglycones etc) are poorly absorbed either due to their large molecular size which cannot absorb by passive diffusion, or due to their poor lipid solubility; severely limiting their ability to pass across the lipid‐rich biological membranes, resulting poor bioavailability 1.

Phytomedicines, complex chemical mixtures prepared from plants, have been used for health maintenance since ancient times. But many phytomedicines are limited in their effectiveness because they are poorly absorbed when taken by mouth. The Phytosome® technology, developed by Indena S.p.A. of Italy, markedly enhances the bioavailability of select phytomedicines, by incorporating phospholipids into standardized extracts and so vastly improve their absorption and utilization 2.

Over the past century, chemical and pharmacologic science established the compositions, biological activities and health giving benefits of numerous plant extracts. But often when individual components were separated from the whole there was loss of activity the natural ingredient synergy became lost 3.

Standardization was developed to solve this problem. As standardized extracts became established, poor bioavailability often limited their clinical utility. Then, it was discovered that complexation with certain other clinically useful nutrients substantially improved the bioavailability of such extracts. The nutrients so helpful for enhancing the absorption of other nutrients are the phospholipids. Phospholipids are complex molecules that are used in all known life forms to make cell membranes. They are cell membrane building blocks, making up the matrix into which fit a large variety of proteins that are enzymes, transport proteins, receptors, and other biological energy converters. In humans and other higher animals the phospholipids are also employed as natural digestive aids and as carriers for both fat‐miscible and water miscible nutrients 4.

Increased bioavailability of the phytosomes over the simpler, non complex plant extracts has been demonstrated by pharmacokinetic (tissue distribution) and activity studies, conducted in animals as well as in humans. Phytosomes has an added dimension the proven health giving activity of the phospholipids themselves. Phytosome is also often known asHerbosomes 5. Phytosomes exhibit better pharmacokinetic and pharmacodynamic profile than conventional herbal extracts. Molecular layer consisting of PC and other phospholipids provides a continuous matrix into which the proteins insert (figure 1). 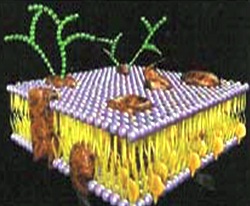 Hence, the phytomolecules (figure 2) produce a lipid soluble molecular complex with phospholipids, also called as phyto‐phospholipid complex. Molecules are anchored through chemical bonds to the polar choline head of the phospholipids, as can be demonstrated by specific spectroscopic techniques 8, 9. Precise chemical analysis indicates the unit phytosome is usually a flavonoid molecule linked with at least one phosphati-dylcholine molecule. 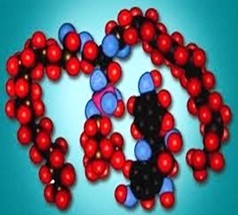 FIGURE 2: A FLAVONOID MOLECULE IS ENVELOPED BY A PHOSPHOLIPID  MOLECULE

The phytosome technology produces a little cell, whereby the plant extract or its active constituent is protected from destruction by gastric secretions and gut bacteria owing to the gastro protective property of phosphatidylcholine 10.

Difference between liposome and phytosomes: A liposome is formed by mixing a water soluble substance with phosphatidylcholine in definite ratio under specific conditions. Here, no chemical bond is formed; the phosphatidylcholine molecules surround the water soluble substance. There may be hundreds or even thousands of phosphatidylcholine molecules surrounding the water‐soluble compound. In contrast, with the herbosome process the phosphatidylcholine and the plant components actually form a 1:1 or a 2:1 molecular complex depending on the substance(s) complexed, involving chemical bonds (hydrogen bonds). This difference results in phytosome being much better absorbed than liposomes showing better bioavailability. phytosomes have also been found superior to liposomes in topical and skin care (cosmetic) products 11.

Phytosomes are not liposomes ‐ structurally, the two are distinctly different as shown in Fig. The phytosome is a unit of a few molecules bonded together, while the liposome is an aggregate of many phospholipid molecules that can enclose other phytoactive molecules but without specifically bonding to them 12, 13. This difference results in phytosome being much better absorbed than liposomes showing better bioavailability. Phytosomes have also been found superior to liposomes in topical and skin care (cosmetic) products.

In liposomes, the active principles are water soluble and are hosted in the inner cavity, with little, if any, interaction taking place between the hydrophilic principle and the surrounding lipid core. Conversely, phytosome’s host their polyphenolic guest, generally little soluble both in water and in lipids, at their surface where the polar functionalities of the lipophilic guest interact via hydrogen bonds and polar interactions with the charged phosphate head of phospholipids, forming a unique arrangement that can be evidenced by spectroscopy. The phytosome formulation also increases the absorption of active ingredients when topically applied on the skin, and improves systemic bioavailability when administered orally. In water medium, a phytosome will assume a micellar shape, forming a spherical structure, overall similar to a liposome, but with a different guest localization 14. 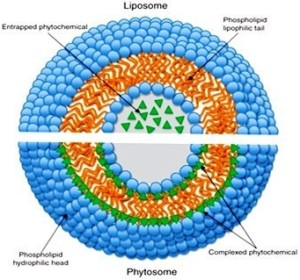 FIGURE 3: DIFFERENCE BETWEEN LIPOSOME AND PHYTOSOME 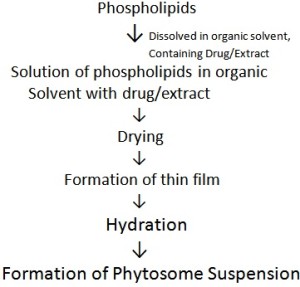 Properties of Phytosomes: The term phytosome is used to define a complex between a natural product and natural phospholipids, like soy phospholipids that are obtained by the reaction of stoichiometric amounts of phospholipids and phytoconstituents in an appropriate solvent. Spectroscopic data reveal that the main phospholipid‐substrate interaction is due to the formation of hydrogen bonds between the polar head of the phospholipids (i.e., phosphate and ammonium groups) and the polar functionalities of the substrate.

Most of the herbosome studies are focused on Silybum marianum (Milk thistle), which contains premier liver protectantflavonoids.Silymarin primarily contains three flavonoids of the subclassflavonol (having a fully saturated C‐ring).

Silybin predominates,followed by silydianin and silychristin. Silybin is actually aflavonolignan, probably within the plant by the combination of aflavonol with a coniferyl alcohol.  Silybin is themost potent of the three, Silymarin has been shown to have positiveeffects in treating liver diseases of various kinds, including hepatitis.cirrhosis, fatty infiltration of the liver (chemical‐ and alcohol induced fatty liver), and inflammation of the bile duct 38.

The antioxidant capacity of Silymarin substantially boosts the liver's resistance to toxic chemicals the fruit of the Milk thistle plant contains flavonoids known for hepatoprotective effects, a standardized extract from Silybum marinum is an excellent liver protectant but is poorly absorbed orally. Silybin protects the liver by conserving glutathione in the parenchymal cells, while PC helps to repair and replace cell membranes.  These constituents are likely to offer the synergistic benefit of sparing liver cells from destruction. In its native form within the Milk thistle fruit, Silybin occurs primarily complexed with sugars, as a flavonyl glycoside or flavonolignan. Silybin has been extensively researched and found to have impressive bioactivity, although limited by poor bioavailability.

Ginkgoselect Phytosome vs Ginkgo biloba Extract: The pharmacokinetic profile of Ginkgo selectR Phytosome has been defined in experimental animals 41, 42 and in human volunteers. Its bioavailability has been compared to GBE. Fifteen healthy volunteers were randomly divided into two groups and administered respectively with GinkgoselectR and GinkgoselectR Phytosome, providing both 9.6 mg of total terpene lactones. The subjects switched formulations after a week of wash out. Blood samples were collected at 30, 60, 120, 180, 240, 300 and 400 min after ingestion. Terpene lactones detection was performed by means of liquid chromatography/atmospheric pressure chemical ionization mass spectrometry (LC/APCI-ITMS). Ginkgolides A, B and bilobalide were absorbed to a higher extent (about three-fold) after administration of GinkgoselectR Phytosome (figure 5). 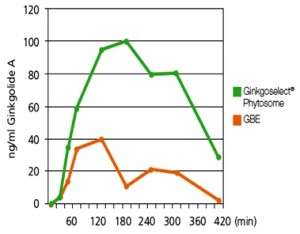 This means that the Phytosome not only increases the active ingredient tolerability and absorption, but also improves its efficacy (figure 6). 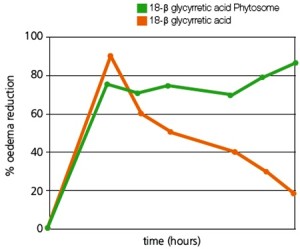 Herbal Drugs used for the management of periodental disease:

CONCLUSION: This review is an attempt to present a concise profile of phytosomes as a delivery system. Herbosomes are novel formulations which offer improved bioavailability of hydrophilic favonoids and other similar compounds through the skin or gastrointestinal tract. They have many distinctive advantages over other conventional formulations. The formulation methodology for phytosome is simple and can be easily upgraded to a commercial scale.