ABSTRACT: The main objective of this study is to evaluate the antibacterial activity and phytochemical analysis of Lemon (Citrus limon L.) and Orange (Citrus sinensis L.) Increasing resistance of microorganisms to present day antibiotics arose a way to focus on antimicrobial activity and future prophylactic potential of the lemon and orange peels. In the present study, a total of two extract each of Methanol & Ethanol of Citrus limon and Citrus sinensis were evaluated for their antibacterial activity due to the phytochemicals present in the both the fruit’s peels. All the extracts showed antibacterial activity against all the four bacterial stains. The antibacterial activity of Methanolic and Ethanolic peel extract of C. limon L. and C.sinensis L. were evaluated on bacterial strains Escherichia coli, Pseudomonas aeruginosa, Klebsiella pneumonia and Staphylococcus aureus by recording minimum inhibitory concentration (MIC) by disc diffusion method. Methanolic extract of C. sinensis showed maximum inhibition zone of 17 mm against S. aureus.

INTRODUCTION: Citrus fruit in general contain sugar, polysaccharide, organic-acid, lipids, carotenoids, vitamins, minerals, flavonoids, bitter lemonoids and volatile compounds. C. limon L. is a good source of potassium, calcium and vitamin C. limon L. or lime juice have been reported to exhibit antimicrobial activity against Vibrio cholera 1. Hesperidin is an abundant and inexpensive by-product of citrus cultivation and is the major flavonoid in sweet orange and lemon 2. Seive (1952) and Robbin (1967) in a study showed based upon an experiment in male and female mice, hesperidin could be given to humans clinically as an anti-fertility agent, along with other substitution factors such as vitamins, endocrines, amphetamine derivatives and decholic acid derivatives 3, 15

Considering the vast potentiality of plants as sources for antimicrobial drugs with reference to antibacterial agents 4, the current investigation was carried out to screen the antibacterial activity of Citrus limon L. and Citrus sinensis L. peels against some pathogenic bacterial strains.

Collection of plant material: Fresh and healthy fruits of C. limon L. and C. sinensis L. were collected from the local market in Agra. Peels were removed, washed with running water 2-3 times and air dried in shed. After that samples were ground to fine powder in blender and then stored in airtight closed bottles for two days before being used for analysis.

Collection, Growth and Maintenance of Test Microorganism for antimicrobial studies:

The test microorganisms E. coli (MTCC No.294), P. aeruginosa (MTCC No.2581), K. pneumonia (MTCC No.2057) and S. aureus (MTCC No.3160) were isolated from soil samples and confirmed by sending the samples to IMTECH, Chandigarh. The bacterial cultures were maintained on nutrient agar slants at 37ºC and stored at 4ºC. Cultures were reactivated before every test. Activation of the bacterial culture was carried out by streaking culture from the slants on to a Muller Hinton (MH) (HI-MEDIA) agar plate and then incubating them overnight at 37ºC. Single colony was picked from this plate and transferred to Muller Hinton broth and incubated for 16 – 18 hours at 37ºC prior to the test. Solvent used were methanol and ethanol.

50gm of C. limon L. and 50 gm of C. sinensis L. peel powder material were uniformly packed into a thimble and run in Soxhlet extractor separately. It was extracted with 200ml methanol and ethanol (for each extract) for the period of about 48 hour till the solvent in the siphon tube of an extractor become colorless. After that extracts were filtered and solvent evaporate from extract in rotary evaporator to get the syrupy consistency. The residue was dried over anhydrous sodium sulfate to remove trace of alcohol. Then extract was kept in refrigerator at 4°C for detect antibacterial activity and analyzed their physical and chemical property.

Following the methodology of Mukerjee et al (1996), the antibacterial susceptibility tests were carried out using disc diffusion assay 5. Sterile filter paper discs (Whatman no. 1, 5 mm in diameter) were impregnated with 40 μl of each of the extract (10 mg/ ml) to give a final concentration of 1 mg/disc and left to dry in vacuum to remove residual solvent, which might interfere with the determination. The bacteria were first grown in nutrient agar for 18 hour before use. The inoculum suspensions were standardized. A bacterial suspension was prepared and added inoculum size of 1 × 108 CFU/ml for bacteria and 1 × 107 cell/ml for fungi 6 to the sterilized medium before solidification.

The media with bacteria was poured into sterilized Petri dishes under aseptic condition 7. Five hundred micro liters of the suspensions were spread over the plates containing Mueller-Hinton agar using a sterile cotton swab in order to get a uniform microbial growth on test plates and then tested against the effect of the plant extracts. Extract discs were then placed on the seeded agar plates at the concentration of 50, 25, 12.5 and 6.25 mg/ml. Each extract was tested in triplicate. All petridishes were sealed with sterile laboratory parafilms to avoid eventual evaporation of the test samples. The effects were compared with that of the standard antibiotic Gentamicin (10mcg/disc) as standard for Bacteria 8.The plates were kept at 4 °C for 1 h for diffusion of extract, thereafter were incubated at 37°C for bacteria (24 h) 9. After incubation the average of inhibition zones was recorded 10. Inhibition zones were measured and compared with the standard reference antibiotics.

The microbial inoculum was standardized at 0.5 McFarland. Original McFarland standards were made by mixing specified amounts of barium chloride and sulphuric acid together. Mixing the two compounds forms a barium sulfate precipitate, which causes turbidity in the solution. A 0.5 McFarland standard is prepared by mixing 0.05 ml of 1.175% barium chloride dehydrate (BaCl2.2H2O), with 9.95 ml of 1% sulfuric acid (H2SO4). The standard could be compared visually to a suspension of bacteria in sterile saline or nutrient broth11.

The minimum inhibitory concentration (MIC) value was considered as the lowest extract concentration with no visible growth for each plant extract test pathogens 9. To measure the MIC values, various concentrations of the stock, 50, 25, 12.5 and 6.25 mg/ml were assayed against the test pathogens. Plant extracts were re-suspended in methanol to make 15 mg/ml final concentration and then two fold serially diluted; 1 ml of each extract was added to test tubes containing 1 ml of sterile Mueller Hinton Agar (for Bacteria). The tubes were then inoculated with standard size of microbial suspension (bacteria 1 × 108 CFU/ml) and the tubes were incubated at 37 °C for 24 h in a BOD incubator and observed for change in turbidity after 24 h and compared with the growth in controls 12. A tube containing nutrient broth and inoculum but no extract was taken as control. Bacterial suspensions were used as negative control, while broth containing standard drug was used as positive control. Each extract was assayed in duplicate and each time two sets of tubes were prepared, one was kept for incubation while another set was kept at 4°C for comparing the turbidity in the test tubes.

The citrus peels are well known for their essential nutrients and contain many phytochemicals which can be effectively used as drugs or as food supplements. Kabra et al (2012) reported that the peel of Citrus fruits is arich source of alkaloids, sterols, tannins, flavonoid, glycosides, β and γ- sitosterol, coumarins and volatile oils 16.

Alkaloids - Mayer’s test: About 0.5-1 ml of sample was taken. Few drops of Mayer’s reagent were added, shaken and allowed to stand for some time. Appearance of cream color ppt. indicates that alkaloids were present in the sample.

Glycosides - Legal test: Sample was treated with small amount of pyridine. Few drops of alkaline sodium nitroprusside solution were added. If blood red color appears, then glycosides was present in the sample.

Flavonoids-Shinoda test (Magnesium hydrochloride reduction test): To the test solution (0.5 0- 1 ml), few reagent of magnesium ribbon were added and HCl was added drop wise. Pink, scarlet, crimpson and red or occasionally green to blue color appears after few minutes, if flavonoid is present in the sample.

Proteins and amino acids -Ninhydrin test: About 0.5 – 1 ml of sample was boiled with 0.2 percent and solution of Ninhydrin (Indane 1, 2, 3, trione hydrate). If violet color appear, then protein is present in the sample.

Phytosterols-Salkowski test: About 0.5 – 1 ml of test solution was treated with chloroform and few drops of concentration sulphuric acid were added, shaken well. Formation of yellow lower layer indicates the presence of the triterpenoids.

Saponins: 2 ml of each extract was dissolved with 2 ml of Benedict’s reagent. Blue black precipitate indicates the presence of Saponins 14. 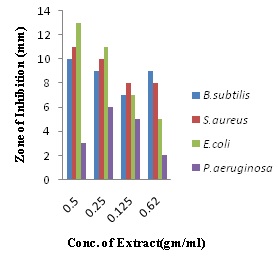 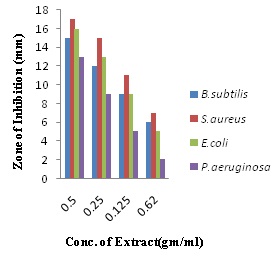 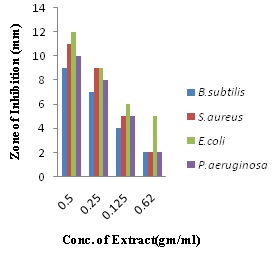 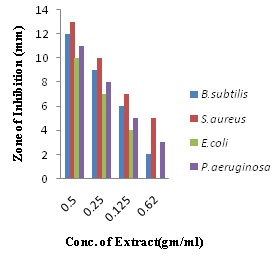 Methanolic and Ethanolic C. Limon L. and C. sinensis L. Extracts revealed the presence of various phytochemicals in their respective tests which are shown in the table below.

CONCLUSION: Based on the above results it can be concluded that the waste parts of the citrus fruits like the peels could be very good source for the extraction of antimicrobial components. The antibacterial activity of citrus fruit peels is due to the phytochemicals present in them. Glycosides were found in major amount in both methanolic and ethanolic extract of C. limon and C. sinensis followed by Alkaloids which were majorly found in ethanolic extract of C. limon and C. sinensis while methanolic extract showed the presence of alkaloid in C. sinensis only.  These extracts could further be used as a drug after proper pharmacological evaluation and clinical trials

CONFLICT OF INTEREST: None has been declared.