ABSTRACT: The objective of this research was to develop and validate a simple, sensitive and specific Liquid Chromatography – Tandem Mass Spectrometry (LC–MS/MS) quantification of Varenicline in human plasma using Varenicline -D4 as Internal Standard (IS). The analyte was separated on a Zorbax SB-C18, 4.6 x 75 mm, 3.5 μm, 80 Å column with an isocratic mobile phase of 5mM ammonium formate: acetonitrile (10:90 v/v) at a flow rate of 0.8 mL/min. The protonated ions were formed by a turbo ionspray in a positive mode was used to detect analyte and internal standard (IS). The analytes were monitored by electrospray ionization in positive ion multiple reaction monitoring (MRM) mode was used to detect the Varenicline at m/z 212.1/169.0. This method is validated over a linear concentration range of 50.0–10000.0 pg/mL with a correlation coefficient (r) of ≥ 0.9997. Both drug and internal standards were stable in plasma samples. This method demonstrated intra and inter-day precision within 1.2–4.5 and 3.5–7.4 and accuracy within 91.70-105.5% and 103.9-110.6%.

INTRODUCTION: Varenicline tartrate (VT) (7,8,9,10-tetrahydro-6,10-methano-6H-pyrazino [2,3-h] [3] benzazepine) was recently introduced as a novel efficacious smoking cessation aid that acts as an α4β2 nicotinic acetylcholine receptor (nAChRs) partial agonist, centrally acting as a highly selective partial agonist for the nicotinic acetylcholine receptor 1-2. Varenicline has mixed agonistic-antagonistic properties, thus it has the therapeutic benefit of relieving the symptoms of nicotine withdrawal and cigarette craving during abstinence while blocking the reinforcing effect of nicotine in those who lapse 3.

Varenicline tartrate (Champix® and Chantix®; Pfizer) has been approved by the Food and Drug Administration (FDA) as an aid to smoking cessation 4.

Maximum plasma concentrations of varenicline tartrate occur typically within 3 to 4 h after oral administration. Mean ± standard deviation (SD) Cmax was 9.22±2.05 ng/ml at the recommended dose. The approved regime of VT is 1mg for 12 weeks, starting with a 1-week titration period 5-6.

The quality of pharmaceutical product of VT, in terms of purity and stability of the active substance and/or finished product is vital for the effective and safest delivery of its therapeutic values to the smokers. A detailed understanding of correlations of drug levels with drug action is an important aspect of the routine use of drug. The accurate quantification of agents in biological matrices such as blood, serum, urine and tissue samples is the cornerstone of therapeutic drug monitoring. Therefore, detailed specific, reproducible and accurate method for the quantification of VT is necessary 7-8. Additionally, examining the matrix effects represents an important issue in liquid chromatography tandem mass spectrometric (LC-MS/MS), particularly when dealing with biological matrices such as biological fluids. These phenomena can be reduced by an efficient sample preparation and an adequate chromatographic separation with the elution of the analytes outside the matrix effect time window generally observed at the beginning of the chromatogram 9-10.

However in quantitative analysis, these conditions might be insufficient to reduce interferences, and other approaches should be combined to compensate residual matrix effects; the use of multiple reaction monitoring (MRM) mode can be one of these approaches two LC-MS/MS methods have been published for the quantification of varenicline in human plasma, the first one was done by which has then been applied for the study of varenicline pharmacokinetics. The second method was developed for determination of nicotine, cotinine, trans-3’-hydroxycotinine and varenicline, which was performed as a procedure for a clinical study on smoking cessation to confirm abstinence from smoking and detection of overdose 11. In dosage form, five methods were reported at microgram level using ultra performance liquid chromatography (UPLC) 12, High powered liquid chromatography (HPLC) 13-14, reversed phase high powered liquid chromatography (RP-HPLC) 15-16, spectrophotometric 17-18, electrometric 19 and capillary zone electrophoresis 20.

It is important to develop the good bio analytical method with proper deuterated or analogue based internal standards interms of matrix effect and reproducibility. Moreover, Should not consider the runtime always to minimize the analysis rather than reproducibility and stability for long analytical batches.

The present study describes, for the first time, the development and validation of an isocratic LC-MS/MS with highly efficient, more specific and highly sensitive, simple extraction, good linear method for quantitative determination of VT in human plasma with the small amount of plasma usage. 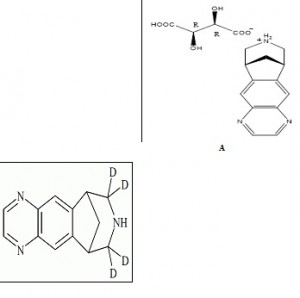 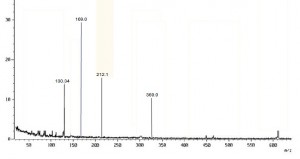 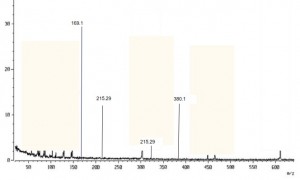 Liquid-liquid extraction was carried out to extract the drug and IS for this purpose 100 µL of respective concentration of plasma sample was taken into polypropylene tubes  and mixed with 50 µL of internal standard (30.0 ng/mL). This was followed by addition of 100 mL of 10mM KH2PO4 solution and 2.5 mL of methyl tertiary butyl ether and vortexed for approximately 5 minutes. Then the Samples were centrifuged at 4000 rpm for 10 minutes at 20°C. Further, the supernatant was transferred into labeled polypropylene tubes and evaporated with nitrogen gas at 40°C. Then the samples were reconstituted with the reconstitution solution (Acetonitrile: 5mM ammonium formate (90:10)) and vortexed for 2 minutes.  Finally, Sample was transferred into auto sampler vials to inject into the LC-MS/MS.

The matrix effect due to plasma was used to evaluate the ion suppression/enhancement in a signal when comparing the absolute response of QC samples after pretreatment (Liquid-liquid extraction with MTBE) with that of the reconstituted samples. Experiments were performed at MQC levels in triplicate with six different plasma lots. The acceptable precision (% CV) of ≤ 15% was maintained.

Limit of detection and quantification (LOD and LOQ):

The limit of detection (LOD) is a parameter that provides the lowest concentration in a sample that can be detected from background noise but not quantitated. LOD was determined using the signal-to-noise ratio (s/n) of 3:1 by comparing test results from samples with known concentrations of analytes with blank samples. The limit of quantitation (LOQ) is defined as the lowest concentration of analyte that can be determined with acceptable precision and accuracy. The LOQ was found by analyzing a set of mobile phase and plasma standards with a known concentration of VT.

The goal of this work is to develop and validate a simple, rapid and sensitive assay method for the quantitative determination of VT from plasma samples. LC-MS/MS has been used as one of the most powerful analytical tool in clinical pharmacokinetics for its selectivity, sensitivity and reproducibility. The MS optimization was performed by direct infusion of solutions of VT and VT d4 into the ESI source of the mass spectrometer. The vital parameters like ionization type, temperature, voltage, gas parameters such as nebulizer and heater gases, compound parameters like DP, EP, FP, CE and CXP were optimized to obtain a better spray shape and ionization to form the respective productions from the protonated VT and VT d4 molecules. Chromatographic conditions especially, composition of the mobile phase, selection of suitable column was optimized through several trials to achieve the best resolution and increase the signal of analyte and internal standard. Different extraction methods like solid phase extraction, Liquid-liquid extraction, precipitation methods were optimized for extraction of VT and VT d4 from the plasma sample.

A good separation and elution were achieved using 5 mM ammonium formate: acetonitrile (10:90v/v) as the mobile phase, at a flow-rate of 0.6 mL/minutes and injection volume of 20 µL. Liquid-liquid extraction was chosen to optimize the drug and internal standard. The retention time was optimized 9.2 minutes for VT and 8.2 minutes for VT d4 (Fig.4).

Calibration curve was plotted as the peak area ratio (VT/VT d4) versus (VT) concentration. Calibration was found to be linear over the concentration range of 50.0 – 10000.0 pg/mL. The correlation coefficient (r2) was greater than 0.9997 for all curves (Table 1).

The selectivity of the method was assessed by comparing chromatograms of blank plasma. There were no significant endogenous peaks were observed at respective retention time of VT and VT d4. The results indicate that the method exhibited both good specificity and selectivity.

Limits of Detection and Quantification (LOD&LOQ):

The LOQ& LOD signal-to-noise (S/N) values found for six injections of VT at LOQ & LOD concentrations were 31.95pg/ml and 10.5pg/ml.

The results revealed that VT was stable in plasma for at least 48 h at room temperature, and 78 h in an auto sampler.  It was confirmed that repeated freezing and thawing (three cycles) of plasma samples spiked with VT at LQC and HQC levels did not affect their stability. The long-term stability results also indicated that VT was stable in a matrix up to 71days at a storage temperature of -30°C. The results obtained from all these stability studies are tabulated in (Table 3). Precision (% CV) is less than 5 for Room temperature, long-term, Freeze thaw, auto sampler stability.

CONCLUSION: The proposed research work is highly specific due to the inherent selectivity of tandem mass spectrometry and has significant advantages over other described methods in previously. Quantification of Varenicline tartrate was compared with respective isotope labeled internal standards. Extraction of analyte and IS were achieved by using LLE. Linearity range, column, mobile phase, flow rate, injection volume, plasma usage volume for analysis was improved.  Hence this method has significant advantages over previously reported methods in-terms of Selectivity, sensitivity, Linearity, Reproducibility.