Vishnukanta* and A. C. Rana

ABSTRACT:Ayurveda is time-tested science of treating disease with natural things like plant, animals and minerals. It   remains one of the most ancient and yet living traditions practised widely in India, Sri Lanka and other countries and has a sound philosophical and experiential basis. Plumbago zeylanica is commonly known as white chitraka, belongs to family plumbaginaceae. It is distributed as a weed throughout the tropical and subtropical countries of the world. It is a perennial sub-scandent shrub, grows throughout India, especially in Bengal, Uttar Pradesh, South India and Sri Lanka, in moist places. Traditionally it is used as a stimulant, digestant, expectorant, laxative, abortifacient and in the treatment of muscular pain and rheumatic disease. So the objective of the present review is to highlight the phytochemical and pharmacological information of this plant.

INTRODUCTION: Ayurveda is time-tested science of treating disease with natural things like plant, animals and minerals. It   remains one of the most ancient and yet living traditions practised widely in India, Sri Lanka and other countries and has a sound philosophical and experiential basis. Atharvaveda (around 1200 BC), Charak Samhita and Sushrut Samhita (1000- 500 BC) are the main classics that give detailed descriptions of over 700 herbs. A scholarly description of the legacy of Charaka in contemporary idiom, best attempted with a commentary from modern medicine and science viewpoint, gives some glimpses of ancient wisdom. Indian healthcare consists of medical pluralism and ayurveda still remains dominant compared to modern medicine, particularly for treatment of a variety of chronic disease conditions. India has about 45,000 plant species; medicinal properties have been assigned to several thousands. About 2000 are found in the literature; indigenous systems commonly employ about 500–700.

The plant species Plumbago zeylanica is distributed as a weed throughout the tropical and subtropical countries of the world. The family Plumbaginaceae consists of 10 genera and 280 species. The genus Plumbago includes 3 species, namely Plumbago indica L. (P. rosea L.) P. capensis L., and P. zeylanica L., which are distributed in several parts of India.

Plumbaginales belongs to the superorder Malviflorae and comprises two families, Plumbaginaceae and Limoniaceae. Its representatives are chemically characterized by the presence of naphthoquinones, flavonoids, terpenoids and steroids, many of them being responsible for biodynamic activities. Plumbago is commonly known as Chitraka. The name chitraka denotes one which renders discoloration to the skin, when applied topically.

It is a perennial sub-scandent shrub, grows throughout India, especially in Bengal, Uttar Pradesh, South India and Sri Lanka, in moist places. It is also cultivated commercially. The flowering occurs from September to November. The red flowered variety of chitraka grows abundantly of Khasi hills. Found wild in Peninsular India and west Bengal, and cultivated in gardens throughout India. The plant grows 0.5-1.0 meters in height 2. 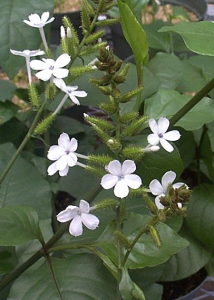 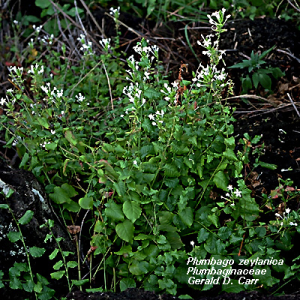 Leaves: Leaves are simple, alternate, 8 cm long and 3 cm broad, ovate or oblong, petiole narrow, amplexicaul at the base and often dilated into stipule like auricles 3.

Roots: Roots are 30 cm or more in length, 6 mm or more in diameter, stout, cylindrical, friable, blackish red in colour, light yellow coloured when fresh, reddish brown when dry, straight unbranched or slightly branched with or without secondary roots, with uniform and smooth texture. It has characteristic odour with acrid and bitter taste. Bark is thin and brown in colour 3.

Leaves: Leaves are caustic, vesicant, aphrodisiac, good for scabies, stimulant, and also use in sore and swelling 6. They are used to treat infections and digestive problems such as dysentery. Externally a paste is applied to painful rheumatic areas or to chronic and itchy skin problems 7.

Stem: The ethanolic stem extract inhibited the growth of Leishmania amazonensis promastigotes by 88% at 100 µg/ml 1.

Root powder showed presence of protease enzyme, trace quantity of Vit. A, B1, B2, and C and was found to be GIT flora normalizer. It stimulates the proliferation of coliform bacteria in mice. It is abortifacient and has vesicant properties. The tincture of the root bark is a powerful sudorifice and antiperiodic. It irritates the uterus, enhances its contractions, and hence is useful in cleansing it. It is absolutely contraindicated in pregnancy 2. In the form of an external paste; root is used in filariasis, depigmentation of the skin and anasarca generalized swelling all over the body. In rheumatic joints, its paste applied is beneficial. It is recommended in the treatment of non-bleeding piles. The same is extremely helpful in colitis. The root is a powerful acro-narcotic poison. It causes abortion. It will expel fetus, dead or alive.

Chitraka effectively used in the enlarged liver and spleen. It relieves the obstructed phlegm in chronic colds and cough. Chitraka is a bitter tonic and recommended as a rejuvenator. Orally chitraka is used in digestive disorders like loss of appetite, indigestion also in piles, worms, colitis, ascites and liver diseases. It augments the appetite, improves digestion, relieves constipation and alleviates the urticaria- the allergic skin rashes 3.

Leishmanicidal Activity: In the case of leishmaniasis, Plumbago species have been shown to contain compounds with significant activity. The quinones corresponds to promising antileishmanial substances. Plumbagin a naphthoquinone isolated from Plumbago species is reported to have an activity (IC 50) of 0.42 and 1.1µg/ml against amastigotes of Leishmania Donovani and L. amazonensis. Plumbagin and its dimers, 3, 3‘-bisplumbagin and 8, 8‘-bisplumbagin have been used in the treatment of cutaneous leishmaniasis in Amazonian Bolivia 1.

Trypanocidal Activity: Plumbagin exhibited high potency (IC 90= 1-5µg/ml) against six strains of T. cruzi epimastigotes, while the dimer 3, 3’-bisplumbagin and 8, 8’-bisplumbagin were less effective, with IC 90 in the 25-100 µg/ml range1.

Plumbago zeylanica L had marked inhibition effects on HBeAg and HBsAg which expressed by 2.2.15 cells 9.

Anticarcinogenic Activity: Male F344 rats; administered with plumbagin at 200 ppm in the diet for two weeks beginning one week before azoxymethane (AOM) injection had a lower incidence and multiplicity of tumors in the small intestine than those administered AOM alone. This suggests that plumbagin could be a promising chemopreventive agent for human intestinal neoplasia. Hexokinase, phosphor-glucoisomerase and aldolase levels increased in hepatoma-bearing rats, but they decreased to near-normal levels in animals administered plumbagin. Levels of the gluconeogenic enzymes, glucose-6-phosphatase and fructose-1, 6-diphosphatase decreased in hepatoma-bearing animals but increased in the animals treated with plumbagin.

Plumbagin inhibited NF-κB activation induced by TNF, and other carcinogens and inflammatory stimuli (e.g. phorbol 12-myristate 13-acetate, H2O2, cigarette smoke condensate, interleukin-1β, lipopolysaccharide, and okadaic acid). It also suppressed the constitutive NF-κB activation in certain tumor cells. The suppression of NF-κB activation correlated with sequential inhibition of the tumor necrosis factor (TNF)-induced activation of IκBα kinase, IκBα phosphorylation, IκBα degradation, p65 phosphorylation, p65 nuclear translocation, and the NF-κB-dependent reporter gene expression activated by TNF, TNFR1, TRAF2, NIK, IKK-β, and the p65 subunit of NF-κB. It also suppressed the direct binding of nuclear p65 and recombinant p65 to the DNA and this binding was reversed by dithiothreitol both in vitro and in vivo. Overall indicate that plumbagin is a potent inhibitor of the NF-κB activation pathway that leads to suppression of NF-κB-regulated gene products. This may explain its cell growth modulatory, anticarcinogenic, and radiosensitizing effects 13.

In another study the synergistic activity of antimycobacterial constituents from Plumbago zeylanica was evaluated in combination with isonicotinic acid hydrazide (INH) against four atypical organisms, namely, Mycobacterium intracellulare, M. smegmatis, M. xenopei and M. chelonei. The potency of INH was increased four-fold, The MIC values of plumbagin (from Plumbago zeylanica) were thus lowered from 1.25-2.5 to 0.15-0.3 µg/ml due to synergism with INH 18.

Water, ethanol, ethyl acetate and acetone extract of Plumbago zeylanica were used to evaluate the anti-helicobacter pylori activity. Ethyl acetate extract exhibited the lowest minimum inhibitory concentration against five H. pylori strains, of which ranged from 0.32 to 1.28mg/ml, followed, in ascending order, by the acetone, ethanol and water analogs. Bactericidal activity was also determined, with the lowest minimum bactericidal concentrations demonstrated for the ethyl acetate, followed in ascending order, by the acetone and ethanol analogs 19.

Some worker reported the significant anti-implantation and abortifacient activity in albino rats without any teratogenic effect of plumbagin in the doses of 1mg/100g 22. The roots of Plumbago zeylanica has been reported to be a powerful poison when given orally or applied to ostium uteri, causes abortion 23.

Plumbagin administered at 10 mg/kg for 60 days caused selective testicular lesions in dogs. The wet weights of testes and epididymides were decreased. There was a significant reduction in protein, RNA and sialic acid concentration whereas the intratesticular cholesterol and acid/alkaline phosphatase were raised after drug treatment24. Hydroalcoholic extract of Plumbago zeylanica leaves showed highly potent (95.167 %) antiimplantation activity  because of anti-estrogenic activity, which antagonizes the action of estrogen, causes structural and functional changes in uterus. The antiestrogenic effect is also supported by decrease in glycogen content, diameter, thickness of endometrium, myometrium, reduced uterine lumen with decreased pits and folds, decreased in the number and size of the uterine glands, vaginal opening and cornification 25.

Central nervous system activity: The effects of a 50% ethanol extract of the root of P. zeylanica were investigated on locomotor behaviour and central dopaminergic activity in rats. The extract significantly increased the spontaneous motility in animals. The stereotypic behaviour which is characteristic of a dopamine agonist showed biphasic effects. The results showed that the extract of the root of P. zeylanica specifically enhanced the spontaneous ambulatory activity without inducing stereotypic behaviour 26.

Protective Effect against Cyclophosphamide Induced Geno-toxicity and oxidative Stress: Pretreatment with the alcoholic root extract of Plumbago zeylanica (250 and 500 mg/kg body weight orally for 5 days) significantly reduced the frequency of micronucleated polychromatic erythrocytes (MnPCEs), increased the PCE/NCE (normochromatic erythrocyte) ratio in the bone marrow, and decreased the levels of lipid peroxidation products with concomitant changes in the status of antioxidants. Both the doses of Plumbago zeylanica were effective in exerting a protective effect against cyclophosphamide induced genotoxicity and oxidative stress 31.

Hyperglycaemia in rats, treated with ethanol root extract of Plumbago zeylanica: The effects of the ethanol extract of the root of Plumbago zeylanica were studied in the rat. The results show that thigh muscle hexokinase, phosphofructokinase, pyruvate kinase and lactate dehydrogenase activities were significantly reduced by 12.07%, 51.02%, 24.32% and 25.16% respectively in rats treated with the ethanol extract of Plumbago zeylanica when compared with the control. Serum pyruvate and lactate were significantly lowered in the experimental rats by 23.64% and 46.29%, respectively. The reduction in the activities of the key enzymes of glycolysis and its end-products suggests a reduction in flux across the glycolytic pathway in the extract-treated rats. This impairs with delivery and utilization of glucose by the peripheral tissue, thus substantiating the reported hyperglycemia in the extract-treated rats 33.

CONCLUSION: Over the past decade, herbal medicine has become an item of global importance with both medicinal and economic implications. The history of medicine includes many ludicrous therapies, never the less, ancient wisdom has been the basis of modern medicine and will remain as one important source of future medicine and therapeutics.

In present review, we have made an attempt to congregate the botanical, phytochemical, pharmacological and ethno pharmacological information on Plumbago zeylanica. Survey of literature reveals the presence of naphthaquinone, plumbagin, chitanone, zelanone, flavonoids, terpenoids and steroids. Scientific research on this plant reported the antibacterial, antifungal, anticarcinogenic, analgesic and anti-inflammatory and antiallergic activity of various parts of this plant.

Vishnukanta* and A. C. Rana