ABSTRACT: Air pollution tolerance index was assessed with plant species located at ChinnaTirupathi, Salem, Tamil Nadu, India. This study was conducted during March, 2013. Since, all the lands are converted to buildings, it is essential to know more about plants and its benefits offered to the environment and the dangers, risks caused by cutting trees. In this study, our aim is to evaluate, whether the plant is toleranant or sensitive to pollution. From the results obtained, we can infer that all the plants collected were having APTI value in the range of 9.41 to 15.46. Selected plants having APTI score of less than 16 are grouped under plants sensitive to pollution and are biological indicators of air pollution. Sensitivity of certain plants to air pollutants is variable from place to place.

INTRODUCTION:Air is important for life on earth. Rapid increase in population and use of vehicles lead to the deterioration of quality of air. The concentration of pollution is increasing in developing country like India. Each year, more than 308 crore tons of CO2 and other pollutants are released into the earth’s atmosphere.  It is possible to estimate the overall effect of large number of pollutants as total pollution by measuring changes in plant 1. Plants are very important to maintain ecological balance but they are severely affected either directly or indirectly by air pollution 1, 2. When plant organs are exposed to pollutants in the atmosphere, as they are initial acceptors and especially leaves continuously exchange gases and the pollutant present is reflected on the plant health as they act as scavengers for air pollution 3.

Plants can be effectively used as bio indicators of urban air quality as well as a beautification agent 4. Various pollutants can be absorbed, accumulated by plants resulting in the reduced pollutant levels in environment 5. Plants when exposed constantly to environmental pollutants, induces functional weakening, structural simplification and finally leads to negative effects on other biotic communities. Plants and shrubs, when exposed to air borne pollutants, experience physiological and biochemical changes before exhibiting visible damage to leaves 6.

The response of plants to air pollution at physiological and biochemical levels can be understood by analyzing the factors that determines resistance and susceptibility. Any change in the atmosphere is reflected on the plant health.  Thus it is essential to observe the changes in plants which indicate air pollution.

Hence, the present study was undertaken to study the nature of plants in that locality by analyzing the changes in plants.

Air Pollution Tolerance Index (APTI) Determination: The leaf samples were collected from the experimental site - ChinnaTirupathi and brought to the laboratory for analysis.  The weight was taken a fresh and after washing the dust, weight was taken with the help of weighing machine.  Leaf length and width was also measured using scale.  The samples were estimated for leaf extract pH 7, 1, relative water content 8, 5, total chlorophyll & carotenoids 9 and ascorbic acid 10.

Air Pollution Tolerance Index 7 can be calculated by using the formulae;

Where A is ascorbic acid in mg/g, T is total chlorophyll in mg/g, P is pH of leaf sample and R is relative water content in (%).

RESULTS AND DISCUSSION: The general observations were recorded and shown in Table 1.  This is essential to know the amount of dust accumulated on the leaf surface and also the change observed with biochemical parameters in leaf of the selected plants.

From this observation, we can find more weight with Calotropis Gigantea. Likewise leaf length was found to be more for Polyalthia longifolia and leaf width for Pongamia pinnata (Table 1).

APTI Determination: Air pollution tolerance index was determined by a set of biochemical parameters such as ascorbic acid, chlorophyll, pH, relative water content. The recorded findings are shown in Table 2.

Air Pollution Tolerance Index score obtained for the plants were depicted in Figure 1.  Variation in internal components predicts the final APTI score which gives a measure of tolerance to pollution.

From the observations, it is clear that APTI was below 16 for all plants collected at the experimental site i.e. Chinna Tirupathi (Figure 1). 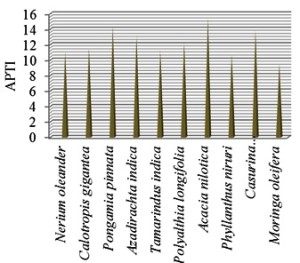 Higher the APTI, more the tolerant species, lower the APTI, more the sensitive species.  APTI is influenced by chlorophyll, ascorbic acid, pH and also relative water content.  Almost all plant species showed significant variation in biochemical parameters, the extent up to which each plant species affected varied from species to species and place to place. The ascorbic acid content was high in Pongamia Pinnata, Azadirachata indica, whereas it was low in Moringa Oleifera (Table 2).

Increased level of ascorbic acid may be due to the defense mechanism of plant. The free radical production under SO2 exposure would increase the free radical scavengers, such as ascorbic acid, superoxide dismutase, peroxidase etc. 11 based on dosage and physiological status of plant. The chlorophyll content was high in Acacia Nilotica, Phyllanthus Niruri, Moringa Oleifera. Carotenoid was found to be low in Nerium Oleander, whereas high in Acacia Nilotica (Table 2).  Chlorophyll is an index of productivity of plant, certain pollutants increases the total chlorophyll content, whereas others decrease it 1.

The more acidic nature demonstrates that air pollutants, mostly gaseous types, namely SO2, NOx, diffuse and form acid radicals in the leaf matrix by reacting with cellular water, which further affects the chlorophyll molecule.  Relative water content of leaves is an indicator of plants water status with respect to its physiological consequences of cellular water.

Relative water content was low for Phyllanthus Niruri but it was on higher side for all the other plants (Table 2).  Several factors can alter the results, for example, determination being tolerance or sensitive for one tested plant species could be changed during different seasons 5 and plants can be used as pollutant scavengers 12. Changes in APTI score that are observed with different plants (Figiure.1) in the present study might be due to the changes in the biochemical parameters.

CONCLUSION: Plants are very good bioindicators as they can integrate the effects of all environmental factors such as interaction with air pollutants, climatic conditions etc. Present study reveals, that selected plants at Chinna Tirupathi were found to have APTI score below 16 and are sensitive to pollution thus these plants can act as indicator species.