POLYCYSTIC OVARIAN SYNDROME AND ITS METABOLIC CONSEQUENCES: A MINI REVIEW

POLYCYSTIC OVARIAN SYNDROME AND ITS METABOLIC CONSEQUENCES: A MINI REVIEW

ABSTRACT: Polycystic ovarian syndrome (PCOS) is a reproductive metabolic disorder affecting nearly 20% females, globally. Though Rotterdam consensus is widely used for assessment, it lacks definite diagnostic guidelines. Absence of PCOS guidelines for adolescent and post-menopausal women might be influencing the prevalence data. The prevalence varied with ethnicities and found high in urban than rural. Among women in reproductive age, the obese rural population also found vulnerable to PCOS, indicates the role of lifestyle factors in this syndrome. Erratic lifestyle predisposes to insulin resistance, or obesity leads to subsequent hyperinsulinemia and hyperandrogenemia. Also, genetic predisposition to hypothalamic pituitary gonadal (HPG) axis dysfunction and impaired ovarian steroidogenesis further influence the disorder. It dysregulates the oocyte maturation leading to polycystic ovaries, thereby, affects the normal ovarian functions. The environmental toxins which are endocrine disruptors further worsens the consequence of the disorder. Multiple factors make it difficult to decipher the independent pathway of pathogenesis. Apart from ovulatory and reproductive dysfunctions, PCOS have chronic metabolic consequences: cardiovascular disease (CVD), obesity, dyslipidemia, obstructive sleep apnoea, and non-fatty liver. These factors are interdependent and progressive. Since the studies have contradicting results; it’s difficult to determine the impact of these consequences. Both non-obese and obese PCOS women found vulnerable to the same metabolic consequences. Hence, further long term, controlled studies are required to understand the exact pathogenesis and metabolic consequences both in obese and non-obese PCOS women. Moreover, both regional and multicentre cohort studies are required to understand the progression of disease in different ethnicities.

Also, PCOS accounts for overweight, obesity, and anovulatory infertility 6. The anxiety of infertility is high among these patients and might influence their quality of life 7. Though numerous studies are being done in line with the etiology of PCOS, still the mechanism of pathogenesis and its metabolic impact remains variable and inconclusive. In that regard, this review tries to summarize the existing mechanistic evidence and metabolic consequences of PCOS and the possible avenues for future research.

Prevalence of PCOS: Azziz et al., report a 6.6% prevalence of PCOS in females aged between 18-45yrs 8. Similarly, a meta-analysis in 2015 revealed a prevalence ranging from 6.8%-19.5% across the globe 9. Another meta-analysis reports the prevalence of 5.6% in Chinese women, contrary to 16% among the women in the Middle East. Genetics, lifestyle factors environment, and ethnicities influence both the incidence and pathogenesis of PCOS 10, 11. Urban women have a high risk of PCOS compared to rural women 12, but among the rural population, obese participants account for the higher prevalence of PCOS 5. A higher proportion of adolescent school going girls from upper socio-economic status also suffers from PCOS 13. Poor lifestyle, irrespective of the region modulates the incidence of PCOS. These suggest the impact of lifestyle factors in this disease.

Even though epidemiological studies use different diagnostic guidelines for PCOS, Rotterdam consensus 2003 criteria are widely used. However, it is difficult to determine the exact prevalence because of the lack of gold standard diagnosis guideline 7. The  National Institute of Health (NIH) 2013, an update of the Rotterdam consensus 2003, provides clarity in diagnosis by classifying PCOS into 4 phenotypes: A & B( Classical), C & D, (see Table 1) 14. Nonetheless, the prevalence from most studies represent data from individuals visiting clinics rather than the general population and didn’t estimate the phenotypic distribution of PCOS. Moreover, lack of awareness and social stigmas might also influence the prevalence data, especially in developing countries.

Thecal cell culture secretes excess androgen in response to insulin and LH compared to non-PCOS thecal cell culture. Overexpression of steroidogenic enzyme CYP17 is seen in non-PCOS cells 38. It suggests an independent intrinsic effect of insulin in ovarian steroidogenesis, independent of obesity and T2DM, in PCOS women. Though proper etiology is unclear, insulin seems to have both independent and mediating roles in the pathogenesis of PCOS.

Role of 5α- Reductase: 5α-reductase reduces testosterone to dihydrotestosterone, which binds to the androgen receptor to form an androgen-receptor -dihydrotestosterone complex. This complex has a longer half-life and is more potent than androgen-receptor-testosterone complex39. High 5α-reductase levels associate with insulin resistance independent of obesity 40. A meta-analysis by Wu et al. demonstrates higher proportions of 5α-reductase metabolites in PCOS women compared to BMI matched controls. Moreover, subgroup analyses confirm the association of 5 α reductase with insulin resistance 41. 5α-reductase indirectly modulates hyperandrogenism; however, the exact mechanism is unclear. 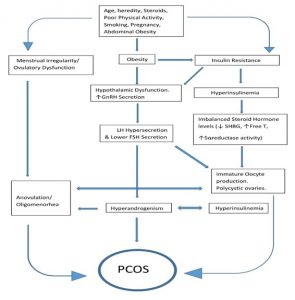 FIG. 1: A SCHEMATIC REPRESENTATION OF AETIOPATHOGENESIS OF POLYCYSTIC OVARIAN SYNDROME

Environmental Toxins: Endocrine disrupting chemicals (EDC) from the environment interferes with the hormone system. The serum concentration of bisphenol A (BPA) is elevated in PCOS women 42 and strongly associated with androgens 43. Elevated BPA levels can also be found in adolescent girls with PCOS 44.  BPA is present in polycarbonate plastics and it migrates to packed foods 45. Animal studies reveal neonatal exposure of BPA alters HPA axis and associated with the development of PCOS 46. In rat ovarian interstitial thecal cells, BPA induction modulates the enzymes responsible for ovarian steroidogenesis 47. BPA competitively binds with SHBG and displaces androgens leading to increased free testosterone levels 48.

In PCOS, both the quantity and quality of lipid changes. PCOS women have low HDL2, the anti-atherogenic HDL subtype, and high atherogenic small dense LDL-C. Both are independent predictors of cardiovascular morbidity and mortality 58. A meta-analysis in 2011 reveals, 26mg/dL (95% confidence interval [CI] 17-35) and 12mg/dL  (95% CI 10-16) increase in triglyceride and LDL-C levels in PCOS women than normal women along with  6 mg/dL (95% CI 4-9) decrease in HDL-C 59.  However, a recent meta-analysis by Amiri et al. contradicts that, no significant associations of testosterone with metabolic parameters of PCOS. However, after adjusting for age and BMI they found an association, but only with LDL (β = 0.006; 95 % CI: 0.002, 0.01) and HDL (β = –0.009; 95 % CI: –0.02, –0.001) 60. It suggests the independent influence of age and BMI in determining the metabolic consequences of PCOS and its importance in the course of cardiovascular diseases. Though the exact mechanism of dyslipidemia in PCOS remains clouded, studies suggest that obesity, hyperinsulinemia, and hyperandrogenaemia mediate its pathogenesis 61.

Obesity: Obesity affects the development and the progression of PCOS by influencing the severity of its associated metabolic disturbances. Android obesity is a specific risk factor for PCOS 62. Fat deposition in the abdominal wall and visceral mesenteric locations cause android obesity in an ovulating overweight women with excess androgens 63. Androgenic obesity, in turn, causes insulin resistance, glucose intolerance, diabetes mellitus, and high androgen production.

Evidence from a follow-up study shows an increase in the risk of OSA in PCOS women irrespective of their obesity status (adjusted HR = 2.26, 95% CI: 1.89–2.69, P<0.001) 90. A recent meta-analysis observes that PCOS women with OSA have metabolic abnormalities; however, the studies analyzed failed to decipher the independent effect of OSA 91. Though obesity and insulin resistance seems to be common mechanisms linked with OSA, it requires quality research for conclusive evidence 92.

Non-Alcoholic Fatty Liver Disease (NAFLD): Nearly 40% of women with PCOS have NAFLD 93, 94. Liver enzymes are elevated in PCOS women 95. Metabolic abnormalities and high androgen levels in PCOS are linked to an increase in liver enzymes 96. Insulin resistance, obesity, abdominal adiposity, and triglyceride are independent risk factors for NAFLD in PCOS women 97. However, meta-analysis observes that PCOS with NAFLD independently associates with hyperandrogenism than any other risk factors like obesity, insulin resistance, and triglycerides 98, 99. Kumarendran et al. found a similar observation where hyperandrogenism was the only independent factor that determines the course of NAFLD in PCOS women 100. Though hyperandrogenism is associated with NAFLD in PCOS women, the influence of obesity cannot be ruled out.

CONCLUSION: PCOS is a major reproductive metabolic disorder found in females during reproductive age. Its prevalence and incidence rate is increasing due to genetic, environmental factors, and improper lifestyle. Though impaired HPA axis, hyperinsulinemia, impaired ovarian steroidogenesis, and environmental toxins were hypothesized to be its pathogenesis, lack of a definite conclusion is evident. Several risk factors such as dyslipidemia, obesity, cardiovascular disease, obstructive sleep apnoea, and non-alcoholic fatty liver disease modulate metabolic abnormalities in PCOS.

The independent influence and inter-relationship of the risk factors in the course of the disease need further research. A long term longitudinal studies both in controlled and real-life settings might help in this regard. As the prevalence and its expression vary with ethnicities, regional-based assessment should be focused along with multicenter approach.

ACKNOWLEDGEMENT: The authors acknowledge the Indian Council of Medical Research (ICMR) for providing financial assistance as fellowship during the process of this manuscript. The content is solely the responsibility of authors and does not represent the official views of ICMR.

CONFLICT OF INTEREST: Authors declared no conflicts of interest.