ABSTRACT: The current scenario was to study Polyelectrolyte complex. Polyelectrolyte complexes (PECs) represent a special class of polymeric compounds consisting of oppositely charged polyions that can have either cationic or anionic charges. Due to their charges they are hydrophilic, and normally water soluble, and can be used in a variety of applications, such as drug delivery, coatings, shampoos, or as flocculating agents in water treatment. These complexes avoid the use of chemical cross linking agent thereby to reducing the risk of toxicity. These complex formed is generally applied in different dosage form. A number of different, polymers are used to form polyelectrolyte complex.  The present review emphasizes on the detail study on polyelectrolyte complex with their utility in drug delivery.

INTRODUCTION: The new techniques of drug delivery which makes the system capable of controlling the rate of drug delivery, sustaining the duration of therapeutic action and most focused on targeting the drugs to the specific sites have aroused as revolution in pharmaceutical field, thereby giving rise to the novel drug delivery system.1

Recent decades witnessed the appearance of polymers that respond in some desired way to change in temperature, pH, electric or magnetic field. These type of polymers not only covert the active substances into a non-deleterious form which can be administered, but also have a specific effect on the biodistribution, bioavailability or absorption of the active substances and hence increasingly gaining importance in pharmaceutical technology.2

Advantage of polyelectrolyte complex of chitosan with other polymers includes the avoidance of organic solvents, chemical cross-linking agents and thereby reducing the toxicity and undesirable side effects 5.The polyelectrolytes considered  all hydrophilic, excluding ‘‘ion containing polymers’’ that are water-insoluble, or polyamphiphiles that are hydrophobically modified 6. Chitosan is the deacetylated derivative of the natural polymer chitin (derived from crab and prawn shells) and hydrogels formed from this material are usually covalently cross-linked 7.Recently, the use of complexation between oppositely charged macromolecules to prepare chitosan beads (or microspheres) as controlled drug release formulation, especially for peptide and protein drug delivery, has attracted much attention because this process is very simple and mild 8. 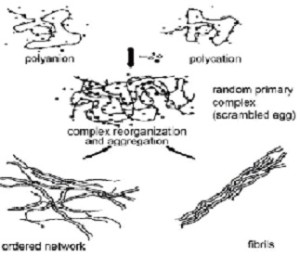 The efficiency of protein precipitation depends on the number and distribution of charged sites on the protein surface, number of polyelectrolyte, pH of the solution, ionic strength and polymer dosage

Formation of Polyelectrolyte Complex: The formation of polyelectrolyte complex is usually but not always independent of the mixing ratio of the two macromolecules and of the order of mixing. Unlike the mixing of the polyacids and a polybases, where neutralization results in a exothermic reaction, the binding between a polycation and a polyanion is nearly a thermal. The driving force of the complex formation is largely entropic owing to release of micro ions. Cooperative effects facilitates the ion pairing, since the formation of one cross linked promotes interaction of adjacent charges because of their force proximity. Hydrophobic interaction between polymer backbone of substituent contribute of the complex forming process 21.

The general conception is that the main driving force of complex formation is the gain in entropy caused by the release of low-molecular-weight counterions. Other interactions, such as hydrogen bonding and hydrophobic interactions, can also contribute to the complexation process (Figure 2) 22. Formation of polyelectrolyte complexes directly depends on the degree of ionization of cation- and anion-polymers, the density of charges, charge distribution over the polymer chain, concentration of polymers, and their ratio, as well as on the duration of the interaction and the temperature of the reaction medium 23.

The structure formation is mainly determined by the fast kinetics of the process (less than 5 µs, depending, for example, on the concentrations of polyelectrolytes and low-molecular-mass electrolytes), followed by a slower stage in which chains redistribute to a PEC conformation closer to equilibrium 24, 25.

Polyelectrolyte Complexes containing Chitosan: PECs formed by mixing polysaccharides of opposite charge have recently attracted considerable attention because of their potential for use in drug delivery systems as well as in various biotechnological applications. Among them, chitosan is currently receiving a great deal of attention for medical and pharmaceutical applications 16, 17. Chitosan is a natural cationic polysaccharide which derived by partial deacetylation of chitin, the second most abundant polysaccharides in nature next to cellulose 18.

Chitosan exhibits a pH-sensitive behavior as a weak polybases due to the large quantities of amino groups on its chain. Chitosan dissolves easily at low pH while it is insoluble at higher pH ranges. The mechanism of pH sensitive swelling involves the protonation of amine groups of chitosan under low pH conditions. This protonation leads to chain repulsion, diffusion of proton and counter ions together with water inside the gel and dissociation of secondary interactions.19 Formation of chitosan hydrogels by polyelectrolyte complexation is an interesting alternative to covalently cross-linked hydrogels. PECs are generally biocompatible networks exhibiting interesting swelling characteristics.

Structure and interaction: PECs are formed by reacting two oppositely charged polyelectrolytes in an aqueous solution, as shown in Figure 3. The electrostatic attraction between the cationic amino groups of chitosan and the anionic groups of the other polyelectrolyte is the main interaction leading to the formation of the PEC. It is stronger than most secondary binding interactions, such as those, for example, allowing formation of chitosan/polyvinyl alcohol (PVA) complexes or aggregation of grafted chitosan. 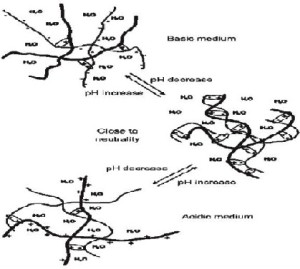 Since chitosan has a rigid, stereo regular structure containing bulky pyranose rings, the formation of PEC can induce a conformational change of the other polyelectrolyte, if the latter has a non-rigid structure, e.g. poly (acrylic acid), xylan or collagen. However, the influence of this change on the hydrogel or polyelectrolyte properties has not yet been studied 20.

Recent work done on Polyelectrolyte Complex: Bruno Sarmento et al., 36(2006), prepared Insulin-loaded nanoparticles by ionotropic pre-gelation of alginate with calcium chloride followed by complexation between alginate and chitosan. The inﬂuence of the pH and stoichiometry relationship between polyelectrolytes providing individual particles with a nano-scale size was assessed by photon correlation spectroscopy (PCS) and scanning electron microscopy (SEM). Insulin–polyelectrolyte interactions were assessed by diﬀerential scanning calorimetry (DSC) and Fourier-transform infrared (FTIR) studies. Individual and smaller sizing nanoparticles, around 800 nm, were obtained at pH 4.7 with an alginate:chitosan mass ratio of 6:1.

Lee SH et al., 37 (2007), developed a small interfering RNA (siRNA) delivery system with low cytotoxicity and high transfection efficiency, siRNA was conjugated to poly(ethylene glycol) via a disulfide linkage (siRNA-PEG) to prepare polyelectrolyte complex micelles (PECMs) by condensing with a cationic fusogenic peptide (KALA). The extent of gene silencing was gradually increased with increasing nitrogen to phosphate (N/P) ratio and the concentration of siRNA-PEG/KALA PECMs. These results suggest that the formulation of siRNA-PEG/KALA PECMs could be widely applied for intracellular delivery of various therapeutic siRNAs.

Shilan Chena et al., 38 (2008), were prepared drug-loaded chitosan (CS) beads under simple and mild condition using trisodium citrate as ionic crosslinker. The beads were further coated with poly(methacrylic acid) (PMAA) by dipping the beads in PMAA aqueous solution. The surface and cross-section morphology and In vitro release of model drug from these beads obtained.

According to this study, the ionic-crosslinked CS beads coated by PMAA could serve as suitable candidate for drug site-specific carrier in stomach.

F. Biguccia et al., 39 (2008), investigated the influence of polyelectrolyte complexes composed of chitosan and pectin on the release behaviour of vancomycin. Polyelectrolyte complexes between chitosan and pectin were prepared in various pH regions and at different molar ratios by mixing solutions of pectin and chitosan with the same ionic strength. They performed FT-IR spectra and TGA thermograms to study the degree of interactive strength between polyions. In vitro swelling, mucoadhesion and release tests were performed in order to investigate the chitosan/pectin complex ability in the delivery of vancomycin in the gastro-intestinal tract. The results suggested their possible use for colon-specific localization of vancomycin.

Naidu et al., 41(2009), prepared polyelectrolyte complexes (PEC) of gum kondagogu (GKG) and chitosan by mixing polymeric solutions of different concentrations (0.02–0.18% w/v). The complex formed were loaded with diclofenac sodium, and the release of the drug was measured in vitro and in vivo, along with the measurement of particle size, zeta potential and loading efficiency. They found that PEC showed lower release of diclofenac sodium in 0.1 N HCl as compared to phosphate buffer (pH 6.8). Increasing the concentration of gum kondagogu in PEC led to an increase in drug release.

Martin et al., 43 (2011), preparedpolyelectrolyte (PEL) complex (PEC) nanoparticles, by mixing solutions of the low cost PEL components poly(ethyleneimine) (PEI) and poly(acrylic acid) (PAC). It was found, that the size and internal structure of PEI/PAC particles can be regulated by process, media and structural parameters. Finally, dispersed PEI/PAC particles used as additives for the paper making process, as well as for drug delivery. Surface bound PEI/PAC nanoparticles were found to release a model drug compound and to stay immobilized due to the contact with the aqueous prepared release medium.

Utility of Polyelectrolyte Complex: People have extensively studied the PECs and their applications for the last forty years. At present, PECs are used for such large-scale industrial applications as flocculants, coatings, and binders and for special purposes in biotechnology and medicine 45. Promising fields include PEC-microencapsulation of drugs, enzymes, cells and microorganisms 46-48, immobilization of proteins by complex formation 49, 50 and polycation complexes with polynucleotides or oligonucleotides as vectors in gene therapy 51-54. Depending on their composition, PECs can be either insoluble or soluble in water. Insoluble PECs show unique efficiency as hydrophilic soil binders, preventing wind and water erosion. Such a PEC composition was used, for example, after the Chernobyl accident to suppress the formation of radioactive aerosols in contaminated dusty areas 55.

On an industrial scale, insoluble PECs have been demonstrated to be much more effective than the industrial polyelectrolytes in coagulating colloid dispersions, particularly slag wastes in metallurgy 56.  They have been also reported as biocompatible coatings for hemosorbents and other medical items in contact with blood and other biological fluids 57. The development of soluble PECs 58 allowed for a large range of prospective applications of PECs, related primarily to biomimetics, biotechnology and medicine 59-61.