Dendrimers are synthetic, highly branched, nanosized, monodisperse macromolecule which proving their applicability in different areas like diagnosis, drug delivery, gene delivery, molecular encapsulation etc. Due to their widespread applications, scientific community is continually engaged in developing newer dendrimers with advanced properties. In the present study, amino dendrimers are synthesized according to procedure given in literature and were utilized for its biocompatibility by observing the influence on RBCs. Along with this amino dendrimers were also utilized for their potential in drug delivery by performing solubilization and drug release studies of Methotrexate (MTX). Up to generation third (G3) dendrimers was prepared by divergent method taking PEG as a core which provides homogenesity during synthesis and increases the biocompatibility to biosystem. A preliminary investigation shows that amino dendrimers caused concentration and time dependent haemolysis which is less than that of amino surface dendrimers like PAMAM having no PEG molecules within it. The solubility of MTX increases to 4.68, 5.93, 8.21 and 11.42 folds for the 0.5, 1, 2, 3 mmol concentrations of G3 amino dendrimer respectively.  Stability studies show that the formulation (drug loaded amino dendrimers) is most stable in the dark at the room temperature.

INTRODUCTION: Dendrimers are synthetic, highly branched, spherical, nanosized, mono-disperse macromolecule which having a number of surface groups which can be modified accordingly 1. They combine typical characteristics of small organic molecules and polymers that results in special physical and chemical properties 2.

Dendrimers possess empty internal cavities which can be utilized for molecular entrapment and having many functional end groups which are responsible for high reactivity of dendrimers. Drugs, diagnostic agents or other molecules can either be attached to dendrimers end groups or encapsulated in the macromolecule interior 3. Despite of the above properties, dendrimers shows high molecular pay load, good colloidal, biological and shelf stability. Due to these unique properties, dendrimers have well proved their applicability in the field of biomedicine (DNA and gene delivery, cancer diagnosis) 4, as MRI agents 5 and in drug delivery 6 etc.

In the present study, we synthesized polyethylene glycol (PEG) supported amino dendrimer (dendritic triblock copolymer) according to the literature 7 and synthesized dendrimers were utilized for its biocompatibility (impact on RBC) and solubility study of MTX (Figure 1).

To establish the system as a drug delivery vehicle for anticancer drug, it must be given through i.v bolus route to directly blood stream where it first interacts with blood component mainly RBCs. Cationic dendrimers interact with RBCs due to electrostatic interactions.

The attempt has been made to synthesize the amino dendrimer with biocompatible PEG core to reduce the ultimate toxicity of the dendrimers. The PEG supported amino dendrimer having a number of surface amino groups which can interact with the RBC to change its shape. PEG was used for polymeric support because of its biocompatibility and synthesis on it improves the loading capacity than commercial available PEG. Due to the presence of long chain of PEG molecule, the dendritic block can be shield which reduces the toxicity, leakage and increases the loading capability of the molecules.

Materials: PEG3400 was obtained from Wilson Laboratory, Mumbai (India). Cyanuric chloride (2, 4, 6-Trichloro- 1, 3, 5-triazine, TCT) was purchased from Sigma-Aldrich, New Delhi (India). Dichloromethane, Acetyl chloride and ethylenediamine were purchased from Qualigens Fine Chemicals “A division of Glaxo SmithKline Pharmaceuticals Ltd (India); Di-tert-butyl dicarbonate was purchased from Specrochem, India. All other reagents and chemicals were of Analytical reagent grade and were used as received.

Synthesis of Amino Dendrimer: PEG supported amino dendrimers were synthesized according to procedure given by Cui-Fen et al., 7. According to the procedure PEG3400 was dissolved in benzene and reacted with 2, 4, 6-Trichloro-1, 3, 5-triazine (TCT) at low temperature. All contact with wet air was avoided. Evaporate the solvent and residue was dissolved in CH2Cl2 than wash with water and again extracted with CH2Cl2 to give generation G0.5 dendrimers. PEG supported dichloromethane (G0.5) than reacted with mono Boc substituted ethylenediamine in acetonitrile by refluxing for 12 h with stirring.

The product was purified with CH2Cl2 and than Boc group was removed to give G1 dendrimers. TCT and DIPEA were added to CHCl3 and stirred at 0°C. G1 dendrimer was dissolved in CHCl3 and added drop wise to the above solution, keeping the temperature below 5°C. After 1 h stirring, solution was stirred for another 4 h at room temperature than purified with CH2Cl2 to give G1.5 dendrimers. G2 and G3 were synthesized, as described for G1 and G2.5 was synthesized, as descried for G1.5. The characteristic data of different generations of amino dendrimers are listed in Table 1.

Hemolytic Toxicity of Dendrimer: The study was carried out on whole human blood, which was collected in Hi-Anticlot vials (Hi-Media, India). It was centrifuged at 3000 rpm for 15 min, RBCs were separated and washed with normal saline (0.9% w/v) until a clear, colorless supernatant was obtained above cell mass. The cells were resuspended in normal saline to obtain a hematocrit of 5%. To 1 ml of RBC suspension taken in centrifuge tube, 5 ml distilled water was added, which was considered as producing 100% hemolysis.

Similarly, 5.0 ml of normal saline was added to 1 ml of RBC suspension in another tube producing no hemolysis, hence acting as blank. To 1 ml of RBC suspension 0.5 ml of different concentrations (0.001mg/ml, 0.01mg/ml, 0.1mg/ml, 1mg/ml, 5mg/ml) were added in a separate tubes and volume was made upto 5 ml with normal saline. The tubes were allowed to stand for 1 h at 37°C with continuous shaking. All the tubes were then centrifuged at 3000 rpm for 15 min. The supernatant was taken and diluted with equal volume of normal saline and absorbance was taken at 550 nm. The degree of hemolysis was determined by the following equation:

Solubilization and Drug Loading Studies: Excess of drug was added separately into 5 screw-capped vials (10 ml) containing different concentrations (0.5 to 3 mM) of G3 amino dendrimer in double distilled water. Excess of drug was also added in a vial containing only double distilled water as control. Vials were shaken for 48 h in a metabolic shaker (Indian Equipment Corporation, Mumbai, India) at room temperature and allowed to stand for 24 h to attain equilibrium. Solutions were filtered using nylon membrane filter of pore size 0.45mm. After proper dilution, these solutions were analyzed in UV Visible spectrophotometer at 303 nm for determination of intrinsic solubility of MTX and drug loading in dendrimer formulations. Drug loading in dendrimer only can be determined by subtracting intrinsic solubility of drug from dendrimer formulation.

In- Vitro Drug Release Study: Drug release from known amounts of MTX loaded amino dendrimer (G3, 3mM) was determined using a modified dissolution method with necessary modification. The releasing medium used was the solution of PBS (pH 7.4). The dialysis bags (MWCO 3000 Da) were filled with a 1 ml of MTX loaded dendrimer and the dialysis bags were placed in 50 ml PBS (pH 7.4) at 37°C with slow magnetic stirring under sink conditions. One milliliter aliquots were withdrawn from the external solution and replaced with the same volume of fresh medium. The drug concentration was detected in a spectrophotometer at 303 nm.

Stability Studies/Leakage Studies: The samples of G3 (3mM) loaded with MTX formulations were analyzed after every week for upto 5 weeks. Precipitation, turbidity, crystallization, change in color, consistency and drug leakage were determined during the study. The formulation (5 mL) was kept in dark in amber colored vials and in colorless vials at 0 °C, room temperature (25-30°C) and 50°C in controlled oven for a period of five weeks. Drug leakage was determined spectrophotometrically by checking for increase in the drug release from the formulation after storage at accelerated condition 10. 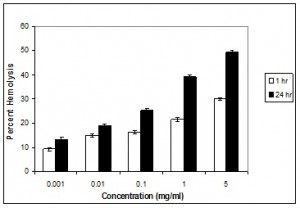 The shape change in red blood cells and the haemolysis induced by amino dendrimers suggest interaction with the erythrocyte membrane. The surface of a normal erythrocyte is negatively charged due to the presence of glycolipids and some glycated integral and peripheral proteins.

Electrostatic repulsion among red blood cells prevents their self-aggregation and adhesion to the walls of blood vessels 11. Amino dendrimers are cationic in nature due to amino group at the surface, interacts with RBCs by electrostatic interactions. It has been found that the dendrimers with cationic surface are usually more cytotoxic than anionic dendrimer. 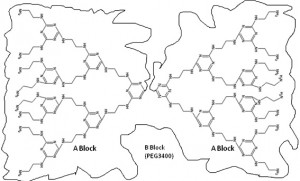 Solubilization and Drug Loading Studies: The solubility of MTX was found to increase with the higher concentrations of G3 dendrimer. The solubility increased to 4.68, 5.93, 8.21 and 11.42 folds for the 0.5, 1, 2, 3 mmol dendrimer concentrations respectively (Figure 5, Figure 6). The study was done in double distilled water having pH 7 as the drug was found to be more soluble in dilute solution of alkali and acid. Drug loading in dendrimers was confirmed by spectrophotometrically.

This was evident by a sufficient change in the λmax values of original MTX (303 nm in water), and for MTX entrapped dendrimer when estimated against dendrimer of same concentration. The drug loading increased with higher concentrations of G3 dendrimers, which was determined by dialysis through cellulose dialysis membrane (MWCO 3000) and estimating the amount of unentraped drug in external sink. The increased entrapment was possibly due to increased polymeric cavity in higher generations (G3). 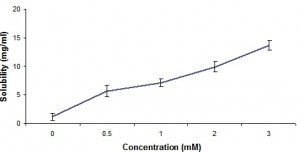 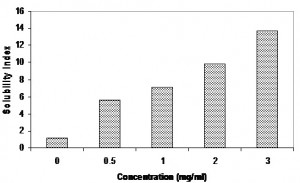 Electrostatic and hydrophobic interaction are the prominent mechanism for solubilization as the dendritic block have aromatic ring which provides hydrophobic environment for entrapment of hydrophobic drug molecules.

Along with this long chain PEG3400 may cause sealing effect to the open dendritic block which may prevents the drug leakage from the dendritic architecture (Figure 4).

Physical entrapment and association of dendrimers may also contribute for the solubility enhancement of the drug molecule. The drug release from dendrimer formulation was found to be non-linear (Figure 7) pattern and shows 91% of drug release after 24h. 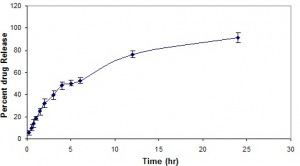 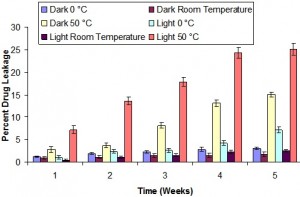 CONCLUSION: In conclusion, amino dendrimers were synthesized and found to be suitable for delivery of MTX. This drug delivery system could not only reduce the hemolytic toxicity but also controlling the release rate of MTX. The in vitro results show promising data which includes higher loading capacity with low leakage and low hemolytic toxicity but to establish the dendrimers as drug delivery vehicle it has to further screen for in vivo study.