INTRODUCTION: In recent years colon-targeted delivery systems have gained increased importance and interest since the colon is now considered as a suitable site not only for the local treatment of a variety of bowel diseases, but also for improving systemic absorption of drugs with problems of poor stability or irregular  absorption in the upper gastrointestinal tract 1.

Several methods have been developed for confining drug release to the colon. One of the oldest and the most commonly employed method uses enteric polymers as coating materials over tablets, granules, or pellets. These rely upon the difference in pH values in the gastrointestinal tract (GIT) 2. Others include time-controlled release systems 3, pressure controlled release systems 4, prodrugs 5, polysaccharide-based delivery systems 6, 7 and osmotically controlled release systems 8. Among the various systems developed for colon-specific drug delivery, prodrugs and polysaccharide-based delivery systems rely upon the enzymatic degradation of the carrier in the colon, thereby resulting in drug release. The inherent bacterial flora present in the colon carries out this enzymatic degradation.

The enzyme-trigger mechanism in such delivery systems makes them highly site specific. Prodrugs, however, can only be formed with a limited number of drug moieties due to a chemical linkage required in their formation. Further, as new chemical entities, prodrugs require a detailed toxicological study to be performed before being used as drug carriers.

Natural polysaccharides, including chitosan, guar gum, pectin, dextran, cyclodextrin, inulin etc. remain undigested in the stomach and small intestine and are degraded by the vast anaerobic microflora of the colon, e.g. bacteroides, bifidobacteria, eubacteria, clostridia to smaller monosaccharides, which are then used as energy source by the bacteria.

The present investigation is aimed at using the inexpensive, naturally occurring, and abundantly available polysaccharides for colon-targeted drug delivery. An attempt has been made to formulate a dosage that;

Working on this rationale, matrices were proposed for the above purpose. A drug release-retarding ingredient belonging to polysaccharides, i.e., xanthan gum, was selected for the study 10, 11.

Guar gum, another polysaccharide being widely used for colon targeting, was selected as the other ingredient. Guar gum (GG) alone has earlier been used in colon-specific drug delivery as matrix forming material and as a compression coat 12-14. Xanthan gum (XG) is known to have a greater drug release-retarding property and synergistically enhanced gel properties in presence of galactomannan gums such as guar 15.

So, a combination of these gums was proposed for achieving the above objective. A mixture of these gums was evaluated for its drug release-retarding properties under simulated gastrointestinal tract (GIT) conditions. This mixture was proposed to retard drug release more significantly in conditions of the upper GIT (as compared to guar alone) but still retained biodegradability due to the presence of guar gum. Xanthan gum is a high molecular weight polysaccharide gum produced by pure-culture aerobic fermentation with gram negative bacterium, Xanthomonas campestris. It contains D-glucose and D-mannose as the dominant hexose units, along with D-glucuronic acid. It is used in oral and topical pharmaceutical formulations as a suspending, stabilizing, thickening, and emulsifying Agent 10.

Guar gum is a natural nonionic polysaccharide derived from the seeds of Cyamopsis tetragonolobus (Family: Leguminosae). It consists of linear chains of (1–4)-beta-D-mannopyranosyl units with alpha-D-galactopyranosyl units attached by (1–6) linkages. It is used in pharmaceutical preparations in the form of binders and disintegrating, suspending, thickening, and stabilizing agents. Starch, usually a filler in the tablet dosage form, was used in the formulation to take advantage of its biodegradation in the colon by the resident bacteria 16.

Preparation of Tablets: Matrix tablets containing 200 mg of 5-ASA, xanthan gum (XG) and guar gum (GG) in varying ratios and their combinations (as per Table 1) were prepared by wet granulation using 10% starch paste as the binder. The wet mass was passed through an 8 mesh sieve and the prepared granules were dried at 45°C for 6 h. The dried granules were passed through a 16-mesh sieve and were lubricated with talc. The lubricated granules were compressed into tablets using 10 mm, circular, biconcave punches.

The in-process parameters like thickness, weight variation, friability etc. were optimised during compression for optimal performance of compression. The compressed matrix tablets were tested for hardness, drug content and drug release characteristics.

In-process characterization of Compressed Tablets: The hardness of all the formulations kept at a constant value. All other in-process parameters like weight variation, tablet thickness, friability etc. were kept uniform in all formulations for better evaluation of effect of change of polymer.

Dissolution: The dissolution study of the developed drug delivery system was planned on the basis of mimicking the body physiological condition. The media for dissolution is as follows: 1) 0.1M HCl for 2 hrs (mimicking gastric condition), 2) pH 6.8 phosphate buffer for 3 hrs (mimicking upper intestinal condition) and 3) pH 6.8 phosphate buffer with 2% fresh rat caecal contents for 8 hrs (mimicking colonic condition). Fresh rat caecal contents of rat were used after feeding guar gum and xanthan gum to them. The volume of media was kept 900 ml to maintain sink condition. The apparatus for dissolution used was rotating basket at 100 rpm. Aliquots were withdrawn at 1 hr interval from a zone midway between the surface of dissolution medium and top of the rotating paddle not less than 1 cm apart from the suitable replacements with fresh medium was also made. Each sample solution was filtered through Whatman no. 41 filter paper. The absorbance was measured after proper dilution with dissolution media at 302 nm for buffer pH 1.2 and 330 nm for buffer pH 6.8 and pH 6.8 with rat caecal content media using spectrophotometer.

In-process characterization of Compressed Tablets: Tablets of all the formulations were found to be of uniform hardness and in the range of 60-100N.  All other in-process parameters were also found to be uniform and with in the accepted range.

Dissolution: The result of the drug release study of all the formulations are given below in Table 2. 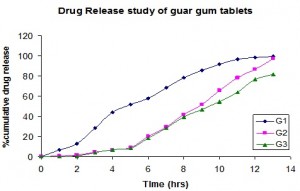 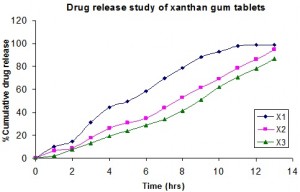 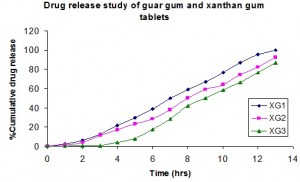 For the formulation of a delivery system for colon targeting, it is a prerequisite that the drug release should be minimal until the dosage form reaches the colon.

Also the result shows that the rat caecal matter has little effect on drug release property of xanthan gum tablets.

The formulation XG1, XG2 and XG3 show retarded drug release than the xanthan gum tablets, but they lack the rat caecal content effect on their drug release. The % of drug released in pH 6.8 phosphate buffer media is more than the guar gum microspheres. Also the XG3 formulation shows an incomplete drug release after 13 hrs which may be due to gelling property of the higher concentration of xanthan gum and guar gum.

Also there is a scope for other natural gums and their combinations which can be used suitably in different concentrations and in suitable dosage forms for developing colon targeted drug delivery systems.