The word herb, as used in herbal medicine, is also known as botanical medicine or as Phytotherapy or Phytomedicine which means a plant or plant part is used to make medicine to assist in the healing process during illness and disease. So there are many herbal remedies individually or in combination have been recommended in various medicinal treatises for the cure of different diseases. It contains various phytoconstituents belonging to alkaloids, glycosides, flavonoids, fixed oils, and carbohydrates. The roots of Pongamia pinnata are good for cleaning foul ulcers, cleaning teeth, strengthening gums and gonorrhoea. The root paste is used for local application in scrofulous enlargement. The fresh bark of Pongamia pinnata is sweet and mucilaginous to taste, soon become bitter and acrid. It is antihelmintic and useful in beri-beri, ophthalmology, dermatopathy, vaginopathy, and ulcers. Leaves of Pongamia pinnata are digestive, laxative, antihelmintic and are good for diarrhea, leprosy, dyspepsia and cough. Flowers are useful to quench dipsia in diabetes and for alleviating vata and kapha. The seeds are antihelmintic, bitter, acrid, haematinic and carminative. They are useful in inflammation, chronic fevers, anaemia and hemorrhoids. The oil is antihelmintic, styptic and recommended for opthalmia, leprosy, ulcers, herpes and lumbago. Its oil is a source of biodiesel.

INTRODUCTION: The ‘Pongam Tree’ is known as one of the richest and brightest trees of India. The tree is named as ‘Pongamia pinnata’ in science. The name ‘Pongamia’ has derived from the Tamil name, ‘pinnata’ that refers to the ‘Pinnate leaves’. The tree is a member of the ‘leguminosae’ family. Its sub family is ‘Papilionaceae’. In the Tamil, this is generally known as ‘Ponga’, ‘Dalkaramacha’, ‘Pongam’ and ‘Punku’. In both the languages of Hindi and Bengali, the people named it as ‘Karanj’ or ‘Papar’ or ‘Kanji’. It is called ‘Karum Tree’ or ‘Poonga Oil Tree’ in English. It is an Indo-Malaysian species, a medium-sized evergreen tree, common on alluvial and coastal situations from India to Fiji, from sea level to 1200 m. Now found in Australia, Florida, Hawaii, India, Malaysia, Oceania, Phillippines and Seychelles 1.

In the months of March and April, the ‘Pongam Tree’ stands as painted in crimson color for a week or so as the buds develop into wilted, new leaves and just after the leaves begin to grow mature, the tree attains a gorgeous glowing lime-green colour. The ‘Pongam Tree’ is being cultivated in a large number of gardens and along the countless roads in India and is becoming the one of the most admired city trees 2.

It grows wild in the coastal forests throughout India and beside the streams and rivers.  The ‘Pongam Tree’ is a medium-sized tree that grows rapidly. It contains a rough and grey-brown bark. The new leaves develop and the flower bloom in the great numbers almost simultaneously in this tree.  They remain half hidden in the midst of the leaves. The blossoms are 1.3cm in length and they mass along the ends of the long stems. These stems rise from the upper angle of the leaves. The flowers have a minute stem. They are loose and brown in color and also bear a calyx that is shaped as cups. There are five white petals as well as that are traced with the pink or violet color 3.  The fruits of ‘Pongam Tree’ are some timber-like pods that grow about in length. They are dark grey in color and get matured just before the next lot of new leaves appears. Each of the seeds of this tree is covered with a strong raft. The raft looks like a rubber ship. The ground underneath the tree always remains covered with a crackling carpet. The leaves of the ‘Pongam Tree’ have five, seven, or nine oval-shaped leaflets that have pointed tips 4.

The leaves are around 15 cm to 30 cm in the length and each of the leaflets is short stalked.  The leaf stems and the flower stems are normally puffy at their bases. It is one of the few ‘Nitrogen Fixing Trees’ producing seeds containing 30-40% oil. The present review will possibly help to the bridge between traditional claims and modern therapy on Pongamia pinnata 5.

Traditional Uses: It contains several phyto-constituents belonging to category flavonoids and fixed oils. The fruits and sprouts of Pongamia pinnata were used in folk remedies for tumors 7. Herbal remedies have been recommended in various medical treatises for the cure of different diseases. It has been recognized in different system of traditional medicines for the treatment of different diseases and ailments of human beings 8, 9. Seed extract of this plant has hypotensive effects and produce uterine contractions. Powdered seed is used in bronchitis, chronic fever, whooping cough and chronic skin diseases and painful rheumatic joints 10.

Seed oil is used in scabies, leprosy, piles, ulcers, chronic fever, lever pain and lumbago. Its oil is a source of biodiesel and it is also used as fuel for cooking and lamps 11. It has also alternative source of energy, which is renewable, safe and non-pollutant. Leaves are active against Micrococcus; their juice is used for cold, cough, diarrhoea, dyspepsia, flatulence, gonorrhoea and leprosy. Roots are used for cleaning gums, teeth and ulcers. Bark is used internally for bleeding piles.

Juices from the plant as well as oil are antiseptic. In the traditional system of medicines, such as Ayurveda and Unani, the Pongamia pinnata plant is used for anti-inflammatory 12, anti-plasmodial, anti-nociceptive, anti-hyperglycaemics, anti-lipidoxidative, antidiarrhoeal, anti-ulcer, anti-hyperammonic, CNS depressant activity 13 and antioxidant.

Phytochemistry: Pongamia pinnata seeds contain six compounds (two sterols, three sterol derivatives and one disaccharide) together with the eight fatty acids (three saturated and five unsaturated). Their structures were elucidated with the help of physiochemical methods and spectroscopic techniques. The metabolites, β-sitosteryl acetate and galactoside, stigma sterol, galactoside and sucrose are being reported for the first time. The saturated and unsaturated fatty acids (two monoenoic, one dienoic and two trienoic) were present in exactly the same amount. Oleic acid occurred in highest amount (42.44%), stearic (29.64%) and palmitic (18.58%) acids were the next in the quantity. Karangin (Fig. 1), pongamol, pongagalabrone, and pongapin, pinnatin and kanjone have been isolated from seeds. Immature seeds contain a flavone derivative ‘pongol’. The other flavonoid isolated from the seeds includes Glabrachalcone (Fig. 1), isopongachromene (Fig. 1). 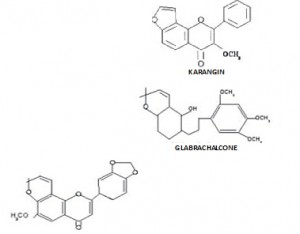 The leaves and stem of the plant consist of several flavone and chalcone derivatives such as Pongone, Galbone, Pongalabol, Pongagallone A and B. Chemical investigation of stems of the mangrove plant, Pongamia pinnata, resulted in isolation and characterization of five structurally unusual flavonoids metabolites. Their structures were determined on the basis of spectroscopic analyses and by comparison of their spectroscopy data with those of related compounds reported in the literature. Pongamones A-E was assayed against DHBV RCs DNAP and HIV-1 RT in vitro. A possible biogenetic pathway of the isolated compounds is also proposed 14.

Further investigation of the flavonoid constituents of P. Pinnata from Japan resulted in the isolation of 18 flavonoid compounds including nine new ones, Pongamones III-XI, from its root bark. The new structures were determined to be;

Pongamia pinnata fruits afforded three new furnoflavonoid glucosides, pongamosides- A- C and a new flavonol glucoside, pongamoside D. The structures of these compounds were established on the basis of spectroscopic studies. This is the first time that furanoflavone glucosides have been found as naturally occurring compounds. The title compound C18H12O4, known as pinnatin, is a furanoflavone isolated from Derris indica furanoflavone nucleus is almost planar. The phenyl ring is axially attached to the furanoflavone skeleton. The molecules are linked in zigzag manner through C-HO interactions into molecular ribbons along the b axis.

Pharmacological Activity: Anti-ulcer Activity: It has been reported that methanolic extract of Pongamia pinnata roots showed significantly protection against aspirin 16 4 h PL, but not against ethanol-induced ulceration. It showed tendency to decrease acetic acid-induced 17 ulcers after 10-day treatment. Ulcer protective effect of PPRM was due to augmentation of mucosal cells, mucosal cell glycoproteins, cell proliferation and prevention of lipid per oxidation rather than on the offensive acid-pepsin secretion 18.

Anti-diarrhoeal Activity: It has been evaluated that anti-microbial effect of crude decoction of dried leaves of Pongamia pinnata 19 and also evaluated its effect on production and action of enterotoxins (cholera toxin, Escherichia coli labile toxin and E. coli, stable toxin) and adherence of enteropathogenic  E. coli  and invasion of enteroinvasive E. coli and Shigella flexneri to epithelial cells. The decoction had no anti-bacterial, anti-giardial, and anti-rotaviral activities, but reduced production of cholera toxin and bacterial invasion to epithelial cells. The observed result indicated that decoction of Pongamia pinnata has selective anti-diarrhoeal action with efficacy against cholera and enteroinvasive bacterial strains causing bloody diarrhoeal episode

Anti-oxidant and Anti-hyperammonemic: It has been observed that effect of Pongamia pinnata leaf extract on circulatory lipid peroxidation and antioxidant status was evaluated in ammonium chloride-induced hyperammonium rats 20, 21. It enhanced lipid peroxidation in the circulation of ammonium chloride-treated rats was accompanied by a significant decrease in the levels of Vitamin- A, Vitamin-C, Vitamin-E reduced glutathione, glutathione peroxidase, superoxide dismutase and catalase. It showed that PPET modulates by reversing the oxidant-antioxidant imbalance during ammonium chloride-induced hyperammonemia and this could be due to its anti-hyperammonemic effect by means of detoxifying excess ammonia, urea and creatinine and antioxidant property 22.

Anti-plasmodial Activity: It has been reported that Pongamia pinnata is one the plant, which shows antiplasmodial activity against plasmodium falciparum 23.

Anti-inflammatory Activity: It has been reported that the 70% ethanolic extract of Pongamia pinnata 26, 27 leaves has potent anti-inflammatory activity against different phases (acute, sub- acute and chronic) of inflammation without side effect on gastric mucosa. They also observed significant anti-pyretic action of the extract against Brewer’s yeast-induced pyrexia 28.

Anti-viral activity: Viral inhibition studies with the extract of Pongamia pinnata seeds against HSV-1 and HSV-2 were evaluated in vitro. The most striking observation was the total inhibition of growth of HSV-1 and HSV-2 at concentrations of 1mg/ml and 20mg/ml w/v respectively, whereas even at the highest concentrations the extract was not toxic for Vero cells 29. Acute and Chronic toxicological studies conducted in Swiss albino rats showed the safety of the Pongamia pinnata seed extract 30.

Anti-bacterial Activity: It is reported that the leaves of Pongamia pinnata show antibacterial effect. It is clear that the extracts have great potential as antibacterial compounds against enteric pathogens and that they can be used in the treatment of enteric infectious 31. This plant can be used to discover bioactive natural products that may serve as leads for the development of new pharmaceuticals that address hither to unmet therapeutic needs. It is hoped that this study would lead to the establishment of some compounds that used to formulate new and more potent antimicrobial drugs of natural origin 32, 33.

The chloroform and methanol extracts were also successful in inhibiting nymph emergence and the petroleum ether extracts was the most effective with a complete inhibition of emergence. Water extract was devoid of both pediculocidal and ovicidal activities. All the results were well comparable with the benzoyl benzoate (25% w/v). These showed the prospect of using Pongamia pinnata leave extracts against Pediculus humanus Capitis.

CONCLUSION: In traditional system of Ayurvedic medicine Pongamia pinnata has been widely used as curative agents for variety of ailments. Concentrated fruits or seeds extract can be found in various herbal preparations are widely available in market today.  Pongamia pinnata preparation oil is widely available and employed by practioner of natural health for treatment of rheumatism. In the traditional systems of medicines, such as Ayurveda and Unani, the Pongamia pinnata plant is used for anti- inflammatory, anti- plasmodial, anti-nociceptive, anti- hyperglycaemic, anti- lipidperoxidative, anti- diarrhoeal, anti-ulcer, anti-hyperammonic and anti- oxidant, antibacterial. Its oil is a source of biodiesel. It has also alternative source of energy, which is renewable, safe and non-pollutant.