ABSTRACT: Histopathological changes in developing stomach caused by lead acetate exposure at different days of the postnatal development were investigated in Swiss mice. In this study, pregnant Swiss mice were exposed to 533 mg/kg BW of lead acetate from 10th day of gestation to 21st day of lactation. The pups of exposed groups were sacrificed at 1, 7, 14 and 21 day of lactation period, and the effects of lead on histopathology of developing stomach were observed. Results of the present study showed that administration of lead to pregnant mice caused histopathological change in the stomach of developing pups. It is concluded that lead adversely affects the normal histology of developing stomach in pups exposed during gestation and lactation but it could not delay the major events of postnatal development.

INTRODUCTION:Lead is a well-known environmental contaminant and its toxicity depends upon its concentration in various sensitive tissues and organs. Human and animal health is adversely affected by lead exposure 1. Lead has been used since a prehistoric time is an indestructible heavy metal that can accumulate and linger in the body. It has become widely distributed and mobilized in the environment. Human exposure and uptake of this non-essential element have consequently increased 2.Lead adversely affects survival, growth, reproduction, development, and metabolism of most species under controlled conditions, but its effects are substantially modified by numerous physical, chemical, and biological variables.

Radford in his epidemiological studies in long-term steel workers, found no increase in gastric and intestinal cancers compared to the rates in the general population 5. Cooper reported on the mortality of over 2000 men who worked for one year or more in lead-production facilities and found that the excess in cancer deaths was due largely to an increase in tumours of the digestive organs and respiratory system; the stomach and the large intestine were the most common sites 6.

There is a paucity of information available on the toxicity of lead on development of GI tract in Swiss mice.

Therefore, the present study was undertaken to find out the possible histopathological effects of lead acetate on the developing stomach of Swiss mice.

MATERIALS AND METHODS: Adult female Swiss mice weighing 28-30 gm were used in the present study. The experimental study was approved by the Institutional Animal Ethics Committee of the University no. CS/Res/07/759 and the guidelines of CPCSEA were followed. Animals maintained in well ventilated animal house constant 12 h. light and 12 h. dark schedule.

Animals were fed on standardized pellet diet and water ad libitum. Sexually mature males and females were kept in breeding cages for the mating. The cages were checked every day in the morning and females showing vaginal plug were isolated and duration of their gestation period were recorded.

The pregnant Swiss mice were separated in to 2 groups of 6 animals each to study the vulnerability of developmental stages.

These groups were treated with lead acetate orally once daily with the help of Canula during the period of experimentation.

The pups of these groups were sacrificed at postnatal day (PND) 1, 7, 14 and 21 and the stomach was dissected out and fixed in Bouins solution for histological study.

RESULTS: In the present study, the toxic effects of lead (533 mg/kg BW) on postnatal development of stomach were observed in Swiss mice on PND 1, 7, 14 and 21.

The stomach is divided into glandular and non-glandular components. The cellular architecture of the stomach is composed of four layers: the mucosa, submucosa, muscularis externa, and serosa.

The present study deals with the sequence of normal developmental changes that occur in the architecture of non-glandular stomach during postnatal period. The proximal portion, the non-glandular stomach occupies approximately two-third of the total surface area of the stomach. At the time of birth, squamous mucosa having keratinocytes which is lined by keratinized, stratified squamous epithelium and distinctly separated from the glandular stomach by the limiting ridge (Plate 1, Fig. A).

At 14th day of birth, there is no change in all developmental layers as they gradually increased but these layers are more prominent than previous stages (Plate 1, Fig. C)

The development of nearly entire part of non-glandular stomach is established during 21st day of postnatal period. Keratinocytes can be arranged in squamous mucosa. Both layers of muscularis externa can be clearly distinguished (Plate 1, Fig. D).

Histopathological changes in postnatal development of stomach exposed to lead: Histopathological analysis of stomach shows alterations when compared to control. At the time of birth, keratinocytes are swelled and their number also increased. Degenerative changes occur in submucosa and hyperplasia in squamous mucosa. This group also show thickened muscularis externa. (Plate 2, Fig. A).

At 7th day of birth, this group shows hypertrophy in keratinocytes and shrinkage in squamous mucosa. Both layers of muscularis externa are thick (Plate 2, Fig. B).

At 14th day of birth, hypertrophy occurs in squamous mucosa and keratinocytes. Muscularis externa is necrotic and submucosa is thickened (Plate 2, Fig. C).

Disappearance in keratinized layer of squamous epithelium is present during 21st day of lactation and number of keratinocytes is reduced. Muscularis externa is also highly proliferated (Plate 2, Fig. D). 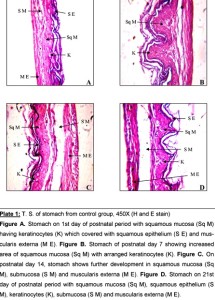 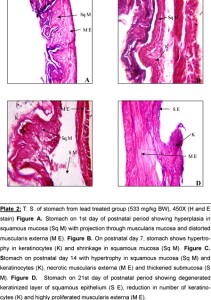 DISCUSSION: Lead poisoning can cause a variety of symptoms and signs which vary depending on the individual and the duration of lead exposure 7, 8. Gestational lead exposure has many adverse effects on development; a few of them may be most pronounced during the first trimester 9.

The stomach histology is greatly influenced by toxicity of lead. Since the gastrointestinal mucosa is the first target organ of lead exposure and intestinal inflammatory cells are responsible for providing protection against pathological damage caused by the toxicity. This histological structure is not altered even in experiments in which fish were fed food containing heavy metals 10.

The results of the histopathology of stomach in present study showed that lead induced swelling of keratinocytes and hypertrophy in squamous mucosa with hyperkeratosis in squamous epithelium at the time of birth. At 7th day of lactation, stomach showed hyperplasia in squamous mucosa and keratinocytes. Hyperkeratosis also occurred in squamous epithelium. The present study also investigated that keratinocytes reduced in number as they increasing age. All these results demonstrate that oral exposure to lead induced hypertrophic response in the developing gastrointestinal tract of exposed pups.

Pathological or accidental cell death is regarded as necrotic and could result from extrinsic insults to the cell such as osmotic, thermal, toxic and traumatic effects 12. In this experiment, lead acetate could have acted as toxins to the developing stomach. The process of cellular necrosis involves disruption of membrane’s structural and functional integrity which was also a landmark of this experiment.In a recent study, Sharma and Barber 13 investigated that the alterations in cellular changes of the villi during birth up to the lactation in the developing mice after administration of lead.

In cellular necrosis, the rate of progression depends on severity of environmental insults. With greater severity of insults, more rapid progression of cellular injury was observed 14. The principle holds true for toxicological insults to the brain and other organs 15. It is also inferred from the present results that exposure to lead acetate during the period of gestation and lactation resulted in teratogenic effects on the developing stomach of neonate Swiss mice and with that of higher dose were more noticeable.

In a recent study, Tarasub et al., 16 investigated that Cd-induced swelling of gastric mucosa, including the infiltration of inflammatory cells into the lamina propria. Similar report suggested by Olaleye 17 who observed that exposure of rats to lead significantly increased the gastric mucosal damage caused by acidified ethanol.

Sastry and Gupta 18 reported that the effect of a sublethal concentration (6.8 mg/liter) of cadmium chloride on the histological structure of the different parts of the alimentary tract in teleost fish, Heteropneustes fossilis, was observed as erosion of mucous epithelium in the stomach. Excess of manganese in the gastrointestinal tract produces functional and structural alterations in the mucosal cells of Guinea pig. 19.

We also observed degenerative changes in submucosa and distorted muscularis externa during postnatal period in Swiss mice. According to Mobarak and Sharaf 20, the atrophy of the submucosal zone, microvilli loss and inflammation observed in stomach of lead exposed fish suggested a possible irritant and/or toxic activity by lead acetate, which probably lead to the inflammatory response in the stomach submucosa. It was investigated that lead increases the formation of gastric ulcers by interfering with the oxidative metabolism in the stomach that increased incidence of gastric ulcer 17.

The implication of this is that lead causes an increase in the formation of free radicals, which, if not mopped up by free radicals scavengers, will expose the stomach to inflammation and gastric mucosal damage. These adverse effects of lead as well as its inhibition of enzyme activities might be the main inducer of the obtained intestinal histopathological damage of the exposed mollies 21.

It was reported that lead exposure causes generation of reactive oxygen species (ROS) and increased the level of lipid peroxidation this condition leads to disruption of the delicate pro-oxidant/antioxidant balance within cell, alteration of antioxidant defence system in animals and aggravates its pathogenesis 22, 23.

CONCLUSION:From the present study, it can be concluded that lead exposure on 10th day of gestation (the period of organogenesis) is lethal to the postnatal development of stomach of mice neonate.

Lead is suspected to cause disturbance in hypothalamic-pituitary axis indicates that lead exposure during this period places the animal at significant risk. Early-life exposure may induce changes that could be dangerous for future life.

We are very thankful to the Department of Zoology, University College of Science, Mohanlal Sukhadia University, Udaipur (Raj.) India, for providing all the basic facilities required to complete this piece of research work.