ABSTRACT: Diabetes or Madhumeha as per Ayurveda is a disease in which there is improper functioning of insulin and as a result, the sugar level in the blood increases. Diabetes may cause heart problem, kidney failure, blurred vision if not treated timely with proper medication. Medicinal plants have been used since ancient times for the treatment and management of diabetic mellitus (DM) in traditional medicine systems of many cultures throughout the world. Traditional Medicines derived from medicinal plants are used by about 60% of the world’s population. Recently, the World Health Organization (WHO) recommended the use of medicinal plants for the management of DM and further encouraged the expansion of the frontiers of scientific evaluation of hypoglycemic properties of diverse plant species. This review focuses on Indian Herbal drugs and plants used in the treatment of diabetes, especially in India.

INTRODUCTION: Diabetes mellitus is increasing alarmingly worldwide and is defined as the abnormal glucose tolerance, which affects pancreatic beta cells functions and sensitivity leading to the progression of diabetes and its related complications. It is a chronic disorder of carbohydrate, fat, and protein metabolism characterized by increased fasting and postprandial blood sugar level and an increased risk of vascular complications. Anti-diabetic drugs treat diabetes mellitus by lowering glucose levels in the blood. Though different types of oral hypoglycaemic agents are available along with insulin for the treatment of diabetes, there is increased demand by patients to use natural products with antidiabetic activity.

Diabetes mellitus is one of the common metabolic disorders characterized by hyperglycemia due to an absolute or relative deficiency of insulin and results in significant morbidity and mortality. Diabetes, by itself, increases the production of tissue-damaging oxidative stress 1. Therefore, in diabetes, the oxidative stress is referred to as a case of double jeopardy for any beta cells that survive the disease.

Type I diabetes (insulin dependent) is caused due to insulin insufficiency because of lack of functional beta cells. Patients suffering from this are therefore totally dependent on an exogenous source of insulin while patients suffering from Type II diabetes (insulin independent) are unable to respond to insulin and can be treated with dietary changes, exercise and medication 2. Type II diabetes is the more common form of diabetes, constituting 90% of the diabetic population.

Gestational diabetes(GDM) has been defined as any degree of glucose intolerance with onset or first recognition during pregnancy, to differentiate it from pre-diagnosed type 1 or type 2 diabetes or maturity-onset diabetes of the young (MODY) in women that get pregnant. Pregnancy is a condition characterized by progressive insulin resistance that begins near mild pregnancy and progressive through the third trimester. The placenta produces human chorionic somatomammotropin (HCS, formerly called human placental lactogen), bound and frees cortisol, estrogen, and progesterone. HCS stimulates pancreatic secretion of insulin in the fetus and inhibits peripheral uptake of glucose in the mother. As the pregnancy progresses and the size of the placenta increases, so does the production of the hormones, leading to a more insulin resistant state. Patient with GDM is at higher risk for excessive weight gain, preeclampsia, and cesarean sections. Infants born to mothers with GDM are at higher risk for macrosomia, birth trauma, and shoulder dystocia 2. After delivery, these infants have a higher risk of developing hypoglycemia, hypocalcemia, hyperbilirubinemia, respiratory distress syndrome, polycythemia, and subsequent obesity, and type 2 diabetes. So management of GDM is very important 4.

Pathophysiology: Many tissues contain insulin receptors to which insulin binds reversibly. The biological response of insulin can be altered by either a change in receptor affinity for insulin or a change in the total number of receptors. Changes in the receptors can occur due to obesity and chronic exposure to high insulin levels. Both lead to an increase in the number of receptors, down-regulation. An acute deficiency of insulin leads to unstrained hepatic glycogenolysis and gluconeogenesis with a consequence increase in hepatic glucose output 5. Glucose uptake is decreased in insulin-sensitive tissues & hyperglycemia ensures. Metabolic disturbances, infection, or acute illness increase the secretion of counter-regulatory hormones glucogon, cortisol, catecholamine, and growth hormone. All these will further increase hepatic glucose production. Most of the carbohydrates in food are converted within a few hours to the monosaccharide glucose, the principal carbohydrate found in blood and used by the body as fuel 6. 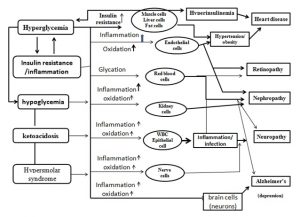 The most significant exceptions are fructose, most disaccharides (except sucrose and in some people lactose) and all more complex polysaccharides, with the outstanding exception of starch.

Insulin is released into the blood by beta cells (β-cells) found in the Islets of Langerhans in the pancreas, in response to rising levels of blood glucose, typically after eating. Insulin is used by about two-thirds of the body's cells to absorb glucose from the blood for use as fuel, for conversion to other needed molecules, or storage. Insulin is also the principal control signal for the conversion of glucose to glycogen for internal storage in liver and muscle cells. Lowered glucose levels result both in the reduced release of insulin from the beta cells and the reverse conversion of glycogen to glucose when glucose levels fall 7. 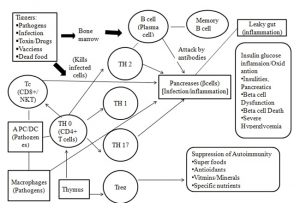 Treatment of Diabetes Mellitus: Controlling blood sugar (glucose) levels is the major goal of diabetes mellitus treatment to prevent complications of the disease. Type- 1 diabetes is managed with insulin as well as dietary changes and exercise. Type-2 diabetes may be managed with non-insulin medications, insulin, weight reduction, or dietary changes. Diabetes mellitus may also be managed by lifestyle changes. Antidiabetic drugs are those drugs which lower blood glucose levels and are effective orally 8.

Recent Advancement in Diabetes Mellitus: Advances in diabetes technology have helped to improve the outcomes of the management of T1DM.

Intranasal Insulin Delivery: soluble insulin administered intranasally is rapidly absorbed when given along with a detergent substance to facilitate adsorption. A single dose of intranasal insulin acutely improved memory in memory-impaired older adults with AD or mild cognitive impairment (MCI) and also improved memory and cognitive function with multiple treatments of patients with AD or MCI 9.

Insulin Pumps and Continuous Subcutaneous Insulin Infusion: insulin pump devices have become smaller and increasingly more sophisticated in their functionality. Insulin is delivered through a cannula placed subcutaneously and replaced with a 72 h frequency 10. Insulin pumps have Rapid-acting insulin analogs are not approved for use in pregnancy. Intensive diabetes management can be achieved in children, adolescents, and adults, either with the use of continuous subcutaneous insulin infusion or with multiple daily injections 11.

The three Food and Drug Administration (FDA)-approved CGM systems all use the subcutaneous space and measure glucose in interstitial fluid (IF). CGM use in all age groups over time.

Herbal Drugs Used for the Treatment of Diabetes:

(1) Acacia arabica (Babhul): The plant extract acts as an antidiabetic agent by acting as a secretagogue to release insulin. Powdered seeds of Acacia arabica when administered (2, 3 and 4 g/kg body weight) to normal rabbits induced hypoglycemic effect by initiating the release of insulin from pancreatic beta cells 13. This plant contains polyphenols, tannins, and flavonoids (for example, quercetin). The presence of these substances with antioxidant properties is an explanation for the anti-diabetic effects of this plant.

(2) Aegle marmelos (Bengal Quince, Bel or Bilva): Administration of aqueous extract of leaves improves digestion and reduces blood sugar and urea, serum cholesterol in alloxanized rats as compared to control 14. Along with exhibiting hypoglycemic activity, this extract also prevented the peak rise in blood sugar at 1h in oral glucose tolerance test. It cleans and tones up the intestines. Aegeline has antihyperglycemic and anti-hypercholesterolemic action. Phytoconstituents with varied chemical structures including cinnamides like aegeline, coumarins like umbelliferone, furanocoumarins like imperatorin, psoralen and xanthotoxin and others such as limonene, auraptene, etc. 15

(4) Allium sativum (Garlic): Allicin, a sulfur-containing compound is responsible for its pungent odor and it has been shown to have significant hypoglycemic activity. Aqueous homogenate of garlic (10 ml/kg/day) administered orally to sucrose fed rabbits (10 g/kg/day in water for two months) significantly increased hepatic glycogen and free amino acid content, decreased fasting blood glucose, and triglyceride levels in serum in comparison to sucrose controls 17.

(6) Azadirachta indica (Neem): Hydroalcoholic extracts of this plant showed anti-hyperglycemic activity in streptozotocin-treated rats, and this effect is because of the increase in glucose uptake and glycogen deposition in isolated rat hemidiaphragm. Azadirachta indica p<0.05 21.

(9) Coccinia indica: Dried extracts of Coccinia indica (C. indica) (500 mg/kg body weight) were administered to diabetic patients for 6 weeks. These extracts restored the activities of enzyme lipoprotein lipase (LPL) that was reduced and glucose-6-phosphatase and lactate dehydrogenase, which were raised in untreated diabetics 25.

Extract of Coccinia contains triterpenes, alkaloid, flavonoid, B-carotene, which is responsible for the hypoglycemic activity.

(10) Neugenia jambolana (Indian Gooseberry, Jamun): Antihyperglycemic effect of the aqueous and alcoholic extract, as well as a lyophilized powder, shows a reduction in blood glucose level. In mild diabetes (plasma sugar >180 mg/dl) it shows 73.51% reduction, whereas in moderate (plasma sugar >280 mg/dl) and severe diabetes (plasma sugar >400 mg/dl) it is reduced to 55.62% and 17.72% respectively 26. The seeds are claimed to contain alkaloid, jambosine, and glycoside jambolin or antimellin, which halts the diastatic conversion of starch into sugar and seed extract has lowered blood pressure by 34.6%, and this action is attributed to the ellagic acid content 27.

(11) Mangifera indica (Mango): The leaves of this plant are used as an antidiabetic agent in Nigerian folk medicine, antidiabetic activity was seen when the extract and glucose were administered simultaneously and also when the extract was given to the rats 60 min before the glucose 28. Mango is a rich source of various polyphenolic compounds, mangiferin.

(12) Momordica charantia (Bitter Gourd): Extracts of fruit pulp, seed, leaves, and the whole plant was shown to have hypoglycemic effect in various animal models 29. The active constituents are momocharin and momordicin, which is believed to possess insulin-like chemical structure and properties.

(13) Ocimum sanctum (Holy Basil): The aqueous extract of leaves of Ocimum sanctum showed a significant reduction in blood sugar level in both normal and alloxan-induced diabetic rats 30. Oral administration of plant extract (200 mg/kg) for 30 days led to a decrease in the plasma glucose level by approximately 9.06 and 26.4% on 15 and 30 days of the experiment, respectively. Eugenol has been found to lower the blood glucose level.

(16) Trigonella foenum graecum: (Fenugreek) 4-hydroxyleucine, a novel amino acid from fenugreek seeds increased glucose-stimulated insulin release by isolated islet cells in both rats and humans 34. Oral administration of 2 and 8 g/kg of plant extract produced dose-dependent decrease in the blood glucose levels in both normal as well as diabetic rats. The P-values, less than or equal to 0.05 (P≤0.05), has been fixed as the level of significance.

Besides, tinosporin, isocolumbin, palmatine, tinocordiside, cordioside, and β-sitosterol compounds present in stem and root, which are also reported to possess antidiabetic, antihyperlipidemic, and antioxidant properties.

(18) Camellia sinensis (Green Tea): The effects of a green tea catechin-enriched extract on lipid and glucose homeostasis and decipher its probable mode of action by using the fructose-fed Hyper-triglyceridemic insulin-resistant golden Syrian hamsters as an animal model.

Oral administration of a green tea extract is capable of improving glucose and lipid metabolism in an insulin-resistant hamster model induced by a high-fructose diet 36. It contains alkaloids.

(19) Brassssica juncea: The aqueous seed extract of Brassica juncea has potent hypoglycemic activity in the male albino rat. Isorhamnetin has been reported to be the major antidiabetic flavonol of Brassica juncea. Statistical significance * P<0.001 37.

CONCLUSION: Diabetes mellitus is a syndrome, initially characterized by loss of glucose homeostasis resulting from defects in insulin secretion, insulin action both resulting in impaired metabolism of glucose and other energy-yielding fuels such as lipids and proteins. Many traditional plant treatments for diabetes are used throughout the world. Plant drugs and herbal formulations are frequently considered to be less toxic and free from side effects than synthetic ones.

From this, we know that aqueous extract of some plant was significantly decreased in the level of SGPT, SGOT. Main plants are Azadirachta indica, the bark of Semecarpus anacardium exhibit p<0.05. The ethanol extract of Pterocarpus marsupium blood glucose by p<0.001, so it is more effective than others.