ABSTRACT: The present study showcases a screening program for the hunt of potent antibacterial compounds from cyanobacteria. A total of 108 cyanobacterial samples, from different habitats of the Jabalpur town of Central India, were collected which finally yielded 20 unialgal cultures belonging to ten genera. Ethanolic extracts from seventeen out of twenty cyanobacterial dried masses showed potent antibacterial activity against five human pathogenic bacteria, which included three Gram negative and two Gram positive bacteria. The minimum inhibitory concentration ranged between 0.05 to 5µg dry weight equivalent for most of the cyanobacterial extracts. Extracts from Nostoc calcicola EBRS001 and Fischerella ambigua EBRS002 were the most potent against all tested bacteria.

INTRODUCTION: Cyanobacteria are a very old group of organisms and represent relics of the old photoautotrophic vegetation in the world that occur in freshwater, marine and terrestrial habitats. Further, cyanobacteria have emerged as a rich source of many useful secondary metabolites that are biologically active 1.Various strains of cyanobacteria are known to produce intracellular and extracellular metabolites with diverse biological activities such as anti-algal, antibacterial, antifungal and antiviral activity. Screening of cyanobacteria for antibiotics and other pharmacologically active compounds, has received ever-increasing interest as a potential source for development of new drugs 2.

Cyanobacteria from local habitats seem to be a source of potential new active substances that could contribute to a reduction of the number of bacteria, fungi, viruses and other microorganisms. Earlier screening programs from various parts of India as well as the other countries have identified potential of collected cyanobacterial genera to encounter a variety of microbes.

Cyanobacteria samples were collected from different habitats in Jabalpur, Central India during January 2013 to December 2014. In total 108 cyanobacterial samples were collected from benthic, planktonic, terrestrial and epiphytic habitats. The cyanobacterial samples were cultured directly in BG-11 media. Once growth is observed, colonies or filaments were transferred to the same medium. Unialgal cultures were prepared using sub-culturing methods. Each isolated cyanobacterium was cultured in a 500 ml flask containing 150 ml of BG-11 medium without shaking for 30 days. The incubation temperature was 28 ± 2°C and illumination of 3000 Lux with a white continuous light except for Microcystis sp. which were incubated at 22 ± 2°C with continuous stirring. Finally, 20 unialagal cultures were established for further studies.

For preparing cell extracts, the cultures from 20 L batches were harvested after 30 days by centrifugation at 5000 x g for 15 min. The cells were freeze-dried and stored at 4°C until used. For the extraction of antimicrobial compound(s), 100 mg freeze dried cells were extracted thrice with 100 ml absolute ethanol with constant stirring. The cell suspension was centrifuged (20,000×g, 30 min) and the supernatant was evaporated to dryness. The residue was redissolved in 1 ml of absolute ethanol 7. From this stock solution (100 mg ml-1), 2.5 µl (equivalent to 250 µg dry weight of the cyanobacterium) was used for screening of antibacterial activity.

Since there is no report on level of antibacterial substance(s) in the culture, the criteria to determine the antibacterial sensitivity was the extracted dried mass. The antibacterial activity of the isolated cyanobacteria ethanol extracts was evaluated against five clinically important bacteria, i.e. Staphylococcus aureus ATCC 25923, Bacillus cereus ATCC 10876, Escherichia coli ATCC 35218, Pseudomonas aeruginosa ATCC 27853, Salmonella enteric serovar typhimurium ATCC 13311. The cultures used in the study were not more than 4 passages old from the master culture. The test organisms were sub-cultured in nutrient broth for 2-8 h before the test.

The antibacterial tests were performed by agar well diffusion method 8 using Mueller Hinton agar plates. The solidified plates were swabbed with 0.1 ml of each test organism’s broth (turbidity equivalent to 0.5 McFarland) in respective plates. Wells of 6 mm were punched using well punching machine at equal distance and the well was loaded with 50 μl extracts of cyanobacteria. On each plate, 50 µl of absolute ethanol served as negative control. Ampicillin (100 µg disc) was used as positive control on separate plates for each tested bacteria.

The extracts showing positive results against any given bacteria were subjected to identification of minimum inhibitory concentration (MIC). For this, different dilutions of cyanobacterial extract in ethanol corresponding to the concentration of 5000, 500, 50, 5 and 0.5 and 0.05 µg dry weights per well were used. In different data sets, the MIC was identified as the least dilution that showed no visible growth over a period of 48 h on the plates when the tests bacteria were inoculated in the medium containing extracted biomass.

In the present study, cyanobacteria were isolated from different regions of the Jabalpur area of Central India (Fig. 1). In total, 108 samples of different cyanobacteria from different habitat were collected, out of which 20 unialgal cultures were isolated (Table 1). These unialgal cultures belonged to ten genera, which were identified based on their morphological features according to 9 10. Cyanobacterial isolates; Nostoc calcicola EBRS 001 and Fischerella ambigua EBRS002 were further identified using 16S rDNA technique (data not shown). These genera include Nostoc, Fischerella, Calothrix, Oscillatoria, Anabaena, Lyngbya, Microcystis, Gleocapsa Hapalosiphon and Cylindrospermum. The morphological features of the unialgal cultures are shown in Fig. 2. 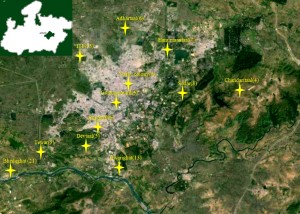 TABLE 1 COLLECTION SITES AND SOURCE OF CYANOBACTERIA FROM DIFFERENT HABITAT. 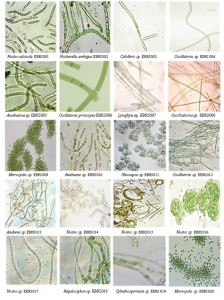 FIG. 2: UNI-ALGAL CULTURES ISOLATED FROM CENTRAL INDIA.The cyanobacteria were cultured and screened for their antibacterial activities against five human pathogenic bacteria. As showed in Table 2, the ethanolic extract of 17 isolated cyanobacteria out of 20 were found to inhibit all the test bacteria, though the degrees of inhibition varied. The results are presented as the mean size of the zone of inhibition for three replicates. Standard deviation is also reported. Concerning the potential of antibacterial effects, the results clearly indicate that extracts of Nostoc calcicola EBRS 001 (0.5 µg) and Fischerella ambigua EBRS002 (0.05 µg) showed lowest MIC on dry weight basis against all tested bacteria. Calothrix species EBRS 003 showed MIC of 50 µg equivalent dry weight against Pseudomonas aeruginosa ATCC 27853 and against both the Gram positive bacteria. Three species of Oscillatoria showed different degrees of inhibition against all test bacteria, while Oscillatoria principes EBRS 006 (MIC =0.05 µg dry weight) was able to inhibit Escherichia coli ATCC 35218. Microcystis sp. EBRS 009 (MIC =5 µg dry weight) was able to inhibit Salmonella typhimurium ATCC 13311.

DISCUSSION: Cyanobacteria are rich sources of many useful products and are known to produce a number of bioactive compounds, including the diverse taxa from Central India 1,6 . Further, antibacterial activity of cyanobacterial extracts have been shown by a large number of studies belonging to a large number of cyanobacterial genera. In other screening program from Tamilnadu, India, Madhumathi et al. 11 showed that five diverse cyanobacterial genera were able to encounter bacteria like B. subtilis, S. aureus, S. mutans, E. coli, M. mutans,  Klebsiella pneumonie and Candida albicans in their ethanolic and acetone extract. Reehana et al.8 showed the antibacterial activity of three cyanobacterial species from India, isolated from both marine and fresh water and were able to inhibit pathogenic bacteria i.e. Escherichia coli (MTCC 2939), Staphylococcus aureus (MTCC 96), Shigella sp., Pseudomonas aeruginosa (MTCC 2453) and Klebsiella pneumonia. Their study also highlighted that ethanol extracts were more effective against both gram positive and negative bacteria.

The antimicrobial compounds from cyanobacteria include a structurally diverse group of compounds that include cyclic peptides, phenolic group compounds, fatty acids and linear peptides 12. The present study deals with Axenic and/or unialgal cyanobacterial cultures and standard test bacteria to rule out erratic and false results arising out due to the different environmental conditions of the cyanobacteria as well as resistance patterns of test organisms. Further, the results indicate that the cyanobacteria have a vast antibacterial activity, even when used in concentrations as low as 0.05 µg dry weight equivalent.

Antibacterial activity of cyanobacteria isolated from diverse habitats of Central India has not been studied and this screening program is the first for comparative assessment of antibacterial activities. The other recent investigations where cyanobacteria have demonstrated the antibacterial effects of Nostoc and Fischerella 13, Anabaena, Oscillatoria, Synechocystis, Oscillatoria angustissima 14  and Calothrix parietina extracts against pathogenic bacteria 15.

Cyanobacteria are a promising but still unexplored natural resource possessing many bioactive compounds useful for the pharmaceutical, food and cosmetic industry. Because of their structural diversity and different mode of action against pathogens make them invincible tool for search of new and potent antibacterial drugs. The present study showcases the preliminary investigation of antibacterial activity of cyanobacteria from Central India. This merits further and more detailed investigations in this direction.