ABSTRACT: Purpose: Several medications are currently available for trying smoking cessation, such as nicotine replacement therapy or antidepressants. This study investigates potential effect of Meclezine-B6 combination; and B6 tablets administrated orally for possibility of reducing number of cigarettes smoked per day during 10 days. Methods: Using placebo control study. In which adult smokers' volunteers were assigned to one of study groups; control (N=20) or meclizine-B6 (N=50) and B6 group (N=50). All volunteers take their medications as single daily dose at night and the start to report number of cigarettes smoked daily from day 1 to day 10 with reporting the side effects appeared during the study. Results: The results showed there was significant declining in number of cigarettes daily smoked as compared with day 1 of study especially in B6 group. In This group, also higher percentage of volunteers showed significant smoking declining as compared to meclizine-b6 and control group. And most common side effects reported were drowsiness and headache especially in meclizine-B6 group. The potential role of B6 in smoking may require further evaluation using different doses. Conclusions: Oral administration of vitamin B6 as single daily dose of 50mg alone or in combination with Meclizine 25 mg may result in declining in number of daily cigarettes smoking; the effect will occur more when B6 was used alone rather than in combination of Meclizine.

INTRODUCTION: Cigarettes smoking is considered as risk factor and responsible for increased incidence of several diseases; that more prevalent among smoker than non-smokers, such as lung problems like COPD; lung cancer and cardiovascular diseases which may responsible for their premature death 1. Several medications are currently a available for trying smoking cessation, including nicotine replacement therapy; antidepressants (bupropion) 2, and other agents recently used like nortriptyline 3, clonidine 4 vernicline 5 and cysteine 6 all with variable rate of success.

Recently; Meclizine which is antihistamine used as an ant vertigo/antiemetic agent, specifically in the prevention and treatment of nausea, vomiting and dizziness associated with motion sickness 7 seems promising as a Potential Smoking Cessation Treatment according to the last clinical trial 8. Vitamin B6 or what is called Pyridoxine which is involved a coenzyme (co-factor) for many bio reactions including decarboxylation, transamination, racemization, elimination, replacement, and beta-group interconversion these reactions are required for macronutrient metabolism, neurotransmitter synthesis, hemoglobin synthesis and gene expression 9.

Some of Iraqi patients reported declining in the need for cigarette smoking when they used supplement of Vitamin B6 as tablets. The Novelty of this study is that the potential effect of Vitamin B6 on cigarettes smoking was not reported before even by FDA.

Aims of the study: Evaluate the potential positive effects of B6 alone and in combination with meclizine on number of cigarettes smoked during 10 days.

Each volunteer was asked to report number of cigarettes smoked and appeared side effects at the end of each day of trial. Data collection forma received from each volunteer after completion of ten days.

Reported Daily Cigarettes Smoking: As in Table 2, the reported number of cigarettes smoked during the study in all groups. There was a significant (p<0.05) declining in number of daily smoked cigarette in B6 group (p value = 0.025); while Navidoxine-B6® group and control groups there was not. (P value = 0.73 for control; and=0.126 for Navidoxine-B6®). The changes in daily cigarettes smoking is clear in Fig. 1.

FIG. 1: SHOWS CHANGES IN THE DAILY REPORTED NUMBER OF CIGAR SMOKED IN STUDY GROUPS. THE DECLINING WAS CLEAR IN B6 GROUP

TABLE 1: AGE; SMOKING YEARS; AND AVERAGE NICOTINE AND TAR CONCENTRATION PER CIGARETTE; FOR ALL GROUPS OF THE STUDY. SOME OF DATA EXPRESSED AS MEAN± STANDARD DEVIATION

TABLE 3: COMPARISON BETWEEN THE REPORTED NUMBERS OF CIGAR SMOKED IN DAY 1 AND DAY 10 OF STUDY. DATA EXPRESSED AS MEAN± STANDARD DEVIATION

FIG. 2: SHOWS DIFFERENCE BETWEEN NUMBER OF CIGARETTES SMOKED IN 1ST AND 10TH DAY IN ALL STUDY GROUPS. IN WHICH THE DECLINING WAS CLEAR IN B6 GROUP 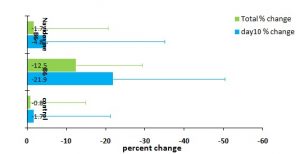 FIG. 3: SHOWS TOTAL AND DAY 10 PERCENTAGE OF CHANGE IN REPORTED DAILY CIGARETTES SMOKING AS COMPARED WITH BASELINE VALUESFOR ALL STUDY GROUPS. IN WHICH THE GREATER PERCENT WAS SHOWN IN B6 GROUP

Percent of Positive Outcome: As in Table 5; Significantly (p<0.05) greater percentage of volunteers have positive outcome (measured as declining in number of cigarettes smoking) was in the B6 group as compared with control and Navidoxine-B6®group: where it was in day 10th (76% vs 50% control & 60% Navidoxine-B6®) and when total change was measured (80% VS. 60% control and 58% Navidoxine-B6®).

TABLE 4: COMPARISON BETWEEN PERCENT DECLINES IN CIGARETTE SMOKING MEASURED IN DAY 10 AND AS TOTAL CHANGE IN ALL STUDY GROUPS WHEN COMPARED WITH BASELINE VALUES. DATA EXPRESSED AS MEAN± STANDARD DEVIATION

TABLE 5: COMPARISON BETWEEN NUMBER AND PERCENTAGE OF VOLUNTEERS SHOW POSITIVE OUTCOME (DECLINING IN NUMBER OF CIGARSMOKING)

TABLE 6: INCIDENCE OF SIDE EFFECTS REPORTED BY GROUPS OF VOLUNTEERS DURING THE STUDY

DISCUSSION: The data of this study clearly show significant decline in the number of daily cigarettes smoked specially in B6 group, this decline was more obvious in the last days of study. This may be related to some similarity in effect of pyridoxine; which is converted to active Pyridoxal phosphate that’s involved as coenzyme for number of decarboxylases enzymes used in the synthesis of monoamine neurotransmitters such as serotonin, dopamine; gamma - aminobutyric acid, and norepinephrine 10. Supplement of pyridoxine may elevate the brain level of these neurotransmitters, except norepinephrine 11. These effects may have some similarity to the action of nicotine in brain; where nicotine of cigarettes produces complex effect on CNS.

It effects release of many of neurotransmitters in various regions of brain; such neurotransmitters included dopamine, serotonin and glutamine 11, 12. In Navidoxin-B6® group; Although Meclizine alone looking promising 8. This combination of B6 with Meclizine has less effect on number of cigarettes smoked and on percentage of positive effect as compared with B6 alone group. This declining in effect may be related to antihistamine side effects of Meclizine that including dizziness and drowsiness; headache and reduced mental activities 13 where these are most common side effects reported in this study; as in Table 6.  Probably; Meclizine led to impairment in mental activities; smokers tried to restore some alertness by increasing consumption of cigarettes, where nicotine of cigarettes helps increasing mental alertness 14. This probably the cause which led to low activity of Navidoxin-B6 against smoking.

CONCLUSIONS: Oral administration of Vitamin B6 as single daily dose of 50mg alone or in combination with Meclizine 25 mg may result in declining in number of daily cigarettes smoking; the effect will occur more when B6 was used alone rather than in combination of Meclizine.

ACKNOWLEDGEMENT: For All my students that help me in this study.

CONFLICT OF INTEREST: There was no conflict of interest in this article.